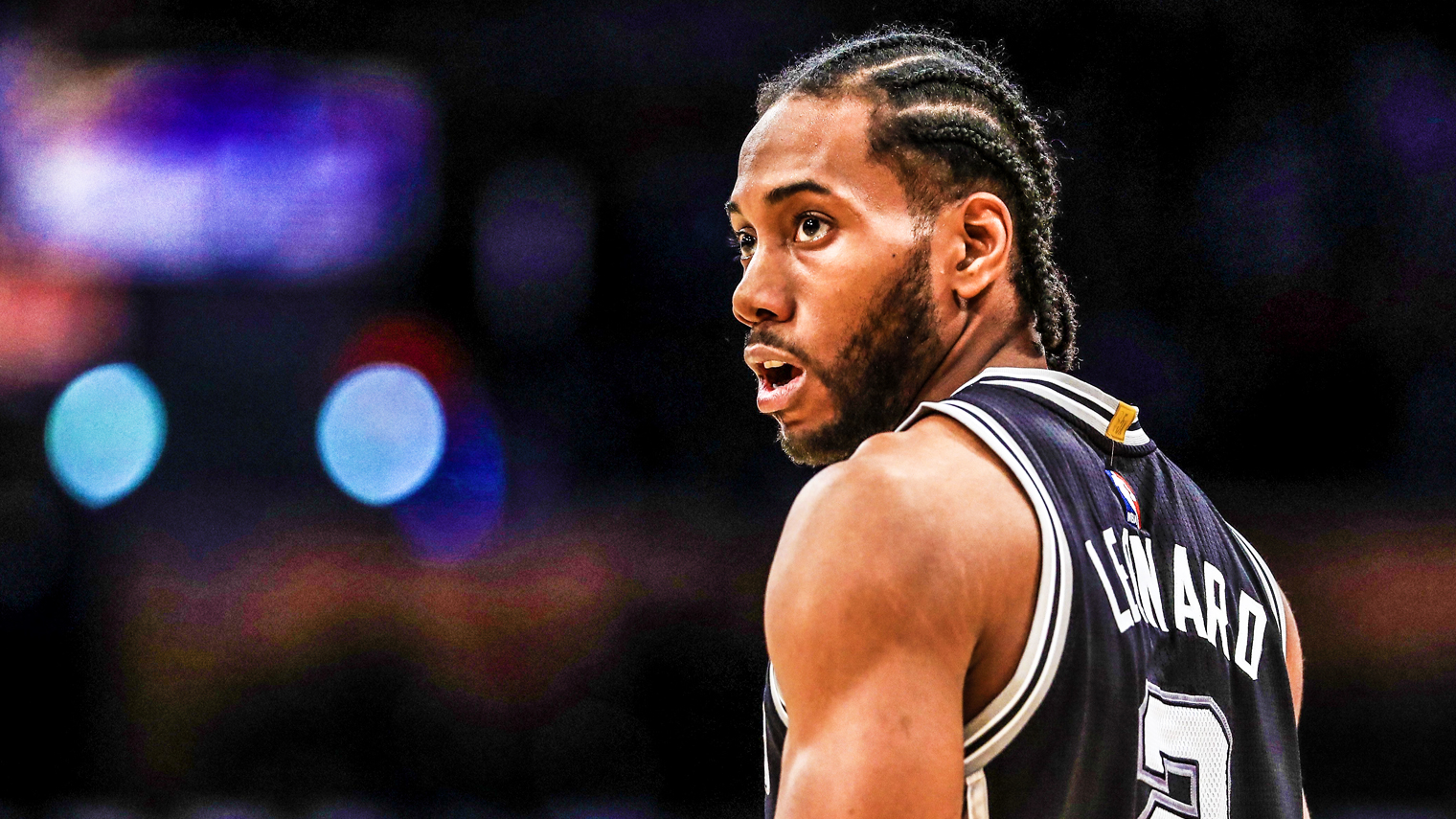 Should The Boston Celtics Trade For Kawhi Leonard?

A rift between Leonard and the Spurs organization was first rumored in January. A month later, Spurs’ head coach Gregg Popovich said he’d be surprised if Leonard plays again this season. After a long silence, Leonard told reporters last month that he ‘hopes to return soon’ giving a sigh of relief to the Spurs and their fans. But last week, the Klaw returned to New York, where he spent an extended period ( prior to the All-Star break ) to rehab his injury.

Then this week, rumors of ‘vultures circling around the Spurs’ for a posible Leonard trade came up. Now there are talks about the Boston Celtics emptying their closet again to get the Kawhi Leonard deal. ESPN’s Jalen Rose talked about it. Now Chris Mannix says that the Celtics may have the best deal for Kawhi.

The Kawhi to Boston deal is based on the presumption that Boston will arrange a trade package that will include either or both of Jaylen Brown and Jayson Tatum.

Why The Celtics should trade Jaylen Brown? 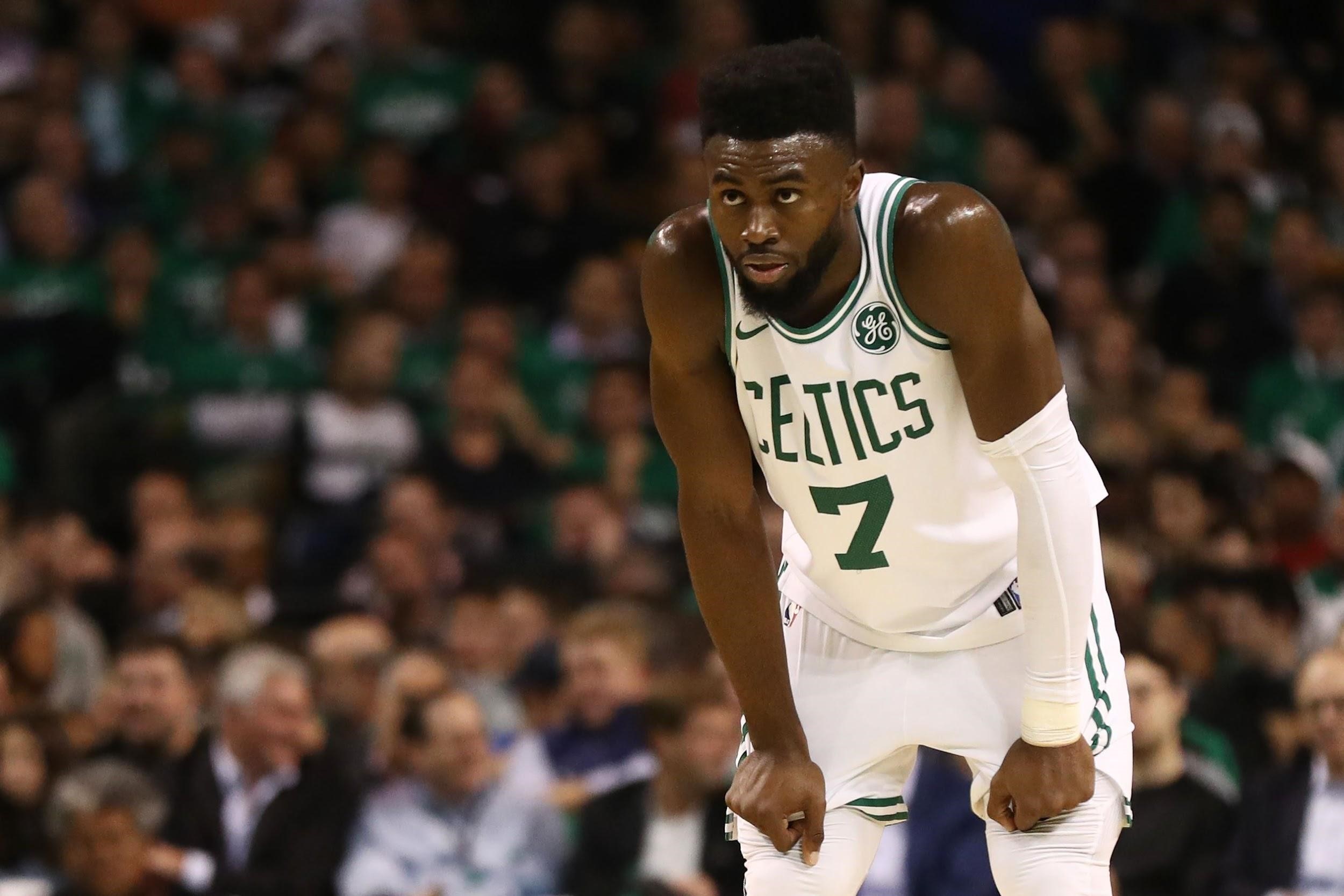 Jaylen Brown is having a breakout 2017-18 season. The 3rd pick of the 2016 NBA Draft has seen his rookie numbers double. Brown is currently averaging 14.2 points, 5.1 rebounds, 1.6 assists and 1 steal per game this season for the Celtics while starting all 66 of the games he’s played this season.

But remember that the reason why Brown’s numbers have significantly increased this year is Gordon Hayward’s absence. Hayward was supposed to be Boston’s starter at shooting guard but since his injury, Brown has filled in for that role very nicely. However, with Hayward set to return next season, Brown will be relegated back to the bench.

Given his performance this year, Brown deserves every minute of his current playing time. But because Hayward will command majority of the minutes, Brown may see his growth slow down next season. Having said that, getting traded to a team where he can start may be the best career option for Jaylen Brown.

As for Hayward’s back-up, the Celtics still have Marcus Smart on hand and should they decide to deal Brown for Kawhi Leonard, then they must avoid including Smart in that package. Instead, they could sweeten that deal by adding point guard Terry Rozier instead. Rozier has been spectacular in Kyrie Irving’s absence but with veteran Shane Larkin also playing well, dealing Rozier won’t hurt too much, especially if you’re getting a Top 5 player like Kawhi Leonard.

Why Not Jaylen Brown? 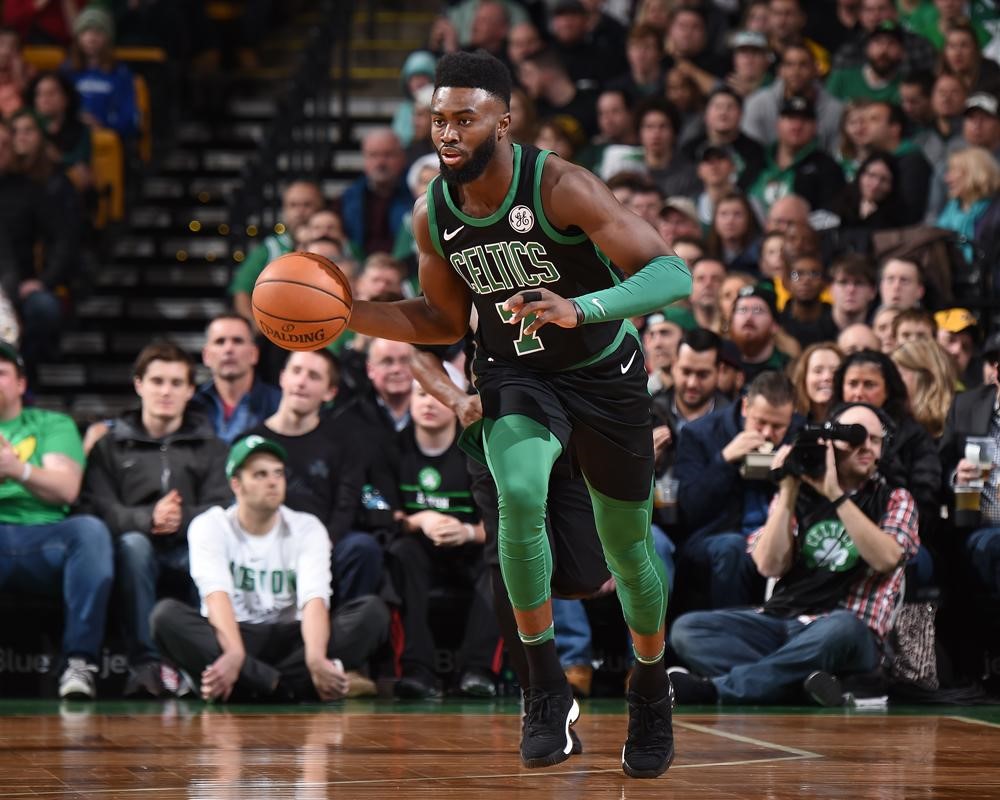 We know that Kawhi Leonard is only 27 years old and anytime you get a chance to acquire a two-way franchise payer at that age, you’ve got to seriously consider making that deal. But remember that Jaylen Brown is only 21 years old and already has two NBA seasons under his belt. This kid is so good, there is no where for him to go but up, if he avoids injuries.

Brown is six years Leonard’s junior and while he doesn’t have Kawhi’s skillset yet, you bet he’s going to be somewhere around that level when he becomes 27. Brown has excellent athleticism and length. On the court, he can shoot from three ball and can finish around the basket even with contact. No doubt he is going to be a future star if he stays healthy.

Aside from the nasty fall he suffered against the Timberwolves last March 8 that led to him being placed in the league’s Concussion protocol, Jaylen Brown has also been very healthy. He missed only four games last season and only five this season, not including the six games he missed as a result of that concussion.

On the other hand, Kawhi Leonard has missed most of this season with a quad injury that he’s had since the previous campaign. We know he’s recuperating with the best specialists out there but nobody can guarantee that he will return to his old form. Likewise, Leonard has also played at least 70 games in a season only twice in his six year career. So while he is only 27, he’s missed a significant amount of games throughout his career due to injury. So while Leonard will be an impressive piece, there is an element of risk if they give up Jaylen Brown for him.

Why The Celtics Should Trade Jayson Tatum? 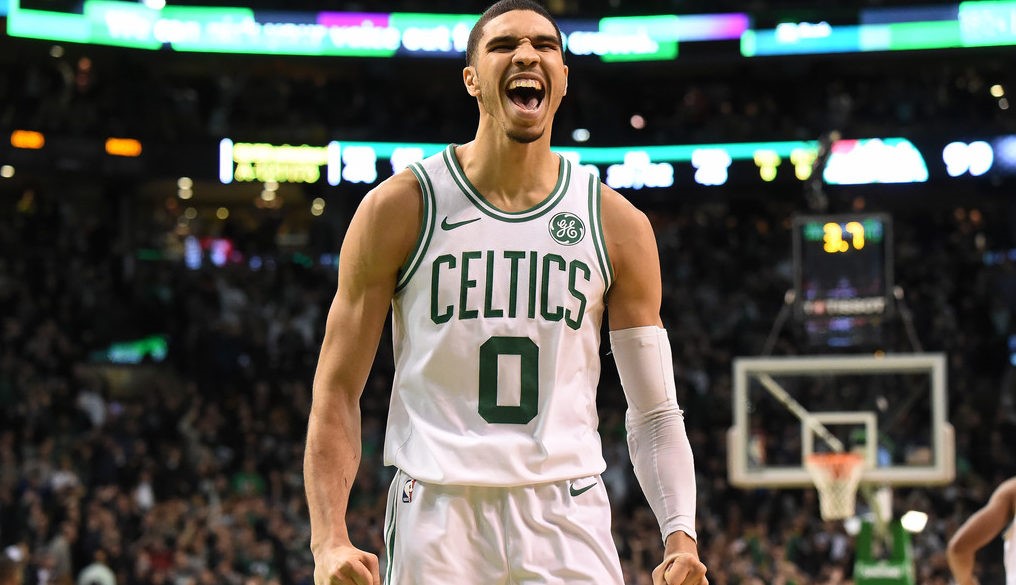 Among the Celtics young pieces, Jayson Tatum probably has the most trade value. Not only does he possess tremendous upside as a basketball player, Tatum is only owed just $6M next season. Anytime the Celtics want to include a big contract like Al Horford’s in a trade, they can always attach Tatum’s small financial value contract along with it.

Tatum’s ability to handle the ball, shoot from the perimeter and make the right passes also makes him an ideal fit for Gregg Popovich’s basketball system. If the Spurs would indeed be making Leonard available via trade, a guy like Tatum is probably the kind of player Pop would prefer getting in return.

Compared to a young Kawhi Leonard, Tatum may be better and given Popovich’s guidance in San Antonio, he could easily replace Leonard as the team’s franchise player. While he may not become the same elite defender as Kawhi is, Tatum’s offensive prowess makes up for that.

Losing Tatum would not matter much anyway because Jalen Brown is developing into an equally excellent wing man. Brown and Tatum somewhat play alike so Jalen can easily take Jayson’s spot in the Celtics’ rotation and Boston would not miss a beat. Getting Leonard in return would give them a different player, one they don’t have on their line-up. 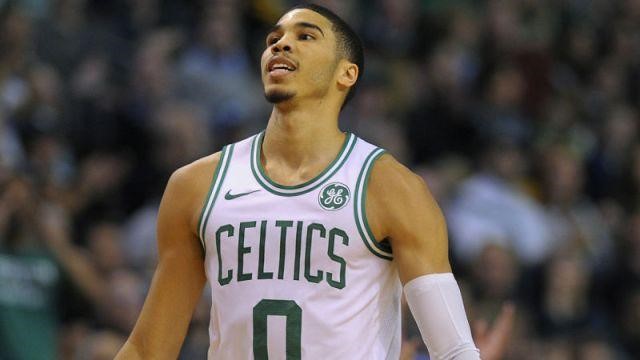 The Celtics drafted Jayson Tatum third overall in the 2017 NBA Draft but even if the Celtics kept the top pick, they would’ve still picked Tatum over Markelle Fultz and Lonzo Ball. The reason behind that is that Tatum isn’t your average rookie. He is wise beyond his years in the basketball court and his game has improved leaps and bounds since Danny Ainge first saw him at the 2016 Nike Hoops Summit.

Back then and even during his one and done season at Duke, Tatum’s perceived weakness was his lack of perimeter shooting. But during the period between the end of his college career and pre draft workouts, Tatum worked on his outside shot by taking 250 three pointers per day with the hopes of proving to NBA scouts that he’s working hard on his shortcomings.

With one week to go in his first NBA regular season, Tatum is tied for 8th in the entire NBA in three point shooting percentage and leads all rookies in that department at a .429 clip. That’s not bad at all and in fact it’s impressive considering he shot just .342 from the closer collegiate three point line. That strong desire and work ethic to improve his game coupled with Tatum’s maturity inside the basketball court made the Celtics fall so deep for him in the draft.

But those intangibles are just the bonuses. Tatum is a very gifted offensive player who can create his own shots and finish strong. He has exceptionally good handles for a 6-8 guy and his improved three point shooting makes him a more dangerous threat. On defense,Tatum has the length to be a stopper and given his athleticism, he can be a great defender like Leonard in the near future.

Tatum may not be Kawhi Leonard but he fills a big need for the Celtics. Not only does he provide Boston with plenty of length at the wing position, he also offers them a scoring threat outside the guard positions. Leonard’s talent is unquestionable but how he fits with the Celtics, that part of it Brad Stevens will still have to work on. Knowing Stevens, he’ll work it out. But with Tatum, it’s going to be much easier because of the continuity. 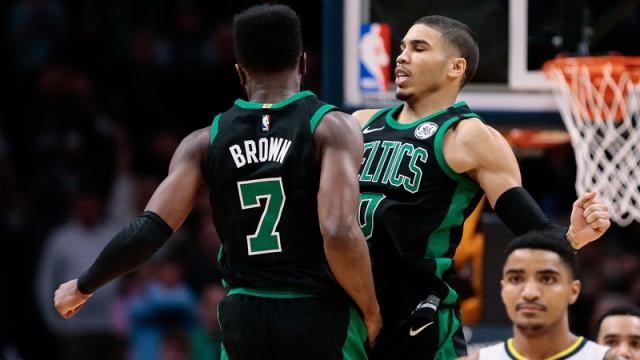 Getting an established player like Kawhi Leonard is a fantastic prospect for any NBA team, including the Boston Celtics. But given his recent injury history, he may be more of a risk than a reward for a younger team like the Celtics.

There is no questioning Kawhi Leonard’s skills and talents. Without doubt, he’s a Top 5 player in the NBA. But Brad Stevens’ system isn’t about having superstars. It’s about having a group of players who play well with each other on both ends of the floor.

Boston is one of the NBA’s best defenses this season and when Hayward returns, their offense should be among the league’s best too.It may sound too cocky but the Celtics don’t really need Kawhi Leonard right now. What they need to do is keep the current team and continue growing it.

Come to think of it, when Boston has Hayward back next season, they will be a very different team So it’s just like they are getting a max free agent in the summer without really adding one. That’s dangerous for the rest of the league.