Should The Lakers Keep Julius Randle?

It’s been long rumored that the Lakers are planning to splurge in the 2018 offseason to bolster their line-up and put them back to elite level status. According to the rumblings, the Lakers intend to add two maximum salary free agents this summer. The names that have repeatedly come up in those rumors are none other than LeBron James and Paul George.

James has a history of leaving in free agency. In 2011, he left the Cavaliers for South Beach to chase a world title with the Miami Heat. He won two there and then returned to Cleveland as a free agent in 2015. James led the Cavs to their first ever NBA title in 2016 but he is going to be a free agent again this summer. The King has not committed to playing for the Cavs beyond this season, sparking rumors that he may be leaving again.

Before Paul George was traded to the Oklahoma City Thunder, there were rumors that the California native was eyeing a homecoming by playing for the Lakers. Since George has been in OKC, he’s hinted that he may stay there for good. But given the team’s inconsistencies and their inability to play to the best of their abilities, PG13 may consider leaving this summer when he becomes a free agent.

A King James and PG13 tandem would be a tremendous one-two punch for the Lakers who have been struggling to return to the playoffs in the post-Kobe Bryant era. Los Angeles has missed the playoffs in the last four seasons and have not won a playoff games since 2013. 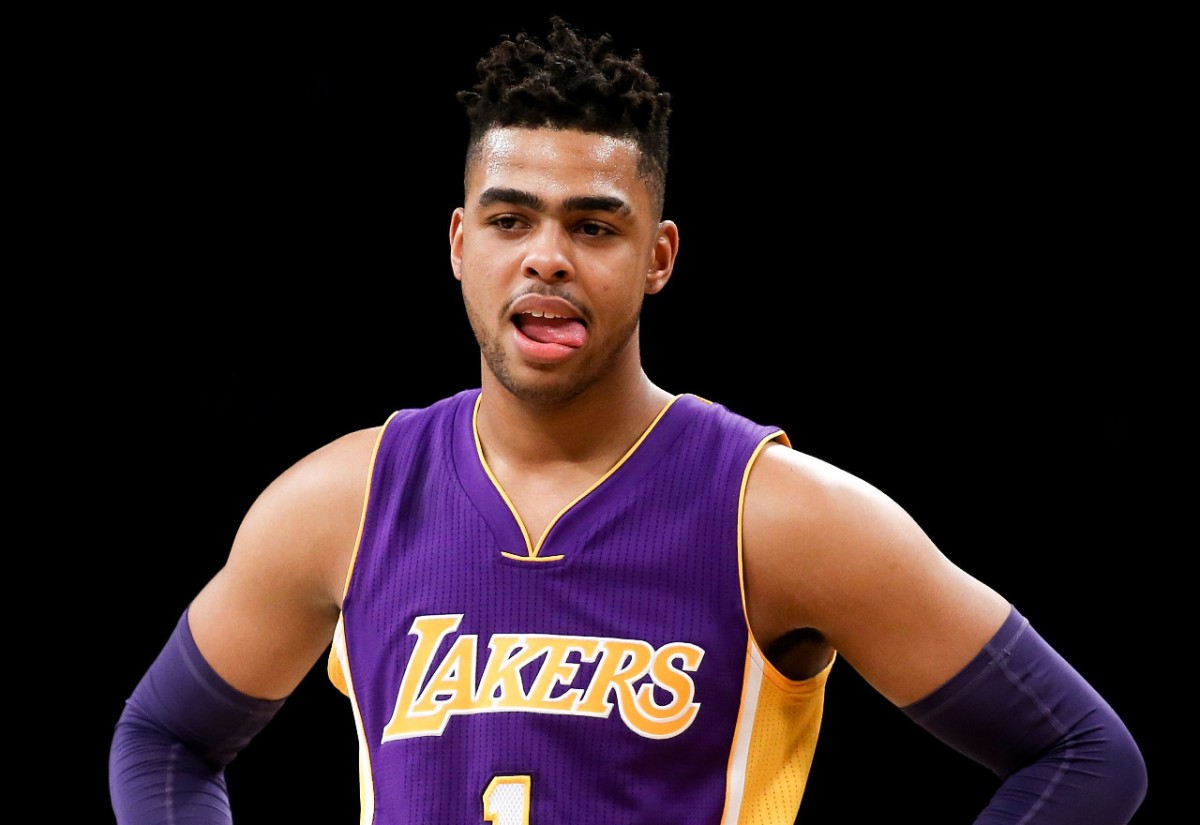 The Lakers started to unload big contracts last summer, dealing D’Angelo Russell and Timofey Mozgov to the Brooklyn Nets. They continued to shed more salaries at this season’s trade deadline by acquiring the expiring contracts of Isaiah Thomas and Brook Lopez in exchange for Larry Nance Jr. and Jordan Clarkson.

But these moves aren’t enough. The Lakers need to do a couple more additional moves to create the space they need. These moves include getting rid of Luol Deng’s contract and letting go of forward Julius Randle. While Deng is an easy decision, Randle’s case is interesting.

The former Kentucky Wildcat has long been a trade target since this story of the Lakers splurging in next summer’s free agency market. Randle was the Lakers’ 7th overall pick in 2014 and while he has shown flashes of brilliance in the past, he hasn’t been able to deliver consistent numbers for his team.

But after this season’s trade deadline, Randle has suddenly blossomed into the player that the Lakers envisioned he would be when they selected him 7th overall in the 2014 Draft. He’s averaging 21.2 points, 10.1 rebounds, 4.1 assists while shooting at a .597 clip in the Lakers’ last 10 games.

Randle has particularly delivered in the Lakers’ last two wins which are probably their best wins of the season. He scored a career high 36 points, grabbed 14 board and issued 7 dimes in the Lakers’ 127-113 win over the Cleveland Cavaliers on March 11 and followed that up with a 26 points and 13 rebounds effort in a112-103 victory over the Denver Nuggets two nights later.

Randle’s solid play has put the Lakers’ front office in a dilemma because for their two max stars plan to come to fruition, they would have to renounce their rights to the 6-9 forward who becomes a restricted free agent at the end of the season.

With Randle playing this well though, do the Lakers keep him instead of getting that second max free agent? Or can they get two max free agents and still re-sign Julius Randle? 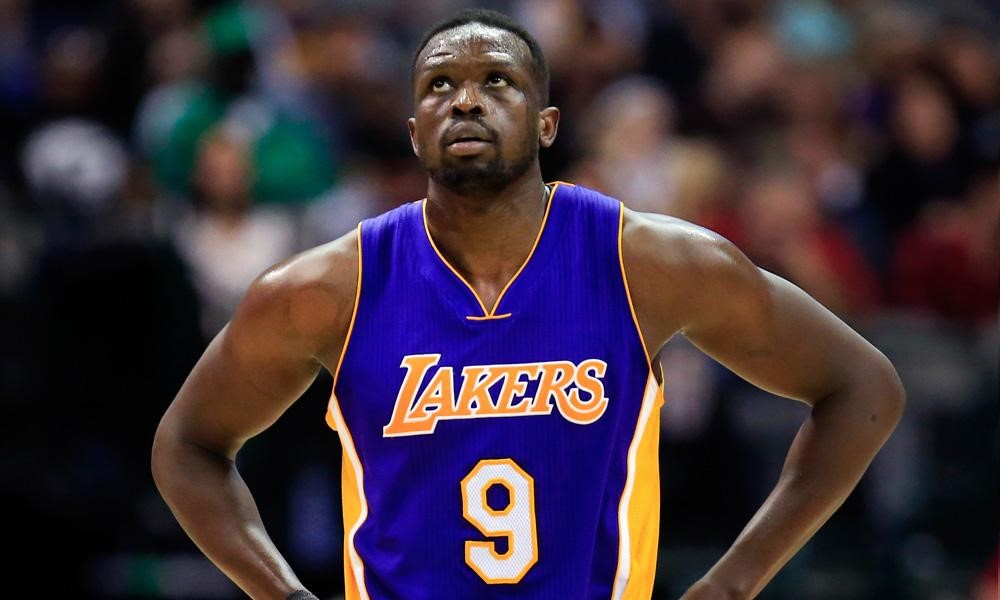 Now, the $39.14M includes the $18M cap hold on Luol Deng. Deng is still owed $36.8M by the Lakers for two more seasons. The first thing that comes to mind here is shipping put Deng without getting anyone in return. That way, the Lakers free up another $18M in salary space.

Getting a taker won't be easy, given Deng's court value and expensive contract. So the Lakers must make a package that will entice the other teams to be recipients of the salary dump. This could mean a couple of first rounders, a combination of a future first round pick and Kyle Kuzma, A first round pick, Josh Hart and a 2nd round pick.

The Lakers have a history of trading picks when they acquired Steve Nash. And they might not want to mortgage their future again. But between that and giving away either Kuzma or Hart ( or both ), keeping the latter looks like the better choice. Kuzma and Hart have shown plenty of promise. And if they, along with Randle, Ingram and Ball can grow together, maybe Los Angeles has something special.

If they can't trade Deng, Los Angeles also has the option to use the stretch provision on Deng’s contract. Under this provision, the Lakers can minimize Deng’s cap hold by stretching it over a longer period of time. In the case of Deng, the Lakers can stretch his cap hit to five years ( twice the term of the remaining contract plus one year ). This means if the Lakers avail of this option, Deng will only be a $7.3M hit on the Lakers beginning 2019 but until 2023. How the Lakers get rid of Deng is crucial in keeping Randle's $12.5M hold and getting two max stars. But even then, retaining Randle would be tricky. 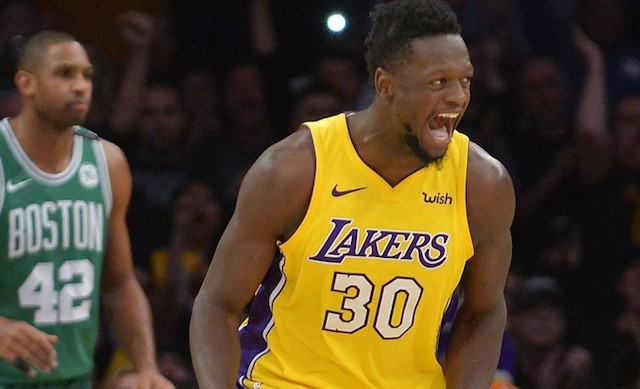 Since he will be eligible for free agency, Randle can sign an offer sheet with another team on July 1, 2018. The. The Lakers then have 48 hours after the July 6 moratorium period to match the offer and keep him. But imagine a scenario where Randle signs an offer sheet and the two max free agent targets have not yet made up their minds on July 8th. Do the Lakers just let Randle go while waiting for the FAs. Or do they just keep Randle first and work from there? Without the guarantee from the two max FAs, the Lakers can't afford to let go of Randle, not especially with how good he has been playing as of late.

But if the Lakers sign Randle and the two max free agents commit afterwards, one or both of them will have to agree on some pay cut, especially if Randle is signed more than his cap hit. Given that other teams will be going after Randle, expect the Lakers to keep him at a premium and that's going to make the situation more tricky for the two max FAs.

Good thing for the Lakers is that July is still four months away. They have all the time to evaluate their options. But given the possibilities and the current situation, perhaps,it's best that the Lakers make Julius Randle their priority. Once they secure the big man, then they splurge with whatever they have left in their financial arsenal.

The Lakers are having their best season in years. And they've done it with their going core. They have the talent and that talent is starting to come along even with a not 100% Isaiah Thomas as their leader. Look, Thomas is a great player but with his defensive limitations, the Lakers can't build around him. That'd another story though.

What we are saying is that Los Angeles doesn't need to add two max free agents this summer. They only need one. If it were still November 2017, maybe LeBron James and Paul George wouldn't play for a young team like the Lakers. But with how their young team has come around lately, both should leading the young crew both interesting and appealing. Especially if the Lakers keep the much improved Julius Randle.