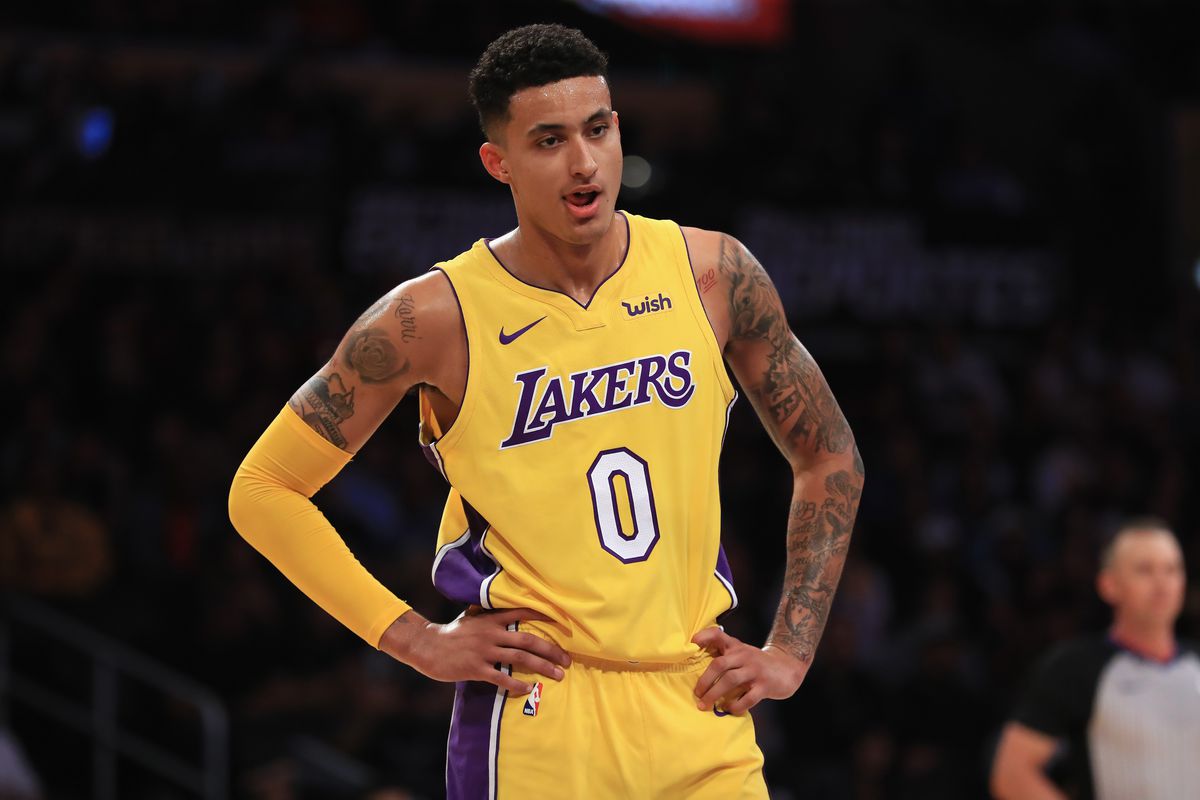 So Far, It’s Been Kyle Kuzma Starring For The Lakers

The buzz in Los Angeles is about Lonzo Ball and his Big Baller Brand shoes. But the name that’s starting to emerge in Tinseltown is Kyle Kuzma.

While Ball continues to be sidelined with an ankle sprain, Kuzma has been making waves and turning heads. Not only is Kuzma playing like a lottery draft pick so far, he’s been performing like a future All-Star. And while it’s still too early to make a conclusion, he’s gotten better by the day, showing different facets to his game.

A Trade By Product 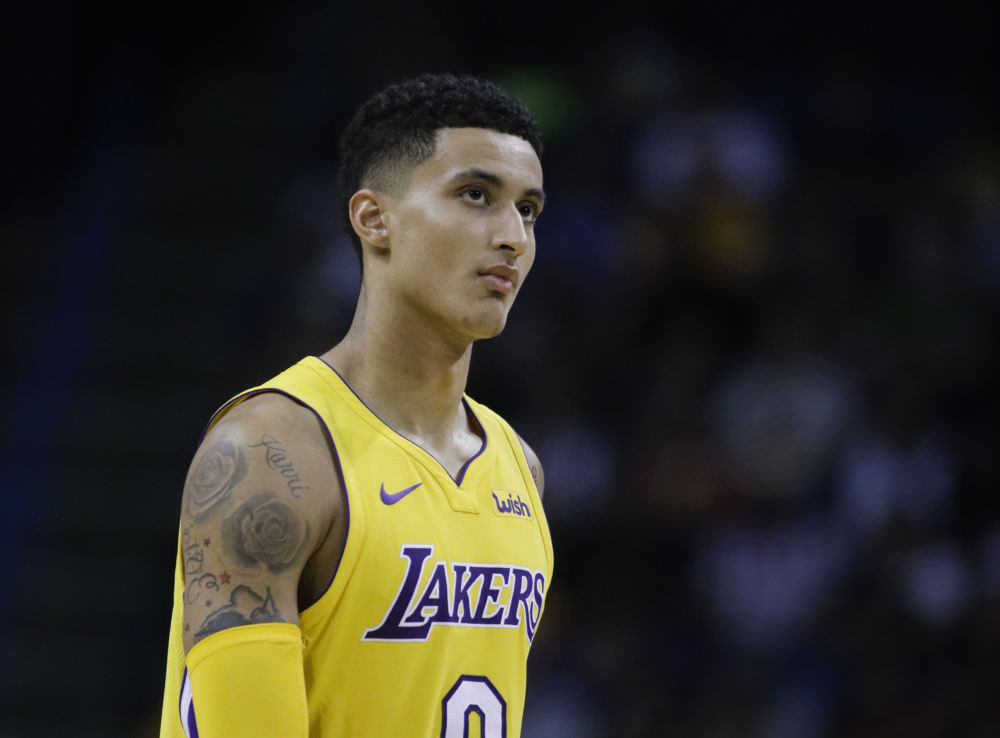 While Rob Pelinka did backflips when Kuz was still available at #27, the 6-9 forward from the University of Utah was initially thought to be part of a future master plan rather than an immediate impact player. Instead, Kuzma has punched his ticket to the big show right off the bat. 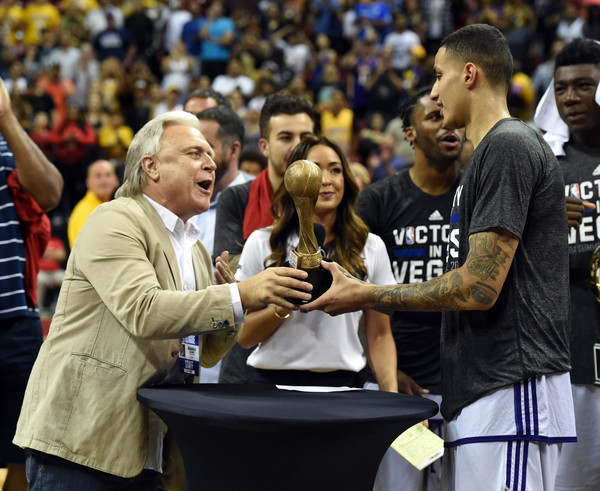 Kuzma earned a spot on the Lakers’ roster with an impressive performance during the 2017 Las Vegas Summer League. Kuzma averaged 21.9 points, 6.4 rebounds and 2.7 assists. He was also named as the Summer League Finals MVP after scoring 30 points ( including 6-10 on three pointers ) and grabbing 10 rebounds during the Finals.

When training camp began, Kuzma was supposed to be playing for a spot on Luke Walton’s rotation. Four games into preseason, he looks like he’s about to earn a starting role. Kuzma continued to make his case on Sunday as the rookie forward played a key role in the Lakers’ 75-69 win over the Sacramento Kings in preseason.

Poise Down The Stretch 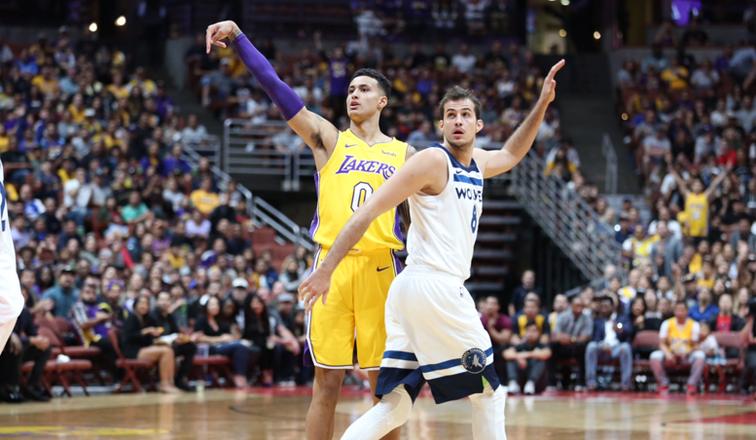 Kuzma didn’t have a good day from the three point distance as he shot just 1-6 from downtown. But overall, he shot 6-12 from the field, scored 16 points, grabbed 8 rebounds, issued 3 assists and blocked 1 shot in 27 minutes of action. More importantly, Kuzma showed a lot of poise down the stretch when the Lakers needed him the most.

From a 64-all tie, Kuzma was part of the Lakers final 11 points. Aside from scoring the team’s final two baskets, Kuzma added two free throws and dished off the two assists from the other Lakers baskets during that stretch. As a result, Los Angeles broke free from a 64-all deadlock to win the game 75-69. 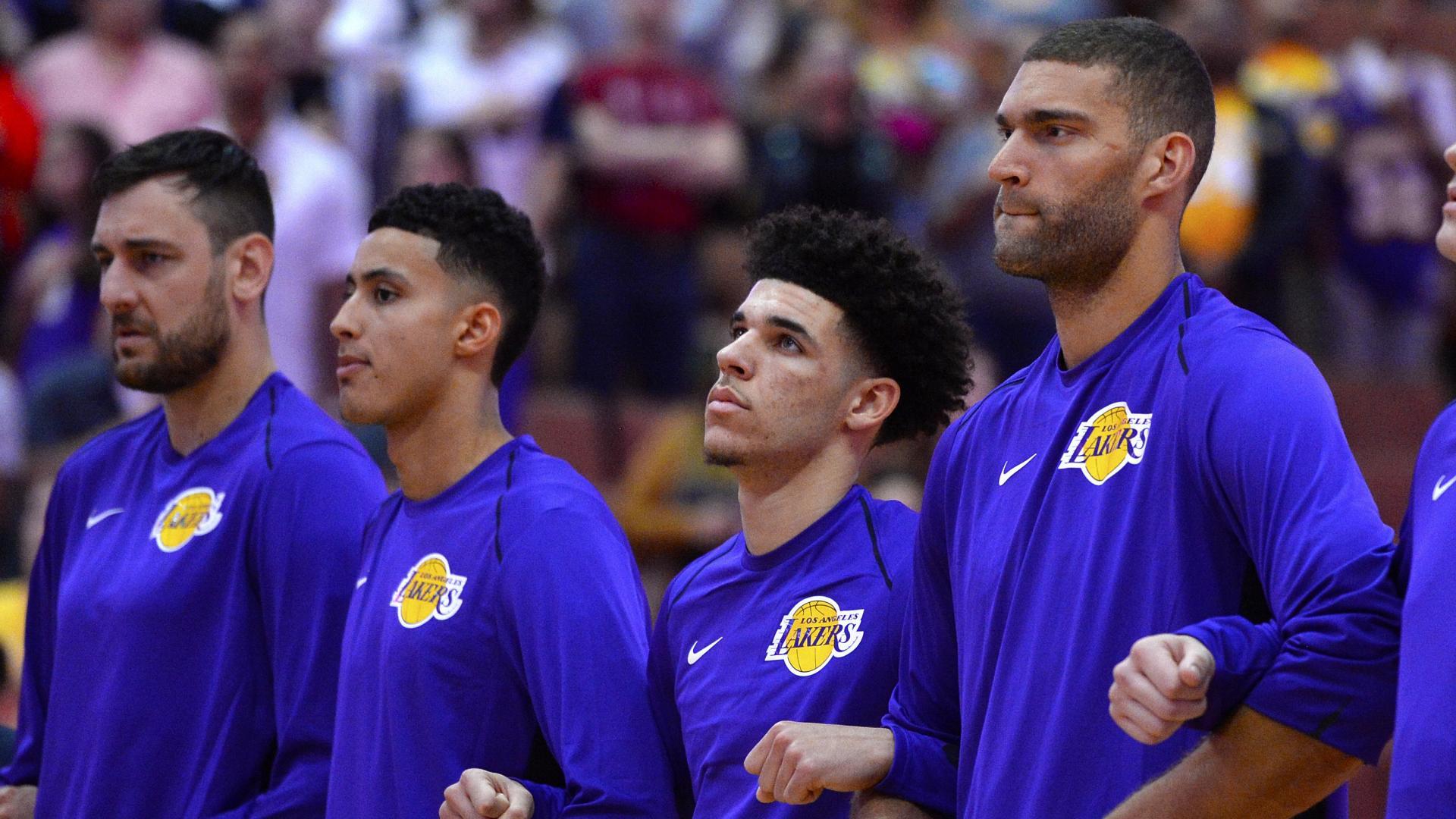 It was the Lakers’ first win in this pre-season and they did it without prized rookie Lonzo Ball who didn’t play for the second straight game with a sprained ankle. Much hype has been on Ball and his once in a lifetime passing skills. But if Lonzo outshone Kyle Kuzma in the Summer League, the preseason has so far been a no-contest.

Ball had a decent first game with 5 points, 7 rebounds, 8 assists and 2 steals but he hobbled out of his second game with just 4 points, 2 rebounds and 4 assists. The ankle sprain forced him to miss the Nuggets game on October 4 and Sunday’s game against the Kings. 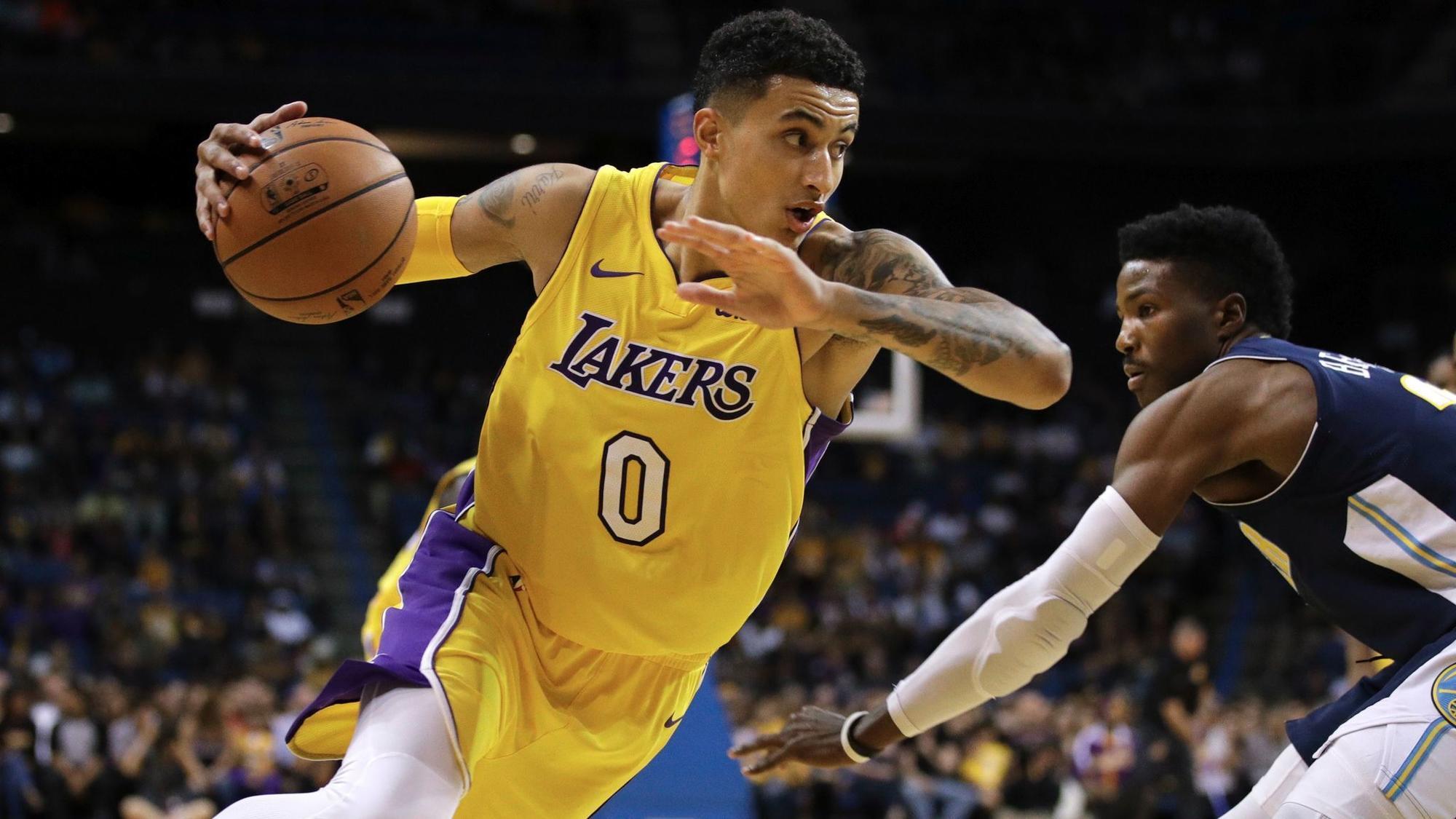 Meanwhile, Kyle Kuzma has played like a veteran star, piling up the points and scoring them with efficiency. In four games and 27.5 minutes per outing, Kuzma is shooting 62% from the field ( 31-50 overall ) and 39% ( 9-23 overall ) from three point distance while averaging just 1 turnover per contest. 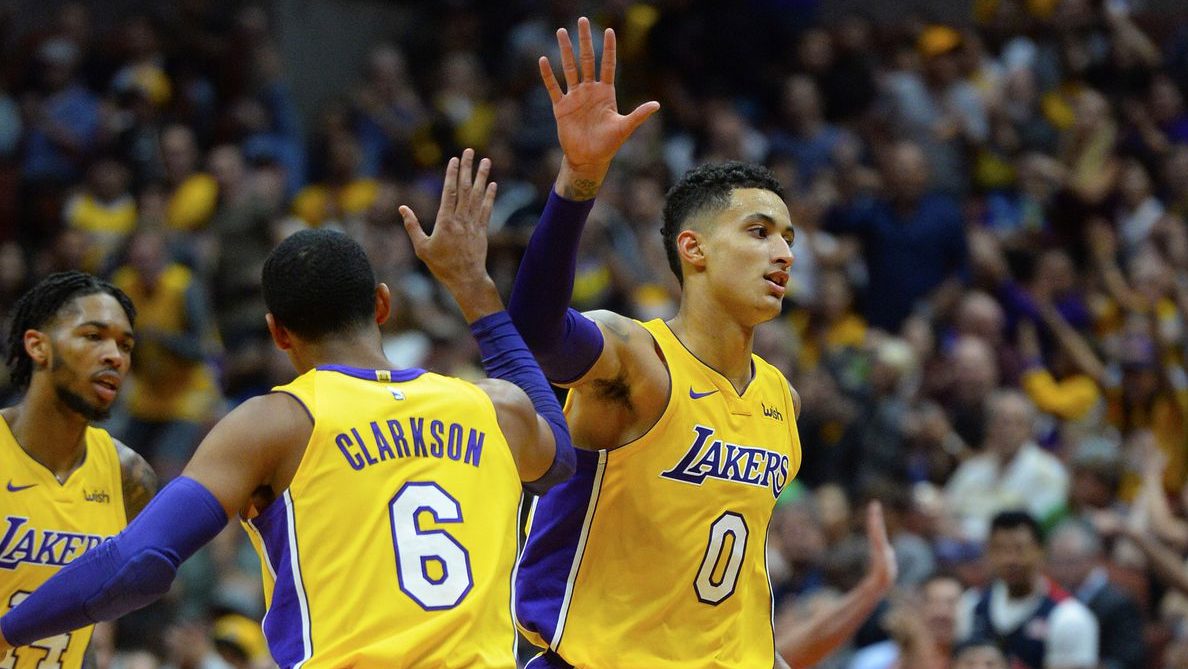 What has most impressed the experts so far is Kuzma’s ability to knock down the NBA three pointer. In three seasons at the University of Utah, Kuzma shot just 31.2% from the three point area. But after shooting 4-5 from the NBA three point line during the NBA Draft combine, Kuzma has been lights out.

Kuzma torched the nets by going 24-50 (48%) on his three pointers in the 2017 Las Vegas Summer League and then proceeded to drill in 8-17 ( 47.1% ) of his triples during his first three game in the pre-season. Of course, he was just 1-6 on Sunday against the Kings but overall, he’s been lights out from the farther professional three point line. 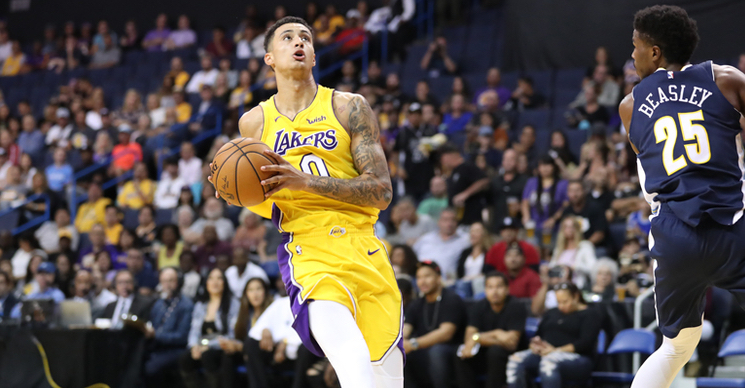 Using Kevin Pelton’s ( of ESPN ) model based on Kuzma’s first three preseason games, he is projected to be a 36.7% NBA three point shooter, slightly better than last season’s league average of 35.8%. Now that’s nowhere Stephen Curry pure shooting but given how he shot the three ball in college, Kuzma’s improvement in such a period of time is fascinating.

But it’s not only three point shooting that’s made Kuzma look like a diamond in the rough for the Lakers ( although it’s what’s going to earn him more minutes ). He’s displayed the full arsenal during the preseason. He can post-up, slash to the basket, finish on fast breaks and hit the midrange shots. And with the poise and ability to take over he showed against the Kings, he’s shown it all. No he’s not Kobe Bryant material, but he doesn’t look like a 27th pick either.

So Far, So Good 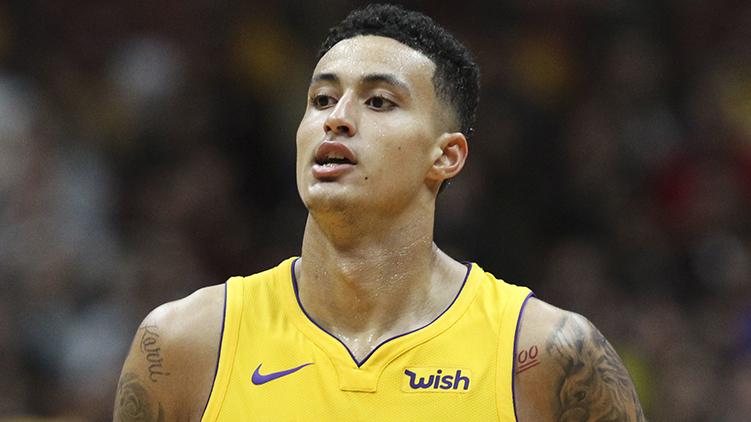 The jury isn’t out yet on Kyle Kuzma. The regular season hasn’t even begun. When that starts, it’s going to be a tough and physical grind which young players like Ball and Kuzma will have to adapt to. There will be very many games, tougher defenders to face and better offensive players to defend. But so far, so good for Kyle Kuzma.

Now the sample size on Kuzma is still too few to call him a legit NBA star already. But that’s not his fault. The games and minutes will come along with time. But in the short period of time that he’s played in the NBA level, he’s impressed and has continued to exceed expectations.