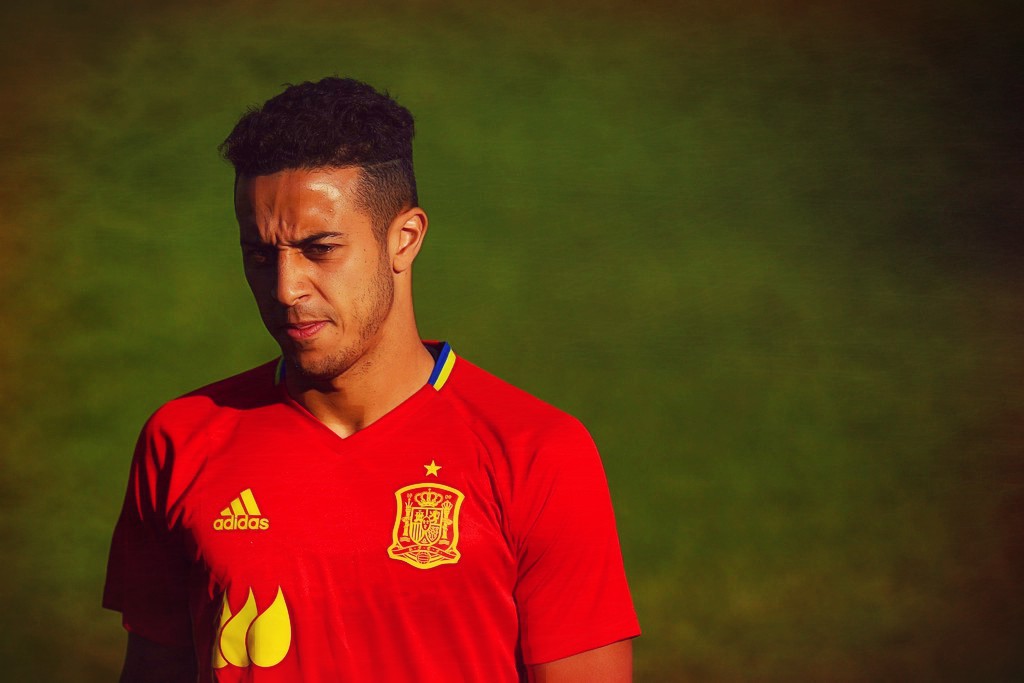 Thiago has been confirmed to play for the Spanish national team in the upcoming FIFA World Cup in Brazil this summer. Spain is regarded as Germany’s staunchest rival this year as they’re currently on the second spot of the World Cup power rankings.

However, they’re also the underdog to Germany who won the title in Brazil four years ago. In line with this, the 27-year-old Spaniard previously said that the underdogs can always emerge from the qualifiers.

But he also added that it’s a different story when you’re talking about the World Cup championship because the favorites are still the likeliest to win. In this case, it's Germany who's on top of the power rankings as well as in the betting odds.

This makes perfect sense though as Die Mannschaft annihilated the Brazilians 7-1 during the 2014 semi-finals — a huge achievement for a club that was touted to get eliminated in the qualifiers. What made things more surprising is that they furthered their rally and defeated Argentina 1-0, thereby winning the title and the trophy.

It was a major accomplishment for them, and up until now, these successes are what makes them overly-confident that they’ll get a possible back-to-back World Cup championship — a possibility that Thiago strongly believes.

However, the midfielder also added that luck still plays a big part in World Cup games. He cited Turkey and South Korea as examples, who both reached the semi-finals four years ago. Anything can happen, he said, implying that Germany shouldn’t feel too confident that they’re going to have an easy run this time around.

This is, however, despite his strong confidence that Die Mannschaft will have another run for championship contention. The Spaniard then and insisted that Germany has the biggest chances of winning the 2018 World Cup title.

It was an unexpected statement coming from a Spanish player who should have cheered for his club. Nonetheless, his words made sense. In fact, he just looked at the reality of the situation knowing that the German squad is packed with high-caliber players like Mesut Ozil, Manuel Neuer, Tony Kroos, and Leroy Sane to name a few.

Thiago continued and named his other favorites to make it to the finals. He said that Argentina, Brazil, and France might face Germany. Julen Lopetegui, the new manager of the Spanish national football team, had seen how the persistent 27-year-old played in 15 of the 18 games he overlooked.

Throughout these games, the former Barcelona goalkeeper saw the potential in Thiago and believed that he could bring La Roja to winning the World Cup this summer. But putting the Spanish national team aside, Thiago still persisted that his Bayern Munich teammates will have a pretty good time with their respective teams.

One of which is the Colombian James Rubio who captains La Tricolor. Thiago said that even though Colombia isn’t in the top ten of the power rankings, the country still has high chances of dominating the World Cup especially that Radamel Falcao plays for them.

He also acknowledged Belgium’s potential to make an impact in Russia with the help of Kevin de Bruyne who currently plays for Manchester City. Thiago explained that Belgium is an underrated team in the tournament because most people fail to realize that they play really good football with their simple but highly effective gameplay.
There’s nothing fancy or striking about the Red Devils, and that’s what makes them strong, he added. In fact, Thiago said that Belgium is one of his favorites to win the World Cup. All these statements come as a big surprise, knowing that Thiago Alcantara should speak positive remarks about his team, La Roja.

But don't get us wrong, because it's also pretty clear that all his recent statements are just proof that he's a legit sportsman and a professional one too. His work ethics go beyond "bragging" about the team he belongs to as he acknowledges the strengths of his competitors.

Perhaps all these might also just be a way for him to downplay Spain's strengths and make them seem like an underdog, so that when the game day comes, all will be surprised. That might be the reason behind his remarks, but we'll still never know.
What's sure though is that Spain is fully prepared for Russia this summer. Spain is surely not on the same page as they were a decade ago where they dominated international and European football. They even won all major trophies from 2008 to 2012, proof of their dominance in the sport.

However, all these came to a sudden end when the top guns of the club fled. What made things worse is that their lineup during the 2014 World Cup wasn't competitive enough. Fortunately, things have changed a lot since then, and the La Roja is now packed with some serious firepower.

There’s Thiago who's at the forefront of the Spanish offense, and there's David de Gea from Manchester United who’s more than ready to deny a couple of goals. Isco of Real Madrid and Atletico Madrid’s Koke are also fully-suited to strengthen La Roja’s defense.

Lopetegui’s squad is undoubtedly vying for World Cup supremacy, and it seems like they’re pretty serious about it. In another interview, Thiago cited Spain's strong points and said that they’re excited to see the results of their hard work during the early games of the qualifiers.

He also said that they dream big this year and that achieving their goals is easier because they've already shown that they can dominate their game as what happened when they finished ahead of Italy.

Thiago described his Spanish teammates to be competing at the highest possible level, implying that La Roja might deny Germany the World Cup title in Russia. He then continued and said that beating top-tier teams like Italy shows that they're fully prepared to defeat their opponents "with style."

He ended his statement by saying that they're confident they'll have a good time in Russia. However, he also said that he doesn't want to be too confident as this will just mess up their club's diligence.