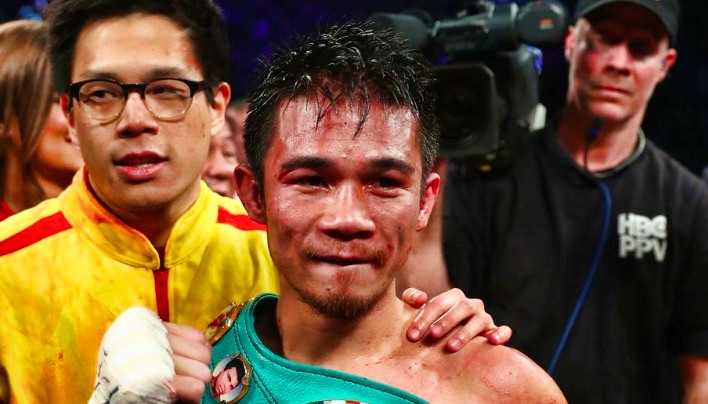 He used to work as a garbage collector in his native Thailand and story has it that because he was so poor, he sometimes had to eat food from the trash he picked.

But his life has suddenly changed, for the better. Two improbable victories over one of boxing’s pound for pound best fighters has led to a meteoric rise that has made him the Manny Pacquiao of Thailand. He has earned two invitations to visit his country’s Prime Minister. He is now acclaimed as one of the best boxers in his weight class and has earned the right to headline a fight card in the United States. And it all began with two wins over Roman ‘Chocolatito’ Gonzalez in 2017.

"This is a chapter of boxing history," Max Kellerman on Sor Rungvisai's KO of Chocolatito. #SuperFly pic.twitter.com/HzTwDrDqk6

Like in the first fight, Chocolatito was favored to win the rematch ( he was a -400 favorite in the second fight ). Experts believed that he would bounce back from the controversial loss in March and defeat Rungvisai convincingly. But the Thai fighter had other plans. He dominated the fight from start to finish. In the fourth round, Rungvisai landed a powerful right hook that knocked Gonzalez down.

Chocolatito was able to get back to his feet, but he was unstable. 30 seconds later, Rungvisai connected on another massive right hook that clipped Gonzalez on the chin like a hammer and sent him flat on his back in the center of the ring. Referee Tom Taylor didn’t even bother to count, he waved the fight off at the 1:18 mark of round 4.

The victory didn’t just erase the doubts of his first win over Roman Gonzalez. It also solidified his case as the best super flyweight in the planet. It also made him an even bigger star in Thailand and yes, it earned him a second audience with the Prime Minister of his country.

As for worldwide acclaim, it opened the door to the U.S. market and led to his first headliner on U.S. soil. The Chocolatito rematch was the headliner of ‘Superfly 1’ but at that time, it was such because of Chocolatito. This time around, it was all about Srisaket Sor Rungvisai.

During the Chocolatito rematch, former flyweight champion Juan Francisco Estrada defeated fellow Mexican and former world titlist Carlos Cuadras to earn the right to face the winner of Chocolatito vs Rungvisai 2. And so Superfly 2 was born. Srisaket Sor Rungvisai was penned to defend his WBC Super Flyweight title against Juan Francisco Estrada on February 24, 2018 at The Forum in Inglewood, California.

Estrada was no walk in the park. He is a former WBA ( unified ) and WBO flyweight champion. He beat Brian Viloria via split decision in 2013 to win both belts and he successfully defended his titles five times, beating former world champions Giovani Segura, Milan Melindo and Hernan Marquez in the process. In his audition bout, Estrada decisioned Cuadras, who is the last man to defeat Sor Rungvisai in the pro ranks.

True to its billing, Superfly 2 was all fireworks. Srisaket Sor Rungvisai and Juan Francisco Estrada turned in a classic. Rungvisai put on an early lead and withstood a late charge from Estrada to retain his belt via majority decision. The Thai fighter won via scores of 117-111, 115-113 and 114-114.

The Mexican opened strong, to the delight of the pro-Estrada crowd. But as the fight progressed, Rungvisai began to assert himself with head movement, counter punching and body shots. He was able to tag Estrada several times in the middle rounds. Estrada appeared to land better in some of the late rounds and both men raised their arms in victory after an all-out 12th round.

Proving His Worth Again

Sor Rungvisai and Estrada leaving it all on the canvas in an explosive Round 12. #Superfly2 pic.twitter.com/5qmwjeNwvU

Estrada protested the decision telling Max Kellerman after the fight to listen to the crowd’s displeasure. But the crowd reaction was all but natural as it was a predominantly Mexican audience. The 117-11 score wasn’t fair for a fight as close as theirs, but because Sor Rungvisai was the champion and Estrada was the challenger, the latter had the burden to win the belt beyond reasonable doubt. As challenger, he had to take away the belt and that obviously didn’t happen. While Estrada had his moments, so did the champion.

After the fight, Rungvisai was asked if he’d fight Estrada again. WIthout hesitation, he said yes to Max Kellerman. The fight was so good that there were already talks for a ‘Superfly 3’ this fall possibly at the Forum again. With a fight that went this close and two fighters who want to go at it again, there’s no doubt that it can be made again.

His critics can talk all they want right now. Rungvisai has been here before. He erased the controversy of the first fight with Chocolatito and made a statement in their rematch. You bet he’s going to aim for the same against Estrada. For a man who’s seen the worst in life, there is nothing better than another chance to prove his worth again.