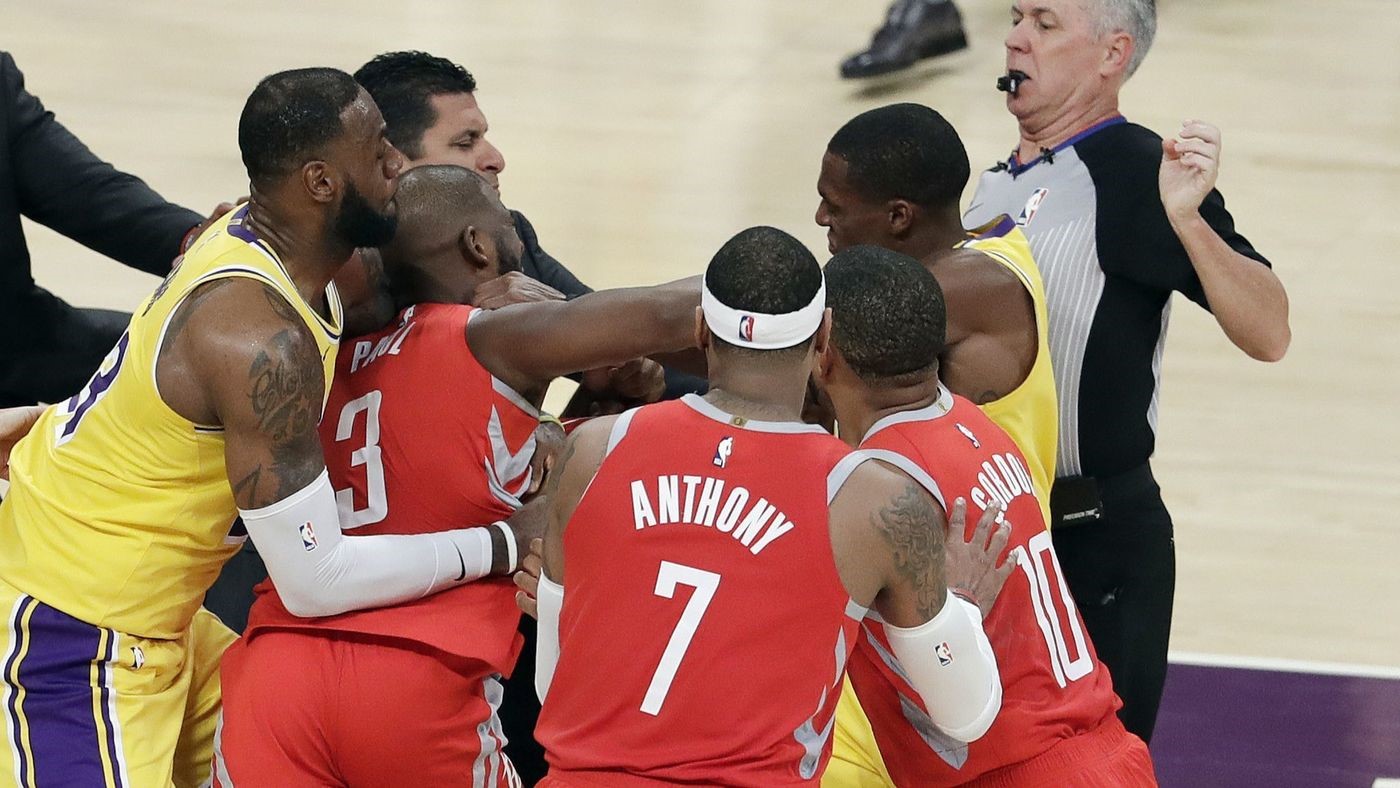 Suspensions Handed Out After Lakers-Rockets Brawl

The NBA handed out suspensions after Saturday’s brawl at the Staples Center during the game between the Los Angeles Lakers and the Houston Rockets.

The league announced on Sunday that Brandon Ingram, Rajon Rondo and Chris Paul have been suspended for their roles in the incident. Ingram, who started the whole thing, was meted a four game suspension for his actions. Aside from being the one who instigated the free for all, Ingram also came in at the end to throw a punch at Paul.

Suspensions For Ingram, Rondo and Paul

Rondo meanwhile was given a three game ban for his actions. Rondo threw the first punch of the fight and escalated the whole thing after he “spat” on Chris Paul’s face. Paul meanwhile was merely provoked by Rondo but he ended up throwing multiple punches at the Lakers’ point guard and making contact, hence he was also given a two game suspension.

Although his suspension is the shortest among the three players penalized for the brawl, Chris Paul stands to lose most in terms of salary. CP3 is set to lose $491,782 for the incident while Rondo will be fined a total of $186,207 and Ingram the least among the three at $158,816.

Paul already served the first of his two game ban during the Rockets’ loss to the Los Angeles Clippers on Sunday. With the loss, the Rockets-who led the NBA last season with a record of 67-15, now have fallen to 1-2 in the young season. Meanwhile, Ingram and Rondo will begin serving their penalties during the Lakers’ Monday game versus the San Antonio Spurs. The purple and gold are 0-2 to start the LeBron James era. 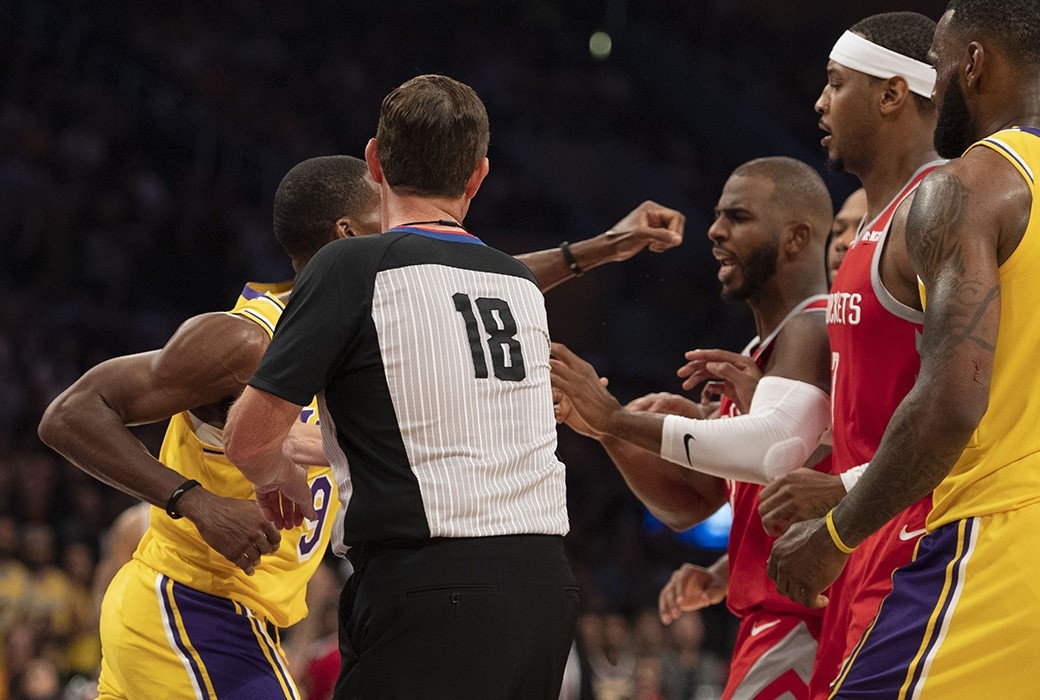 The Rockets were up 109-108 with 4:13 remaining in a closely contested game when Ingram was called for a foul on a driving James Harden. The Lakers’ forward inexplicably shoved Harden in the back and was immediately assessed a technical foul by referee Jason Phillips after he screamed at the referee. Ingram was pulled from the scene by teammate Lance Stephenson. That’s when the main event began.

Rondo and Paul began to exchange words when suddenly Paul stuck his finger on Rondo’s face. Rondo warded off Paul by pushing him backwards and then from nowhere, he unleashed a left straight which landed flush on CP3’s face. All hell broke loose and Paul threw punches back at Rondo although it wasn’t clear if he was able to connect as cleanly as Rondo it. Ingram ran back to the scene and threw a punch at Paul. LeBron James managed to cool off CP3 a little and was able to pull him away from the scene. The referees then ejected all three participants of the brawl.

After he was ejected, Paul told media that it was Rondo who triggered the incident by spitting in his face. At first glance, it didn’t appear that Rondo did but the Rockets would later submit a zoomed video which showed that Rondo did spit at Paul, causing the latter wipe his face before pointing a finger in Rondo’s face.

When play resumed, the Rockets pulled away from the Lakers behind Harden and won the game 124-115 to notch their first win of the season. Los Angeles fell to 0-2 in the LeBron James era but the incident was more than just a loss. It was a clear sign of frustration from the Lakers this early in the season.

Inability To Close out On Three Point Shooters 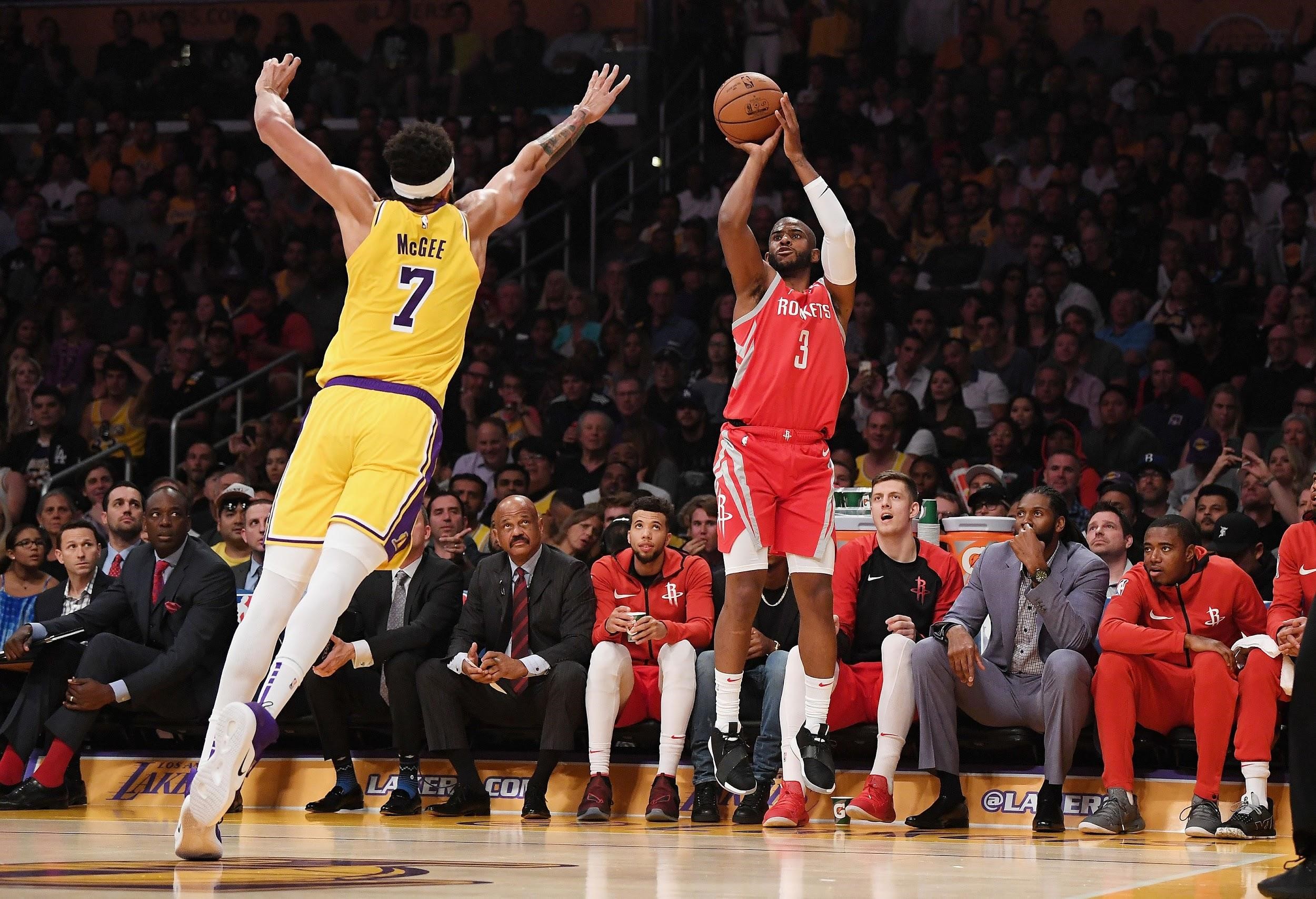 Los Angeles had been touted as one of the top teams in the West this season with the addition of LeBron James who signed a free agent deal with the Lakers this past summer. Oddsmakers have gone as far as putting the Lakers among the Top 5 teams with the best odds of winning the 2019 NBA title.

With the expectations high, not just from the bookies but from their fans as well, Los Angeles had miserably failed to live up to them so far. During preseason play, the Lakers beat the Golden State Warriors twice and on back to back games but other than that, they displayed poor defensive rotation particularly in closing out on opposing three point shooters.

Not only that, the Lakers have shot poorly from behind the three point area as well, making it hard for LeBron James to dominante inside the shaded lane because the defenses are able to concentrate on defending the paint. Not only that, the Lakers also don’t have a low post threat who could help James with scoring inside the paint. While James is a powerful finisher, he doesn’t have a go to move and struggles to score inside when defenses gang up on him.

While James has had success in every stop he’s made in the NBA, he’s done better when he is surrounded with great three point shooters. He had Kyle Korver and Kevin Love in Cleveland plus the likes of Ray Allen, Shane Battier and James Jones in Miami who consistently made shots from behind the three point area. The Lakers have shot just 24.2% from the three point area in two games.

James had said that the Lakers chemistry would not come as easy instant oatmeal. But more than finding his teammates with his eyes closed, it’s in their defensive rotation that they’ve struggled the most. Against the Blazers, they gave up 13 three pointers and another 16 against the Rockets. In contrast, they made just 7 triples on opening night and 8 against Houston. In total, they have been outscored by 42 points from behind the three point territory which is more than their aggregate losing margin of 18 points.

It’s interesting how it goes from here for the Lakers. LeBron James has made the playoffs in every NBA season he’s played. For sure, that streak is on the line this season with his Lakers.