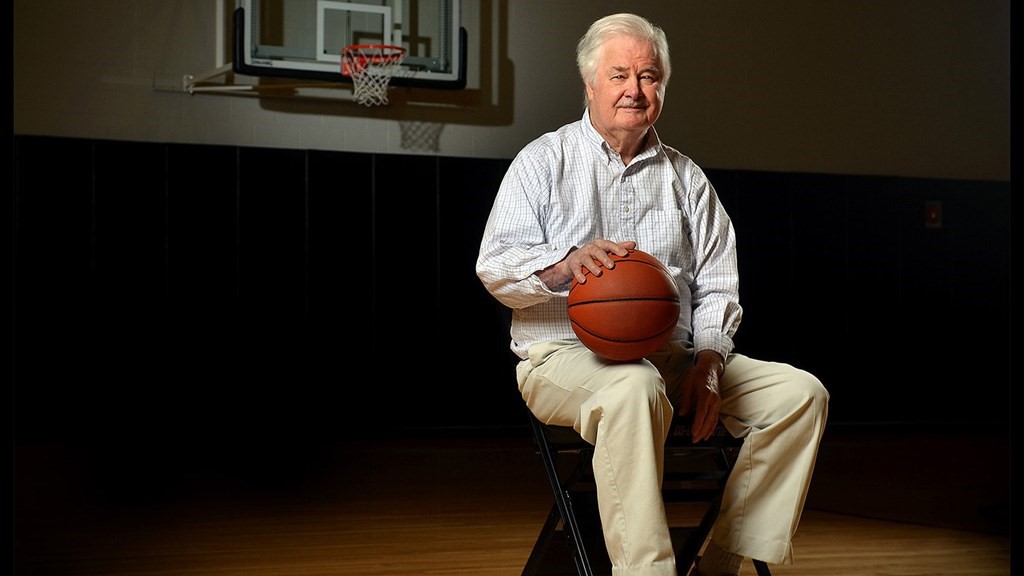 Tex Winter: Remembering The Man Who Popularized The Triangle Offense

We all know that the Chicago Bulls won six NBA titles during the Michael Jordan era. We agree that most of the credit belong to Jordan, Scottie Pippen and head coach Phil Jackson. Not to mention John Paxson and Steve Kerr who made big baskets in big games. A lot of people also know about Tex Winter, the gray haired assistant coach who sits beside Phil Jackson on the bench. But Winter was more than just a trusted aide of Phil. He was the man behind the offense in Chicago and in Los Angeles.

On Wednesday, the man who is called as the Father of the Triangle Offense passed away in his hometown of Manhattan, Kansas at the age of 96. Winter’s health started to slow down after he suffered a stroke in 2009 while attending a reunion of his 1958 Final Four Kansas State team.

"Like James Naismith, Tex Winter was an educator at heart who deeply believed in the values of the game of basketball -- teamwork, discipline and selflessness. A pioneering Hall of Famer with 10 NBA Championships, he taught those values to generations of players and coaches, leaving a legacy that will forever be part of our history."

Winter’s legacy is the triangle offensive system, which has often been mistakenly credited as his brain child. Winter popularized the triangle offense in the NBA during his stint with the Chicago Bulls and the Los Angeles Lakers. In fact some of the former players he once coached in those teams who are now head coaches in the NBA are using the system in their current jobs.

Two best examples are Steve Kerr of the Golden State Warriors and Luke Walton of the Los Angeles Lakers. Although Kerr and Walton don’t exclusively run the triangle, the offensive system they use in their current teams have touches of Winter’s triple post offense. Kerr isn’t shy about giving Winter credit and in fact he referred to his former assistant coach as “one of the most important people in his basketball career”. Said Kerr:

"What he did for me and the path he put me on and the chance he gave me in Chicago along with Phil Jackson changed my whole life," Kerr said. "I learned so much about basketball from Tex. [Warriors assistant] Ron Adams told me Tex knew more about the history of the game and the fundamentals of the game than anybody he'd ever met in his life. And I was lucky enough to play for Tex for five years and learn from him. A lot of what I do here with the Warriors is patterned after things I learned from Tex.”

Likewise, Walton said that he owes his career to Tex Winter:

"Tex used to always try to get me in the game. I love Tex," Walton said. "I was talking to Steve [Kerr] about it a little bit, too. We were saying just how much guys like us owe our entire playing careers to Tex and people like that who really teach the game.”

Teach is what Tex Winter did. And the result wasn’t just winning. It created legends and dynasties altogether.

Not The Founder of The Triangle Offense 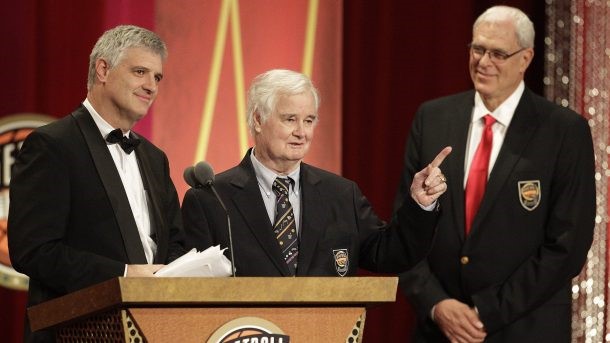 Born as Morice Frederick Winter on February 25, 1922 in Wellington, Texas, Tex moved along with his mother and a sister to California after the death of his father. Winter attended Oregon State University on a track scholarship (he was a pole vaulter) before serving in the U.S. Navy as a pilot in World War II. Winter played guard for the Navy basketball team where he played for Chuck Taylor, the name we only know as a model of Converse sneakers.

After the end of the war, Winter finished his schooling at the University of Southern California where he played basketball alongside future Hall of Famer Bill Sharman. It was in USC where Winter met head coach Sam Barry, the man who IS the founder of the Triangle Offense.

In 1947, Winter became an assistant coach at Kansas State under Jack Gardner and later coached Marquette for two seasons where he became the youngest head coach in NCAA basketball at the age of 30. Winter then returned to become the head coach of Kansas State in 1953.

Winter amassed a record of 261-118 and finished with a school record 68.9% winning percentage. He led the Wildcats to a pair of Final Four appearances in 1958 and 1964 in six trips to the NCAA tournament. Winter also held coaching positions at the University of Washington, Northwestern University, and Long Beach State and LSU. He also spent parts of two seasons coaching the Houston Rockets in the 1970’s.

In 1962, Winter wrote the 320 page book “The Triple Post Offense”, which detailed the intricacies about the triangle offensive system he learned from and played with under USC coach Sam Barry. In every coaching stop he went to, Winter preached the triangle system and that’s the reason why he is the coach who is most linked to it. 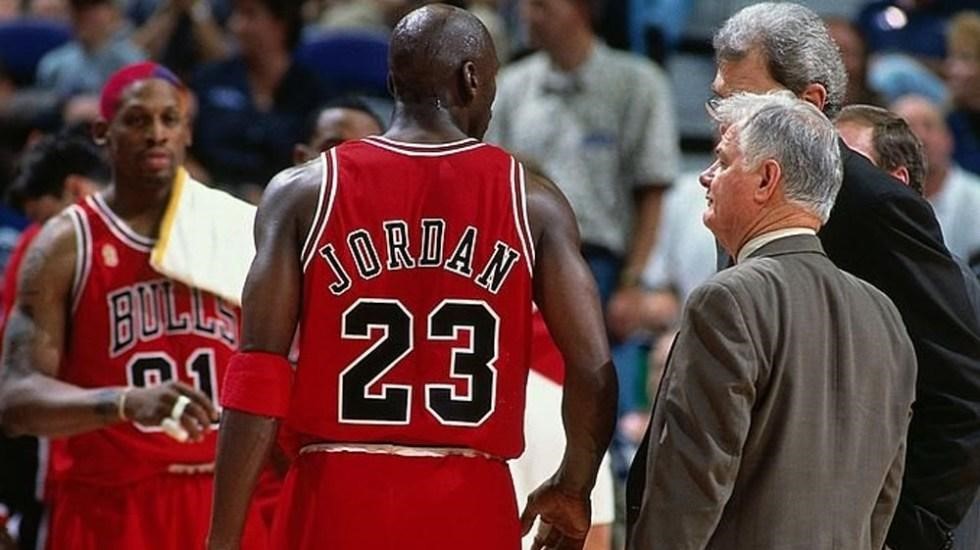 Winter was hired by then Chicago Bulls GM Jerry Krause as an assistant coach in 1985 and he brought his offensive system to the Bulls. When Phil Jackson became head coach of the Bulls during the 1989-90 NBA season, Jackson combined Winter’s triangle system and his holistic coaching approach to turn the Bulls into one of the most dominant teams in NBA history.

Michael Jordan was already a mega star when Winter and Jackson arrived at the scene. But there was no doubt that Jordan’s gifts were maximized because of the Bulls’ triangle system. With Jordan playing at his highest level, the Bulls went on to win a total of six NBA championships during the 1990’s, a dominance only bettered by the 60’s Boston Celtics teams. Said Jordan after Winter’s death:

"I learned so much from Coach Winter. He was a pioneer and a true student of the game,'' Michael Jordan said in a statement emailed to the Chicago Tribune. "His triangle offense was a huge part of our six championships with the Bulls. He was a tireless worker. Tex was always focused on details and preparation and a great teacher. I was lucky to play for him. “

When Phil Jackson went to Los Angeles, the Zen master brought Winter along with him. The Lakers had an ultra talented duo of Shaquille O’Neal and Kobe Bryant, but the pair never reached their full potential as individuals and as a duo until Jackson and Winter arrived in Tinseltown. The Lakers would win three straight NBA titles at the start of the 2000 century and they would carry on the triangle offense that made Chicago a dynasty before them. Lakers team owner Jeanie Buss also paid tribute to Winter in a statement:

"On behalf of the entire Lakers organization, I'd like to express our sadness at the passing of Tex Winter. Tex helped lead the team to four NBA Championships and was a mentor to many of our coaches and players. In addition to his numerous contributions to the game of basketball, Tex was a wonderful man and he will be dearly missed."

Going To The Next Level 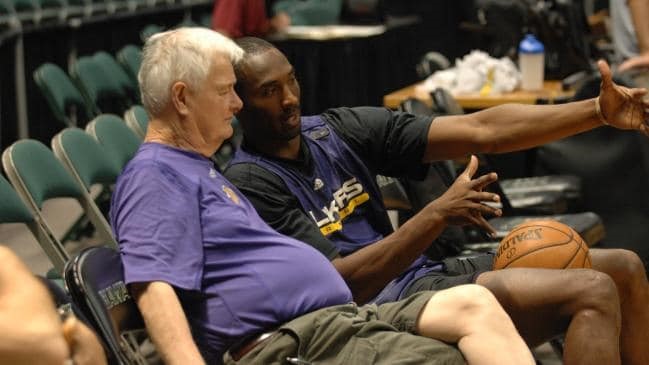 Kobe Bryant, the Lakers’ superstar who finished his brilliant NBA career with a total of five NBA titles with the help of Winter, also acknowledged the father of the triangle offense. Said the Black Mamba:

"My mentor. I sat with Tex & watched every minute of every game during our 1st season together. He taught me how to study every detail,'' Bryant posted on Twitter.

Shaquille O’Neal, the most dominant big man in the NBA since Kareem Abdul Jabbar, also talked about his relationship with Tex Winter. Said Shaq:

"We used to argue a lot. He was a master of the triangle. I liked to go out of the triangle every now and then, but, he would just convey the message that it works and we'd sit and watch film and he had to say, 'Sometimes you have to be not Shaq the dominant guy, you got to be like a decoy, get others involved.'" Shaq said Wednesday night. "I think when I did that, especially in the playoffs, everybody was able to be comfortable and step up. But again, he definitely helped me get to that next level."

Winter was never in the spotlight in any of the 10 NBA championships he helped win. But for the stars who became legends in those 10 title runs, they all admit that it was Tex Winter who helped them get to the next level.

Tex Winter won’t be remembered as much as Michael Jordan, Kobe Bryant, Shaquille O’Neal and Scottie Pippen, but no question all those players will never forget Tex Winter. We lost a basketball genius this week but the heavens surely gained another great mind. Don’t be surprised if Winter is preaching the triangle offense to angels. RIP Tex Winter.