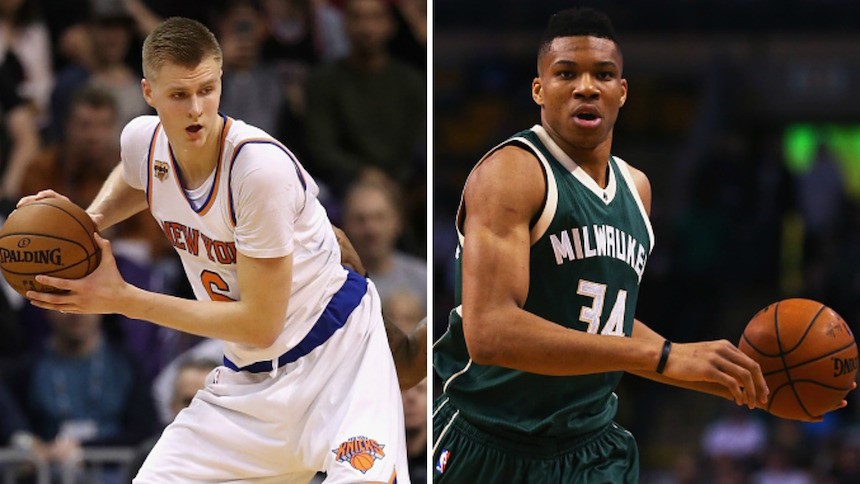 The NBA’s unicorns have taken centerstage this season. Giannis Antetokounmpo and Kristaps Porzingis have emerged as two of the best players in the league. Between these two unicorns, which one is better?

Let’s try to answer that question. Read on. 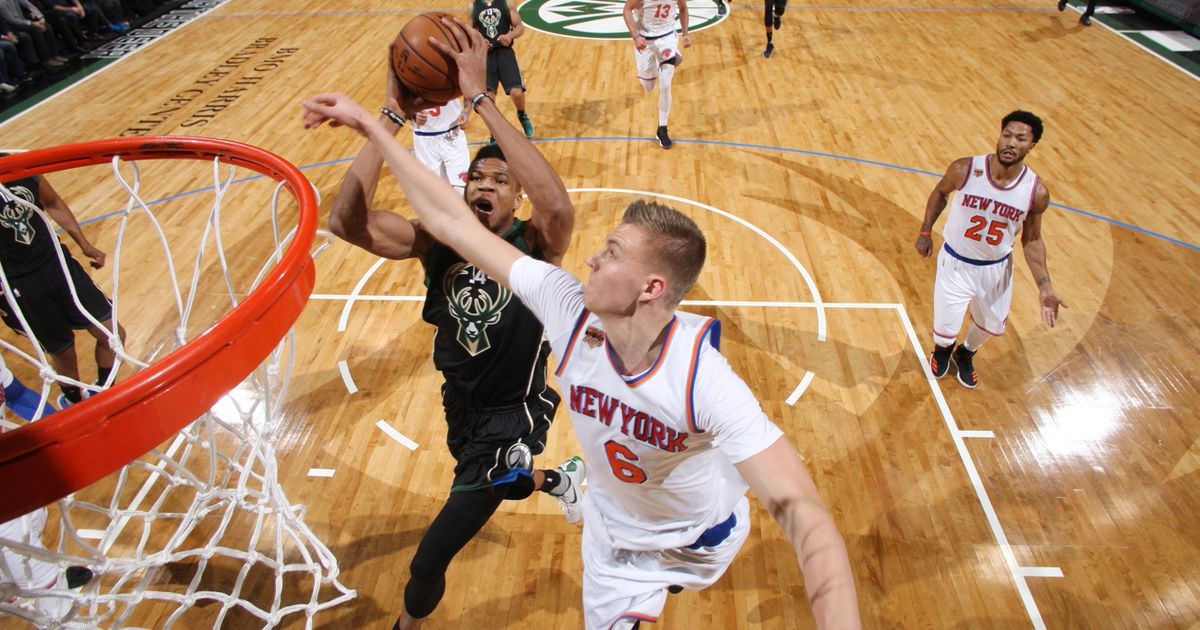 Antetokounmpo is 2nd in the league in scoring at 29.5 points per game, just a shade behind the NBA’s top scorer in James Harden. Porzingis meanwhile is 4th in that list at 27.0 points per contest. Giannis is outscoring Kristaps at almost the same shots per game at 20.5 against 20.2 respectively. But Antetokounmpo is scoring his points while playing 4.8 more minutes per game than Porzingis.

Accuracy-wise, Antetokounmpo is shooting the leather at a higher field goal percentage at .552 per game as compared to Porzingis’ .464. But the main reason for this is because majority of Antetokounmpo’s shots come from closer to the basket and because Porzingis shoots the ball regularly from three point distance ( 5.2 three point attempts per game ). 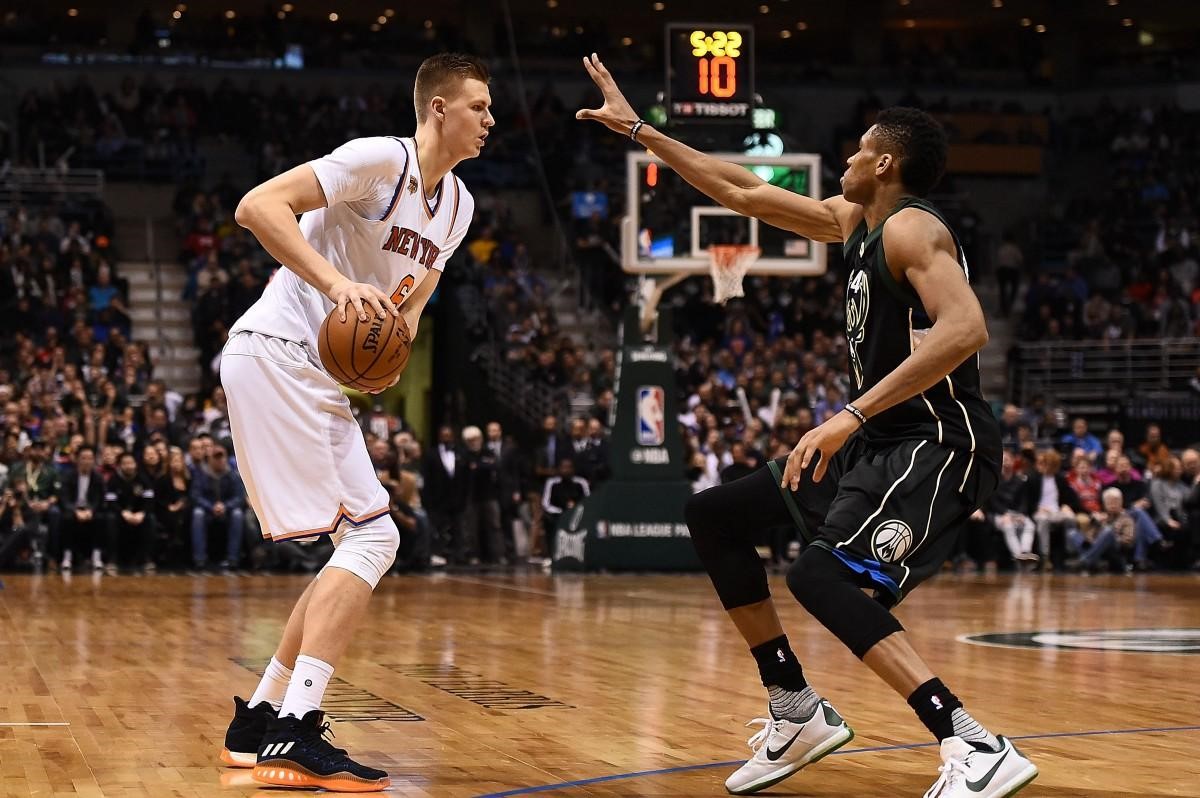 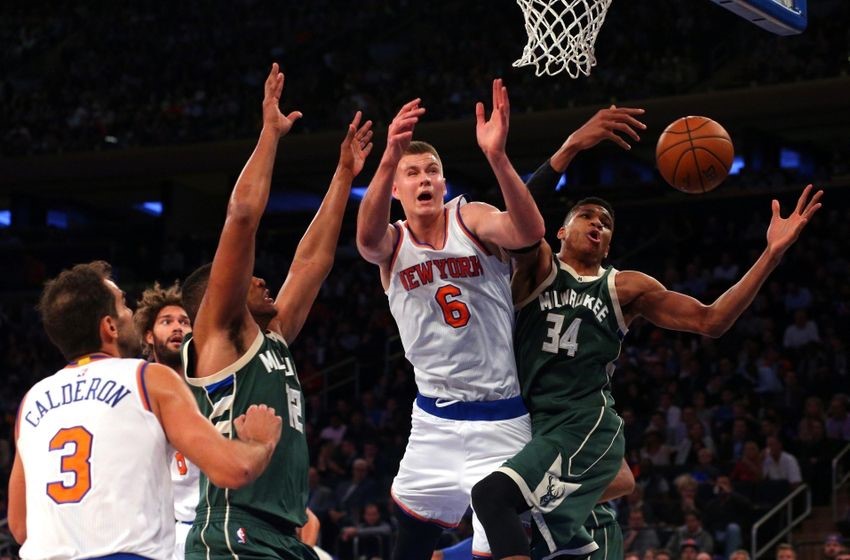 In terms of rebounding, assists and steal, Giannis Antetokounmpo has the better averages than Kristaps Porzingis. That’s both for this season and for their career averages. The most noticeable advantage here is in terms of assists where The GF has a big 3.2 assists per game advantage over Porzingis. But don’t forget that Dirk Nowitzki became a Top 5 NBA player and won an NBA title without an excellent passing game.m

Now here’s the main difference between the two. While both are listed as Power Forwards, Antetokounmpo is the more versatile player as he has the ability to play point forward. As early as the 2016 season, Bucks’ head coach Jason Kidd has played Antetokounmpo as the point guard and with plenty of success. Giannis’ ability to be the primary playmaker is his biggest edge over Kristaps Porzingis.

On the other hand, Porzingis is a stretch forward who can move up to the five spot and be an elite rim protector. Porzingis has the offensive ability of a Dirk Nowitzki ( but more athletic ) and the fact that he leads the league in blocks per game and total blocks this season is proof that he can also be an elite center. So while he may not be able to play the point like the Greek Freak, Porzingis rim protection makes him a legit center that Antetokounmpo can’t be. 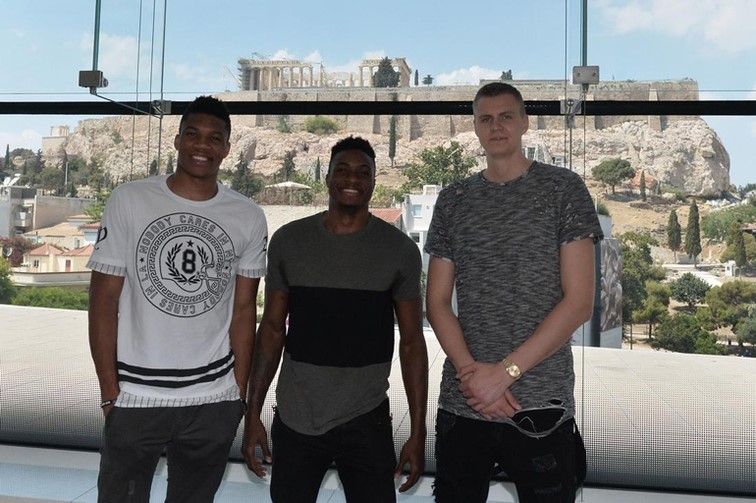 Antetokounmpo and Porzingis have almost similar numbers this season. But the thing is, Giannis is doing it in his fifth NBA season while Porzingis is recording his stats in just his third NBA season. So if you compare their year to year numbers, you can conclude that it took Porzingis a shorter period of time to become who he is today. In that sense, KP developed faster than the GF.

But then you also have to consider that Antetokounmpo began his NBA career at a younger age than Porzingis. The Greek Freak entered the league at age 19 while Porzingis was a year older at 20 when he began playing for the Knicks. Not that KP was already mature and complete when he got here but Giannis was the more raw talent when he arrived in the NBA.

If you take a look at how they play their games, it looks like Antetokounmpo has almost reached his full potential. He is already a complete player. Porzingis looks like he has more room for growth. So on one hand, you’d pick the more complete player now over the one with still plenty of room to grow. But in terms of the future, you’d choose the other player who is matching him stat for stat and yet hasn’t even tapped into his full potentials. 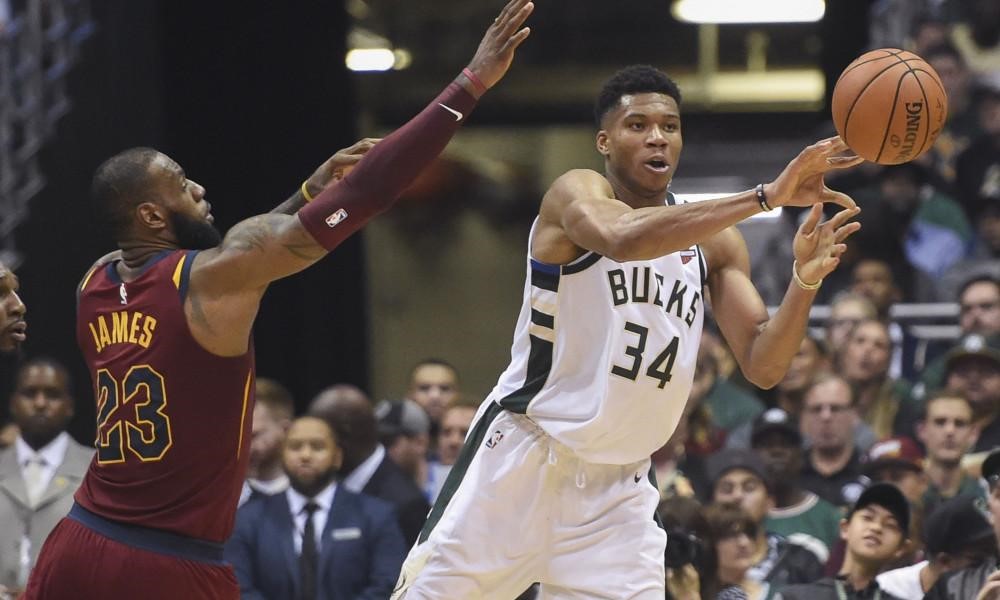 Antetokounmpo’s superb all-around brilliance has earned him comparisons to LeBron James, even at this early stage of his career. And why not? At age 23/ Year 5, King James and the Greek Freak almost have identical numbers. James had minimal advantage in scoring and steals. Antetokounmpo’s edge over James is in rebounding while LeBron had the advantage in assists.

Fast forward to the 2017-18 season. The Greek Freak has better averages than King James in points, rebounds, blocks and steals. And although is still clearly the better playmaker at 8.5 assists per game, Antetokounmpo’s assists per game average has increased by at least one assists per year since his rookie season ( although the early 2017-18 numbers are a little down compared to last year ). 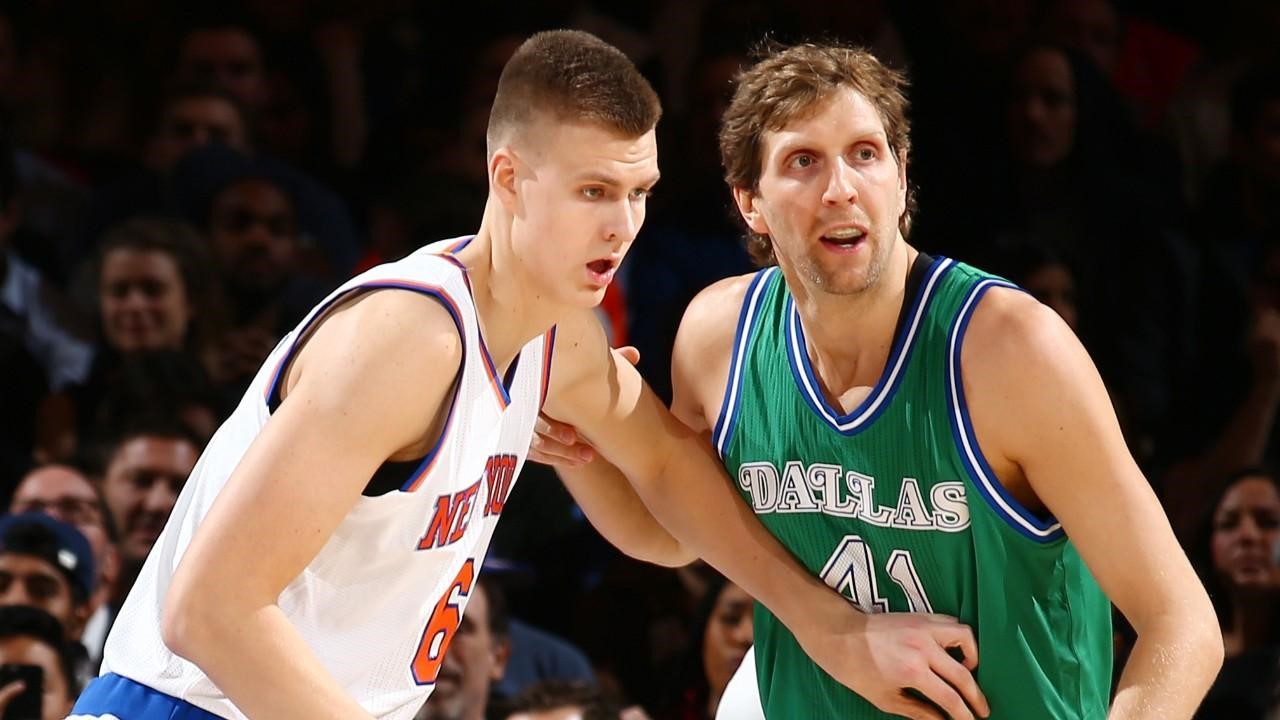 While Antetokounmpo has been compared to King James, Porzingis has been likened to Dallas Mavericks’ superstar Dirk Nowitzki. Like Nowitzki, Porzingis had plenty of critics when he first came to the NBA. Many called Nowitzki too soft during his early years but look what Dirk has become now? We remember too well how Porzingis was booed by New York fans on draft night. We know now that those who booed him are chanting MVP now.

Like Nowitzki, Porzingis has excellent three point range for his size. Only six seven footers in the history of the NBA have made at least 110 three pointers in a single season. Dirk has done it six times in his 20 seasons. Porzingis made 112 last season, in his third year in the league, putting him on pace to match Dirk’s count.

Nowitzki is a career .381 shooter from beyond the arc. Porzingis’ three point accuracy has increased in each of his three seasons. He shot .333 and .357 in his first two NBA seasons. Thru 18 games played in the 2017-18 season, Porzingis is shooting the three ball at an impressive .398 accuracy. Dirk was a career .879 foul shooter but Porzingis isn’t far off at .817 for his career and .841 this season. In terms of true shooting percentage, Porzingis’ career .540 is just as good as Dirk’s .578. 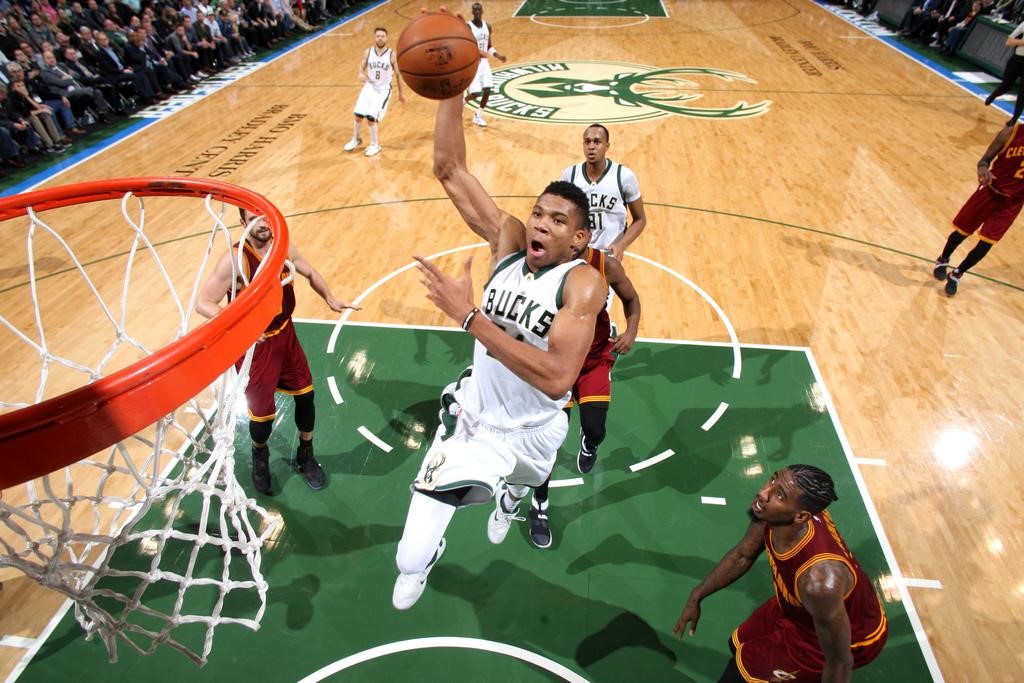 We all love the Greek Freak. All of us are in awe when we watch him play. His ability to handle the ball like a guard and finish like a small forward is something we haven’t seen a seven footer do this well. If there is any weakness to his game, it may be his outside shot. Porzingis will always be the better shooter than Antetokounmpo But remember that Giannis has improved all his shooting percentages year after year. And the fact that he has a good stroke from the free throw line makes us believe he will hit his outside shots ( including three pointers ) better in due time.

Porzingis may be the better shooter and has the better range but remember that Antetokounmpo is worlds more athletic than Porzingis. Sure. Porzingis handles the ball better than any other 7-3 guy in the history of the game and his handles continue to improve. But Giannis’ end to end speed is perhaps one of the best in the league. His ability to finish strong and hard is a beauty to behold. Imagine how dangerous he will be with that three point weapon.

Defensively, they are different. Porzingis is a versatile big man who can play 4 and 5 on defense. He is an excellent rim protector and an elite shot blocker. Although he may not be as good an interior defender as Kristaps is, Antetokounmpo can guard positions 1-5 and is the better on ball defender than Porzingis. 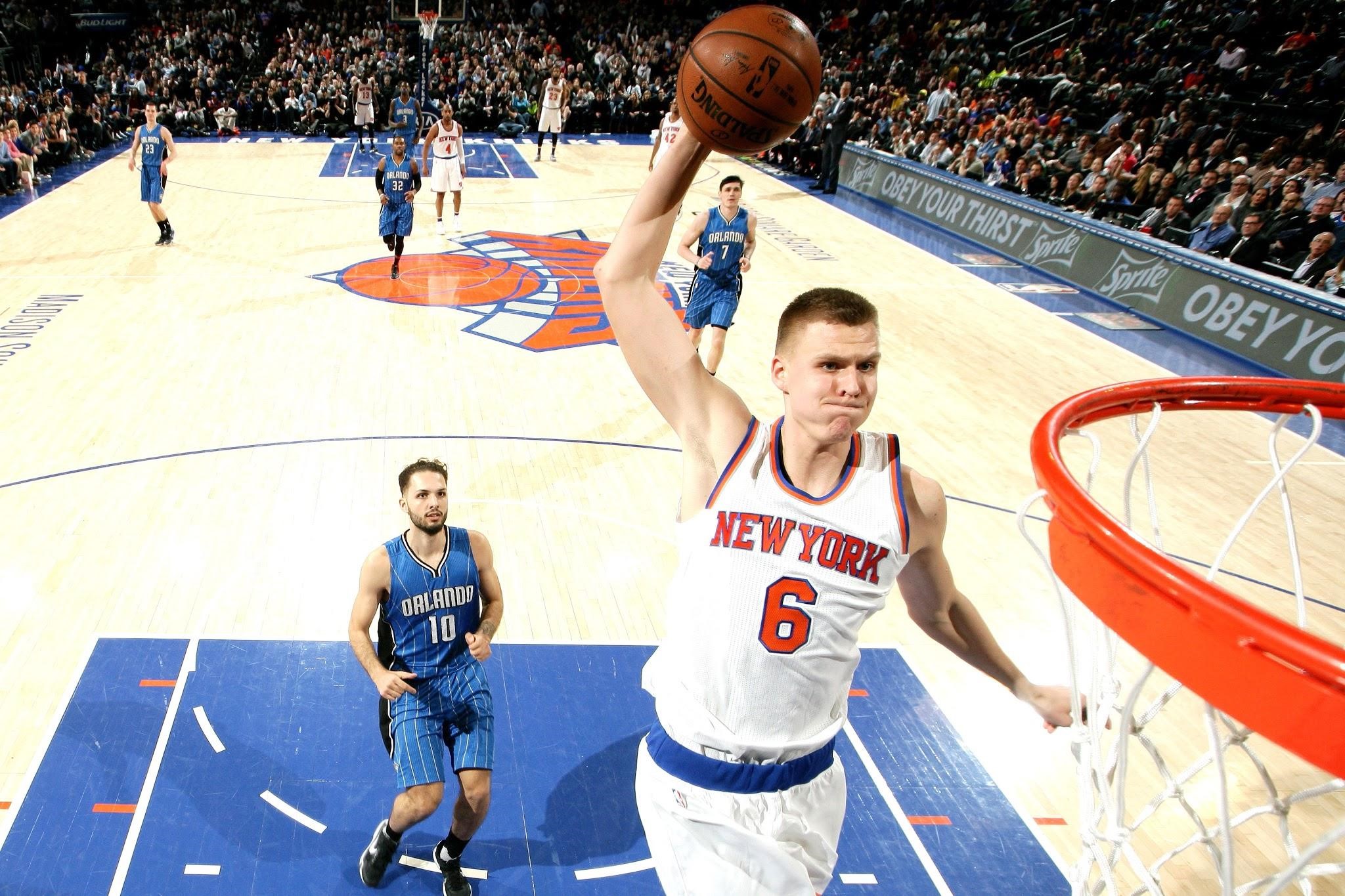 u can argue that Giannis has the better all-around game and that Porzingis only edge is his shooting. That may be the case right now but remember that Antetokounmpo has been in the NBA two years longer. And given the improvement that Porzingis has made year after year, you can’t for sure who will end up as the better all around player when all is said and done.

But numbers aren’t everything that matter. As of 11/28/17, the New York Knicks are 10-10 and the Bucks are 9-9. Currently, both teams are out of playoff position but are within striking distance. But if you take a look at their rosters, the Bucks have a superior line-up compared to the Knicks. They also have the better coach and the playoff experience.

Sure, the Knicks have Courtney Lee and the overachieving Tim Hardaway Jr. They also added good role players in Enes Kanter and Doug McDermott. But Porzingis plays on a team that has Jarrett Jack as starting point guard and a coach who has never won 50 games before. And don’t forget, the Knicks had just lost main man Carmelo Anthony via trade and yet they look even better with Porzingis at the helm.

Both players are a physical anomaly. They aren’t supposed to exist, that’s why we call them unicorns. There are other unicorns in the league but these are the two who currently standout. Right now, Antetokounmpo is the MVP material, doing it all for his team while piling up other worldly statistics. But Kristaps Porzingis has made equal progress in a lesser period of time. At the same time, Porzingis emergence as the new main man in New York has made the team play better and exceed expectations.

Picking between the two is apples and oranges. If you want power and athleticism, go with Giannis. If you prefer finesse and grace, pick Porzingis.