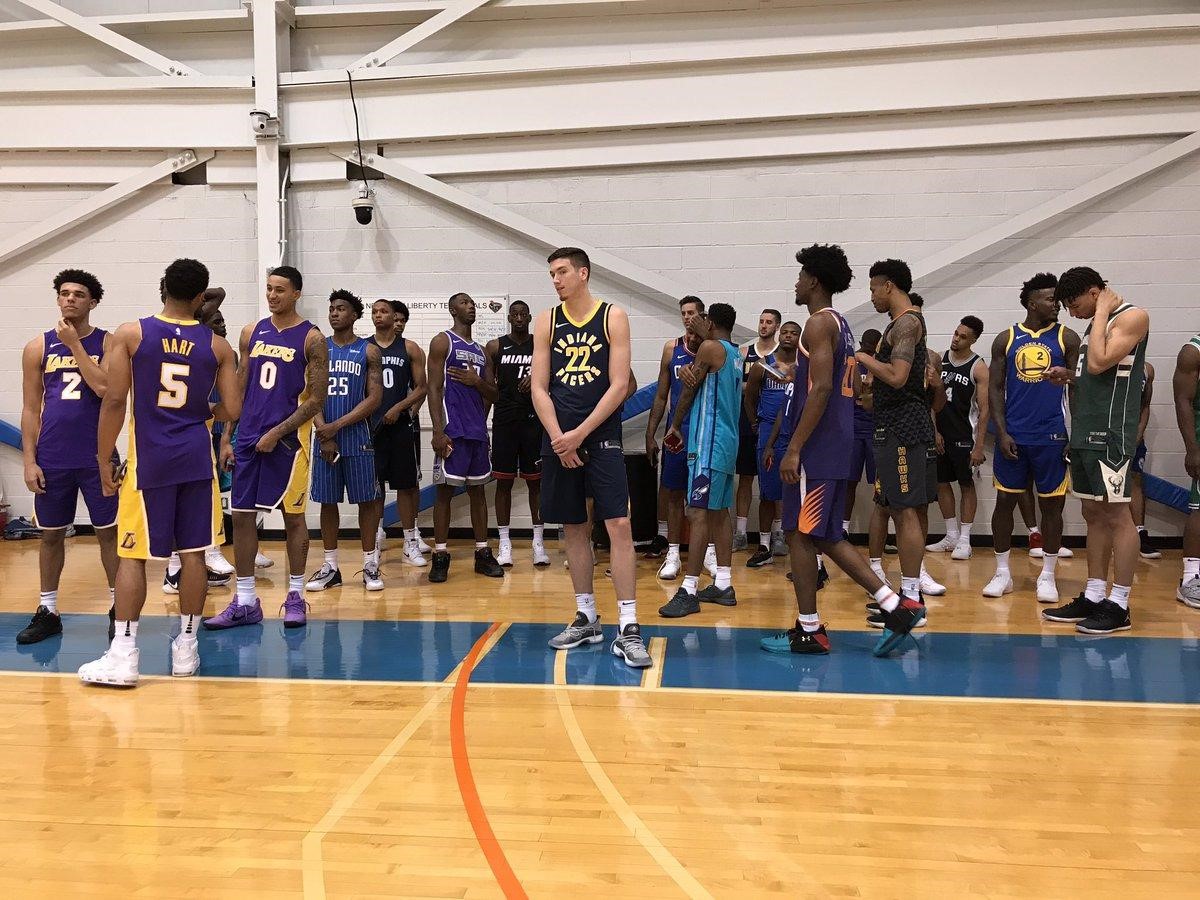 The First Scene of a Rivalry? The 2017 NBA Rookie Photo Shoot

It has become a tradition. The NBA’s current rookies getting together for a photo shoot in New York. This year’s class was no different.

But amidst the occasion, some intrigue has been placed on the actual class photo itself. On the photo, the Lakers’ Lonzo Ball ( 2nd pick ) is seen with a wide smile. On the other hand, the Sixers’ Markelle Fultz ( 1st pick ) doesn’t look to be as happy beside Lonzo. The reason? They say it’s because Lonzo had the ball in the photo:

Camera guy: "um okay, Lonzo(#2 DP) let's have you hold the ball here in the middle and Markell (#1 DP)... you can just stand next to him" pic.twitter.com/oMifqzKmHc

Not sure whether that was actually what the camera guy said but obviously, Fultz doesn’t look to happy standing next to Lonzo Ball holding the basketball during the traditional Rookie class photo. He had a reason to feel slighted. Look at this image before the actual photo itself. Markelle had the ball in his hands.

But when the finished product was published, it was Lonzo Ball holding the leather: 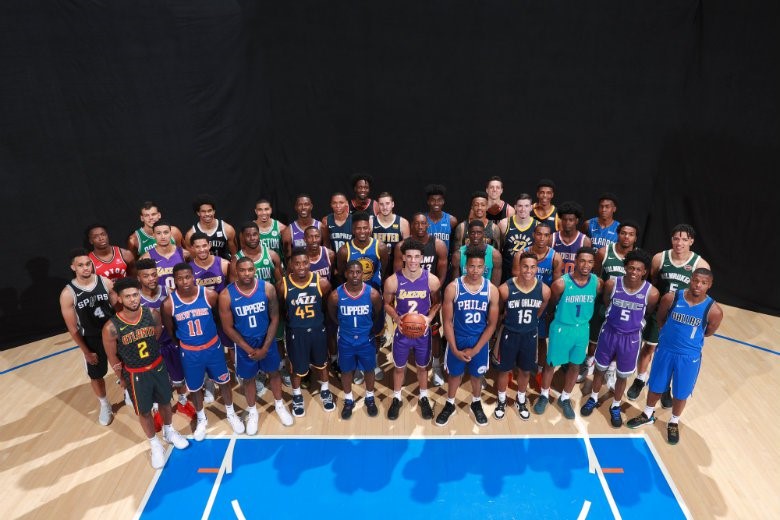 Now many people online are making a big deal out of this. Some say that as the top pick of the 2017 NBA draft, it should be Fultz holding the ball, not Lonzo Ball. But is there a rule or tradition that says he should? 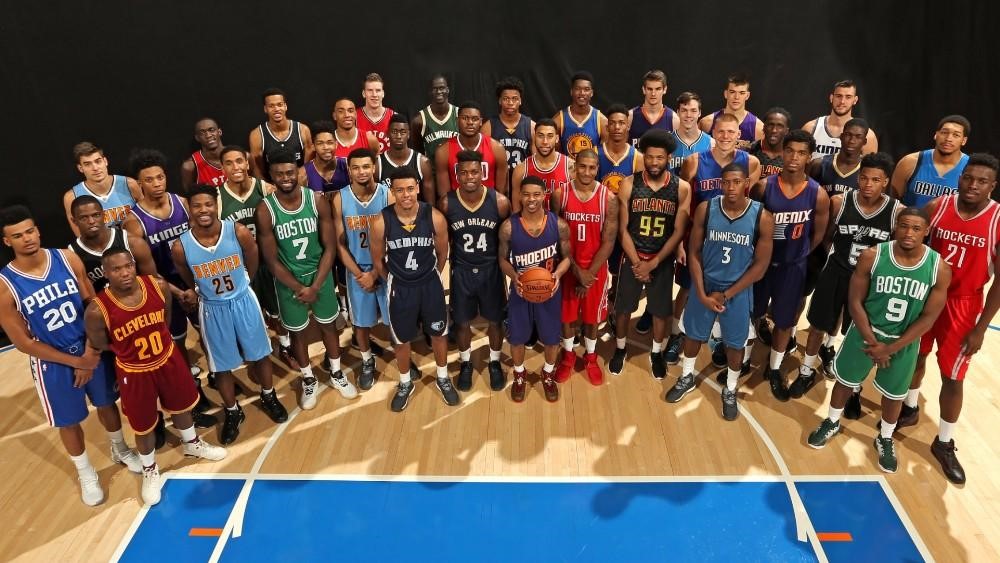 This was the class photo for the 2016-17 Draft rookies. Notice that it’s #8th pick Tyler Ulis of the Phoenix Suns ( #8 guy ) holding the ball. But notice too that the top two picks in the draft aren’t in the photo. The highest pick in the photo is #3 Jaylen Brown of the Boston Celtics, who is third from left in the first row. Looks like he’s happy with Ulis holding the ball. Just look at his smile.

The top pick for the 2016 draft was Ben Simmons of the Philadelphia 76ers while the 2nd pick in that class was Brandon Ingram of the Los Angeles Lakers. Both weren’t in this photo but they were in the event. In fact, they took individual photos during the 2016 NBA Rookie Photo Shoot: 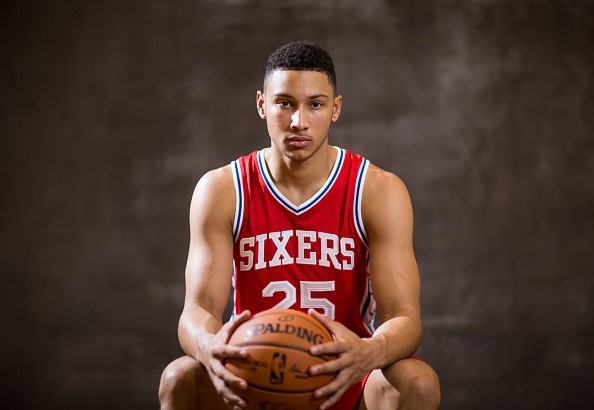 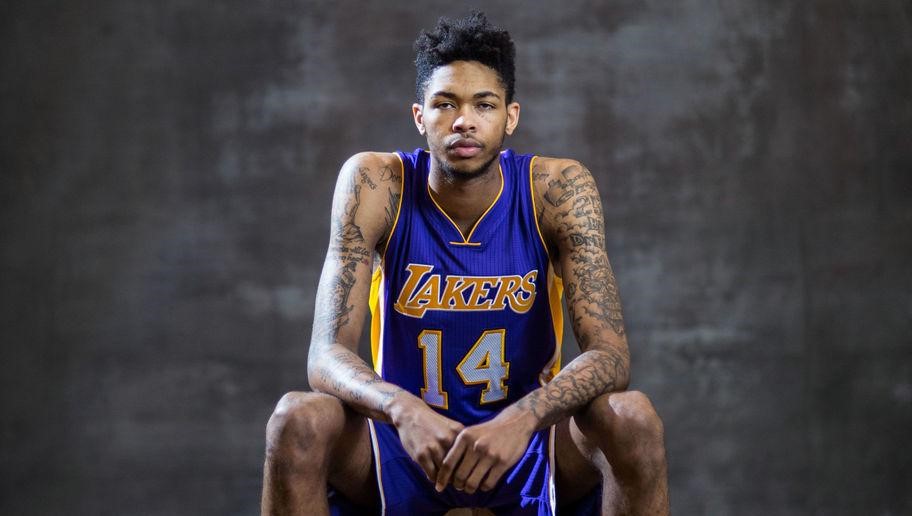 So you see, it’s not necessary for the #1 pick to hold the ball in the photo. It’s not even necessary for him to be in the photo itself. But the thing with the 2017 Rookie class photo was both Markelle and Lonzo were there, so maybe when both #1 and #2 are there, it should be #1 with the ball.

No Ball At All 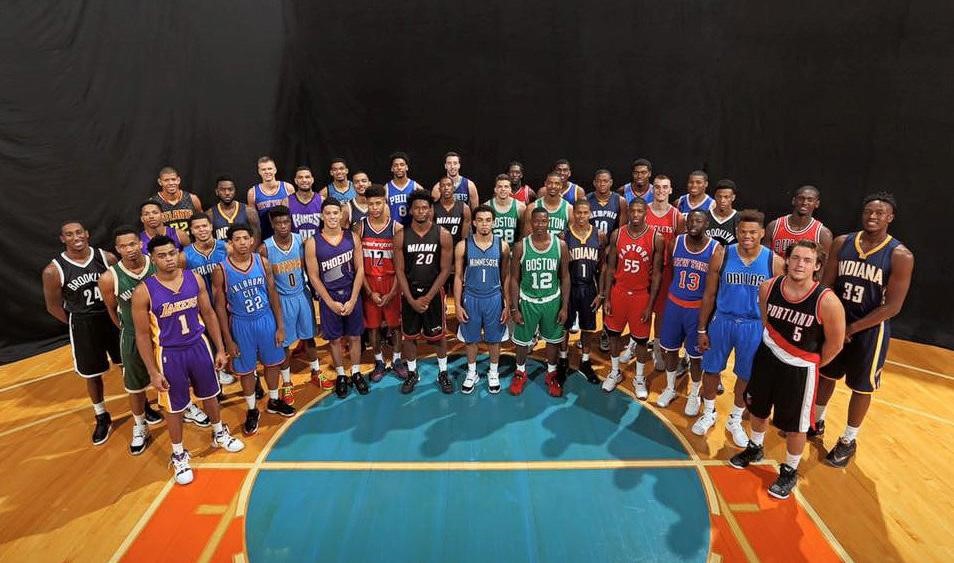 So we looked farther back memory lane and found this class picture of the 2015 Rookie class. Notice Karl Anthony Towns at the back and in between Kristaps Porzingis and Jahlil Okafor. Towns was the top pick in 2015. D’Angelo Russell was 2nd and he’s first from left in the first row ( Lakers #1 ). Okafor was #3 and Porzingis #4. But notice that there isn’t even a basketball in this photo. So why make a big fuzz with the basketball now?

Watch at the 0:48 mark of the video as D’Angelo Russell hits a no-look one-handed shot from half court that drew ‘oohs’ and ‘aahs’ from his batchmates. Pretty impressive shot right there from D-Lo. Well he was impressive too coming from college. We thought he was going to become the Lakers’ point guard of the future. But now we know he’s not. D-Lo’s now in Brooklyn and a kid from the current 2017 Draft class is being heralded as the next Magic Johnson in Los Angeles.

Now does that shot look familiar? We just talked about D’Angelo Russell’s trick shot in 2015. Two years later, it’s 2017 #1 pick Markelle Fultz with the same amazing make. Wait up, Fultz even took it farther. Watch this:

Wow. Two years ago it was #2 who made that shot. Now it’s #1 who made the shot. Isn’t that just a coincidence or what? We know Markelle Fultz is excited to be playing for the Sixers just as Joel Embiid and the rest of the guys are thrilled at the prospect of the ‘FEDS’ ( Fultz, Embiid, Dario and Simmons ) taking the NBA by storm. But will he end up being traded like D’Angelo Russell? There’s something interesting about the Sixers’ draft picks though.

Seven of the last 10 top picks of the Sixers ( prior to 2017 ) are no longer in the team. But note though that five of these were outside the Top 10 picks. Evan Turner was the highest at #2 and Nerlens Noel the other one at #6. It’s a scary prospect that the Sixers aren’t fond of keeping their picks and that only few of their draftees have become long-time players for the team. In fact, the player on the current roster who’s played most season for the Sixers is Robert Covington with three. Good news for Markelle Fultz though. The Sixers have kept their last three top picks in Embiid, Okafor and Simmons. But for how long? 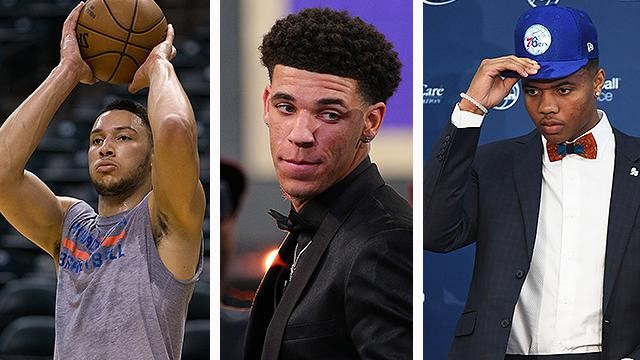 So much with the photo. Now let’s go to the more important topic: Who will be the 2017-18 NBA Rookie of the Year?

After the 2017 NBA Summer League, Oddsmakers at Oddshark.com have the Los Angeles Lakers’ Lonzo Ball as favorite to win the Rookie of the Year award. As of the latest odds dated July 24, 2017, Ball is a +250 to win the trophy. Dallas’ Dennis Smith Jr. is next at +300 followed by Ben Simmons at +375 and Jayson Tatum at +500. Fultz is 5th at +1000. To look at the numbers in terms of implied probability. The possibility of Lonzo Ball winning the ROY award is 28.57%. On the other hand, Fultz’s percentage is only 9.09%.

But while the oddsmakers’ lines are reliable, they are nothing but betting money. What about the ‘experts’? Who do these people say is going to win the Rookie of the Year award next year? Well ESPN did a Summer Forecast, presumably based on the Rookies’ Summer League performance. And the result? Lonzo Ball topped the voting with 21 first place votes and a total of 140 points. Dennis Smith Jr. came in second with 12 first place votes and a total of 86 markers. Ben Simmons was third with 62 points and Markelle Fultz was fourth with 60 votes. 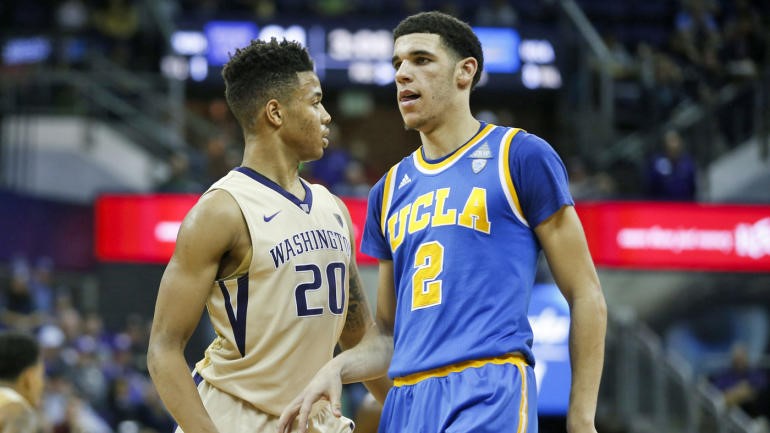 “At this stage, everything points toward Fultz winning Rookie of the Year. That's by no means a guarantee, but he's the best prospect in the class, landed in an advantageous spot with talents who complement him nicely and should have no trouble earning minutes from the start.”

According to nba.com’s Rookie Ladder, it’s Lonzo Ball at #1 as of July 18. Jayson Tatum of Boston is #2 and Ball’s Lakers’ teammate Kyle Kuzma at #3. Once again, this ranking was based on the Summer League performances of the rookies so MVP Ball was rightfully on top.

Regardless of who the predictions say, the names that are on the list are always Ball, Fultz, Simmons and Smith. Among the four, there seems to be rivalry between the Ball and the Sixers’ duo of Simmons and Fultz. Remember Simmons and Joel Embiid got into a social media feud with Lonzo’s dad Lavar. But focus will be on Lonzo and Markelle, the top two picks of the 2017 NBA Draft. Will they be the next big rivalry in the NBA? We’ll soon find out.