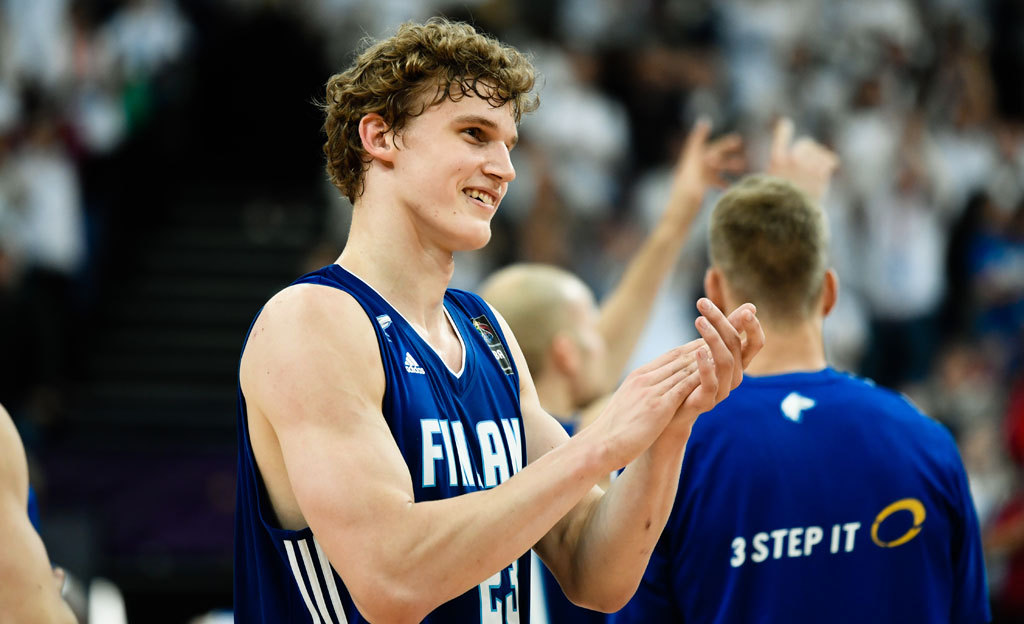 The Future Looks Bright For Finland and The Chicago Bulls

Finland's impressive run at the 2017 FIBA Eurobasket ended in the Round of 16 when the red hot Marco Belinelli and Italy beat them 70-57. But while the Finns wish their team could have moved forward in the tournament, the Chicago Bulls are happy that their prized rookie Lauri Markkanen will have two weeks to rest before training camp begins.

The Bulls got a scare when Markannen injured himself while attempting a game tying three point shot ( which he missed ) as time expired during Finland's 81-78 loss to Slovenia in the 2017 FIBA Eurobasket tournament. Markannen tried to walk off the court on his own power but was unable to do so and he had to be helped out by his teammates.

Fortunately, the ankle injury wasn't that serious and Markkanen was able to play in his team's next four games. The 7 foot Arizona standout averaged 19.5 points ( 6th best in the tournament ) and 5.7 rebounds per game in a total of six games played. Markannen also shot an eye catching 47.8% from three point distance, going 11/23 from downtown during the entire tournament.

The Bulls' rookie scored at least 22 points in four of six games played and logged in double digit scoring in five games. Unfortunately for Finland, Markannen struggled during their Round of 16 knockout game against Italy. He scored just four points on 2-6 shooting from the field.

Prior to the knockout game against Italy, Markannen was dominating the tournament along with Knicks unicorn Kristaps Porzingis. Markannen made 55% of his shots including 50% of his three pointers while averaging 22.6 points per game. Despite his ‘ disappearing act’ in Finland's biggest game of the 2017 FIBA Eurobasket tournament, Markannen already made his mark by playing big in Finland’s victories. Most notably, Markkanen shone in the clutch of their overtime games against France and Poland.

During Finland's 86-84 upset of France in their opener, Markannen took over down the stretch, scoring 14 points in the final 3:35 of regulation and overtime. Against Poland, Markannen sank baskets to send the game to overtime and then double overtime. He finished the game with 27 points as Finland beat Poland 90-81 in 2OT. Bulls' coach Fred Hoiberg talked about that to the Chiacgo Tribune:

"He has put up great numbers but his best basketball has been played in crunch time. As a 20-year-old kid playing against some of the top European teams and making winning plays, that's a great sign."

What made Markannen impressive wasn't just his ability to take over games in the clutch but he also showed an inside-outside game that none of us really saw at Arizona. We knew that his stroke was pure but at the Eurobasket, he showed good post up moves and often blew by his defenders of the dribble. This revelation should make the Chicago Bulls coach Fred Hoiberg grin from ear to ear.

"He's doing a little bit of everything," Hoiberg said. "He has been labeled as just a shooter. But (with) his ability to put the ball on the floor and some of the finishes he has had at the rim where he has jumped off the wrong foot or tip-dunked, he has shown more. He has blocked shots at key moments. We're excited to get him."

The Bulls acquired Markannen as part of the Minnesota Timberwolves' package for Jimmy Butler. The Wolves drafted Markannen 7th overall in the 2017 NBA Draft after an impressive career at the University of Arizona. But while Markannen was always a top prospect, not many expected him to play with the kind of maturity and composure he showed in the 2017 FIBA Eurobasket tournament.

Of course this was just the Eurobasket and while there are other NBA players representing their countries in the tournament, this isn't the type of day to day opposition that Markannen will face when he plays for the Chicago Bulls starting the 2017-18 NBA season. Obviously, the level of competition in the NBA is many times better than in Europe.

Markannen will have to deal with bigger, stronger, more athletic and more physical opponents. He will have to adjust to that but having played in the NCAA ( and played well there ) , he already knows what to expect from the American brand of basketball and you bet he is ready to play in the biggest stage of all.

Aside from these factors, Markannen will also have to deal with the physically demanding 82 game home and away regular season the NBA. Although the NBA has already ‘softened’ their schedule, the idea of playing back to backs and traveling all over the U.S. is no easy task for a rookie.

But this is what training camp is all about and Chicago is definitively relieved that Markannen leaves Eurobasket unscathed and with enough time to rest and recover before heading to the Windy City.

After two mediocre seasons, Bulls VP for Operations John Paxson decided to move the team to a new direction. So the Bulls parted ways with franchise player Jimmy Butler and let Rajon Rondo go too. With the rumors of a Dwyane Wade buyout during the the season, it's clear that Chicago is on a rebuild mode.

Right now, the team has young players like Markannen, Zach Levine and Kris Dunn who were brought in from the Butler trade. Then there is also the still unsigned Nikola Mirotic and a handful of young talent. But with no clear leader and franchise player ( if Wade is bought out ), nothing much is expected of the Bulls is coming season. But if Markannen can carry his Eurobasket level of performance to the NBA, he could be the guy in Chicago as Porzingis is in New York. That remains to be seen though.

The last time Finland made basketball headlines was in 2014 when they did so for the wrong reason ( A bribery controversy reportedly helped put Finland through to the 2014 FIBA World Championships ). This time around, there is no questioning the team's success in the 2017 FIBA Eurobasket. They beat France, nearly shot down Slovenia, toppled Greece and finished second in their Group would a 4-2 record.

The future really looks bright for Finland with Markannen at the helm because he will only continue to improve as he logs in more games. The future is equally brighter for the Chicago Bulls who right now look like they got more than what they expected from the Jimmy Butler deal.