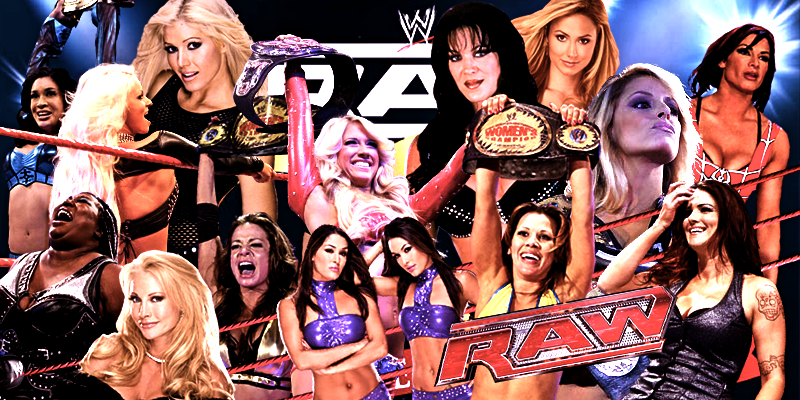 Pro wrestling isn’t just the brute and muscles of its popular male superstars. It’s also home to the best and yes, the hottest women in sports. The WWE calls them Divas, the divas of their universe. In the history of the sport, we’ve seen countless divas come and go. But here are a few that wouldn’t just go away from our thoughts.

Here are the hottest woman wrestlers of all time: 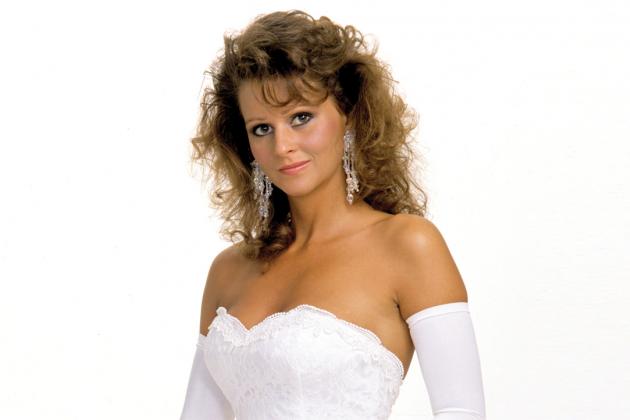 Miss Elizabeth was one of the WWE’s original divas. Unlike most however, she wasn’t the one who wore skimpy outfits or two-piece bikinis all over the place. She was pretty, demure, conservative and dressed glamorously like a movie star. Surprisingly, that was what made her one of the hottest women in the WWF during her time and the first name on our list, funny fact there are more than 1000 searchs a month for people looking for miss elizabeth nude pics haha!

Born as Elizabeth Ann Hulette on November 19, 1960, this lovely diva started working at the International Championship Wrestling shows where she met and later married the iconic WWF wrestler Randy ‘Macho Man’ Savage. Miss Elizabeth not only became Macho Man’s real life wife, she also was his manager during his famous tenure in the WWF. Aside from Macho Man, Elizabeth also worked with top wrestlers like Lex Luger, Kevin Nash, Ric Flair and Hulk Hogan. Her association with the top wrestlers of her generation made her hotter all the more. 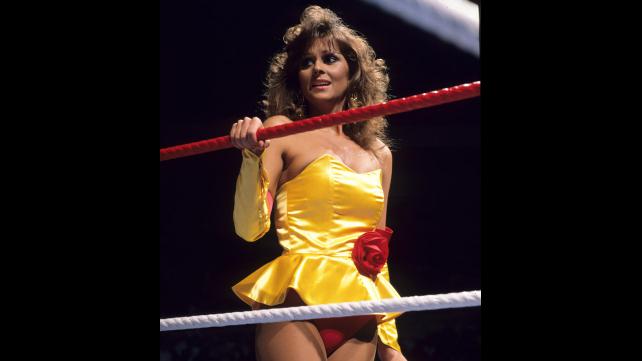 Unknown to many, Miss Elizabeth was a Communications graduate at the University of Kentucky. She briefly worked with ESPN as a reporter for Speed Boat events in between her stint at the WWF and WCW. Elizabeth didn’t wrestle in the WWF but she did thrice at WCW, drawing twice and losing once. Nevertheless, Miss Elizabeth was so damn gorgeous not to include in this list. Unfortunately, she died of an alcohol overdose in 2003 in the home she shared with Lex Luger. 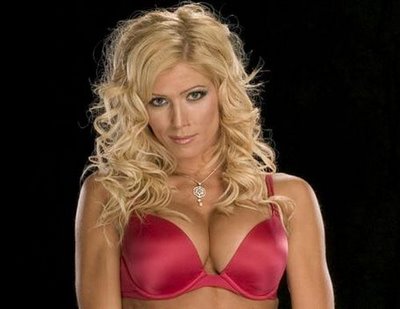 They say that if you have it, you’ve got to flaunt it. Well I guess Torrie Wilson lived those words.
Born in Boise, Idaho, Torrie Marie Wilson’s stint in Pro Wrestling was accidental. Or was it fate? While young Torrie was accompanying her boyfriend at a WCW event, she was asked to walk out Scott Steiner to the ring. The rest as they say is history. She stayed with the WCW until its purchase by the WWE and became one of its regular divas. Wilson used her sex appeal to her full advantage. She was blonde, sexy and hot. This got her involved in many storylines including steamy ones with the boss Vince McMahon. Torrie is well known for her feud with Dawn Marie and actively competed until her retirement in 2008.

Aside from being a wrestler, Torrie Wilson is also a model and fitness competitor. In 1998, Wilson won First place in the Women’s Tri Fitness competition, winning in the category of physique and grace. During that same year, she took acting lessons and moved to Los Angeles where she was able to get several minor acting jobs.

Torrie appeared twice in Playboy ( May 2003 and March 2004 with Sable ) and once in FHM ( September 2006 ). She’s also competed in many of the WWE’s sexiest titled bouts including the Playboy Pillow Fight match, Playboy Evening Gown match, Bra and Panties match and many more.

Oh yeah that’s Torrie. She was a girl who wasn’t afraid to show her ass-ets at all. Need we say more? 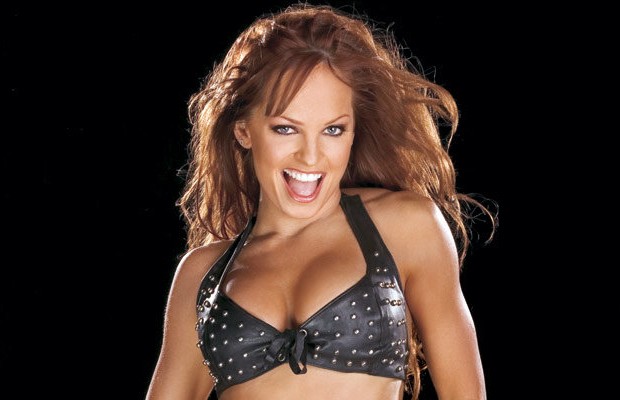 If you wonder where the word ‘Diva’ began in the WWE, it was with Christy Hemme.

In 2003, the WWE started its series of Diva Search competitions. Although the first winner of the first competition was Jaime Koeppe, she wasn’t offered a WWE contract but was only given a photoshoot for WWE Magazine. The following year, Christy Hemme won and she was awarded a $250,000 contract with the promotion as her prize.

She started her WWE career on the Raw roster and quickly gained popularity for her rivalry with then WWE Women’s champion Trish Stratus, earning an unsuccessful title challenge in the process. Like the other hot woman wrestlers, Hemme had her share of appearances in Bra and Panties matches and Lingerie Pillow fight contests.

Aside from wrestling, Hemme competed in the 2006 Lingerie Bowl as a quarterback for the Chicago Bliss of the Lingerie Football League. She also posed nude for the organization’s magazine after getting permission from her father who once asked her not to pose nude. That magazine spread would be the first of many. 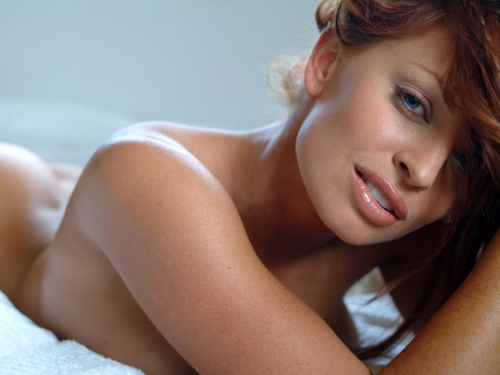 In case you didn’t know, one of Christy’s early jobs was as a waitress at Hooters. Christy also worked for a burlesque dance group called ‘Purrfect Angelz’ which performed at Harley motorcycle shows and Easyrider tours. If you want to see hotter images of her, Christy Hemme also appeared on the cover of Playboy’s April 2005 issue. She also graced the cover of other magazines such as Rolling Stone, Maxim and Stuff. Surely, this was one Diva who had the real stuff. 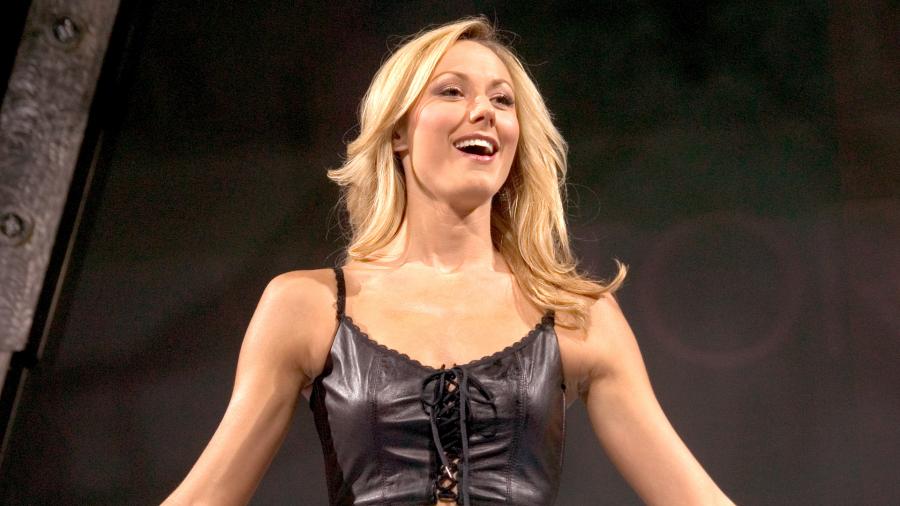 Like Torrie Wilson, Stacey Kiebler’s career as a woman wrestler wasn’t planned. Kiebler was spotted by WCW officials in the crowd, watching the show with boyfriend Kris Cumberland. Stacey joined WCW as part of the Nitro Girls Dance Troupe after earning her spot by beating 300 competitors for a $10,000 check. Her one and a half minute dance routine was watched by over 4.4M viewers according to the Nielsen Media Research. At 5-11 with a long slender frame, sweet girlish voice and stunning good looks, Stacey Kiebler became the eye candy for WCW and later for the WWE when the latter purchased the WCW.

With her long and shapely legs, Kiebler was the WWE’s tallest diva. Her legs were considered as ‘weapons of mass seduction’ in the WWE. But although it was being a woman wrestler that gained her fame, what made Stacey stand out was her ability to shine outside the wrestling ring. Kiebler was a contestant in the second season of Dancing With The Stars where she placed third. She also appeared in numerous ABC shows such as What About Brian, George Lopez and October Road. She was also part of the 100th episode of CBS’ How I Met Your Mother where she played as a bartender. Stacey also made appearances on USA Network’s show Psych. She also auditioned and bagged a role for the movie Big Momma’s House 2 although she decided not to take the role later.

She also appeared in the cover of magazines like Maxim and Stuff. In 2008, she ranked #64 in FHM’s yearly 100 sexiest list. That year, she was also named the ‘World’s Hottest Athlete’ by InGameNow.

Stacey was best known in the WWE for her ‘bend’ ring entrance ( or exit ). You can see why. Before we forget too, Kiebler dated the former world’s most eligible bachelor George Clooney. The two were in a relationship from 2011 to 2013. Now that’s hot. 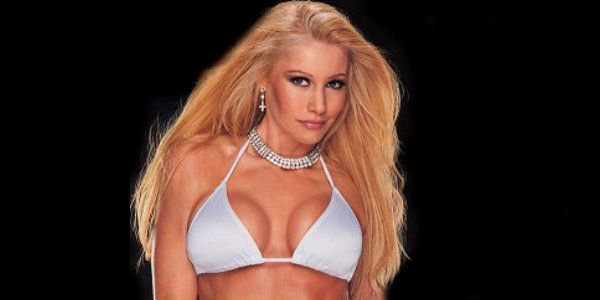 What warm blooded WWF fan doesn’t know Sable? She was the goddess of wrestling during her prime.

Born Reena Greek, Sable began her career as a model for companies like L’Oreal, Pepsi and Guess. At Wrestlemania XII in 1996, she made her first WWF appearance, escorting Triple-H as he took on the Ultimate Warrior. The appearance with Helmsley earned her first storyline which was a feud between Triple-H and her real-life husband Marc Mero. But Sable didn’t just earn her stripes at the WWE for being a trophy babe. She later became the 2nd ever WWF Women’s champion after the company reinstated the title.

Sable has been featured in Playboy thrice and the magazine’s April 1999 issue with her on the cover is one of its highest selling issues of all-time. She also appeared in Playboy later that year, making her the first ever woman to be given two Playboy covers in the same year. Now that’s a testament to Sable’s sex appeal.

After divorcing Mero in 2004, Sable got hooked with Brock Lesnar. She married Lesnar in 2006 ( they are still married right now ) and they have two kids Turk and Duke. She is also an awesome stepmom to Lesnar’s daughter Mya Lynn. That’s special. Three playboy appearances and being married to a man who was once the Baddest Man on the Planet? Sable’s super special. 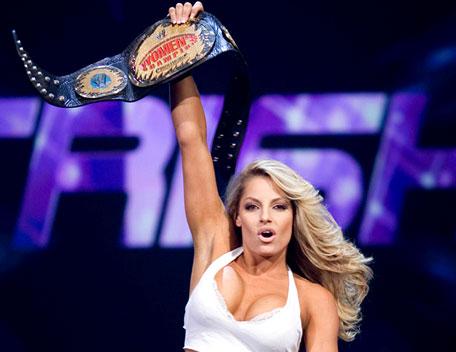 If you ask 10 men who the hottest woman wrestler of all-time is, chances are all of them will say Trish Stratus.

Trish Stratus was the childhood crush of many wrestling fans, if not all. Oozing with sex appeal, Stratus became popular as the big chested valet for Test and Albert. However, she would prove herself as the best female wrestler of the past 20 years and the greatest female wrestler in WWE history by winning the Women’s title a record seven times and the Hardcore title once. Her 6th reign as champion was the longest ever in the history of the promotion at 448 days. Trish was named as ‘Babe of the Year’ thrice and Diva of the Decade prior to her retirement in 2006. She was inducted to the WWE Hall of Fame in 2013 at the age of 37, making her the youngest wrestler, male or female, to be inducted.

But Trish Stratus wasn’t just all-wrestler. She was also the sex symbol of her generation. Unlike the other top divas though, she never posed for Playboy, making her even more the fantasy of male fans and wrestlers alike.

After her retirement from pro wrestling, Trish Stratus remained in the spotlight. From 2006-2007, she appeared in CBS’ reality show Armed and Famous. She then became a host for The Second City’s Next Comedy legend, with Stratus playing the role of contact between the judges and contestants, ala Tyra Banks in America’s Next Top Model. She is also the host of Stratusphere on the Travel + Escape channel. She also appeared in the 2015 film Gridlocked. In other media, Trish appeared in a record 20 WWE video games. She also opened a yoga studio called Stratusphere in Ontario, Canada. The studio won best Yoga Studio in 2013. She is also involved with several charities including The Special Olympics, Ronald McDonald House and Dreams Take Flight.