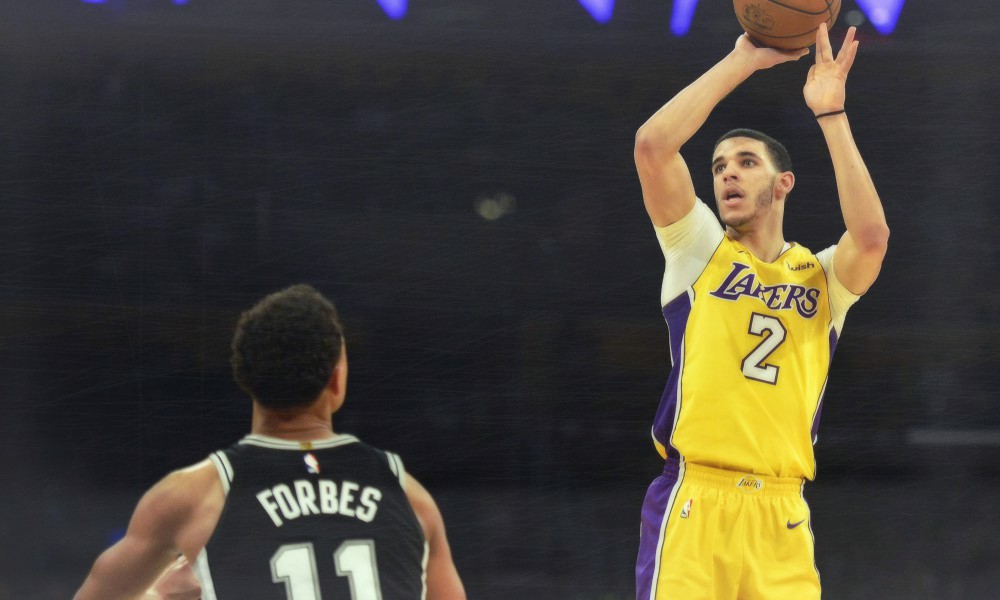 The Lakers Are Winning And Lonzo’s Shot Are Now Falling

While Ball was good as advertised in terms of his court vision and passing skills, he failed miserably in his ability to score. Much of the blame and criticism centered on Ball’s ‘ugly’ shooting form and while he ( and the Lakers ) insisted that his shot needed no tweaking, there were serious doubts that his unconventional form was going to work for him on the highest level.

Ball shot 28.6% from beyond the arc in October and 24.3% in November. Not only that, his overall shooting percentages were 33.3% and 30.4% during the first two months of the 2017-18 NBA season. Worse, his free throw shooting was also abysmal. He never shot more than 55% from the line during his first three months in the league.

But after a six week leave of absence due to an MCL injury, Lonzo Ball has shot the ball relatively well. Compared to his numbers before the injury, he’s shown dramatic improvement, especially from behind the three point area. Sure, there’s the story of him losing to rapper Bow Wow in a shooting contest. But make no mistake, Lonzo Ball can shoot and he’s beginning to show that to the world. 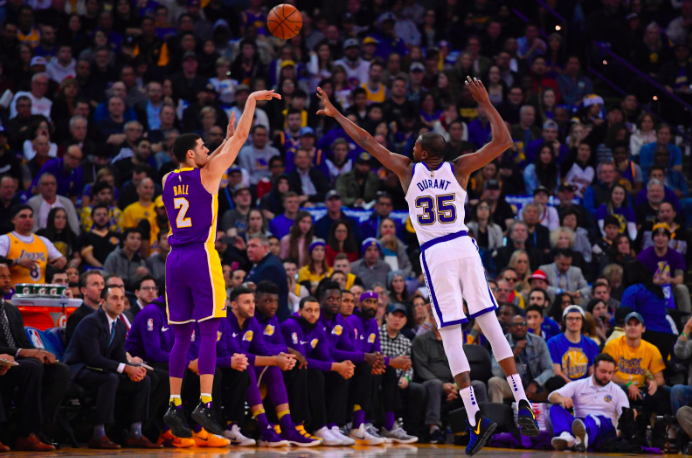 Back when he was missing badly and shooting bricks, Lonzo said that his shooting woes were ‘just in his head’. He always insisted that he could shoot and that it would only be a matter of time when his shots would start falling, especially since how hard he worked on his shot before and after games.

He just kept on shooting despite his struggles and now they are going in. Said Lonzo before the Lakers’ played Miami last Thursday:

"I can shoot. I just missed at the beginning of the year. I told you I was going to keep shooting, and now they are going in."

Aside from him starting to hit his outside shots, what’s been surprising about Lonzo Ball is his defensive ability and impact to the team. Ball has the best defensive rating among his Lakers’ teammates. His 1.8 defensive win shares this season is the highest in the team, tied with Brandon Ingram. The Lakers give up 111.6 points per 100 possessions with him off the court but only 105.1 when he is playing.

At 6-5, Ball is the second best rebounder in his team, behind Julius Randle. His 1.6 steals per game is tops on his squad and second best among rookies. If he only played the minimum number of games to qualify among league leaders, Ball would be ranked 13th in the entire NBA in steals. His 32 total blocks this season is 4th most among all Lakers and is 10th best among NBA rookies.

Ball also has very active hands. Lonzo’s 2.7 deflections per game is 22nd among all NBA players. His 1.3 looseballs recovered also ranks 23rd in the entire league. These hustle numbers plus the fact that Ball loves to advance the ball to the frontcourt at the first available pass have made the Lakers the 2nd best fastbreak team in the NBA at 17.4 fastbreak points per game, just behind the defending champions Golden State Warriors who are at 20.5 points per game. 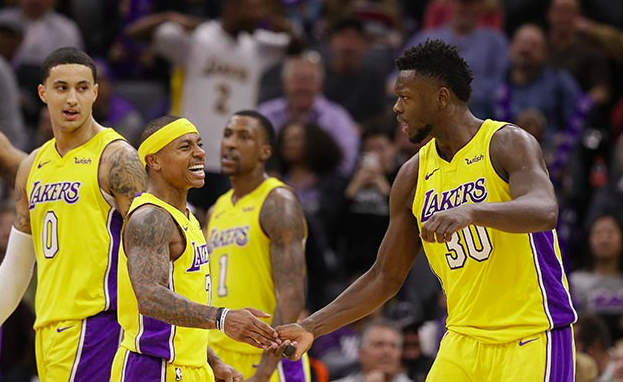 When Lonzo Ball got injured, the Lakers turned to Brandon Ingram and Julius Randle for scoring. Since then, both forwards have been the focal point of the Lakers offense. And it’s worked for Luke Walton. The Lakers have won 4 in a row, are 7-3 in their last 10 games and 13-7 in their last 20 games.

Currently, the Lakers are 27-34 and have won one more game this year than they did last season when they finished at 26-56. The 27 wins have tied their most wins in a season since 2014 and they still have 21 games left to play. Of course you can say that Lonzo Ball has played just 39 games this season and missed the part when they found their rhythm and started to win games. But hasn’t his ability to push the ball up court fast and pass first mentality rubbed off on his teammates while he was away? You can ask every Laker. They love playing with Lonzo. Who doesn’t when the guy consistently gives you the ball at the best possible spot you can get it?

"It's great, like I said it's contagious how he plays," Julius Randle said. "Everybody gets the ball, he's always looking to make plays for other guys."

The Lakers are 4-0 since Lonzo’s return and 3-0 in games where he’s played. And with his minutes restriction slowly getting removed, you bet the Lakers will keep on rolling. Let’s not forget too that the newly acquired Isaiah Thomas has also found his mark as of late, hence the Lakers are getting a big lift too from I.T.

What’s noticeable though since his return from injury is that the eye of the microscope is no longer on Lonzo Ball. His loudmouth dad is busy with his younger brothers in Lithuania ( Maybe Lavar should stay in Lithuania for good! ) Much of the Lakers’ headlines are focused on Isaiah Thomas’ return to form and Julius Randle’s ascendance since the trade deadline.

While the cameras are off him and the headlines not about him, Lonzo Ball has been playing very solid basketball. In fact, coach Luke Walton called him the best player on the court after the Lakers’ 131-113 win against the Heat on Thursday:

"He's one of the very unique players, it doesn't matter if he's taking shots, scoring 20 a game or not, he can impact the game from all over," Walton said on Thursday. "He was doing that for us tonight. All around probably, in my opinion, the best player on the floor tonight."

Sure, Lonzo was just 3-5 rom the field with two three pointers and 8 total points. But he also had 6 rebounds, 7 assists and 6 steals. He was a team high +24 on the floor against the Heat and more importantly, the Lakers won the game. 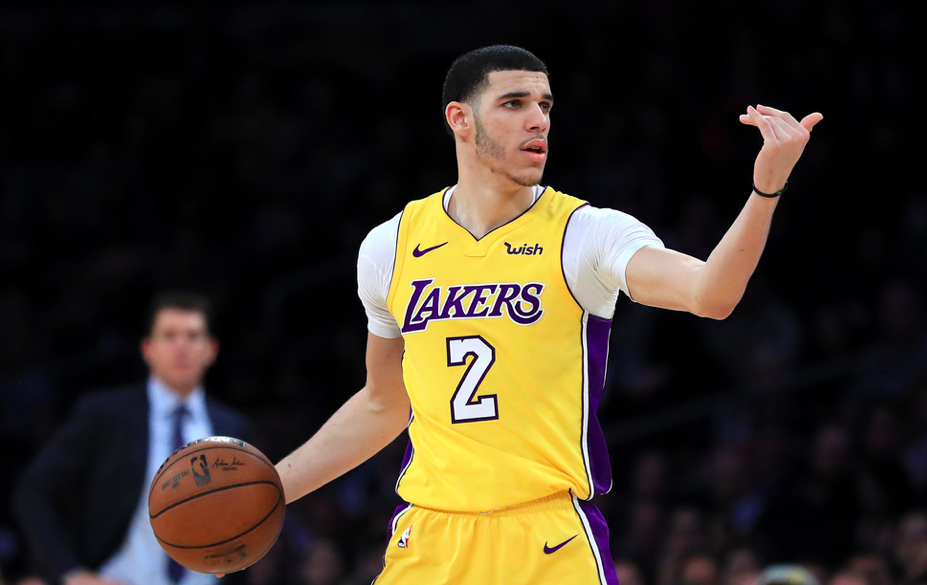 Unlike most of his peers who play to impress with fancy stats, Lonzo Ball is there to win. Said Miami Heat superstar Dwyane Wade to Lakers reporter Mike Trudell after the Lakers beat the Heat 131-113 on Thursday night:

“I have been a big fan of him. I watched him play in college. He has a great feel of the game and he doesn’t play for statistics, he plays to win. He moves the ball and his IQ of the game is incredible. He’s athletic. Everyone talks about his shot, but he has been shooting that way his whole life. He can knock shots down. He is good, man, he is a good basketball player. Everyone expects him to come in and be Kobe Bryant, but Kobe Bryant wasn’t Kobe Bryant when he came in. He had to work to it. So he has a long career, hopefully, in front of him and we will see how it shakes out.”

We all remember how Bryant struggled in his first season with the Lakers. We remember his playoff struggles when he threw up those air balls against the Utah Jazz. But we also know where he ended up. We’re not saying that Lonzo Ball is going to be as great as Kobe Bryant. Most probably, he won’t even be near Black Mamba status.

We’re not even sure if he’s going to break all the records that Magic Johnson boasted about after the draft. It’s even unclear right now if he is going to be the face of the franchise for years to come. What’s sure is that he can play and he can shoot. He has the tools to be a star. More importantly, he plays to win. Winning is all that matters really and for as long as the Lakers win with him, that’s the main thing that matters.