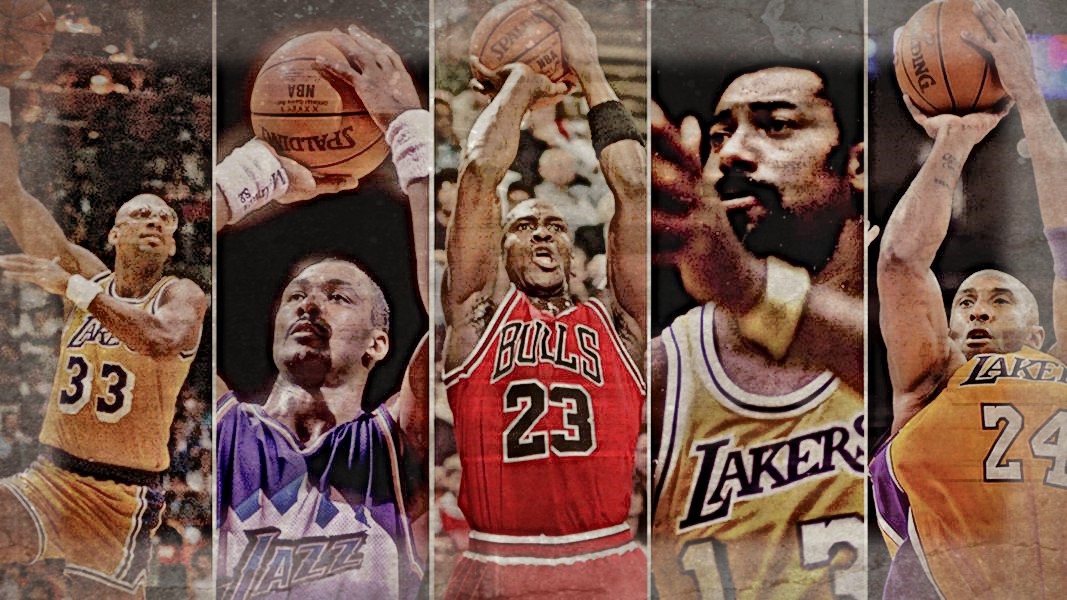 The Magnificent Seven: The Seven Players on Top Of The NBA’s All-Time Scoring List

LeBron James recently became the latest member of the NBA’s 30,000 career points club. Heading to the Cleveland Cavaliers January 23, 2018 game against the San Antonio Spurs, King James needed seven points to reach that career milestone. While the Cavs lost to the Spurs 114-102 in San Antonio, James scored 28 points to become the 7th player in NBA history to score at least 30,000 career points.

At age 33 years and 24 days, James became the youngest player to reach the plateau, eclipsing the mark previously set by former Los Angeles Lakers guard Kobe Bryant who reached the mark at 34 years and 104 days. In addition, James also became the first player in NBA history to score at least 30,000 points, grab 7,000 rebounds and issue 7,000 assists.

But while James’ accomplishment was momentous, it remains to be seen if he will become the NBA’s all-time scoring leader. That distinction currently belongs to the legendary Kareem Abdul Jabbar who sits at the top of the mountain. While Jabbar wasn’t known as a scoring machine, he mixed longevity with two decades of excellence to become the top scorer in the history of the NBA. 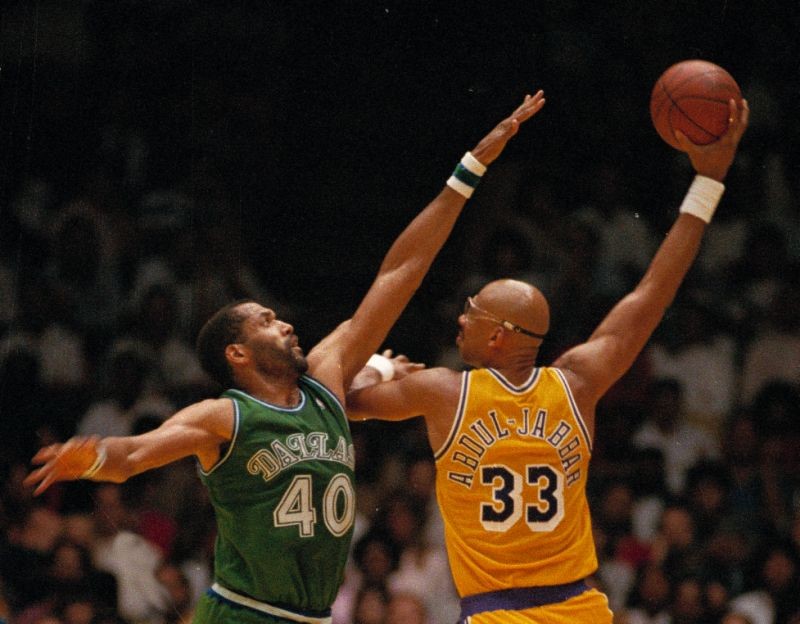 One of the most accomplished basketball players of all-time, Kareem Abdul Jabbar sits on top of the NBA’s scoring mountain with a career total of 38,387 points. Jabbar played until he was 41 and even at that age, he still averaged in double figure scoring. In fact, Kareem averaged in double digits scoring in every season of his NBA career.

Originator of the skyhook, the most unguardable shot in the game of basketball, Jabbar’s success began in high school when his high school team won 71 consecutive games. In college, he led UCLA to three consecutive NCAA titles and won three NCAA tournament MVP awards. Drafted 1st overall in 1969 by the Milwaukee Bucks, he won his first NBA title at the age of 24. In 1971, he changed his name from Lew Alcindor to Kareem Abdul Jabbar. He was traded to the Los Angeles Lakers in 1975 where he became one of the key players of “Showtime”.

In 20 NBA seasons, Jabbar led his team to the playoffs 18 times, including 14 times past the first round of the playoffs and 10 times in the NBA finals. Jabbar won a record six MVP awards, he was a record 19-time All-Star selection, 15 times on the All-NBA team, two time Finals MVP and six-time NBA champion as a player ( plus two as assistant coach ). Known as the ‘Greatest college player in history’, Captain Skyhook is also the greatest scorer in NBA history. 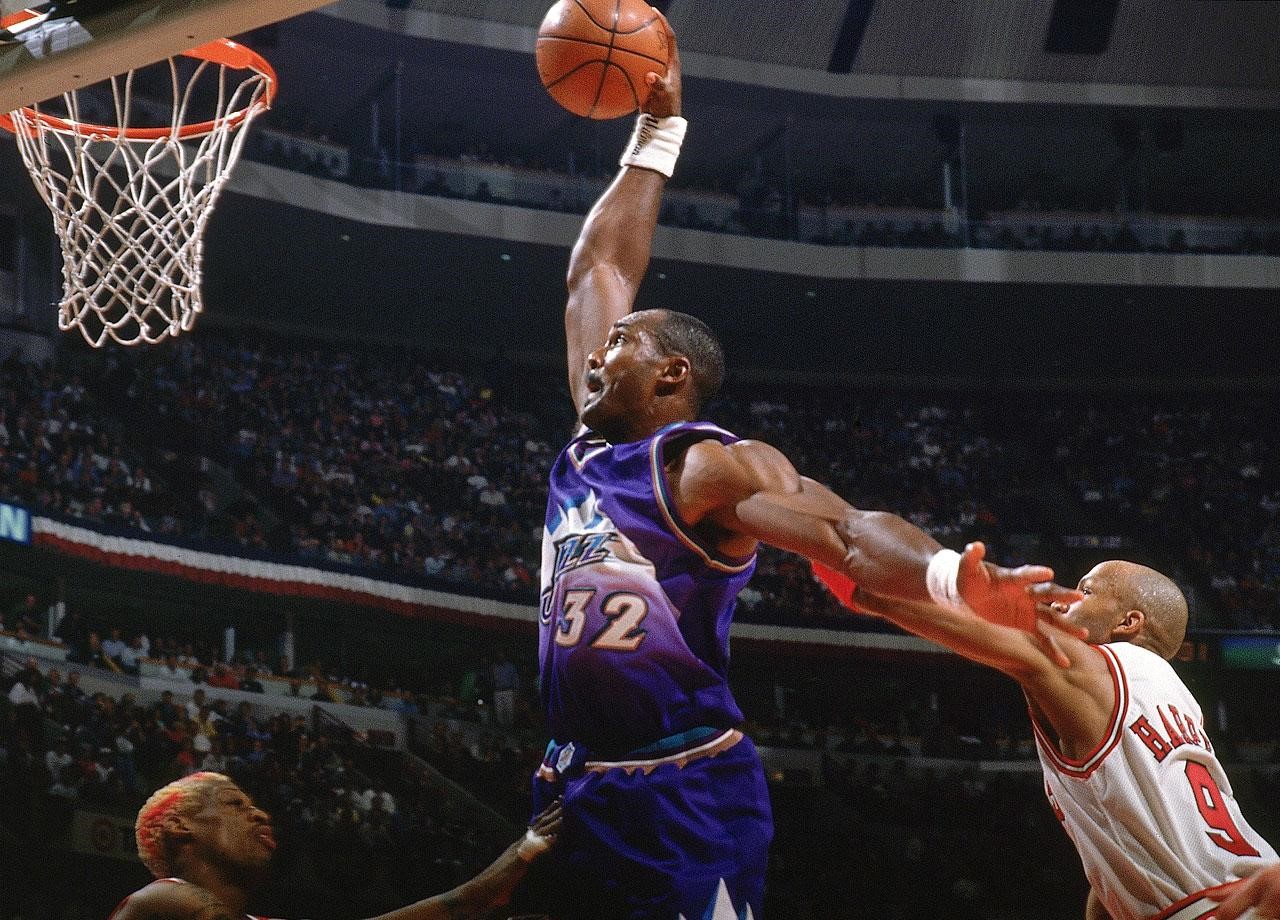 The Mailman always delivers. And this Mailman delivered the goods for the Utah Jazz for 18 seasons. Drafted by the Utah Jazz with the 13th overall pick in 1985, Karl Malone established a reputation as one of the most bruising players in NBA history. He literally defined the position power forward with his brute strength in rebounding, tough defense and uncanny ability to score. Malone and point guard John Stockton are considered one of the greatest duos in the history of the NBA.

Malone’s individual success also translated into team success. In each season of his NBA career, his teams reached the playoffs including the NBA Finals in 1997, 1998 and 2004. And although he never won the NBA title, Malone is considered one of the greatest ever to put on a basketball shoe.

The Mailman played on the original Dream Team in 1992 and represented the United States again in 1996. He won Olympic gold both times. He was a two-time NBA MVP, two time All-Star Game MVP, a 14-time NBA All-Star selection and an 11-time member of the All-NBA First Team. 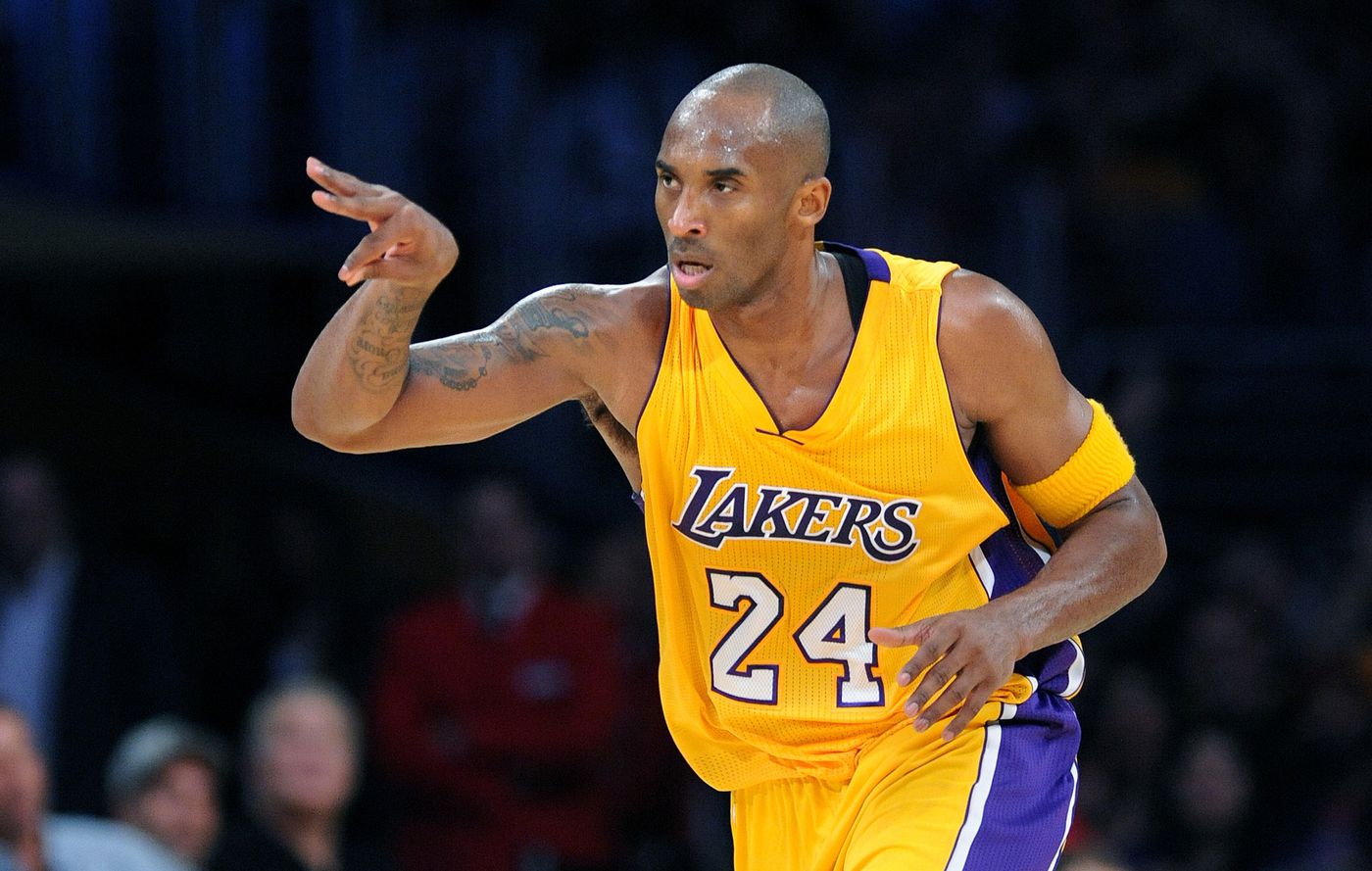 Who doesn’t know Kobe Bryant? He is perhaps the greatest basketball player of this generation and the bridge between Michael Jordan’s era and the current era of NBA stars.
Known as the Black Mamba for his near perfect kill rate, Bryant is one of the best scorers of modern era. He is known for coming up big in the clutch and his ability to deliver killer blows and winning baskets. The greatest Laker of all-time is the first guard in NBA history to play 20 seasons. He also holds the record for having played the most seasons with a single franchise.

Bryant was a diamond in the rough when the Lakers traded for him on Draft Night. Drafted by the Charlotte Hornets with the 13th pick in 1996, he was shipped to Los Angeles for Vlade Divac. As an 18 year old high school phenom, he didn’t make an immediate impact. But once he got into his rhythm, he never looked back. Bryant led the Lakers to five NBA titles, three with Shaquille O’Neal from 2000-2002 and two with Pau Gasol in 2009-2010.

In the final regular season game of his NBA career, Bryant scored an incredible 60 points. He also owns the second highest single game points total of all-time with his 81 point performance against the Toronto Raptors in 2006. Aside from being the 2008 NBA MVP, Bryant was also All-Star Game MVP 4 times, All-Star 18 times, All-NBA First team 11 times, All-NBA Defensive First Team 9 times and NBA scoring champion in 2006 and 2007. 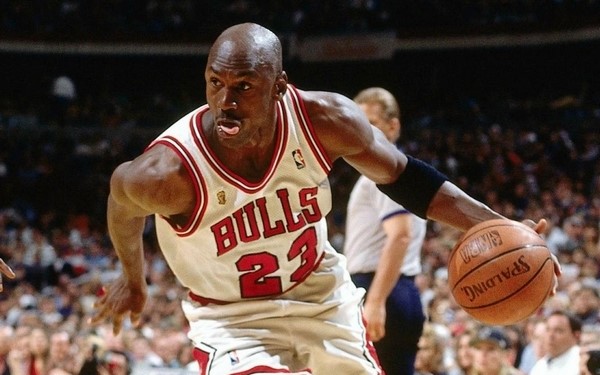 The greatest player to ever play the game, no doubt. The only reason why Michael Jordan isn’t the NBA’s all-time scoring leader is because he didn’t play long enough in the NBA. In fact, Jordan took two years off from basketball in the middle of his playing career, to pursue his lifelong dream of playing major league baseball during one year and to become team owner of an NBA franchise in another year. In all, Jordan played only 15 NBA seasons, yet he still sits at #4 on this list. That’s how good a scorer he was.

Air Jordan first captivated NBA fans with his breathtaking dunks, high flying moves and high scoring games. But Jordan eventually graduated from being just the most exciting player in the NBA to its greatest when he led his Chicago Bulls to a total of six NBA titles during an incredible seven year run. The only year the Bulls didn’t win the title was when MJ retired for the first time to play baseball. 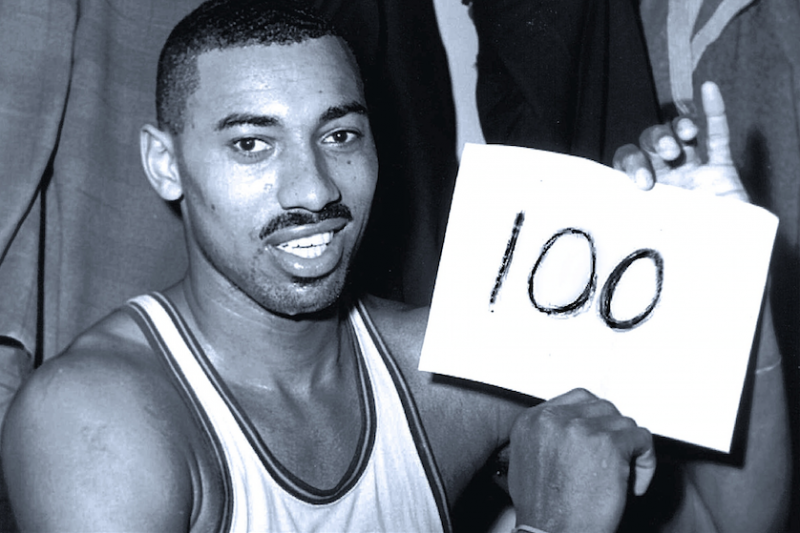 The photo says it all and sums up Wilt Chamberlain’s dominance. The guy scored 100 points in a single game on March 2, 1962. That’s correct, 100 points in ONE game. That’s amazing. But so was Wilt. He was physically imposing at 7-1 and around 270 pounds. He was a dominator on both ends of the court. Over the course of his career, he won 7 scoring titles, 11 rebounding titles and even led the league in assists once.

Wilt the Stilt won two NBA titles and was Finals MVP in 1972. He also won 4 MVP awards, one All-Star Game MVP, 13 time All-Star, 7-time All-NBA First team selection and NBA Rookie of the Year in 1960. He was a lifelong bachelor and aside from being one of the greatest scorers in the basketball court, he was one of the greatest scorers outside it too. Chamberlain claimed to have sexual intercourse with at least 20,000 women. 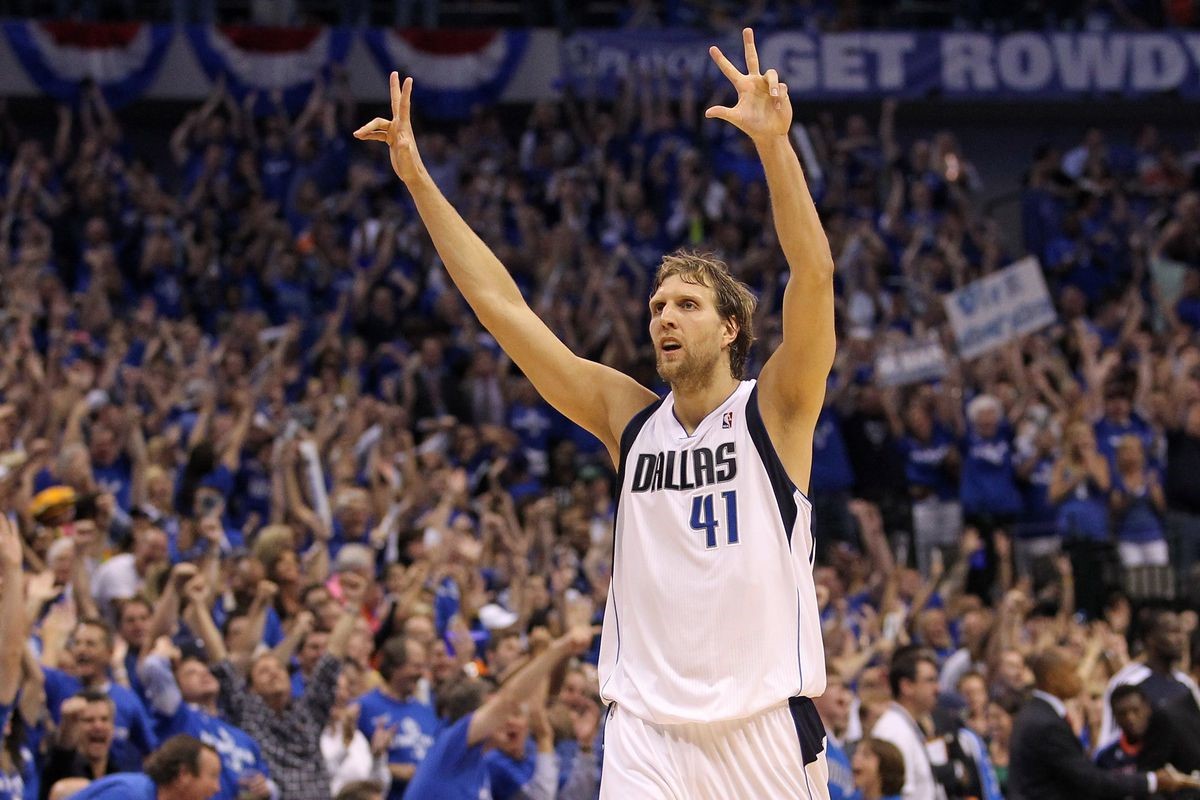 The critics who called him too soft when he first entered the NBA must be hiding right now. That’s because Dirk Nowitzki overcame every barrier placed in front of him to become one of the greatest all-time scorers in NBA history.

Drafted 9th overall in 1998, Nowitzki was traded on draft night for the late Robert Traylor. Some said his game and build would never succeed in a physical league like the NBA. But he defied the odds and redefined the game. Nowitzki would become the prototype for the stretch four, a power forward who could stretch the defenses by hitting the three ball. Nowitzki was so good and effective that he became the yardstick for power forwards in the league.

In his most glorious season, he won the NBA title in 2011 as well as the NBA MVP award. Dirk is also a 13-time All-Star, 4 time All-NBA First team selection, the NBA’s Three Point King in 2006 and the NBA Shooting Stars champion in 2010. Outside the NBA, Dirk was EuroBasket MVP in 2005 and FIBA World Cup MVP in 2002. 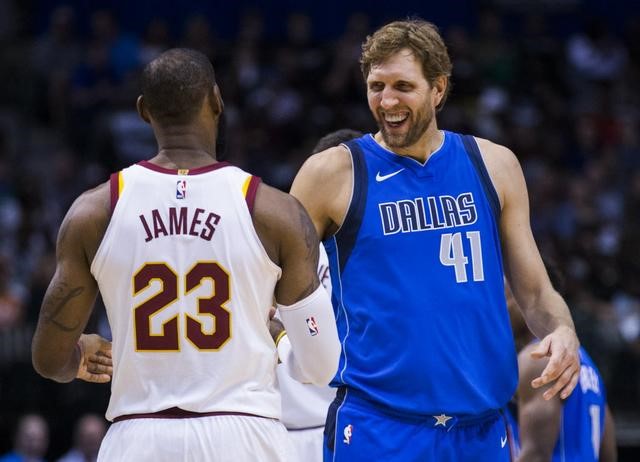 As we said in the first part of this article, James joined the elite 30,000 scoring club on January 23rd. Only he and Nowitzki are the active players in the Top 10 of the NBA’s scoring list. The next active player on the NBA all-time scoring list is the Oklahoma City Thunder’s Carmelo Anthony who currently sits at #25.

The oldest player currently playing in the NBA is the Sacramento Kings’ Vince Carter. Carter is the next active player on the scoring list and he is followed by the Cavs’ Dwyane Wade at #37 and the Spurs’ Pau Gasol at # 43. Kevin Durant of the Golden State Warriors is currently 46th on the NBA’s all-time scoring list. Durant became the second youngest player in NBA history to score 20,000 points. The youngest? LeBron James.

Aside from James and Durant, the only other players in NBA history to reach the 20,000 before the age of 30 are Kobe Bryant, Wilt Chamberlain and Michael Jordan. As we saw in the scoring list, those three players are in the Top 5 so there’s a chance that Durant and James are going to dislodge a couple of players there, that is of course if both stay healthy and play for years to come.

Whether either goes on to break Kareem’s record is another story though. Abdul Jabbar has since been the barometer for longevity and excellence combined. It may not be one of the NBA records that are considered as unbreakable but in recent years, we’ve seen the likes of Karl Malone and Kobe Bryant come up short in topping it.