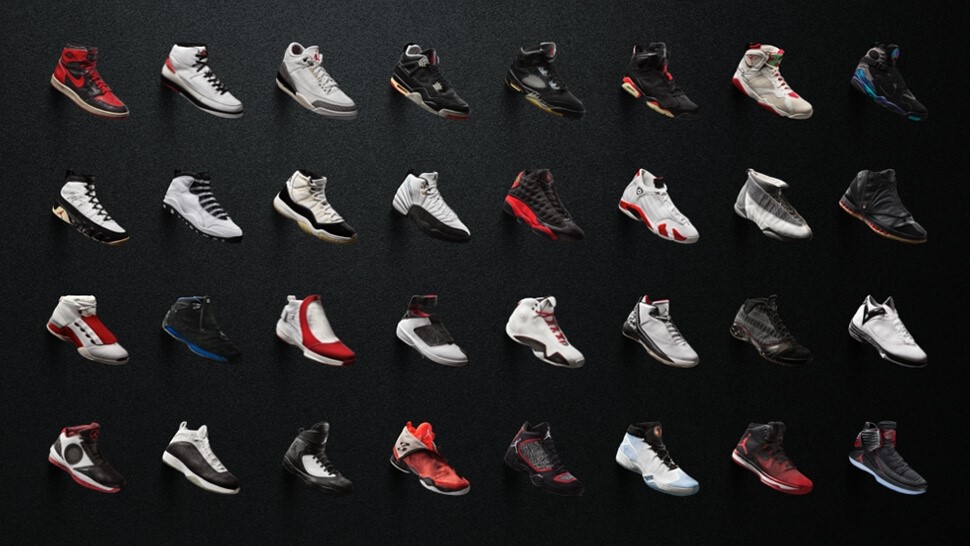 The Most Expensive Air Jordans

In the early 80’s Nike wasa struggling running shoe company looking for a way to reinvent itself to tap into the sneaker market. The shoe industry wasn’t a booming business in basketball. Sneakers weren’t a big thing in the NBA. We were used to seeing most players wear the same Converse and Adidas shoes.

Then in 1984, the sneaker revolution began in the NBA when Nike struck gold after they signed rookie Michael Jordan of the Chicago Bulls to a five year shoe endorsement deal worth $2.5M plus royalties. The deal was considered absurd at that time because Nike was thought to have paid a hefty price for a player who had no proven track record yet. But Michael Jordan wasn’t just an ordinary rookie.

Jordan was the former North Carolina Tar Heel who hit the game winning jumper in the 1982 NCAA Finals. He played on the 1984 Olympic basketball team and was drafted 3rd overall in 1984 by the Chicago Bulls. Jordan electrified the NBA crowd with his high flying moves and rim rattling dunks. He would capture the imagination of the world and become the most popular basketball figure in the planet.

At first Jordan, didn’t want to sign with Nike because Adidas and Converse were the top basketball shoe makers at that time. After all, he played with Converse when he was in North Carolina. But after Nike presented the concept of a signature “Air Jordan” shoe for him, Jordan finally signed with Nike. The rest is history.

The Air Jordan 1 was an instant hit, especially since it became notorious for earning the ire of the NBA for not conforming to shoe color standards. Because of that, the shoe was banned and Jordan was fined $5,000 per game for using it. The controversy of the Air Jordan 1 plus Michael’s spectacular rookie season made the shoe an instant legend.

Because the Air Jordan line had become Nike’s biggest shoe business, they decided to create a separate a separate brand to make it a sub-brand of Nike. Hence, the Jordan Brand was born in 1997. From that time on, the Air Jordans no longer used Nike’s swoosh logo but instead featured the Jumpman logo as we now know it.

. The Air Jordan XXXII was released in October 2017 as the 32nd version of the original Air Jordan 1. Thirty two later, the Air Jordan shoe and the Jordan Brand is as strong as ever, despite Michael Jordan retiring from the NBA for more than a decade now.

The Jordans are among the most expensive shoes in the market today. There were also Air Jordans who sold for a much higher price than the others, some at even ridiculous prices.

Here are the most expensive Air Jordans ever sold: 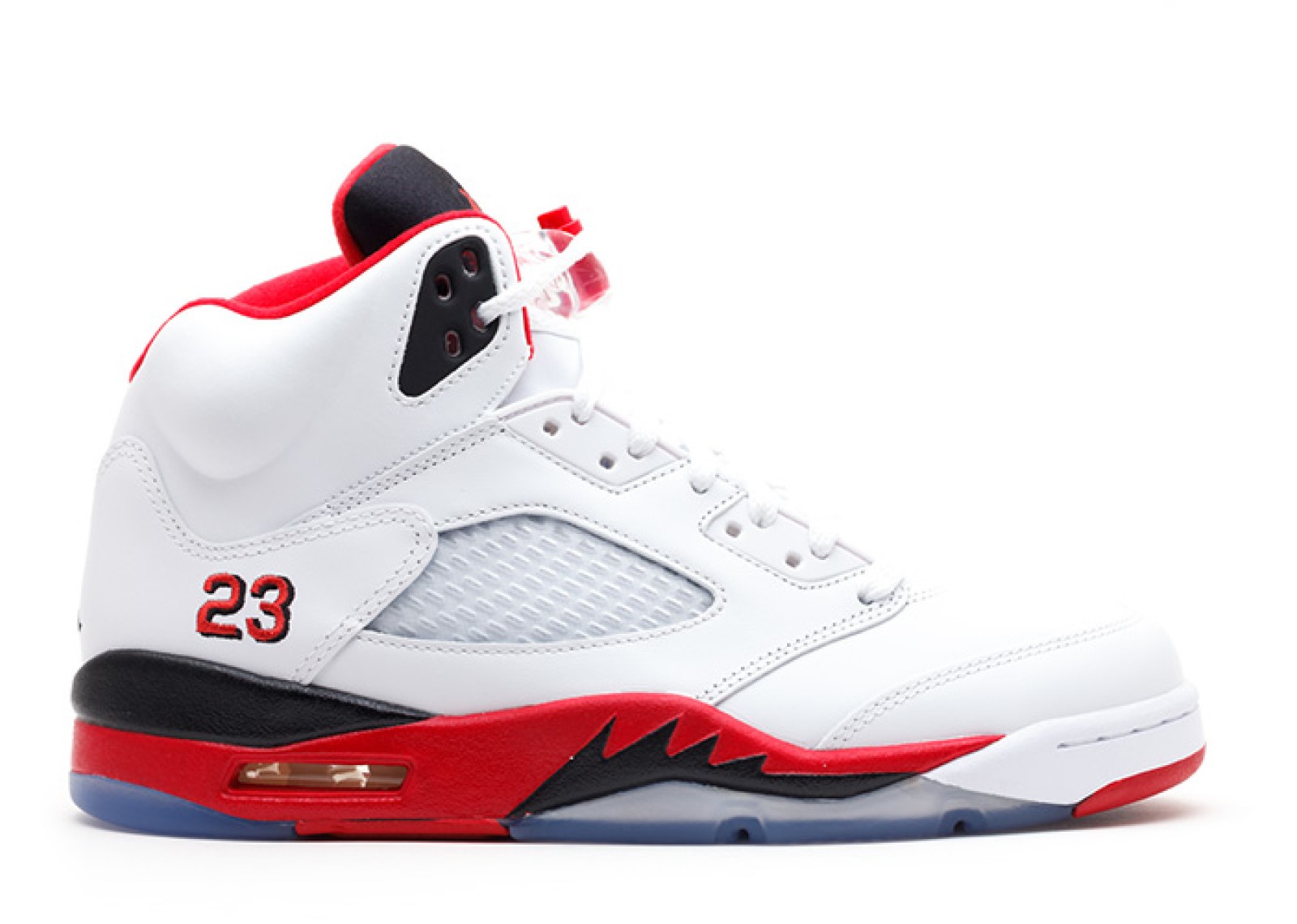 Inspired by World War II fighter planes, the Air Jordan 5 was the first basketball sneakers to have lace locks. Its has a shark mouth like design at the nose that makes it very appealing. It also had MJ’s jersey number 23 at the side. 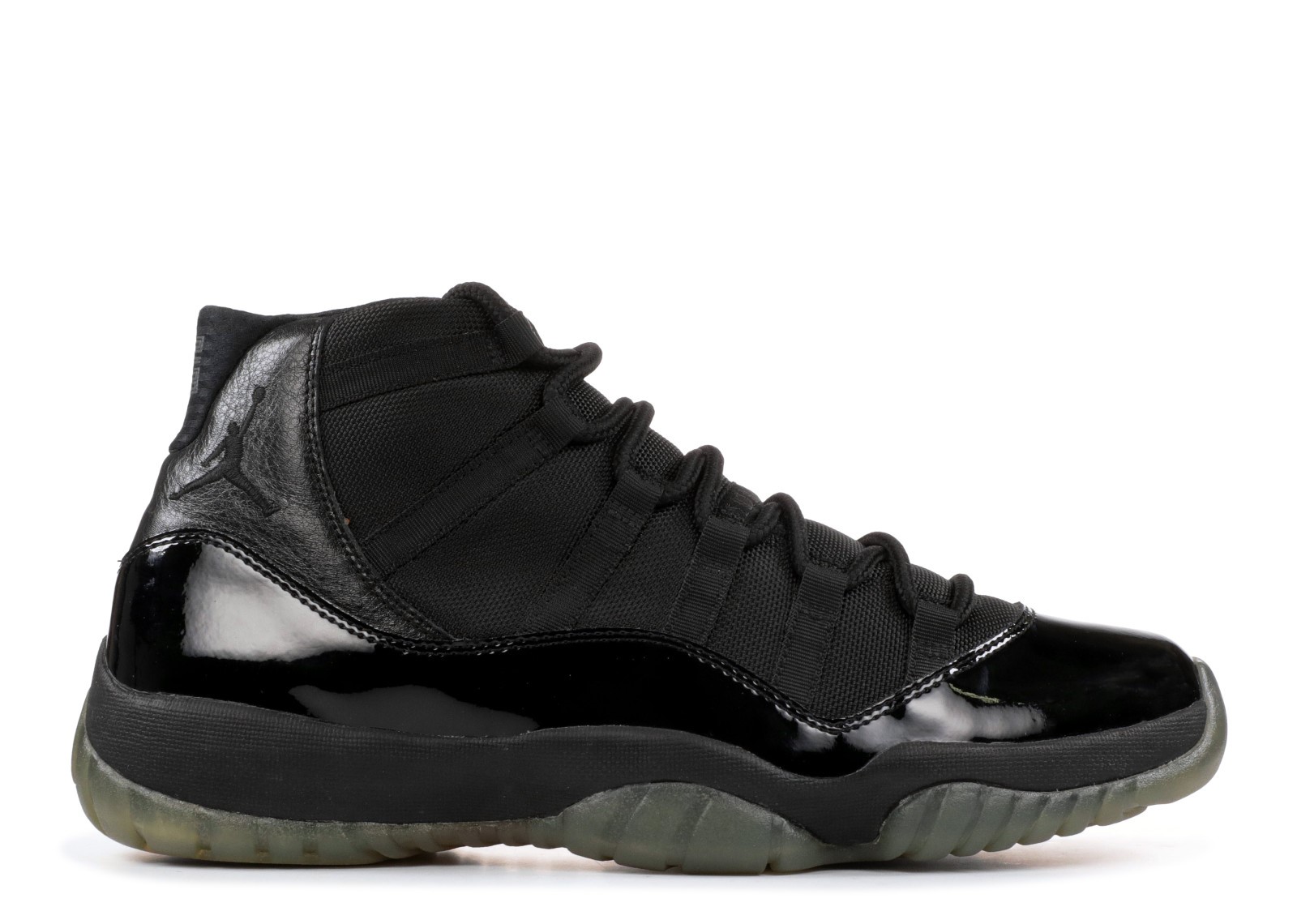 When the first images of the Air Jordan 11 came out in 2012, sneaker fans went crazy, some crazier with their money that one pair sold for $11,267 online. The Air Jordan 11 remains as one of the most popular models of the brand to date. 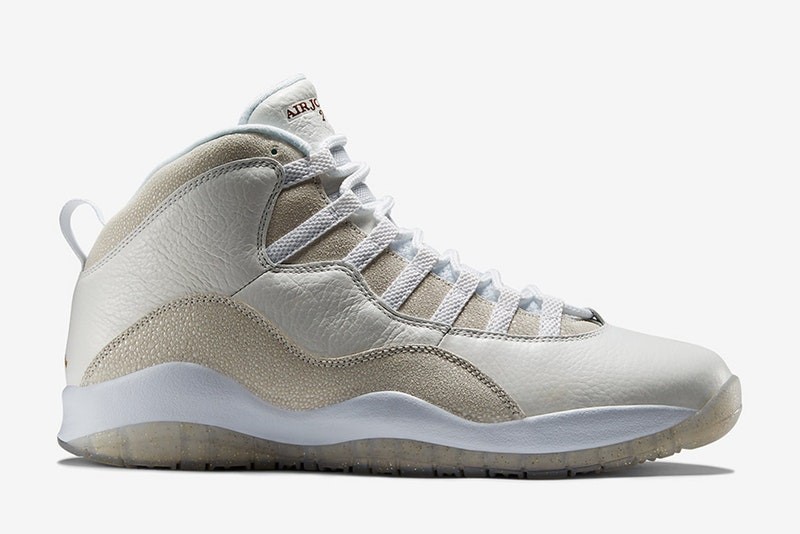 This is the ‘other’ pair from Drake Night 2014, the white one which fetched far less than its black counterpart. Still, $20,000 for a pair of kicks is pretty good. 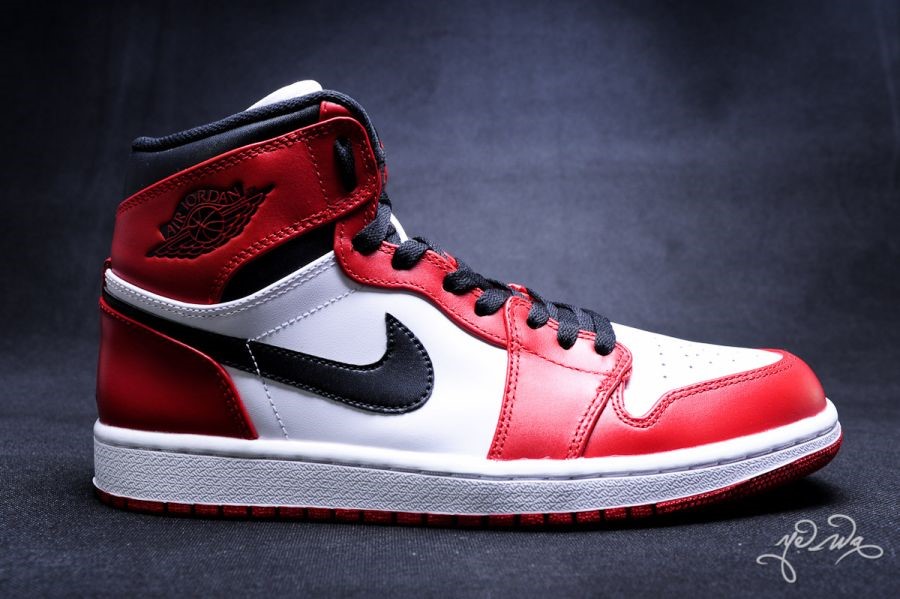 Michael Jordan is one of the few NBA players to be named as All-Star starter during his rookie year. Although his first All-Star game appearance didn’t turn out well due to the reported ‘freeze out’ on the rookie sensation but still, playing on the same court with the likes of Moses Malone, Larry Bird, Julius Erving and Isiah Thomas was a special occasion. Likewise, this autographed shoe is as precious as its memories. 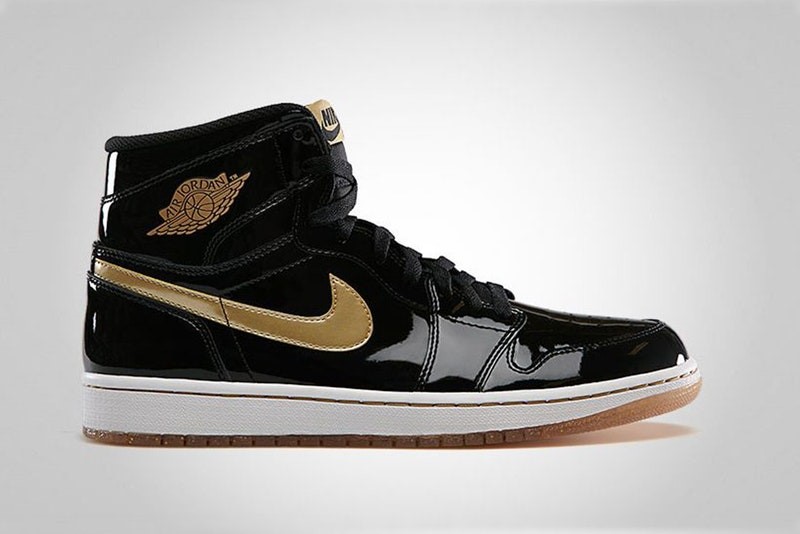 The black and metallic colorway of the first Air Jordan was a limited edition release that only had 12 pairs produced and exclusively distributed in Asia in 1985. Because of the popularity of the Air Jordan 1, this rare kicks sold as high as $25,000.00. 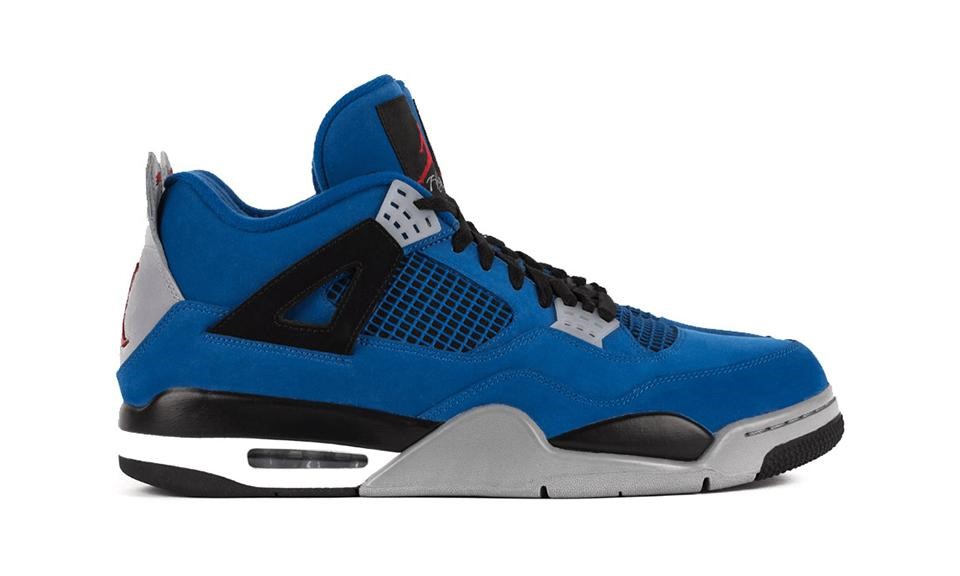 Only 10 pairs were made of the Air Jordan 4 Eminem x Carhartt kicks which didn’t go on sale but were auctioned at eBay with the proceeds going to the Michigan State University Music School’s drive to enroll local students. The auction raised a total of $227,000 which was really cool. 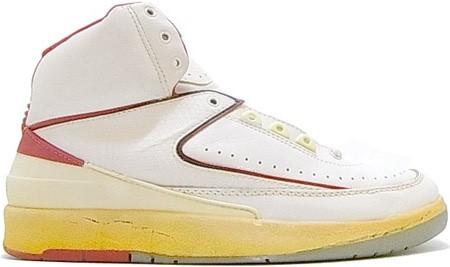 The Air Jordan 2 was not a popular model among basketball fans and sneaker collectors but still, this particular pair was sold at a remarkable $31,000 price tag. Based on the images posted, the shoe sold on ebay wasn’t in mint condition and in fact looked like it didn’t belong to a shoe collector. 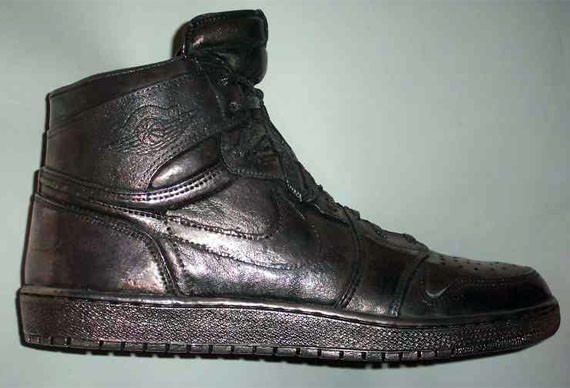 The Air Jordan Silver shoe is well, literally made of solid silver. The 10-pound version of the first model of signature shoe model was sold by a seller named ‘eaglesbyfly’ at ebay. It sold for $60,000 and was worth every penny.

The original Silver Shoe sneaker was given to M.J. by his wife on his 32nd birthday. She commissioned a jeweller to mold sterling silver on the shoe. The one sold at ebay was only one of ten Air Jordan Silver Shoes ever made. Other versions of the shoe are displayed at Jordan’s restaurant, the Chicago Science Museum and at a golf course Jordan used to play at. One was leased by MCI for a phone commercial. 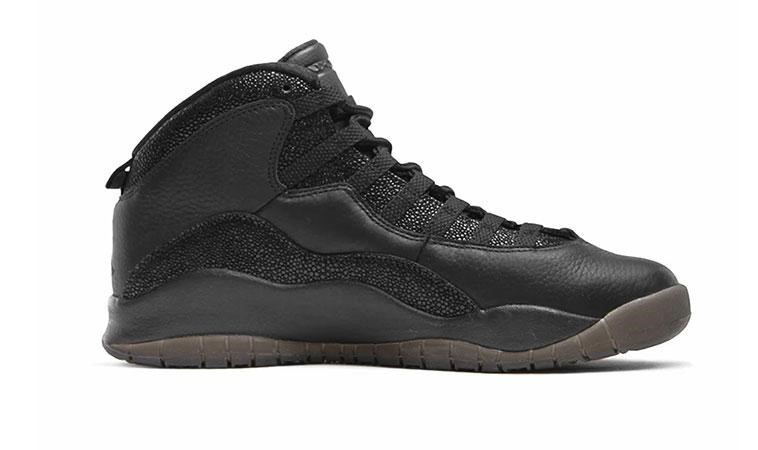 Canadian musician Drake gave away two pairs of unreleased Air Jordan 10 OVO samples from his collection during Drake Night at a Toronto Raptors game in 2014. The very limited edition sneakers were given to Drake and his inner circle for use at a concert tour and as a token to Drake for his partnership with the Jordan Brand.

The two fans were lucky because not only did they get very rare and unreleased sneakers, they got the ones that belonged to Drake himself. Naturally, these fans sold them on eBay. The white pair bid was up to $20,000 while the black one fetched $100,000 after 154 bids in one week. 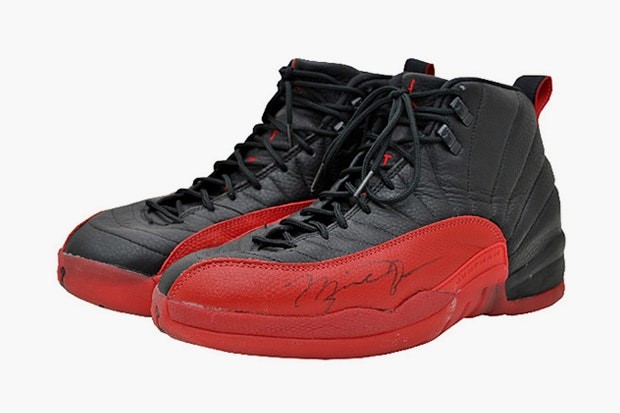 The ‘Flu Game’ is one of the most iconic games in Michael Jordan’s NBA career. Playing sick with flu-like symptoms, Jordan willed himself to 38 points in leading the Chicago Bulls to a pivotal Game 5 win in the 1997 NBA Finals.

After the game, MJ personally gave his kicks to Delta Center ballboy Preston Truman who later auctioned the shoes on eBay at a starting price of $5,000. 15 bids later, Michael Jordan’s game worn ‘Flu Game’ shoes were sold for a record $104,765. The price was outrageous but it wasn’t just the shoes that the buyer bought. It was a piece of history that he got.