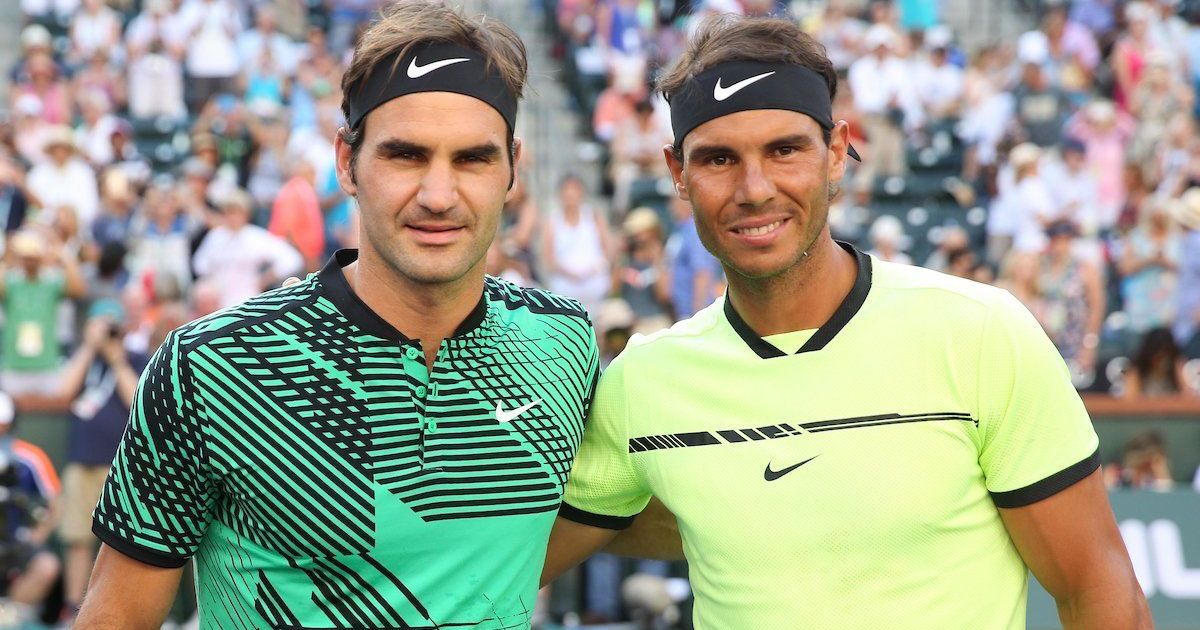 They call if Fedal but the five letter colloquial word may be too short and too simple to describe the greatest rivalry in the history of tennis.

Roger Federer and Rafael Nadal are two of the greatest tennis players of all-time. The rivalry began in 2004 when 34 ranked 17 year old Nadal upset then #1 ranked Federer in the 3rd round of the 2004 Miami Masters, beating the world number one in straight sets. Since then, the two have played 36 more matches against each other. Nadal leads Federer in this 13 year rivalry at 23-14 although Federer has won the last two matches, all in 2017. 23 of these 37 matches have been in tournament finals including an unprecedented nine Grand Slam finals and 11 Masters Series finals.

Either Federer or Nadal finished the year on top of the ATP rankings from 2004-2010 and the two would finish one and two ( either way ) for a record six calendar years from 2005-2010, including a record 211 consecutive weeks of sharing the top two spots from July 2005 to August 2009. They played in every French Open and Wimbledon Finals from 2006-2008 and their 2017 Australian Open Finals was the latest ( and unexpected ) of the Grand Slam duels.

Let’s take a look at the top matches in the rivalry between Rafael Nadal and Roger Federer ( or vice versa ) : 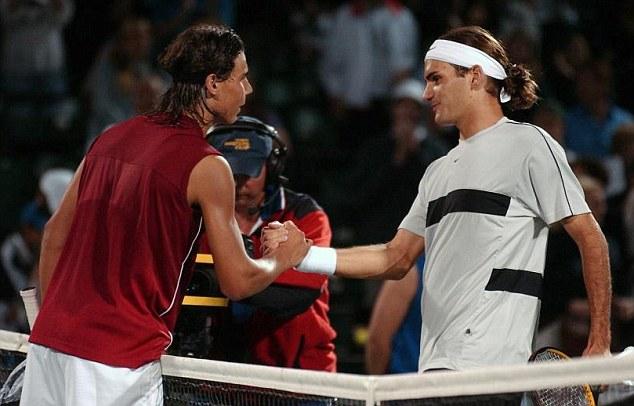 Every story has a beginning and for the Federer-Nadal rivalry, this was it.

World number 1 Roger Federer was feeling under the weather all-week long but still made it to the tournament’s finals with relative ease. Little did he know however that the 17 year old Spaniard he would face in the Finals would become his chief rival for the next 13 years.

34th ranked Rafael Nadal was the youngest player in the tournament. He was a hot prospect who had never won a tour-level title yet. And then he introduced himself to the world in a match that destiny written all over it. Federer was wearing a white shirt while Nadal sporter a sleeveless red top. The colors were meant to be. Roger Federer is known to be cool as ice while Rafael Nadal fiery as red. Fire and ice as many describe their contrasting yet complimenting styles. Two hands vs one hand, lefty against right handed, speed versus precision. What more could a rivalry need?

The only thing surprising that dat was how easily Nadal dispatched of Federer. He never faced a break point in the entire match and broke Federer in three of seven opportunities. Nadal wowed the crowd with his infinite energy and powerful strokes. Federer said he was never into the match as Nadal put on an impressive display of tennis.

After beating Federer though, Nadal lost to #22 Fernando Gonzalez in Round Four. Four months later, he won his first tournament in Poland. The following year, he broke out with 11 title wins including his first French Open title. 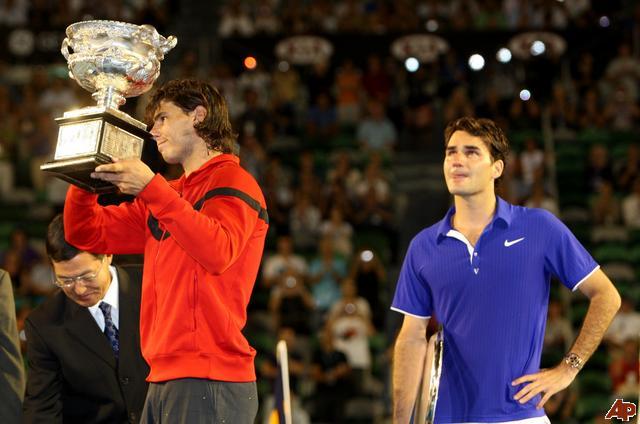 History was waiting for the winner of this match. For Roger Federer, it was an opportunity to win his 14th grand slam title and put him in a tie with the great Pete Sampras for the most grand slam singles titles won. For Rafael Nadal, it was the chance to become the first ever Spaniard to win the Australian Open in 104 years.

This time around, it appeared that the FedExpress had the advantage of a better and longer rest because he had a one day head start to recover from his semifinals victory. Nadal’s semifinal match against compatriot Fernando Verdasco ended in five hours and fourteen minutes, the longest match in Australian Open history at that time. But fatigue did not become a factor for Rafael Nadal even if the match ended at 12:14 am.

It turned out to be another epic duel between the rivals. Nadal raced to a 2-1 lead before Federer gutted out an inspired fourth set to tie the match at 2 sets even. Rafael Nadal wouldn’t be denied. He won the fifth set easily at 6-2 and became the first man since Goran Ivanisevic in 2001 to win a Grand Slam by going through five-setters in the semis and finals. Nadal also became the second youngest player to win a total of six grand slam championships. 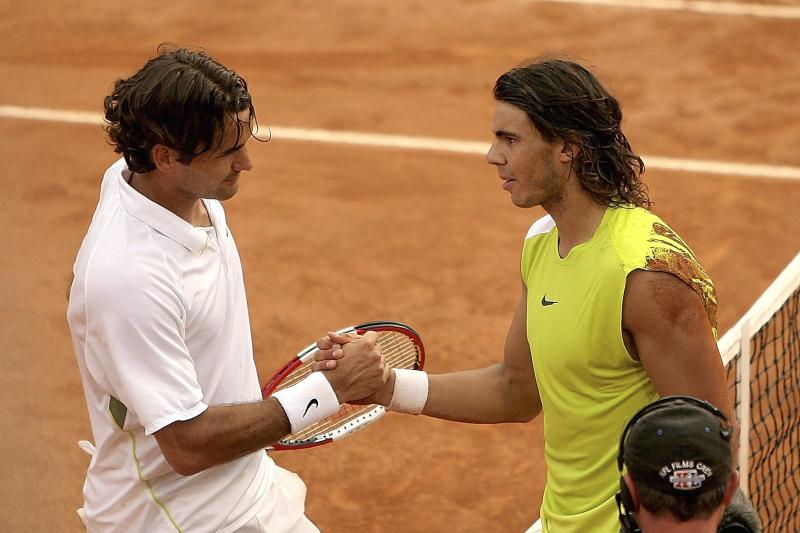 This was one one of tennis’ most competitive matches in tennis history and the best one in the rivalry up to that day. The New York Times even compared it to boxing’s Ali vs Frazier because it was a back and forth affair that lasted five hours and five minutes.

Federer repeatedly approached the net and forced the action. In the fifth set, he broke Nadal early and led 4-2. Federer had two match points with Nadal serving 15/40 and trailing 5-6. But Federer missed two forehands and Nadal forced deuce. And just as he seems to always do against the Swiss master, Nadal hit the big shots that mattered most. He rallied back to win the deciding set 7-6 (5).

With the victory, Nadal stretched his winning streak on clay to 53, tying the open era record set by Guillermo Vilas. Nadal also improved his Finals record to 16-2 to earn the highest winning percentage in Open Title History. Federer would end up having an equally successful 2016 after finishing with a 39-3 record. All of his three losses came against Rafael Nadal. 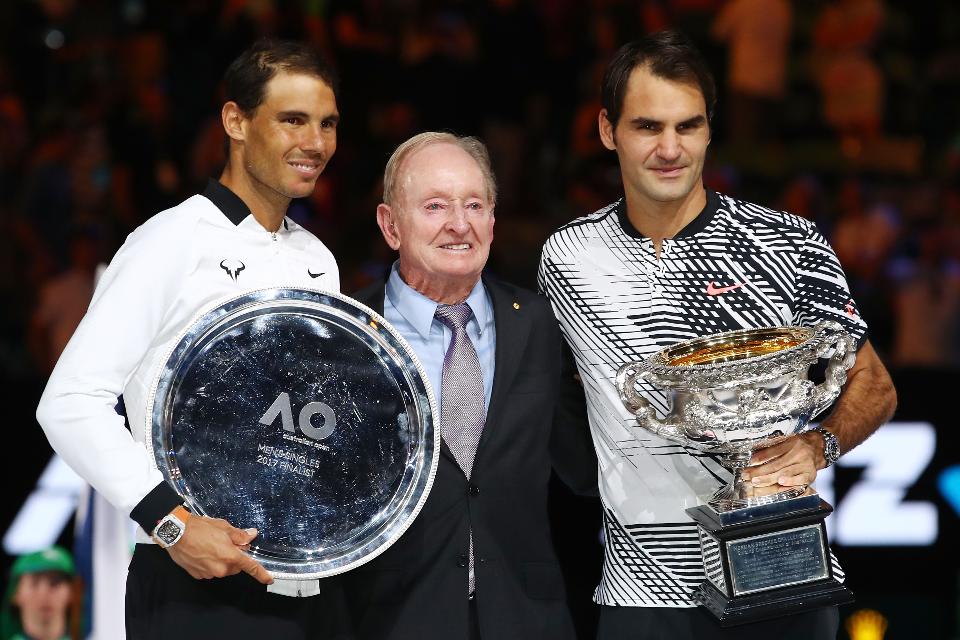 This one was pretty special because at this stage of their careers, nobody expected them to square off in another Grand Slam Finals. Their faces remained the same but the receding hairlines were proof that Father Time was fast catching up with the rival-friends. But the ‘seniors’ were not to be denied one more dance.

It had been three years since Rafael Nadal hoisted the Roland Garros trophy in 2014 and five years since Federer’s last triumph at Wimbledon in 2012. Federer was a surprise finalist at Melbourne because he took the second half of 2016 off following a recurring knee injury. Nadal too, missed the final five weeks of 2016 to rest his left wrist. But it was perhaps destiny who brought them back together in one of the most watched tennis matches of all-time.

Federer started hot but Nadal’s spirited comeback evened the match at 2-2. Rafa broke to start the deciding set and it seemed that this would become one of his five set masterpieces. Federer though had some tricks left underneath his sleeve. Down 1-3, he won five straight games including two service breaks to win the fifth set 6-3 and claim his fifth Australian Open title.

The Swiss ace became the oldest Grand Slam champion ( 35 years and 174 days ) since 35 year old Ken Rosewall won three majors from 1970 and 1971. With his 18th Grand Slam victory, Federer further distanced himself from Pete Sampras and Rafael Nadal who each have won 14 Grand Slams. 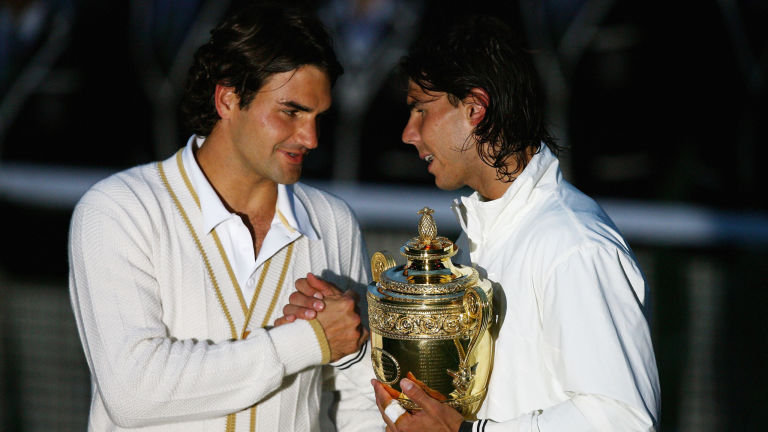 Many say this was the best match in the history of tennis. It still stands as the longest Finals match in Wimbledon history at four hours and 48 minutes. For Rafael Nadal and Roger Federer, it was just one of those five-set thrillers.

Federer was aiming for his sixth straight Wimbledon championship and 13th Grand Slam title. Rafael Nadal was looking to become the first man to win the French Open-Wimbledon double since Bjon Borg in 1980.

Nadal started out strong by winning the first two sets and silencing the pro-Federer crowd. But just when everyone thought this was going to be a rout, Federer roared back and won the third set after a rain delay. After two pulsating tiebreaks and another rain delay, it was Nadal who became champion for the first time in the tournament he had always wanted to win badly.

The match was the focus of a book written by Sports Illustrated’s tennis writer Jon Wertheim entitled “Strokes of Genius: Federer, Nadal, and the Greatest Match Ever Played”.