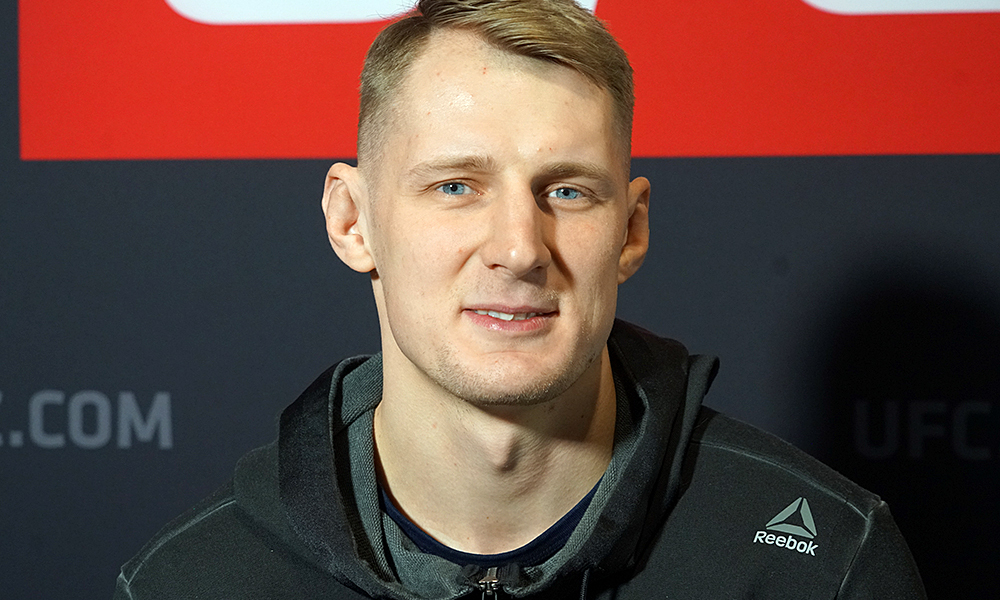 Alexander Volkov grew up watching the great Fedor Emelianenko rule MMA for a good number of years. The man known as the Last Emperor is widely recognized as the best heavyweight fighter of all-time.

But with Emelianenko on the decline and almost surely a candidate for retirement ( even if he claims otherwise ), Volkov can become the new torch bearer for his mother Russia, who has been known to produce some of the world’s best heavyweight fighters in MMA.

The first step to that journey was UFC Fight Night 115 in Rotterdam, the Netherlands. Volkov was slated to face fellow Top 10 heavyweight and hometown boy Stefan Struve in the main event. It was Volkov’s toughest test so far in his young UFC career. He passed it with flying colors.

After getting bloodied with a massive cut from a jumping knee from Struve in Round 1, Volkov had to overcome several eye poke fouls from his opponent in Round 2. Still, the tough as nails Russian managed to outstrike Struve and knock out the hometown fighter in the third round of a scheduled five rounder.

Volkov outstruck Struve 144-41 in total strikes, landing the most number of strikes ever on the Dutch Skyscraper in his 19 fight UFC career. The 6-7 Volkov had to adjust with fighting against a much taller seven foot opponent. But once he found his striking range, he landed with the authority and accuracy that champions are made of.

The win was Volkov’s third straight in as many fights in the UFC. In his UFC debut at UFC Fight Night 99, he barely got past Timothy Johnson with a split decision victory. Then ‘Drago’ dominated Big Country Roy Nelson in three rounds at UFC on Fox 24 last April. But his victory against Stefan Struve, who was also on a two fight win streak coming to Rotterdam, was undoubtedly his biggest win in the UFC.

After fighting exclusively in Russia and Lithuania in his first 19 bouts, Volkov signed with Bellator MMA in 2012 and quickly ran the table by winning the promotion’s Bellator Season 7 Heavyweight Tournament to become its inaugural heavyweight champion. Volkov would surrender the title in his first title defense after getting knocked out by fellow Russian Vitaly Minakov.

Volkov bounced back by winning Bellator’s Season 10 Heavyweight Tournament in 2014 but after suffering back to back losses to Tony Johnson and Cheick Kongo in 2015, he was released by Bellator and found himself returning to his roots at the M-1 Global Promotion in Russia. The resilient Volkov won the M-1 Global Heavyweight title by submitting Denis Smoldarev at M-1 Challenge 64. After a successful defense at M-1 Challenge 68 four months later, he found himself signing with the UFC. Now Volkov is on the verge of breaking out in the world’s top MMA promotion.

After the win, Volkov was more interested with where his next fight would be, not who he would like to fight next. Said Volkov:

“Actually right now I’m not thinking about who to fight, but I’d rather think about where to fight. Today, five Russian fighters won. I headlined a tournament. It would be great if UFC would be able to bring UFC to Russia, I will be happy and honored to headline this tournament.”

The UFC has been flirting with the idea of bringing the show to Russia as part of its international expansion. Last year, UFC President Dana White talked about Russian lightweight top contender Khabib Nurmagomedov headlining an event in Russia. With Alexander Volkov slowly making a name for himself in the promotion, that Russian dream looks more closer to reality than ever.

Getting A Title Shot

For Volkov though, everything does not culminate with getting to headline an event in Russia. Volkov is currently the promotion’s 7th ranked heavyweight and with the dearth of talent at his weight class, he could be in line to face a Top 5 guy in his next fight. Another victory may already mean a title shot.

In June, Volkov was asked by Fighters Only magazine about how close he felt to a title shot. The Russian replied:

“I think I am really close to it. Any fight now in the heavyweight division can be called a contender fight. I feel I can beat anyone in top ten now.”

Now that he’s beaten Stefan Struve, we can say that Alexander Volkov has arrived and ready to take on the big boys. At age 28, he’s already a decorated veteran of 35 MMA fights. He’s been through his ups and downs at the Bellator Promotion. Now he finds his stock rising in a much bigger stage.

These are exciting times for the UFC’s heavyweight division. In the past, a title fight meant watching either Junior Dos Santos or Cain Velasquez ( or both ) inside the Octagon. With the likes of Marcin Tybura, Aleksei Oleinik, Derrick Lewis, Francis Ngannou and Volkov now in the picture, the Heavyweight division is expanding.
As for Volkov, the road to success is also a road to greatness. Not just to become UFC champion but to become a legend in his country. The standard in Russia is Fedor Emelianenko, arguably one of the best heavyweights the sport has ever seen. Volkov grew up idolizing Fedor. Now he has a chance to be like him or even be better. Whether he surpasses his idol, Emelianenko, remains to be seen.

“To be better than the legend, I have to become a legend myself. Time will tell. But I am young and I am at the beginning of my long journey. I am improving and there are thousands of things I have to learn as a fighter. The possibilities are endless. I just want to train hard and fight with all my heart and soul to be the best in the best league.”

Alexander Volkov has the size and skill to become one of the best heavyweights in the business. Only time will tell if he gets it all together and win it all. And perhaps become the Next Emperor.