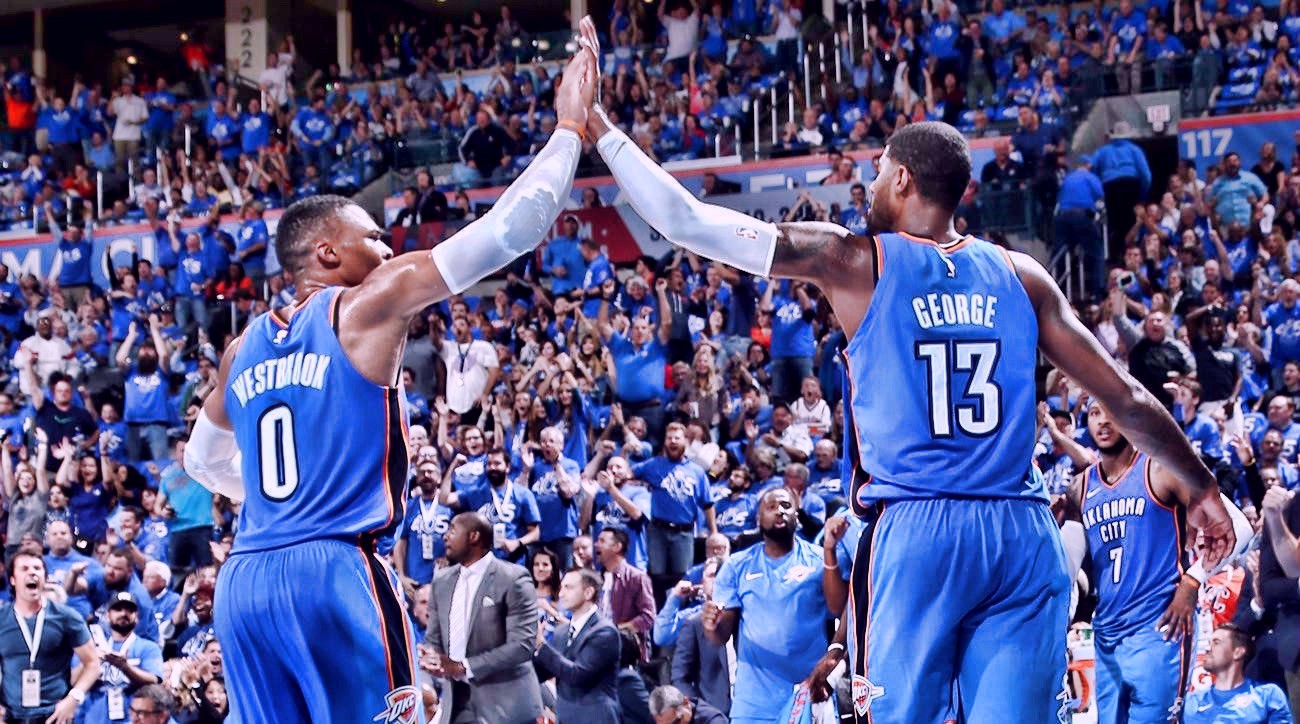 The Thunder Are Starting To Roll

The Oklahoma City Thunder struggled to start the 2017-18 season but with a team that was assembled only last summer, they were preaching patience and perseverance while asking their fateful to give them time to ‘figure it out’.

There were was no time table announced but given that Paul George is an unrestricted free agent at the end of the season, there was a silent ultimatum. At first it was thought that they would make it work after a month. That didn’t happen. Then the unofficial deadline was moved back, perhaps by December. As Russell Westbrook told the OKC crowd “Merry Christmas” after their Christmas Day win over the Houston Rockets, we knew they had it figured out.

Two nights later, the Thunder crushed a Toronto Raptors team that had won seven of nine games and had silently crept to 2nd place in the Eastern Conference. The Thunder made easy work of the Raptors, beating them handily 124-107. With the victory, the Thunder have won six games in a row and 12 of their last 15 games. They have now moved to 5th place in the Western Conference and are a couple of games behind Minnesota for home court advantage in the first round of the playoffs. 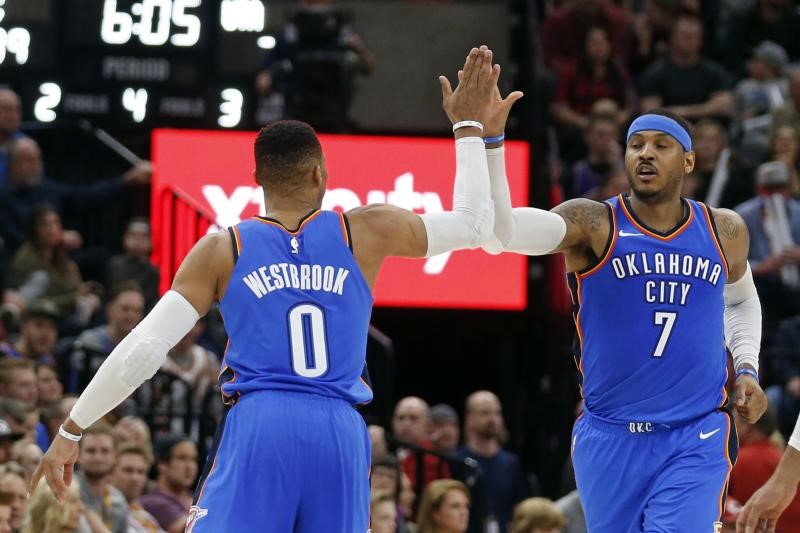 The Thunder lost their first five games decided by five points or fewer and went on to have a 1-7 record in such games during the month of November. That has completely turned around in the last fifteen games with Oklahoma City going 9-1 in clutch games, the best record in the entire NBA.

Following their Christmas Day win over the league leading Houston Rockets, Paul George talked about himself, Melo and Russ finally playing on the same page:

"There's no confusion," George said of the Thunder's crunchtime improvement. "We're just playing. We trust one another. We're on the same page with one another. We just figured it out, how to close, how to play well, how to tighten up. We're just comfortable, I think. That's what took a little time, is the comfort level."

It took the month of November to adjust. Then this month, Oklahoma has literally roared like thunder and are five games above the .500 mark after a dismal 8-12 start to their season. 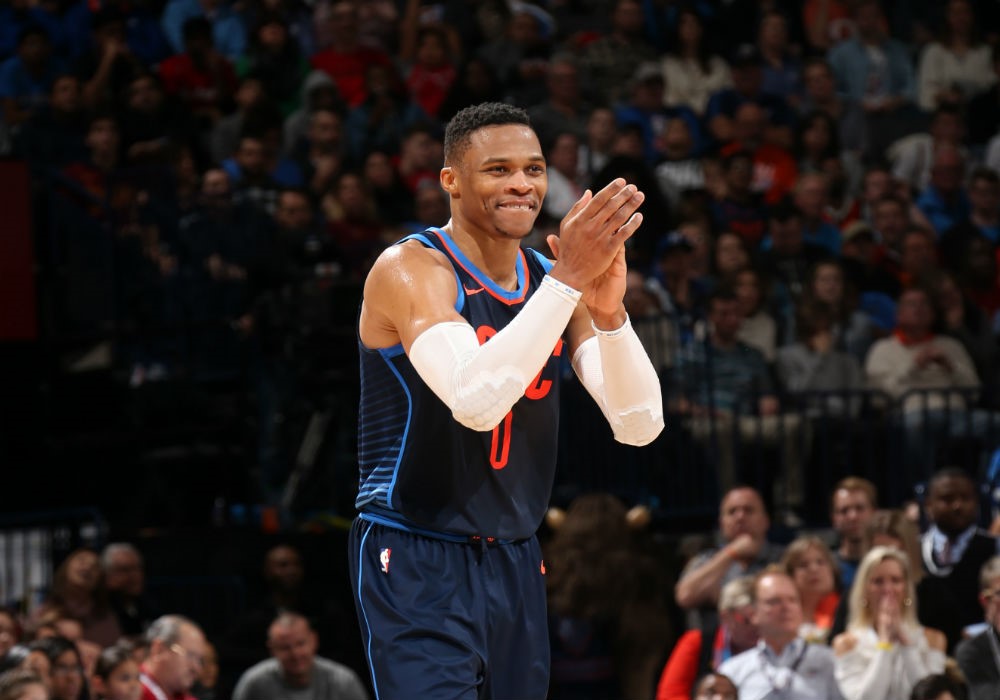 One of the main reasons for that is shot selection. For the month of November, only 56.6% of the Thunder’s field goal attempts in the clutch came from two point range with a high 43.4% of their shots taken from beyond the three point arc. But in the last 15 games, the ratio has gone down to 69.9% to 30.1% on two pointers to three pointers, respectively. As a result, the Thunder’s offensive rating in the clutch ballooned to 103.6 from 88.7 over the same period.

Another reason is Russell Westbrook taking the big shots for the Thunder. Before the season began, one of the hypothetical questions asked about the team is who is going to take that last shot when the games are on the line? With a three-headed monster, that was a dilemma for the Thunder early in the season as there was a close gap between the clutch field goal attempts of the OK3. In the last fifteen games however, it’s been clear who they want to have that ball with the game on the line:

With Westbrook taking matters into his own hands, the 2017 NBA MVP has averaged 4.5 points per game in the clutch during the last 15 games. That’s 60% more than the 2.8 clutch points per game he scored during the month of November. And it’s not just in the clutch that Westbrook has taken charge. He’s practically reverted back to the old Russell Westbrook, the one who single handedly carried the Thunder to the playoffs last season.

Deciding To Take Over 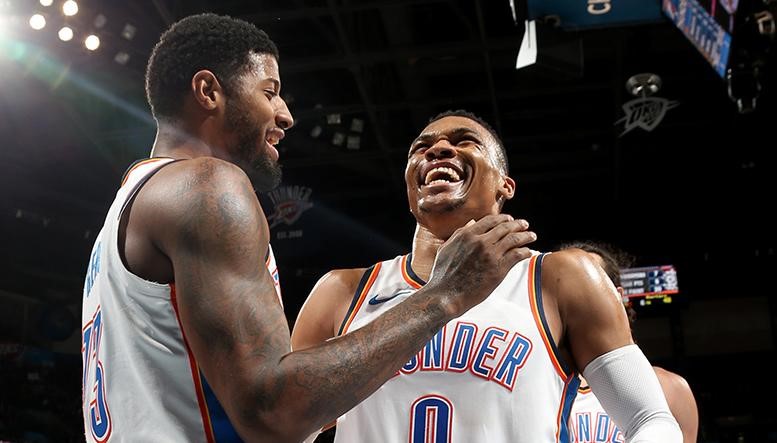 When the Thunder assembled this all-star cast during summer, many wondered how Westbrook, George and Anthony would jell as a group. As the leader of the group, it was Westbrook who decided to sacrifice his game ( and numbers ) in order to accommodate the newcomers. That didn’t work as the Thunder looked confused. But with Westbrook back to his old ways, it looks as if they have figured it out.

"I think the fact that Russ is just playing -- not trying to defer to anybody, to any one of us -- just playing his game and letting us play off him ... I think he's much more effective by doing that rather than deferring to myself or Paul," Anthony said. "We know what we bring to the game. We understand it. We accept it. And by that, he's able to just play his game, relax and do what he does best. We need that. We need that Russ out there. Not the one who defers to us. Let us figure it out."

Westbrook’s numbers have steadily gone up with his usage ‘going back to normal’. In the month of November, Westbrook tried to accommodate George and Anthony into the offense, giving his fellow All-Star an equal slice of the pie. But when that didn’t work, Westbrook just decided to take over and put the ball in his own hands:

We highlighted the last six games since the Thunder are currently on a six game winning streak. Of course, the 15 game window also shows how Westbrook has taken charge during the period where the Thunder have gone 12-3. In November, OKC had a record of 4-9.

With more plays dedicated to Russ when he is on the court, his shot attempts have also increased. Along with that, his field goal percentage and scoring average have also gone up during this fifteen game stretch.

Last season, Westbrook averaged 31.6 points per game on 24.0 field goal attempts. He shot the ball at 42.5% from the field and had a league leading usage of 41.7%. So as Westbrook’s current numbers have gone up and have neared 2017 NBA MVP numbers, the Thunder have been more successful. 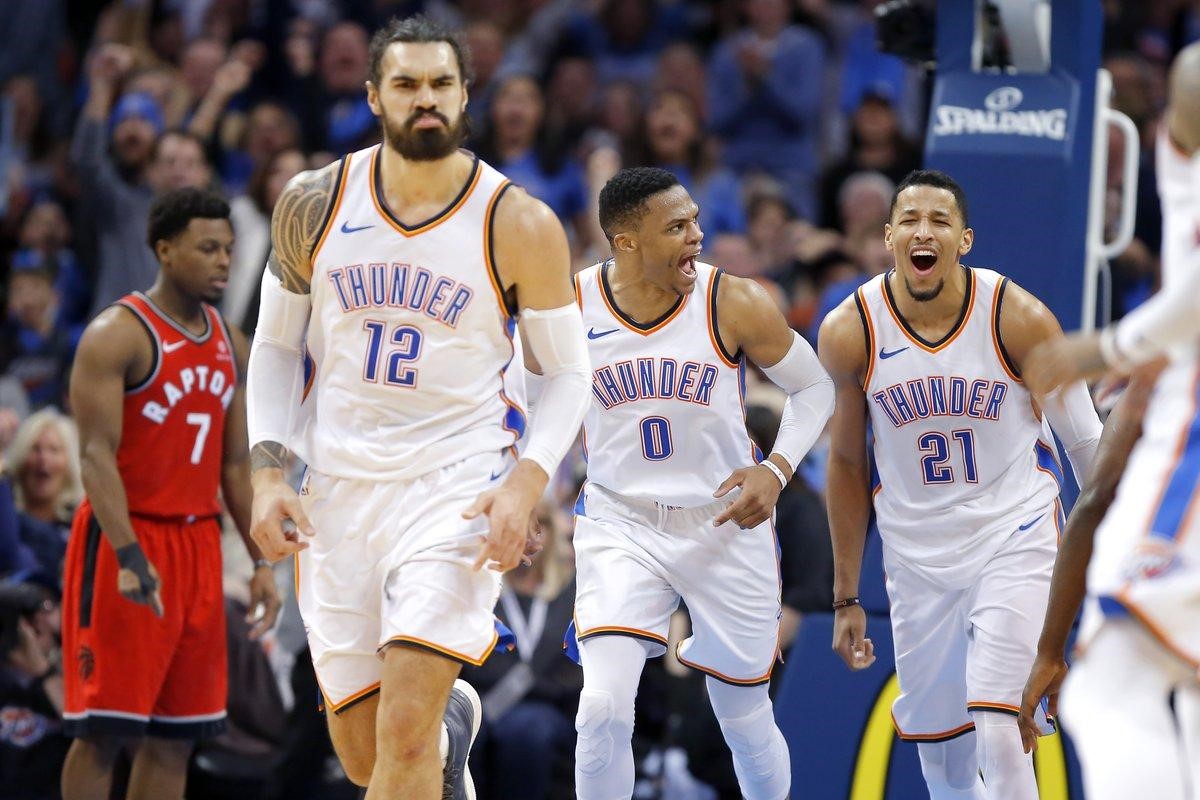 As Westbrook has also returned to the Russ of Old, the Big Three have never played better as a trio. Against the Raptors on Wednesday, the trio combined for a total of 81 points, their highest since playing together. Not only that, Westbrook and George scored at least 30 points each, marking the first time that two of the three all-stars have scored at least 30 points in a single game.

"I think they're getting more and more comfortable with each other, how we're trying to play, things we're trying to do, where their shots are coming from," Donovan said. "Hopefully there's less thinking and more playing for them."

There is no more thinking for this Thunder team. It is Westbrook’s team and the ball has to be in his hands. George has played excellently off him, both on offense and defense. Carmelo Anthony? He’s been relegated to an auxiliary role, yet still effective in what he does best. The result has been more clarity and a lot more wins. If the Thunder continue to evolve as a team, then they can be very dangerous, especially during the playoffs.