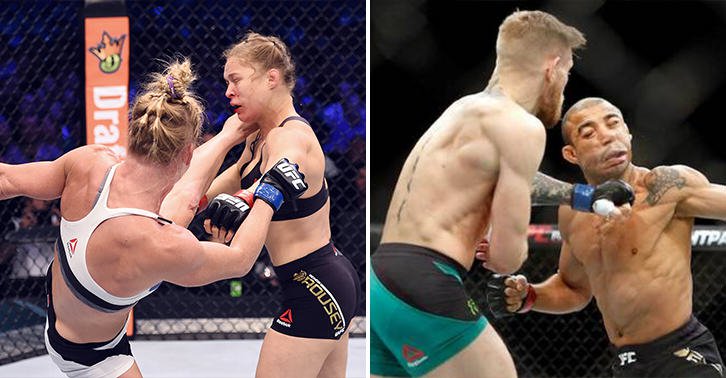 Knockouts are what make the fight sport exciting and worth watching. In the sport of MMA, we often see two fighters grappling with each other for long periods of time. We see fighters grabbing each other on the mat, trying to get those submission wins. Those are the sequences that only the hardcore MMA fans understand and enjoy. For the average fan, grappling and the ground game make MMA somewhat boring. However, everybody- fight fan or not, agrees that knockouts are what makes the sport exciting.

Here are the Top 10 best knockouts in MMA history: 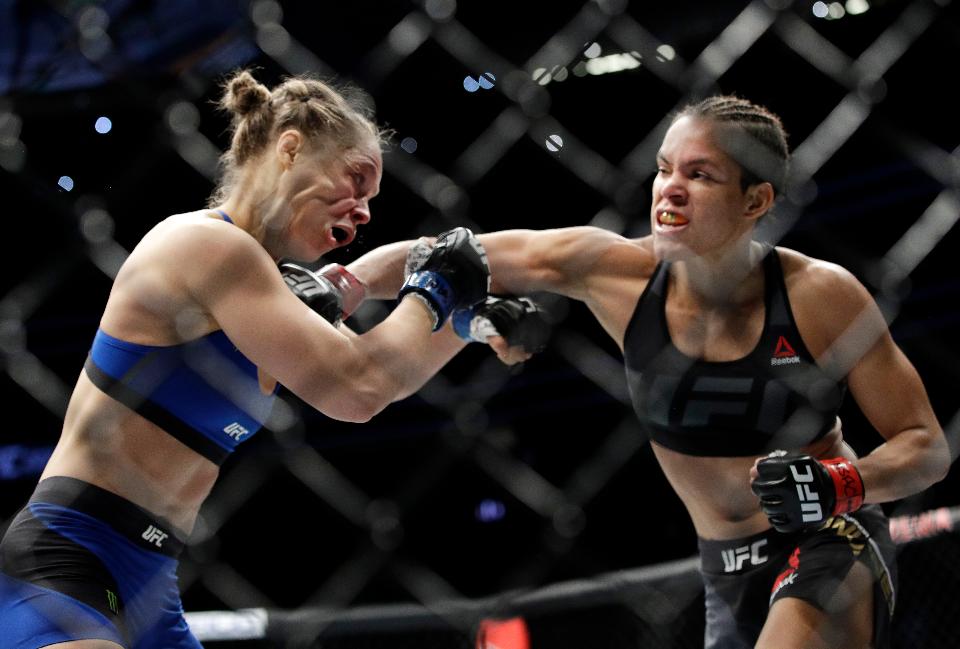 It was Ronda Rousey’s comeback fight. Formerly the most dominant champion in UFC history regardless of gender, Ronda Rousey spent over a year in the sidelines after her shocking loss to Holly Holm. There were many speculations regarding her return but Dana White saved her much awaited comeback for the UFC’s year ender event. Unfortunately, it wasn’t just a year ender. It was a career ender.

UFC women’s bantamweight champion Amanda Nunes destroyed Ronda Rousey in just 48 seconds. Displaying superior striking and punching power, Nunes made Ronda look like an amateur in a stand-up battle. Right from the onset, Nunes landed easily on Rousey and picked her apart in less than one minute.

The event was labeled as ‘She’s back’ in reference to Rousey’s Octagon return. Instead, Nunes sent Ronda back to the sidelines with one of the best knockouts in MMA history. With a second consecutive brutal knockout loss, Ronda Rousey’s MMA career appears to be over. 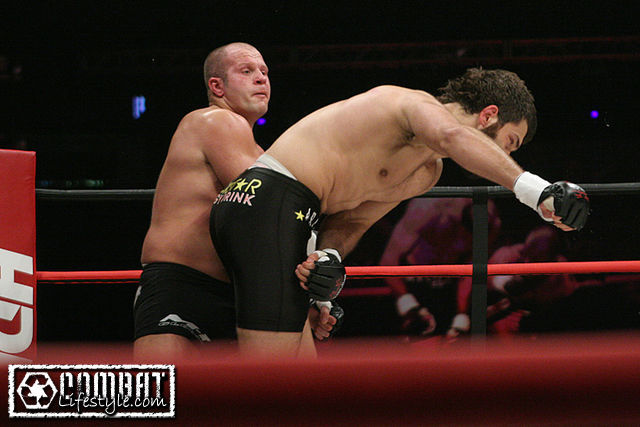 Fedor Emelianenko is considered by many as the greatest heavyweight of all-time and by some as the greatest mixed martial artist of all-time. The Last Emperor is the longest reigning Lineal champion and heavyweight champion in MMA history. After winning the inaugural WAMMA title, he defended the belt at Affliction: Day of Reckoning against one of the best during that period in Andrei Arlovski .

Arlovski was a top 5 heavyweight coming into the fight. After his back to back losses to TIm Sylvia where he lost and failed to reclaim the UFC heavyweight title, Arlovski was on a winning streak that saw him win five in a row, including four by stoppage.

Arlovski had early success, landing big punches and kicks on Emelianenko. But while Emelianenko was backing up at the ropes, Arlovski attempted a flying knee which was telegraphed by Fedor. The Last Emperor countered with an overhand right which led to the brutal knockout of Arlovski at the 3:14 mark of round one. The knockout was voted as Sherdog’s Knockout of the Year in 2009. 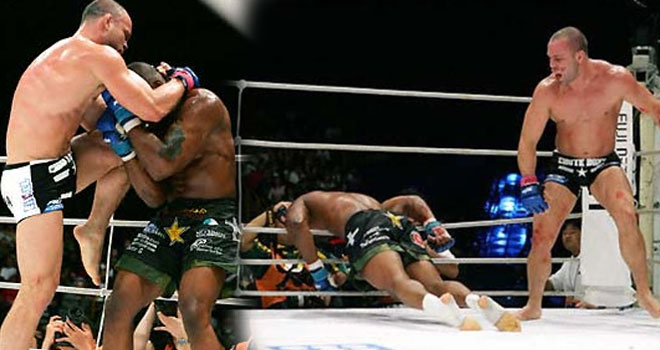 Wanderlei Silva was a legend in the Japanese circuits. Known as the Axe Murderer, Silva own the record for most wins, knockouts, title defenses and longer winning streak in PRIDE history. Three fights earlier, Silva knocked out Quinton ‘Rampage’ Jackson in round one to win the PRIDE 2003 Middleweight Grand Prix finals.

After the defeat to Silva, Jackson would win back to back fights by stoppage and would set up a rematch with the Axe Murderer for the Pride Middleweight title at Pride 28: High Octane. Jackson would start strong, knocking down Silva near the end of round one and mounting him as the bell rang. In the second round, Silva hurt Jackson with an overhand right and followed it up with several knees that knocked Jackson out, face first to the ropes.

The manner by which Silva knocked out Rampage was as impressive as how Jackson hit the canvass. And yes, Wanderlei Silva also knocked Rampage Jackson out with a knee during their first bout. Same ending, just more brutal this time. 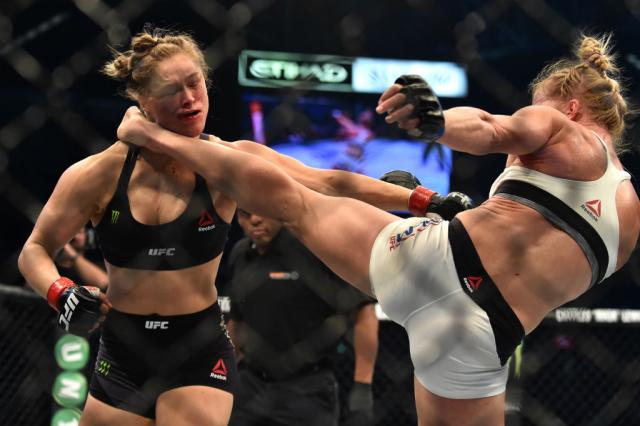 Look, we don’t hate Ronda Rousey. It just so happened that her two losses were both by brutal knockout.

Holly Holm was then an undefeated mixed martial artist who had a 2-0 record in the UFC. Holly was a former kickboxer and world champion boxer. As boxing champion, Holm was a multiple time world champion who defended her belt 18 times in three weight classes. Going into UFC 193, she was expected to be just another line on Ronda Rousey’s resume.

Ronda Rousey was a beast during that period. The former Olympic medalist in Judo was undefeated in 12 bouts and was making her 7th straight title defense. Rousey had won all of her bouts by stoppage with only Miesha Tate going past round one against Rousey. Her first eight wins were by her signature armbar finish. 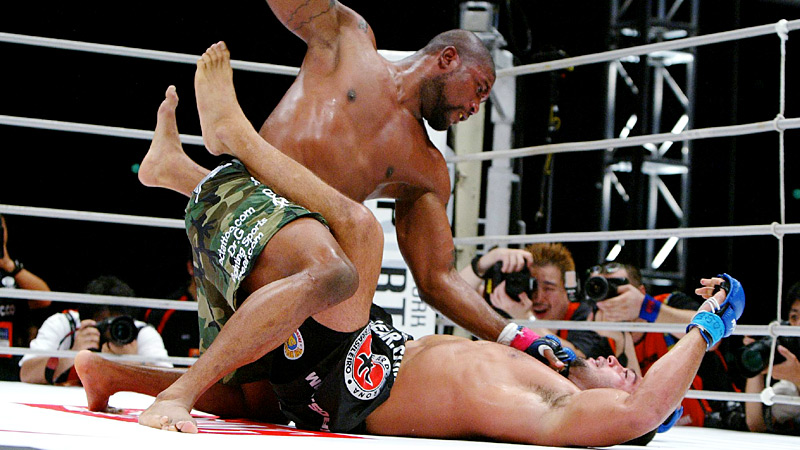 The Rampage Powerbomb that ended this fight remains one of the greatest MMA highlights of all-time.

Ricardo Arona was one the great submission artists during his time. Arona was three time ADCC World Champion, never losing a point in submission wrestling match. After becoming RINGS champion, Arona was noticed and signed by PRIDE. He won his first three bouts before running into Jackson’s rampage.

After Arona hurt Rampage with an upkick, he secured a triangle choke and appeared headed for another submission win. But Rampage suddenly lifted him up and countered with an explosive and sensational powerbomb that knocked Arona out, forcing the referee to stop the bout. The win led to a rematch and title shot against Wanderlei Silva but we know how that ended ( #8 above ). 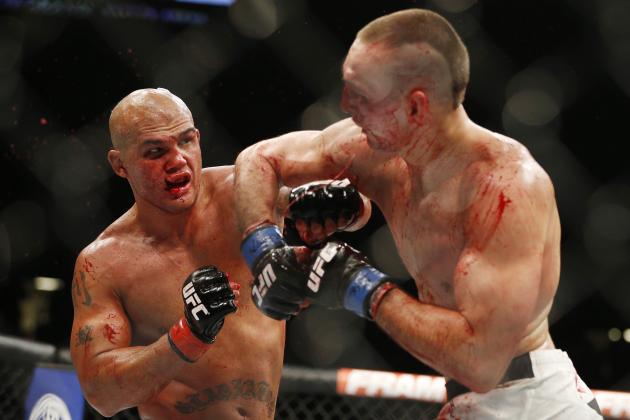 Every fight involving Robbie Lawler is a war. He’s not known as Ruthless for nothing. He loves to slug it out with anybody put in front of him. So whether he wins the fight or loses it, it’s always a knockout waiting to happen.

Rory MacDonald was one of the UFC’s up and coming welterweight contenders. The GSP protege was on the rise and challenged Lawler for the welterweight title at UFC 189. The first round was surprisingly quiet as both men appeared to be tentative and trying to feel each other out. The next four round would be hell. Both men would go back and forth, bloodied and bruised. In the fifth, Lawler broke MacDonald’s nose and forced him to quit with blood dripping all over his nose.

It wasn’t a one punch KO but the accumulation of damage and brutality of the ending earned it Sherdog’s Fight of the Year honors in 2015. It was also hailed by experts as the best welterweight title bout ever. 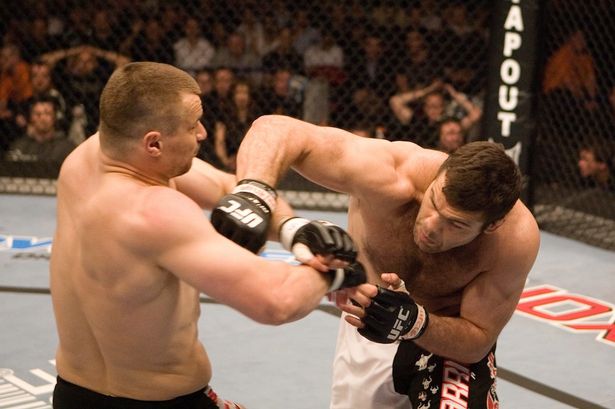 Gabriel Gonzaga’s bout against Mirko Filipovic at UFC 70 was a heavyweight title eliminator, with the winner moving on to face then UFC heavyweight champion Randy Couture.

Gonzaga was coming three consecutive stoppage victories so he had some momentum. But this wasn’t any opponent. This was Cro Cop, who won the 2006 Pride open weight Grand Prix Tournament. He was known for his head kicks which were famous for the phrase: ‘right leg hospital, left leg cemetery’. It was supposed to be a tune-up fight for Cro-Cop, instead the unheralded Gonzaga came up with one of the sport’s greatest highlight reel knockouts of all-time.

Gonzaga landed the perfect head kick with nine seconds left in the first round. The kick immediately floored Filipovic and he has never been the same ever since. Gonzaga meanwhile, went on to face Couture but lost. Even then, the way he used Cro Cop’s main weapon against him launched Gonzaga to fame and MMA immortality. 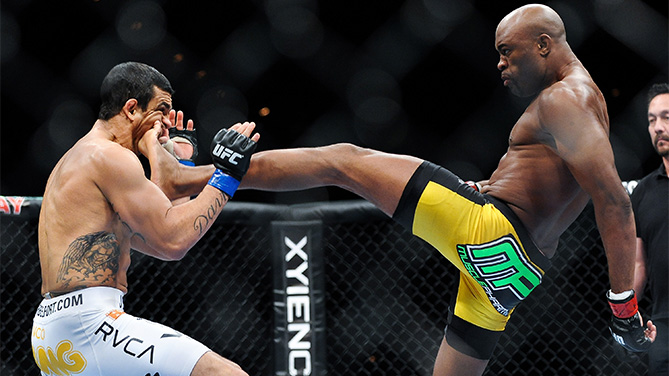 Okay, so we’ve seen knockouts from punches, headkicks, body slams and knees. Now this one is one of the most famous knockouts in UFC history. And it came as a result of a front kick.

Anderson Silva is considered as the greatest middleweight of all-time and even the greatest mixed martial artist of all-time. The Spider had a run of 16 straight wins including 10 consecutive title defenses in a span of 2,457 days. This fight was one during that incredible run.

Fellow Brazilian Vitor Belfort is one of the sport’s most explosive strikers and destructive punchers. A former winner of the UFC 12 Tournament and a former UFC light heavyweight champion, the Phenom had never been knocked out in 28 fights prior to UFC 126. After a feeling out period of two and a half minutes, the two began to trade strikes. That was when Silva surprised Belfort with a front kick that landed flush on Belfort’s jaw. Belfort immediately dropped and Silva finished him off with a barrage of punches that gave him ESPN’s 2004 Knockout of the Year. 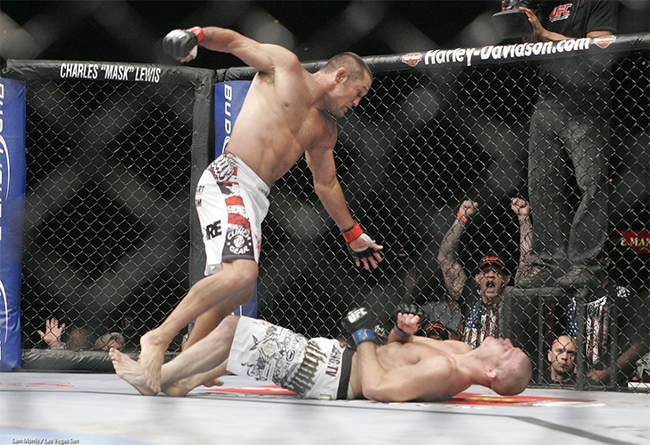 Dan Henderson has plenty of knockouts worthy of a spot in this list but his UFC 100 stoppage of Michael Bisping stands out not only because it has been replayed millions of times but because Henderson’s finish later became the silhouette for his personal logo.

They call it the H-Bomb, Dan Henderson’s most famous right hand. He can be down in any fight and still have a chance to win because of his freak one punch knockout power. And Michael Bisping realized this the hard way. A coaching gig against each other at the Ultimate Fighter 9 marinated the fight. UFC 100 was a monumental event and Hendo shone.

In the second round, while Bisping was circling to Henderson’s right, Hendo landed his H-bomb with an overhand right to the jaw. The Count went out and when he was down, Henderson landed what Bisping calls until now an overkill-Henderson’s logo. Hendo would go on to title contention and although he never won the UFC middleweight title in his storied career, his UFC 100 knockout of Michael Bisping is one of the UFC’s greatest memories. 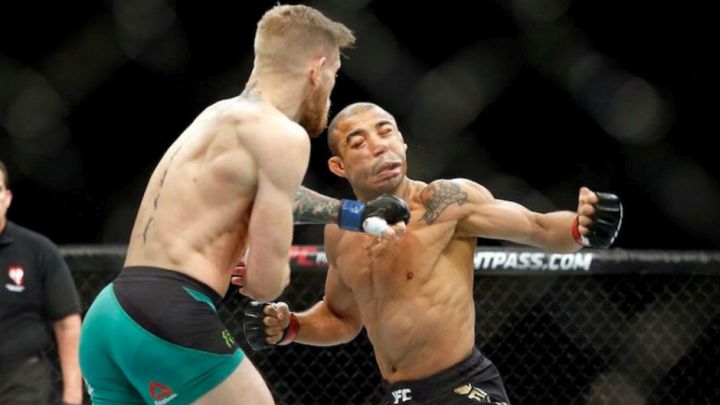 The shot that made a legend and a punch that started the Notorious reign.

Say what you want to say about Conor McGregor but the Irishman is one hell of a son of a gun. He talks more trash than Michael Bisping but has always backed up his mouth with his fists. McGregor’s always said that nobody can take his right hand shot. Nobody.

When Conor McGregor finally stepped inside the Octagon with Jose Aldo for the undisputed UFC featherweight title at UFC 194, it was a fight he waited for all his life. McGregor didn’t waste any time. He landed a perfectly timed left hand right off the gates and then boom. Jose Aldo was gone in seven seconds. Yes, that was all it took for McGregor to win his first title. Aldo would say it was a lucky punch. But whether it was the luck of the Irish or not, McGregor’s left hand shot is one of the most devastating weapons in the sport.

McGregor would later go on to win the lightweight title by knocking out Eddie Alvarez and become the first fighter to be a two division champion concurrently. McGregor has never defended either belt and he is now set to face undefeated boxer Floyd Mayweather Jr in a crossover boxing match. You can say that McGregor is all about the money. But that left hand shot, not his gift of gab is his money maker. You can ask Jose Aldo about that.