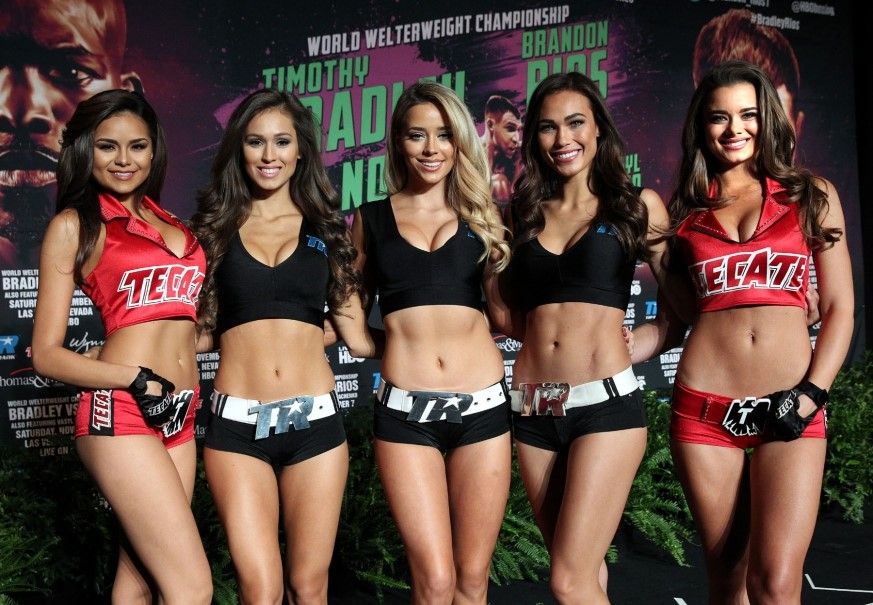 Ring girls are those lovely creatures wearing skimpy clothing who hold up signs in between rounds so that the crowd (mostly men) know which round it is.

Ring girls reportedly became a fixture in boxing events after a 1965 edition of Ring Magazine ran a photo of a Las Vegas model holding a sign at a boxing match. Fight promoters adopted the the practice and ring girls are now part not just of boxing events but also other fight sports like wrestling, kickboxing and mixed martial arts.

The feminine contrast of a beautiful ring girl against the backdrop of the savage masculinity of boxers fighting it out certainly adds to the entertainment factor. The sight of scantily clad women were originally intended to attract spectators and create a Las Vegas-like spectacle in between rounds. But there’s more to it.

The role of a ring girl is an important one. They take a specific route across the boxing ring, ensuring that they are visible from every angle while holding the placard indicating the round number to come next and reminding the thousands in attendance and the millions watching on TV how many rounds have been completed and how many more to go.

But Ring girls these days are aren’t just ring girls. Most of these girls have other jobs and some are even professionals. All of them are hot and some are hotter than the others. We’ve listed down the Top 10 hottest ring girls and did a little research on their personal backgrounds. Here they are:

Dessie Mitcheson is a regular in all of the major fights sponsored by Tecate. She is most popular for being one of the main round girls for the iconic “Fight of the Century” or better known as the Mayweather vs Pacquiao bout of 2015.

Born and raised in Western Pennsylvania, Dessie’s mother was a cosmetologist and it was her mom who introduced her to the world of beauty at a young age. At the age of 18, she competed for Miss Pennsylvania USA and finished in the Top 10. That experience led her to join other beauty contests and she went on to win several beauty titles including Face of Playboy Intimates, Face of the MGM Grand Las Vegas, Miss Pennsylvania Intercontinental and Maxim Magazine’s Hometown Hottie. These achievements led her to move to Los Angeles to pursue modelling full-time. She is currently taking acting and hosting classes in LA with the hopes of entering the film and TV industry.

One of Corona’s crowning jewels is 5-5 model Samantha Kumiko.  Born on May 3, 1992 She’s more than just a pretty face and a sexy body as she is a certified nurse with a degree of BSN from DeSales University. If you’ve been watching boxing fights religiously, you’ll remember her as the ring girl who was hilariously frightenedin the background when Deontay Wilder made his “Bomb Squad” scream during an event ( was it during the weigh-ins?) related to Wilder’s bout with Luis Ortiz.

Forget that moment, this ring girl’s resume is worth mentioning  Samantha’s biggest casting so far is being one of the lead round girls for the 2017 mega fight between Floyd Mayweather Jr. and MMA superstar Conor McGregor. She has also worked other high profile bouts such as Paulie Malignaggi vs Adrien Broner, Miguel Cotto vs Austin Trout, Daniel Jacobs vs Peter Quillin, James DeGale vs Badou Jack and most recently Carl Frampton vs Leo Santa Cruz 2.

Stephanie Ann Cook is one of the leading ring girls for Top Tank’s TR Knockouts. She was the 2015 Round Girl of the Year as voted by Round by Round Boxing fans. Stephanie Ann was  born in Rockford, Illinois but raised in Phoenix and is a spokesmodel for “It Ain’t Chemo”, a non-profit organization that provides care supplies, comfort, advise and emotional support to cancer patients.

In 2010 at the Hawaiian Tropic Zone in Las Vegas, she joined the Tuff n’ Uff Ring Girl contest and placed 5th but earned the job anyway. She would become one of the amateur MMA promotion’s top ring girl and in 2013 was rumored to be on her way to the UFC as an octagon girl after appearing in the Palms UFC events. She never made it among the likes of Arianny Celeste and Brittney Palmer but the UFC’s loss is boxing’s gain as she is now all over Top Rank’s major events such as Lomachenko vs Walters and Crawford vs Molina.

Rachel McDonough is one of the longest tenured TR Knockout Ring Girls and is considered as the promotion’s top round girl. Her most notable ring outings were the Manny Pacquiao vs Miguel Cotto bout, the first fight between Pacquiao and Timothy Bradley and Pacquiao vs Marquez 2. He favorite boxer? Timothy Bradley.

Rachel was born on April 16, 1991 and is of Mexican and Irish descent. Aside from her work inside the boxing ring, she is a professional dancer who focuses on dancing styles like hip-hop and jazz. She was casted in several productions like Swan Lake and Sleeping Beauty. In 2017, Rachel won the Miss North Hollywood beauty pageant.

Along with Samantha Kumiko, Jess Harbour and Tawny Jordan, Kyra Keli worked as one of the lead ring girls for the 2017 fight between Floyd Mayweather Jr. and Conor McGregor. She also worked Gennady Golovkin vs David Lemieux, Miguel Cotto vs Canelo Alvarez and Daniel Jacobs vs Peter Quillin. Aside from being one of Corona’s top ring girls, Kyra has also worked with Maserati and Toyo Tires.

Kyra was born on September 6, 1990 and was raised in New York. Her mother used to own a travel agency but now operates concierge services in Alaska and Hawaii. Her grandfather owned movie houses and was the head film buyer for RKO Stanley Warner. That’s perhaps the reason why she was drawn to the theater and film ( film mostly). She earned a degree in film and television from the New York Conservatory for the Dramatic Arts in 2013.

Born on January 2, 1992 to parents Ralph Ring and Solyne Tolentino in Peoria, Illinois, Tawny Jordan attended Peoria Notre Dame High School before transferring to Richwoods High School where she graduated in 2010. The following year, while attending Illinois Central College, she began her modelling career after she was approached by a photographer who wanted to take pictures of her. She would later move to Chicago to pursue her modeling career and it was there where she landed a job as one of Corona Beer’s boxing round girls.

Jordan’s first major appearance was for the 2013 showdown between Floyd Mayweather Jr. and Canelo Alvarez. However, her biggest event to day was the 2017 boxing match between Mayweather and UFC superstar Conor McGregor. She was also part of the press tour for the Mayweather vs Marcos Maidana rematch, Adrien Broner vs Khabib Allakhverdiev and was part of the Battle of Los Angeles spectacle between Leo Santa Cruz and Abner Mares.

Yes, she is part-time an MMA ring girl but usually, she is a regular working Golden Boy Promotions fights for Tecate. Whether it’s on HBO Latino fight cards at Fantasy Spring Casino or LA Fight Club at the Belasco Theater, she’s also done ringside coverage during a few instances to prove she isn’t just all beauty but that she’s got the talents too.

Gloria was born on  June 7, 1991 in San Diego, California. Outside her ring girl duties, Gloria is a well-known personality who models swimwear and other clothing using social media, notably Instagram, by posting photos on her personal account. In December 2017, Friedley hosted the 10th annual Babes in Toy Land Charity drive at the Avalon in Hollywood benefiting the Midnight Mission.

Tecate’s Janira Kremets is one of the most popular ring girls right now. Born on January 15, 1991, Kremets is of Cuban, Mexican and Lebanese origin. She used to work as a front desk attendant at Gold’s Gym in Las Vegas, but obviously, she was born to do more than that. She’s currently Tecate’s ace ring girl but she has also appeared in UFC events as well as graced magazines like Sports Illustrated, Maxim.and Las Vegas Magazine

Some of the more high profile fights that she’s worked include the Mayweather vs Pacquiao fight of 2015 and the Timothy Bradley Jr. vs Jessie Vargas fight in 2016. She also worked Gennady Golovkin’s title defense against Dominic Wade and most recently, we saw her during Canelo Alvarez vs Liam Smith.

Kiara Gomez was almost always seen alongside Samantha Kumiko. The two were “partners” in Corona’s top boxing events, especially in the east coast. But she is now with Matchroom Sports as part of their Matchroom Girls. Aside from Matchroom, Kiara is also a model for Monster Energy and joins tours for sports like Formula 1 and PBR. In school, she was an experienced soccer player and cheerleader. Kiara competed at the Miss America New Jersey and placed in the Top 10. In 2014, she launched her own swimsuit line called “Kiara Nicole”.

Born on February 24, 1992 in the United States and of Colombian descent, Kiara Gomez had her first modeling gig at the age of 16 for the brand SayWhat. From there, she’s gone on to be featured in magazines like Women’s Health, Body Magazine and Metropolis Nights. She has also appeared in shows like the 9th season of MTV’s Wild and Out and in scripted shows like Person of Interest, A-List NYC and White Collar.  She was also part of the cast of Columbia Pictures’ Men in Black 3.

Along with Corona’s other top round girls, Jess was in the Mayweather vs Pacquiao fight of 2015. A couple of other notable fights she’s worked with were Sergey Kovalev vs Andre  Ward 1 and Abner Mares vs Jesus Cuellar. She was also named as Corona’s Boxing Ring Girls of the Month for September 2016. As a model, she’s walked the runway for  Christian Siriano, Naked Girl Bikini, Catwalk Boutique, Beach Candy Swimwear and Tavik Swimwear. She’s also modeled for Monster Energy,Hankook Tires and Zing Vodka.

Jess was born on October 3, 1990 in San Diego, California and she is a graduate of San Diego State University. Aside from standard and southern American, Jess is also fluent in British and Australian dialects. Her hobbies include yoga, running, swimming, gymnastics and tennis. In March of 2017, Jess announced that she is engaged to boyfriend Jeremy Maul.