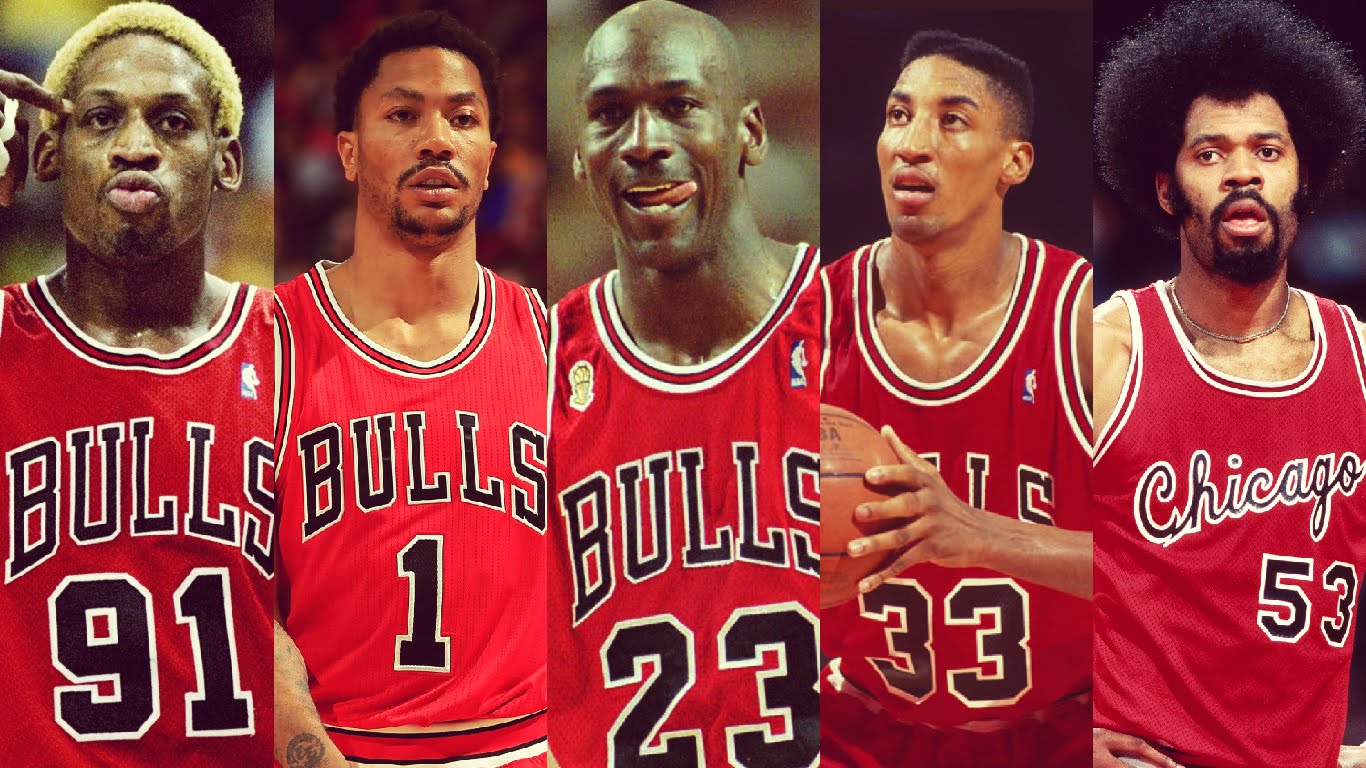 The Top Chicago Bulls Players of All - Time

The Chicago Bulls were the dominant team of the 90’s and the early part of the 2000 decade. During their reign, they won a total of six NBA champions in two three peats.

The Bulls were blessed to have the greatest of the greats play for them. He was the reason why they won six titles in an eight year span from 1991 to 1998. You can only imagine what would’ve happened had he not retired for two years in between the two three peats. That is another story though. Our story is about history and who made the history possible. But if you think that we’re just talking about Michael Jordan, think again.

Before Jordan arrived in the Windy City, there were those who carried the torch and paved the way for the Jordan Rule. These were the Bulls who kept the team going through the years. Chicago didn’t have too much success before Jordan arrived. The Bulls won only one one division title before him and that was in 1975. But the years before and after that were filled with excitement and pride as the city awaited for the messiah that would lead them to the land of promise.

After Jordan’s retirement, the Bulls now have a total of six NBA championships, 6 conference titles and 9 division titles. They are also the first team in NBA history to win 70 games in a single season and are the only NBA franchise with multiple titles that are undefeated in the NBA Finals. These triumphs wouldn’t have been possible without MJ. But Jordan wouldn’t be Air Jordan without the Chicago Bulls and the other greats before him.

Let’s take a look at the top Chicago Bulls players of all-time: 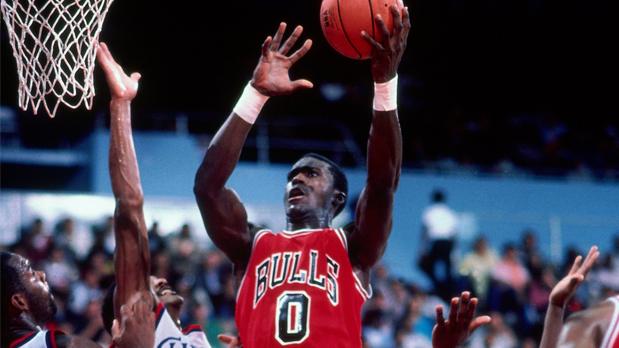 Before a guy named Jordan came along, there was Orlando Woolridge.

Drafted 6th overall by the Bulls in 1981, Woolridge was an explosive scorer who liked the ball in his hands. During the 1984 season, he became the focal point of the Chicago offense. Unfortunately, a kid named Michael Jordan arrived the following season. Woolridge and the rookie Jordan combined to average more than 51 points per game. He would lead the Bulls in scoring in 1986 and was the last player to do so before Jordan took over. Woolridge was unstoppable on the court but his scorers mentality clashed with Jordan and the Bulls cleared him to pave the way for the man who would later become the greatest of all-time.

He was a two time participant in the NBA Dunk a Contest in 1984 and 1985. Woolridge only played five seasons with the Bulls so he isn't among its All-time leaders. But he will always be remembered as the last Bulls' superstar before Michael Jordan dominated the scene. 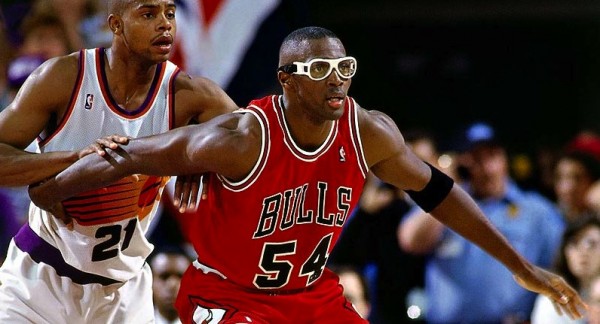 Horace Grant was famous not only for winning NBA titles with Michael Jordan but for wearing some of the coolest goggles in NBA history.

After starring for Clemson in college, Horace Junior Grant was drafted by the Bulls with the 10th pick of the 1987 NBA draft. Grant played back-up to strongman Charles Oakley during his rookie season but was promoted to the starting line-up after the Bulls traded Oak to the Knicks. Grant was not just an excellent interior defender and rebounder but he also knocked open jump shots with consistency and was an great passer. In Game 6 of the 1993 NBA Finals, Grant famously kicked out the ball to a wide open John Paxson who nailed the game winning three that sealed the Bulls three peat.

Grant was a fourth time member of the NBA All-Defensive second team and was an All-Star in 1994. Aside from his three titles with the Bulls, Grant won a fourth ring with the Lakers in 2001. He is the 7th All-Time best rebounder in Bulls history and 6th best in both blocks and steals. 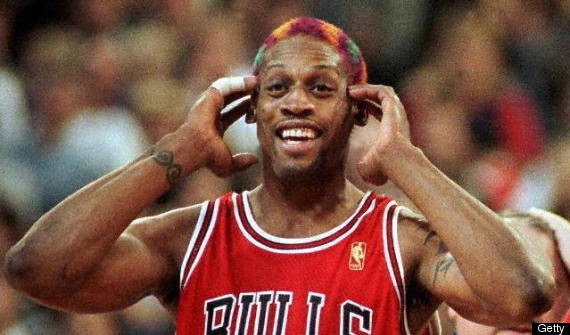 When the Worm played in Detroit, he was pretty much a normal guy except that he was already a bad boy. And why not? His back to back title teams in Detroit were labeled as the Bad Boys for their physical brand of play.

When he arrived in Chicago, Rodman not only brought his bad boy toughness to the Bulls. He gave color, literally to the once only red, black and white franchise. Rodman played only three seasons with the Bulls but his impact was undeniable. Rodman led the league in rebounds for seven consecutive seasons, including all three with the Bulls. His artistry on the boards was key during the Bulls' 72-win season. More importantly, Rodman brought toughness on and off the court to a young champion team and helped mold the dynasty.

Rodman was a back to back Defensive Player of the Year winner in 1990 and 1991. He led the NBA in rebounds from 1992-1998. He was a member of the NBA All Defensive Team seven times and won a total of five NBA titles. He was a part of the Bulls' second three peat team. 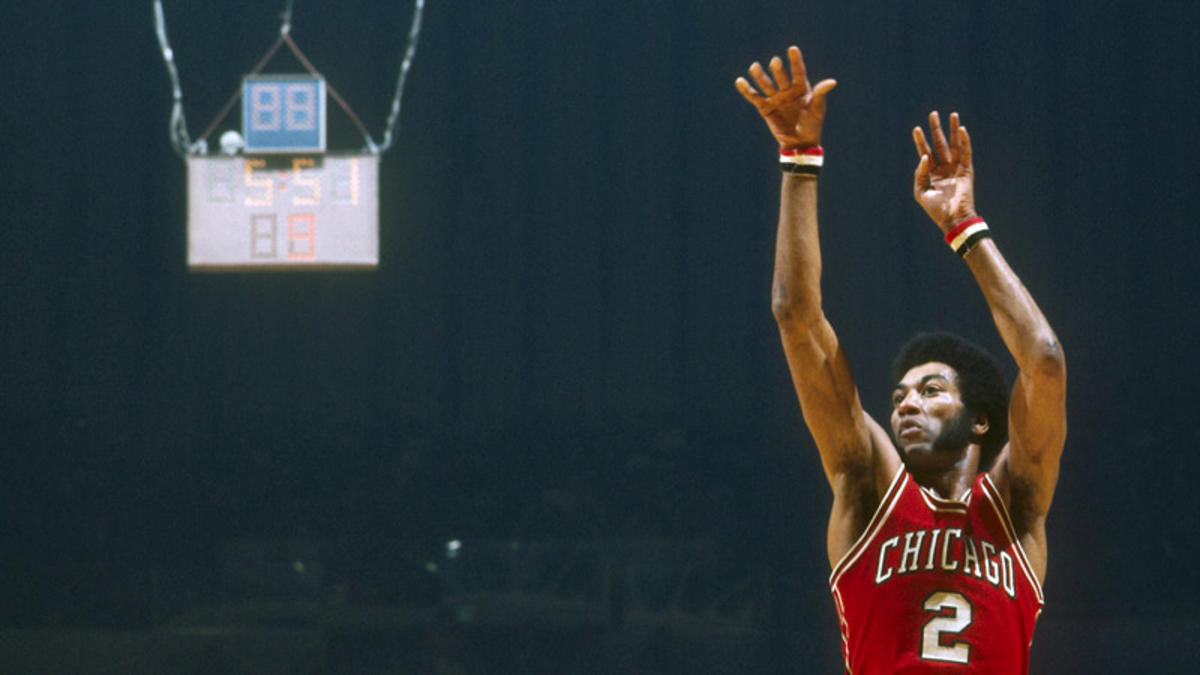 Stormin Norman was one of the best defensive players to ever suit up in a Chicago Bulls uniform. Together with Jerry Sloan, they formed one of the most dreaded defensive backcourts during their time.

Because he stood just 6-1 and was primarily a defender, Vaen Lier was under the radar when Chicago drafted him in the third round of the 1969 NBA draft. But he quickly gained fame in the Windy City for his tenacity and aggression.

Van Lier was an All-Star in three of six seasons with the Bulls. He was a three time NBA All Defensive first team member and the NBA assists leader in 1971. He is also 4th All-Time in both the steals and assists leaderboard in Chicago. Van Lier had the distinction of owning the NBAs longest made field goal ( 84 feet ) for 24 years before Baron Davis broke it in 2001. 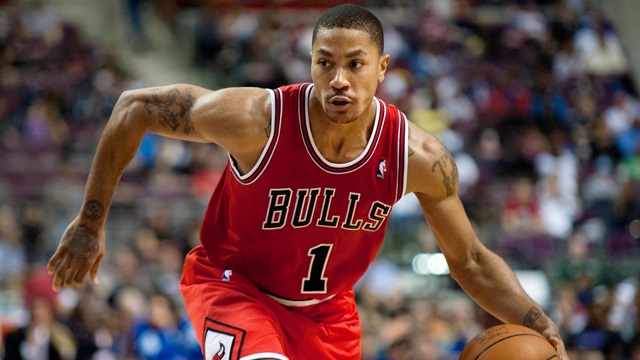 Everybody thought he would be the next Michael Jordan, until injuries came along and took away the prime of his career.

Known as Pooh for his looks, Derrick Rose was one of the best players to ever play for the Bulls. His impact to the Bulls and the city of Chicago is second only to Michael Jordan. Rose is the youngest MVP in NBA history and is only the second player in franchise history to win an MVP award. He led the Bulls to the NBA’s best record during his MVP season. Unfortunately, Rose tore his ACL during the 2012 playoff run. He's struggled to be healthy ever since.

Rose was Rookie of the Year in 2009 and won the All-Star weekend Skills Challenge that season. He was a three time NBA All-Star ( before his injuries ) and was All-NBA First team during his MVP season. Despite his short-lived tenure in Chicago, Rose is the team's 10th All-Time leading scorer and 5th best assists maker.

Artis Gilmore was one of the NBA’s best centers after the NBA-ABA merger. He was a terrific rebounder and defender but what made him stand out was his efficiency in making his shots. Gilmore had the 2nd best FG percentage in ABA history, 2nd best in the NBA and fourth overall in the NBA/ABA combined.

Although Gilmore's dominant days were in the ABA where he was Rookie of the Year and MVP in his first season, he spent five solid season with the Bulls. After Chicago selected Gilmore first overall in the ABA Dispersal Draft, he took them to two playoff appearances and was an All-Star selection in four seasons.

Gilmore was a six time All-Star who led the NBA in Field Goal percentage for four consecutive seasons. He was an NBA All-Defensive team selection in 1978. He is the Bulls' All-Time blocks leader and their seventh best scorer of all-time. He is also the 6th best rebounder in franchise history.

There are only four jersey numbers retired by the Bulls, Bob Love's #10 is one of them. It's also why we’re choosing him among our Top 4.

After being traded to Chicago during the 1969 season, Bob Love saw his career go off. Providing the needed scoring punch for the Bulls, Love was one of the NBA's first scoring big forwards. He had the size of a power forward but possessed the speed and quickness of a two-guard. Love led the Bulls to two straight Western Conference Finals appearances in 1974 and 1975. Although they lost both times, he became one of the most popular Bulls' players of his era.

Love is he Bulls third best All-Time scorer and 10th best rebounder. He was a three time NBA All Star who also made three consecutive NBA All Defensive Second Teams and two All-NBA Second Team selections. His jersey is the second of four retired by the Bulls. 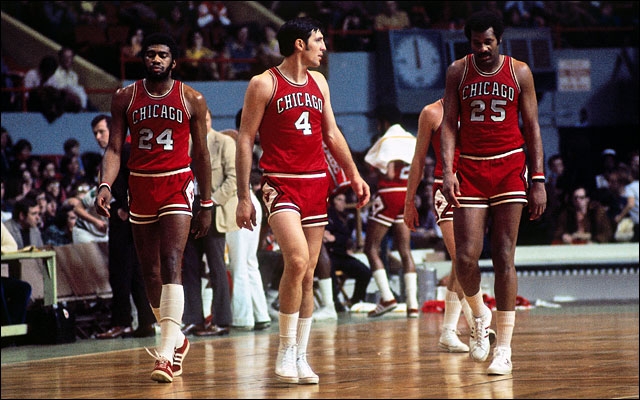 Jerry Sloan went from Bullets to Bulls after he was traded by Baltimore to Chicago one year after being selected as the 5th overall pick of the 1965 NBA Draft. In Chicago, Sloan was know. As the 'Original Bull' because of his tenacious defense. Sloan led the Bulls to their only division title outside the Michael Jordan era and took them to eight consecutive playoffs berth.

Sloan was a two-time NBA All-Star and a four-time member of the NBA All-Defensive First team. He is 5th All-Time in Chicago's scoring and rebounds list. Sloan's jersey number is the first ever retired by the franchise. 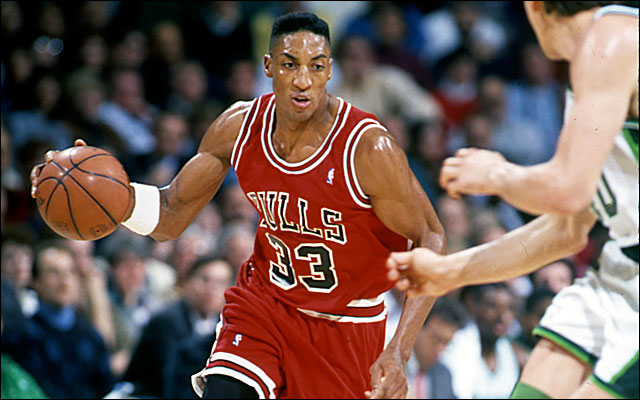 Ever heard of the term point forward? That description was coined after Scottie Pippen.

The Robin to Jordan's Batman, Pippen was one of the most versatile players of all-time. His ability to facilitate the offense made him thrive in Phil Jackson's offense. Pip wasn't just one of the best perimeter defenders ever, he was also one of the best playmakers regardless of position. Although he was overshadowed by Michael Jordan all his career, there was no doubt he was equally great.

Pippen was a seven time All-Star and a member of the NBA All-Defensive first team for eight consecutive seasons. He made the All-NBA First team three times, second team and third team twice each. He was part of the original Dream Team of 1992 and also part of the 1996 U.S Men's basketball team. Pippen was one of the 50 Greatest Players of the NBA in 1996. He was inducted to the Hall of Fame as a player and a member of the 1992 Dream Team. 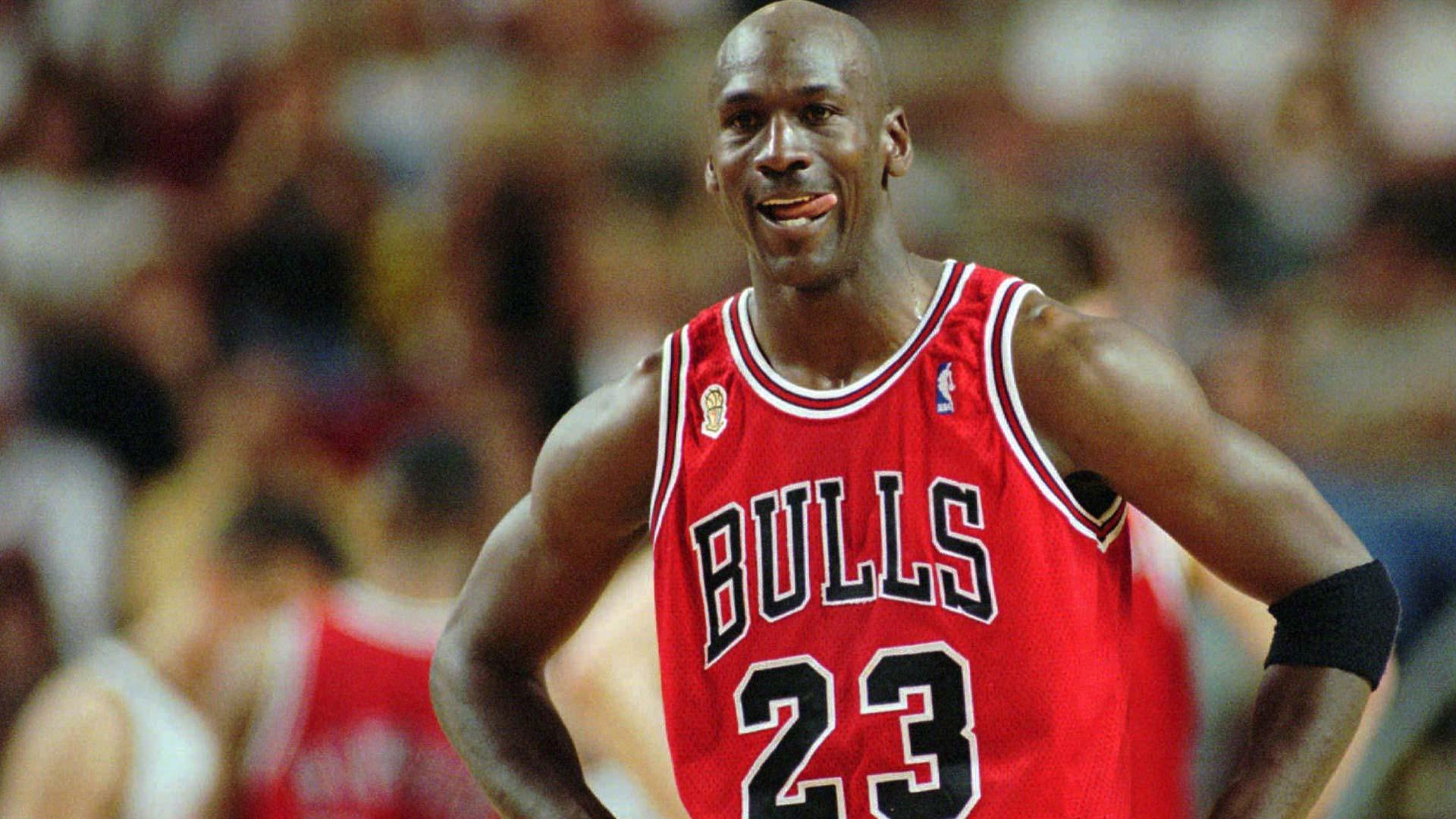 Need we say more? Bow your heads in reverence to the greatest player in the history of the sport. If Michael Jordan didn't retire in 1993, there was a possibility that the Bulls would've won 8 consecutive NBA titles.

MJ was the best scorer the NBA has ever had. He had it all: from dunks, circus shots, jump shots and later in his career, the three point shot. More importantly, he delivered countless game winners in any imaginable condition. Game on the line, you know the ball would go to Jordan. You just couldn't stop him from hitting the game winner.

Jordan's impact was felt both inside and outside the basketball court. He revolutionized the game and took it to new heights. Basketball wouldn't be as popular as it is today if not for Michael Jordan- the greatest Chicago Bull of all-time.