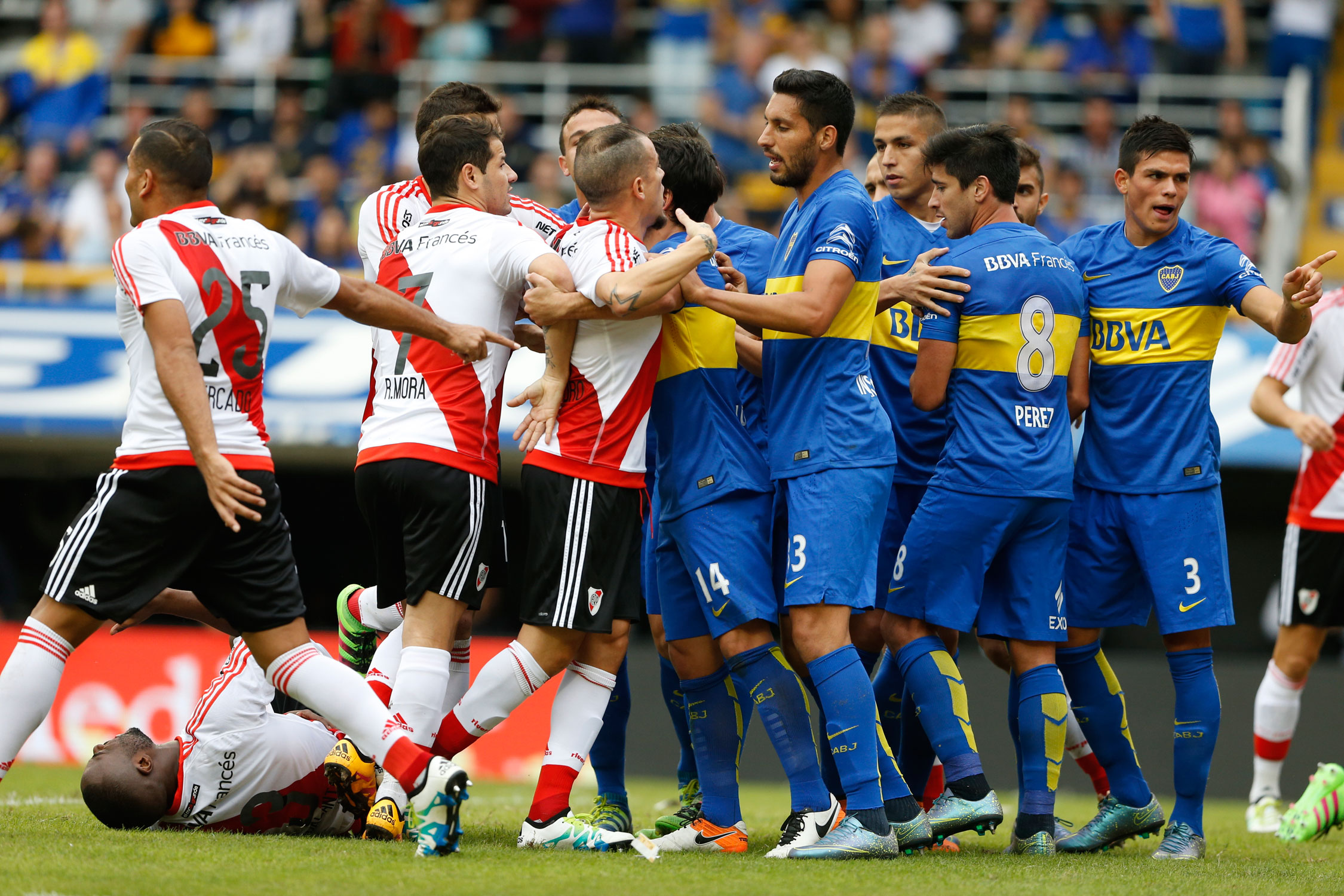 Rivalries make sports much more exciting and in the sport of football, the biggest and fiercest of rivalries are the local football derbies.

A football derby is a clash between two rivals of close geographical proximity. These are two teams who come from the same town, city or region and whose fans live on the same streets, go to work together or take the same bus going home. For one day, these neighbors become arch-rivals, battling each other for pride and bragging rights.

These fixtures have been going on for eras, some even for more than a century. But while the players, coaches and managers come and go, these rivalries have been passed on from one generation to another.

With each fixture as heated and as important to their respective followers, here are Football’s Top Derby Matches, in no particular order:

Derby of the Eternal Enemies: Panathinaikos-Olympiakos 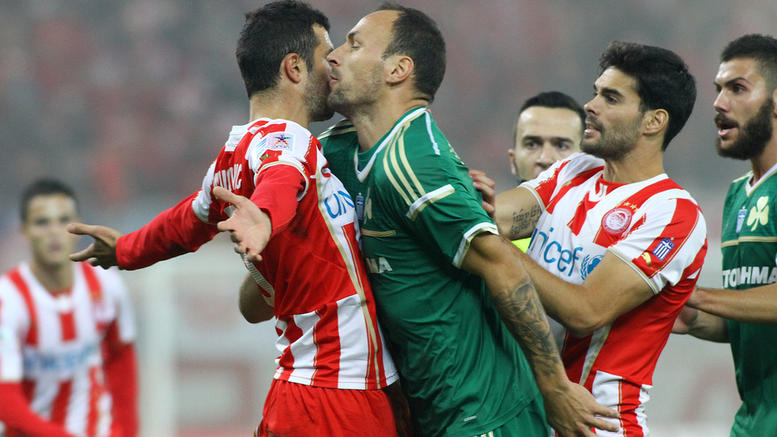 This derby is between the two most successful sports clubs ( not just football clubs ) Greece, hence the ‘godly’ reference. Also called the Mother of All Battles, this is a local derby in the urban area of Athens but is prestigious all over the country because of Athens’ importance as the cradle of ancient civilization. The rivalry is rooted mainly in the difference of social class. Panathinaikos fans are belonging to the rich upper class of society while Olympiakos fans are more of the working middle class. 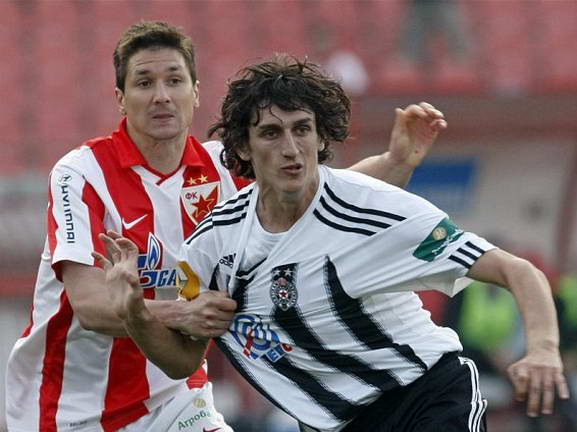 The rivalry between Top Serbian clubs Partizan Belgrade and Red Star Belgrade is one of the world’s top multi-sport rivalries as both clubs are not only bitter rivals in football but in basketball and handball as well. An important aspect of this Serbian rivalry are the fans who have their own names. Red Star fans are known as the Delije or Heroes while the Partizan faithful are called Grobari or Undertakers. The most infamous day of this rivalry was in 1999 when a 17 year old boy was killed when a flare set off from the opposite stands struck him. 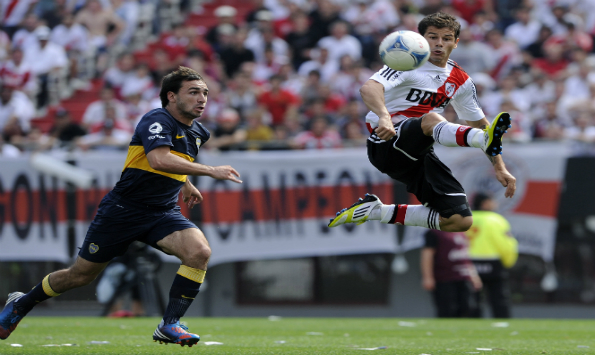 This football rivalry is prefixed as ‘Super’ because Boca Juniors and River Plate are the most popular and successful teams in Argentina. According to Argentine numbers, the fans of these two clubs represent around 70% of football fans in Argentina, hence making every match a national affair. Not really a social class rivalry, River Plate fans are nicknamed Los Milionarios because they come from the affluent district Nunez while the Boca fans are called Xeneizes in reference to being part of the local Italian immigrant community. 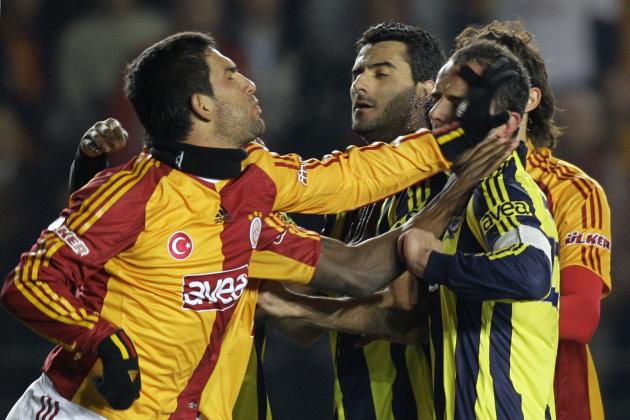 This derby is also known as the Eternal rivalry and is fought by two of the most successful clubs in the Turkish Super Lig. Istanbul clubs Fenerbahce SK and Galatasary SK. This fixture started out as a friendly in 1908 but officially became a fierce rivalry in 1923 when the first riots unexpectedly happened in Taksim Stadi. The field turned to a warzone once the players began fighting and the referees had no choice but to abandon the match. 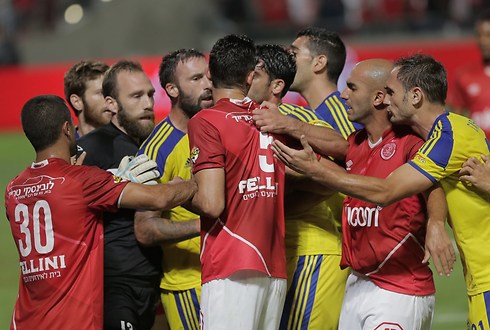 The Tel Aviv derby is the heated rivalry between Maccabi Tel Aviv and Hapoel Tel Aviv. The rivalry dates back to 1931 when they first met in league play and since then a total of 33 Championships and 38 National Cups have been won by both squads with Maccabi enjoying more success than its rivals. Maccabi is associated with the upper middle class while Hapoel have a more worker base, this rivalry including also a political views. Maccabi is associated with right-wing politics while Hapoel is with the left-wing politics. The rivalry also extends to basketball although Maccabi is a powerhouse in that sport. 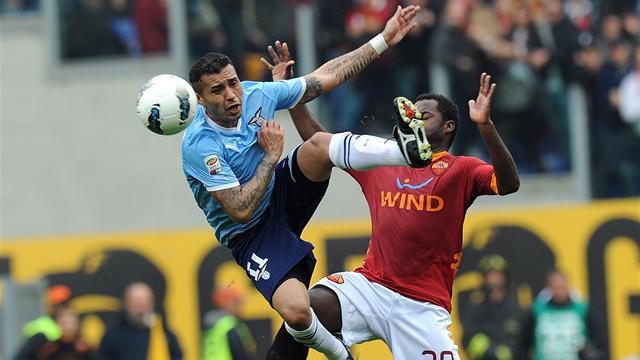 Derby Capitolino, Derby of Rome or Derby del Cupolone. However you call it, this derby is played by only two teams based in Rome: AS Roma and SS Lazio. The rivalry emanated from the 1927 merger of Roman clubs in order to form a unified team called Roma. Lazio was the only major club in Rome not to join the merger. Traditionally, Lazio’s supporters occupy the North end of the Stadio Olimpico while Roma’s fans position at the South end. 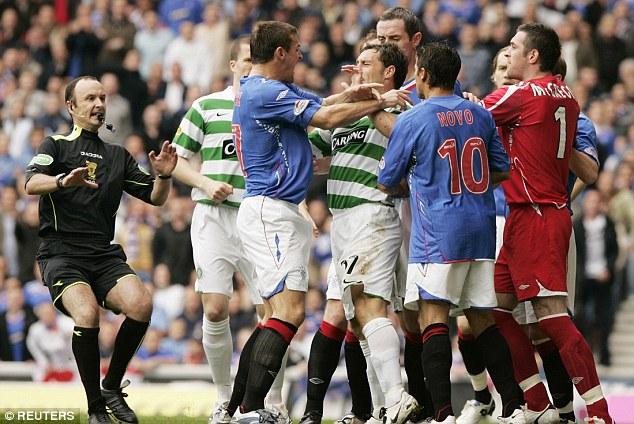 The Old Firm Derby is the rivalry between the two most successful clubs in Scottish football history-Rangers and Celtic, who are both based in Glasgow. This is one of the oldest rivalries, with both teams among the 11 original members of the Scottish Football League which was formed in 1890. While the Old Firm Derby is a massive income generator for the country’s economy, it has been embedded deeply in Scotland’s history and has even contributed to its social, political and religious division. 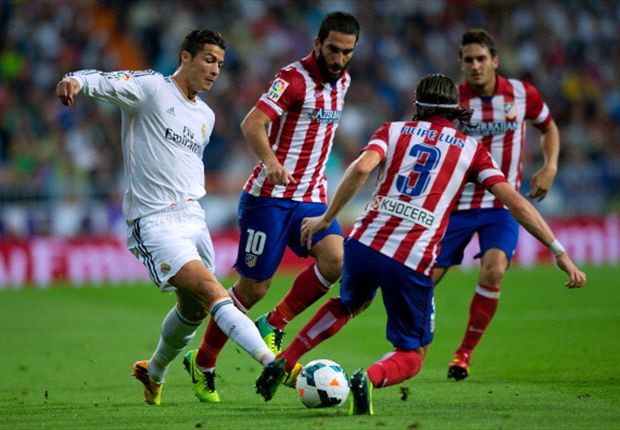 The Madrid Derby is the name given to the rivalry between Spanish inter city rivals Atletico Madrid and Real Madrid. Known also as El Derbi Madrileño, this highly anticipated Spanish Football match dates back to the Francoist period. Historically, Real Madrid have won majority of the matches including all but one match in the last decade. Real’s success on the field and its resources enable the team to get greater support from all of the city while Atletico’s regular fan base are the working class from South of Madrid. In this rivalry, Atletico is branded as a ‘rebel club’ while Real Madrid is considered by Atletico fans as ‘the team of the government’ ever since a minister in the 1950’s called the club as ‘the best ambassadors we’ve ever had’. 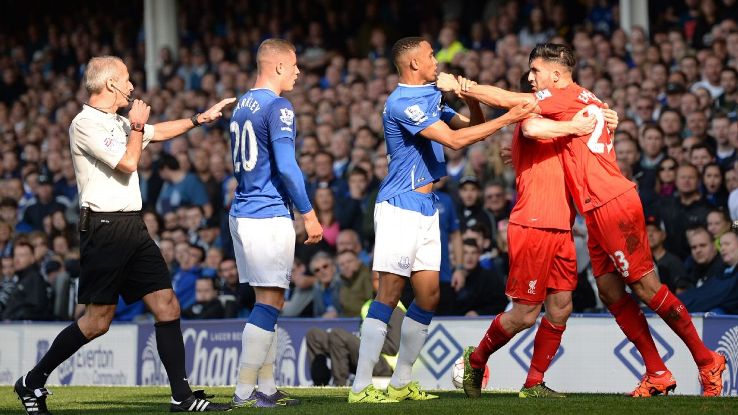 The Merseyside Derby is one of the most fiercely fought fixtures in England. Yet despite Everton and Liverpool playing more than 200 games against each other ( which is the most in English Football history ), this rivalry seems to get more intense by the match. This actually began as a friendly derby between inter city squads but became competitive and heated since the birth of the Premier League. And with both squads now looking to become Liverpool’s pride at the expense of each other, friendships don’t exist when the Merseyside Derby kicks off. 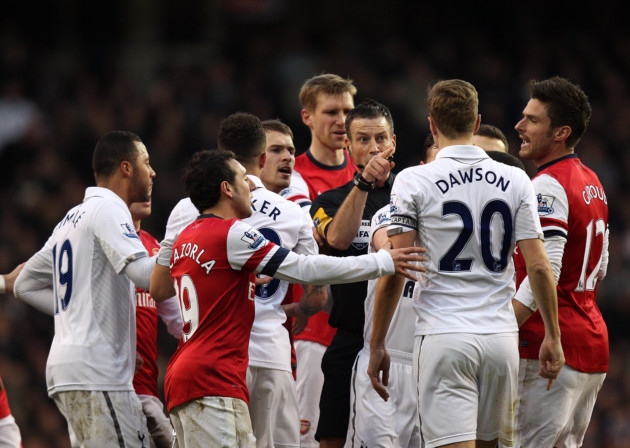 This refers to the local derby between London based teams Arsenal and Tottenham Hotspur. Also one of the hotly contested fixtures in London, this rivalry boasts of exciting contests that are usually played at a high pace and with the best attacking football style. Arsenal has historically dominated this derby although the Hotspur has tightened the affair in the last few seasons by reinforcing their squad in their quest to become the best club in London. 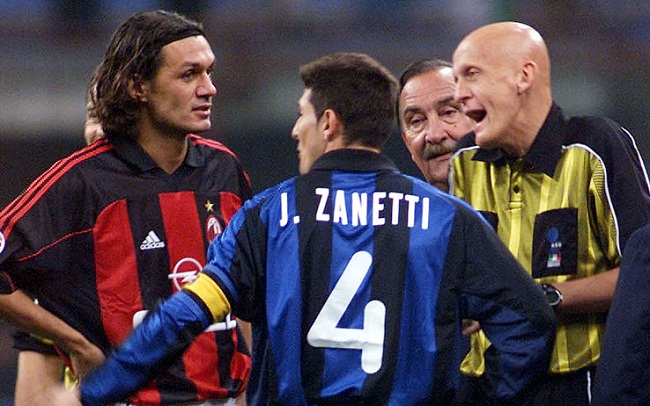 The Derby Della Madonnina ( The Milan Derby ) is the name of the rivalry between Milanese teams Internazionale and Milan. The name Madonnina ( Little Madonna ) is a reference to one of Milan’s top attractions which is the statue of the of the Virgin Mary on top of Duomo. It is the only major crosstown derby in association football that is always played on the same venue, The San Siro, which is home to both Internazionale and Milan. 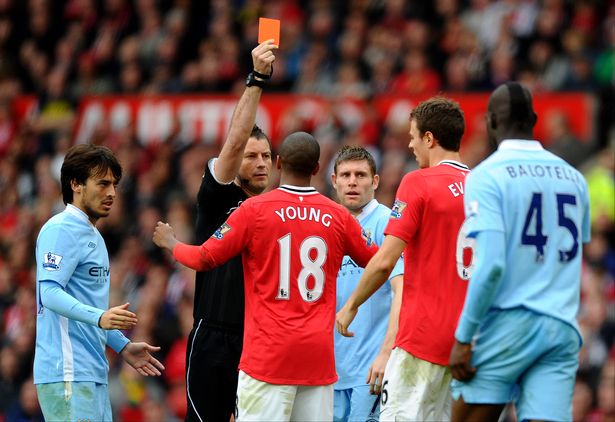 Another rivalry that goes back to the 1800’s the Manchester Debry is played between Manchester United and Manchester City. With the city’s recent overhaul and the presence of big named players, this rivalry attracts large crowds, the largest of which was 78,000 when both teams were playing at Maine Road in 1947. Like all the other derbies, this one has had its share of color with the second best team in the city always looking to make their rivals feel what it is to be looking from below. 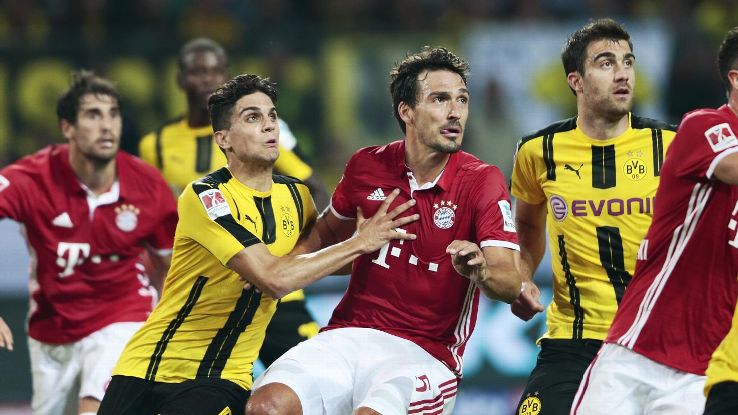 The Der Klassiker is without doubt the biggest derby in Germany. Also known as the German Clasico, this fixture is played by the two most dominant German clubs, Bayern Munich and Borussia Dortmund. Since 1994, the two have combined to win 17 German titles -12 for Bayern and 5 for Dortmund and only four other clubs have won the title during this period. This derby has drawn several record breaking attendance in Germany while at the same time delivering the best display of football in the country.