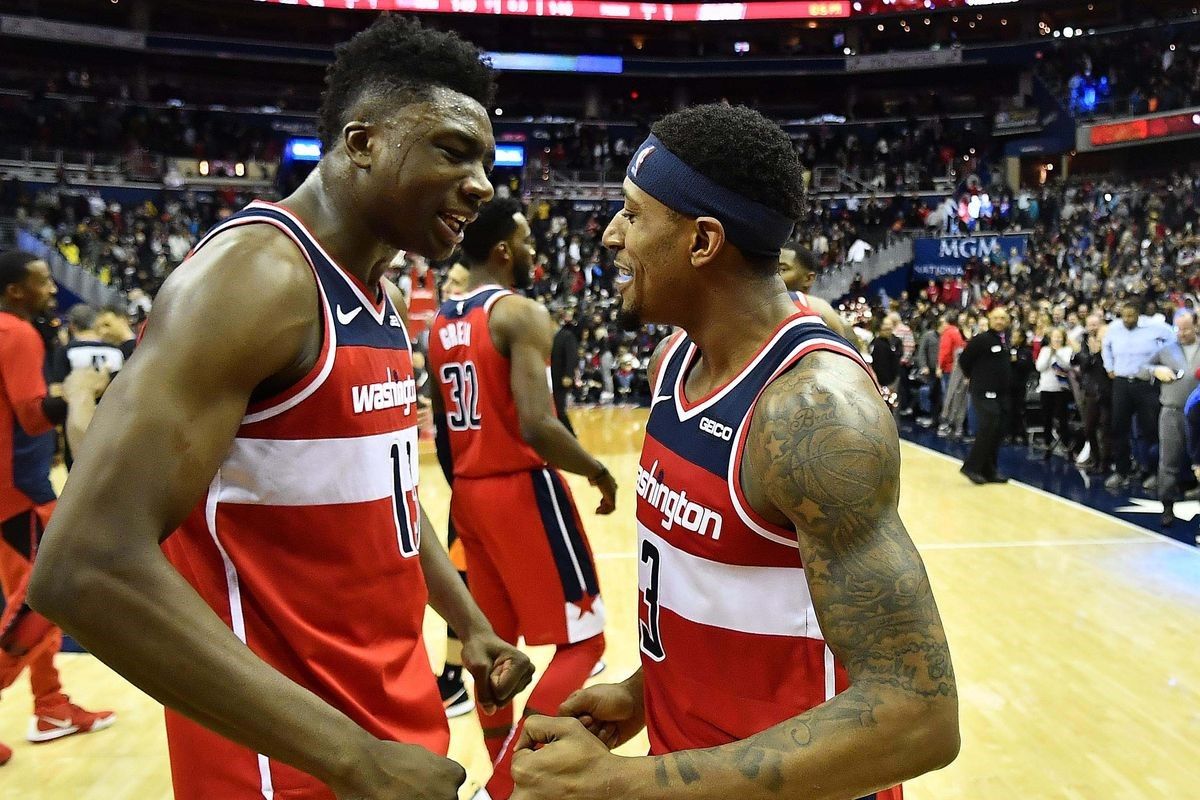 Thomas Bryant Making The Most Of His Opportunity In Washington

The Los Angeles Lakers’ 2017 rookie class was a special one. Kyle Kuzma, Josh Hart and Lonzo Ball are big reasons why LeBron James’ new team has started the season at 19-13 and fourth place in the ultra competitive Western Conference.

But if we look back at the 2017 NBA Draft, we’ll find out that the Lakers had one more draft pick aside from the three we mentioned earlier. Lonzo was of course picked 2nd overall while Kyle Kuzma was the 27th pick via Brooklyn as part of the D’Angelo Russell trade. Then the Lakers traded their 28th pick Tony Bradley to the Utah Jazz in exchange for the 30th pick which became Josh Hart. During that trade too, the Lakers got an additional second rounder which became 42nd pick Thomas Bryant.

Bryant was a highly touted forward from Indiana after averaging 12.6 points and 6.6 rebounds as a Hoosier sophomore. Bryant recorded 52 blocks, made 51.9% of his field goal attempts, shot 73% from the free throw line and went 23-60 from the collegiate three point range. Bryant was ranked as the 37th best player in the class by DraftExpress.com and during the NBA Draft Combine, he had the second tallest standing reach at 9 feet and 4.5 inches and the third longest wingspan at 7-6.

Bryant played with Kuzma, Hart and Ball during the Las Vegas Summer League and did get decent exposure there. But when the season began, Bryant moved back and forth from the main roster to the G-League because he had plenty of competition in the roster. At center, the Lakers had veteran Brook Lopez and the prospect Ivica Zubac. At forward, Los Angeles had Julius Randle and Brandon Ingram. In all, Bryant played a total of 15 regular season games for the Lakers, averaging a measly 1.5 points and 1.1 rebounds in four minutes of playing time per game. Bryant ended up getting waived by Los Angeles but was picked up the Wizards who then were short of a big man after trading Marcin Gortat.

But Bryant’s excitement in the Nation’s Capital was short lived. The Wizards signed veteran big man Dwight Howard in free agency which meant that Bryant would be pushed further back in the rotation with Washington already having Ian Mahinmi. Still, Bryant was lucky to have a regular roster spot and his fortunes changed when Howard was put on the injured list with a lingering back injury that needed surgery. With Howard out, Bryant was thrust in the starting lineup and he has since thrived in that role.

Bryant has started a total of 17 games this season for Washington and he’s averaging 8.4 points and 5.3 rebounds in 19.1 minutes of playing time per game. Bryant is also averaging 6.9 screen assists per 36 minutes which is just slightly off the league leading 8.6 per 36 minutes that his predecessor Gortat is currently averaging with the L.A. Clippers. So not only has Bryant been doing what Gortat used to do for the Wizards, he has also began to produce the numbers when given playing time. Bryant’s Per 36 minutes average is currently at 15.3 points, 9.8 rebounds and 1.8 blocks per game. Impressive, really for someone who hasn’t gotten much NBA exposure yet. But Bryant’s problem is that head coach Scott Brooks loves to play with small ball most of the time and put Jeff Green or Markieff Morris in Bryant’s place especially during fourth quarters. On Saturday night though, Bryant made a case for himself by turning in a career performance on a historic night by the Washington Wizards.

The Wizards played Saturday without superstar guard John Wall who missed their home game against the Phoenix Suns with flu-like symptoms. Without Wall, the Wizards turned to backcourt mate Bradley Beal to deliver the goods. The game turned out to be a closely fought one and needed three extra periods to decide a winner. The Wizards came out victorious in the end, thanks to Beal and Bryant who turned in historic performances.

Aside from the Wizards making history, Bradley Beal also made his mark on Saturday night. Beal scored 40 points, grabbed 11 rebounds and issued a career-high 15 assists to record his first ever career triple double. Now, not only was that a triple double in the books, it was the second ever 40-point triple double in Washington Wizards history after Chris Webber in 1995. It was also the 8th 40-point game of Beal’s career, putting him on  tie with Michael Jordan who also had eight forty point games with the Washington Wizards.

But as we said earlier, it was Beal and Bryant who starred for the Wizards on Saturday night. As for Bryant, the second year big man finished the game with a career-high 31 points and 13 rebounds. Bryant shot a perfect 14-14 from the floor and made all three of his free throws to finish with 31 markers. Bryant scored 16 of Washington’s 18 points during a stretch between the first and second overtimes in an impressive display. Bryant also made history on Saturday as his 14 field goals attempts without a miss was the most by any player outside Wilt Chamberlain who owns the NBA record with 18 field goals without a miss. Said Bryant after the game:

“It’s amazing,” the second-year forward said. “I had no idea. I was just in the flow of the game. I just let the game come to me, and as soon as I felt like I was in the rhythm of it, I just went out and took it.”

Bryant was in great rhythm throughout the game as he played 36 minutes and outplayed 2018 #1 overall pick DeAndre Ayton all game long. Watch Bryant’s herculean effort here:

With the win, the Wizards improved to 13-20 on the season. They are still off the playoff pace right now and have been a disappointment so far this season. With rumors of discord and their recent trade for Trevor Ariza, Thomas Bryant’s big game on Saturday could be the start of something big for the Wizards. Or it could be just one of those career nights only. Regardless, it was a big win for the Wizards who are struggling mightily with Gortat traded and Howard injured. Thomas Bryant may have announced his arrival. Let’s hope Scott Brooks notices that and give the young man more exposure in the coming games.