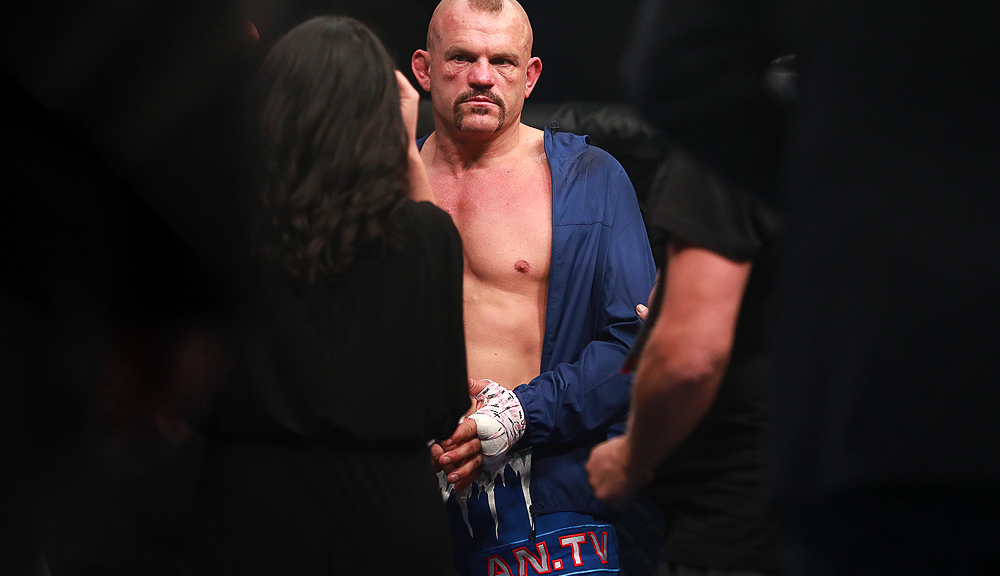 Tito Ortiz finally got a win over rival Chuck Liddell.

The Huntington Beach Bad Boy caught Liddell with a one-two against the fence and the Iceman crumbled to the ground, face first, in the first round of the main event of Golden Boy Promotions’ first foray in to MMA on Saturday night at the Forum in Inglewood, California.

Liddell looked stiff and lost as he entered the cage for the first time in eight years. Ortiz, who had fought a total of 8 times since Liddell retired, the last of which was in January 2017 when he submitted Chael Sonnen at Bellator 170, immediately noticed that and broke into a naughty grin. Known for his wrestling more than his striking, Ortiz chose to stand and trade with Liddell in the middle of the cage.

At one point, Ortiz even fared Liddell to hit him in the face. Ortiz won the early exchanges. Liddell would later connect with some punches but none were meaningful enough to make Ortiz notice. Moments later, another flurry of exchanges between the two found Ortiz landing a straight right and that immediately put Liddell down awkwardly. The referee didn’t waste any time and stepped in. The fight was over at the 4:24 mark of the very first round.

As Liddell was still face planted on the canvass, Ortiz did his trademark grave digger ritual to mark his victory and revenge over the longtime rival who knocked him out twice before. If this fight happened maybe one decade ago, it would have meant something to the sport. But with both fighters now in their 40’s and already members of the Hall of Fame, this was the sad ending that nobody wanted to happen.

The Ending That Nobody Wanted To Happen

Fans wanted Liddell to end the trilogy the way he ended their first two fights. But aside from the mohawk and the ice on his shorts, there was nothing in Chuck Liddell that resembled the Iceman on Saturday night. He wasn’t even a shadow of his old self. The moment he threw his first punches, we knew he had no chance. They were off, slow and didn’t appear to have their sting. Ortiz saw that right away that he chose to stand and trade with a foe who had knocked him out twice before.

Ortiz himself was no spring chicken. The Huntington Beach Bad Boy is already 43. He had retired after losing to Forrest Griffin at UFc 148 in 2012, came back to fight for Bellator and retired again after defeating Chael Sonnen in his fourth Bellator bout. But between him and Chuck Liddell, Ortiz wasn’t just five years younger, he had fought more recently and more consistently.

So it was but wishful thinking that Liddell would come out victorious over Ortiz in the same manner as their first two meetings. There were only two possible endings to Saturday’s fight: that the two would slug it out in a three round battle royale where Ortiz would win by decision or that Ortiz would put Liddell to sleep in the most vicious and humiliating way possible. We hoped it would be the former but deep inside we knew that the latter had the better chance of happening. It did. Now we’re saying this fight should have never happened in the first place.

But then who could stop Liddell and Ortiz from fighting? Golden Boy Promotion, the biggest boxing promotion in the world, announced earlier this year that it would be venturing into the progressing world of MMA. No problem with that. However, with Oscar De La Hoya knowing nothing or little of the beginnings of the sport, he booked a third fight between Chuck Liddell and Tito Ortiz because he knew he had a storyline and he had two former PPV stars who were willing to go at it a third time. De La Hoya didn’t think about what a third fight would do to their legacies.

The Third Fight Was Not Necessary

Liddell and Ortiz first fought in 2004 at UFC 47. They rematched two years later at UFC 66 when Liddell was UFC light heavyweight champion. Liddell won both fights. But even with Ortiz losing both, his legacy was already secure. The Huntington Beach Bad Boy was the one of the first PPV superstars of the UFC and he reigned as light heavyweight champion from 2000-2003, defending the belt successfully five times before losing it to Randy Couture.

As for Liddell, he too didn’t need a third fight. He is always the fighter who brought MMA into the mainstream of American sports and entertainment. He had already beaten Ortiz twice and convincingly both times. He reigned as light heavyweight champion from 2005-2007 and made four successful defenses of that title.

Prior to Saturday, both fighters had their legacies secure. Their rivalry was good 14 years dead. If there was one man who needed the third fight most, it wasn’t even Tito Ortiz. It wa Oscar De La Hoya who selfishly wanted his Golden Boy Promotions come up with a big debut in promotional MMA. For nostalgic reasons, the event was well-received although the PPV numbers aren’t out yet. But it made a buzz because even after they have long retired, Chuck Liddell and Tito Ortiz are icons of the sport.

Still, while people were excited to watch them fight again, nobody wanted it to end the way it did. But given the circumstances, there was no other way the fight would have ended. 48 year old Chuck Liddell who has been knocked out in four out of his last six bouts taking on 43 year old Tito Ortiz who was more active in the last six years? That was a no-brainer. Golden Boy should have never booked the fight in the first place. It was utterly unnecessary.

Have Mercy On Chuck

But it is what it is now. The fight happened. Liddell face planted and Ortiz announced his retirement for the third time.Good for Ortiz if he is indeed retiring for good. But as for Chuck Liddell, the guy isn’t thinking about retirement yet. Not even after the awful performance and terrible knockout loss.

“I don’t want to think about that right now,” Liddell said when asked if that was it (via MMA Fighting). “I mean, I’m not in the right state of mind to really talk about whether or not I’m done or not. But I felt good out there and I had fun, so we’ll see.”

Fine, he’s fine. Nobody can tell Chuck Liddell when to retire. That right is reserved to him and him alone. If he says he won’t stop fighting yet, nobody is stopping him. But if the promotions out there only have mercy on Chuck Liddell, then we won’t see him continue to tarnish his reputation with one bad loss after another. It’s not even just because of the losses in his resume. It’s about his health. Chuck Liddell can’t continue to take the same kind of damage over and over again.