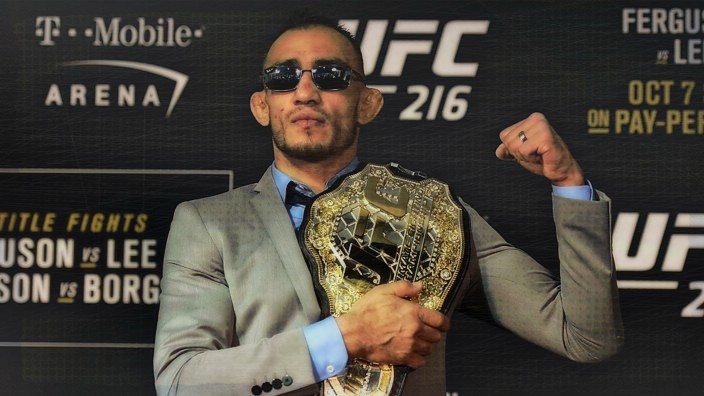 Tony Ferguson Pulls Out Of UFC 223 After Bizarre Injury

You read it correctly. And no, it’s not an April Fools Day joke. Neither is it a typo.

Interim UFC lightweight champion Tony Ferguson has pulled out from UFC 223 with an injury. That means his highly anticipated UFC lightweight title bout with Khabib Nurmagomedov this coming weekend is officially off.

If you still don’t believe it, it’s not your fault. But we’re past April 1 so we’re not pulling off an April Fools day joke. Not at all.

UFC President Dana White broke the news to ESPN on Sunday, telling Brett Okamoto that Ferguson tore his LCL a couple of days ago. And while such injury generally doesn’t need surgery, White said Ferguson actually tore it off the bone thus El Cucuy will need surgery.

Ferguson’s withdrawal comes six days before UFC 223 and it is the fourth time in as many times that a fight between Ferguson and Nurmagomedov has been booked but subsequently cancelled.

The two were originally booked to face each other at the finale of TUF 22 in December 2015 but Nurmagomedov withdrew from the event with an injury. A second meeting was scheduled for UFC on Fox 19 in April 2016 but this time around, it was Ferguson who suffered an injury and had to pull out of the event.

At UFC 209, it appeared that the two were finally going to clash inside the Octagon with everything going as planned during fight week. But to everybody’s shock, Nurmagomedov was hospitalized on the day before the event and just before the weigh-ins due to ‘weight management medical issues.’ He was deemed unable to compete and hence the fight was cancelled a third time.

The entire fight world was hoping that UFC 223 would be the day that the world’s two best MMA lightweights would finally settle their score inside the cage. But it seems that there is an unseen force beyond human comprehension that doesn’t seem to want it to happen. Or is there?

Most Bizarre Injury Ever 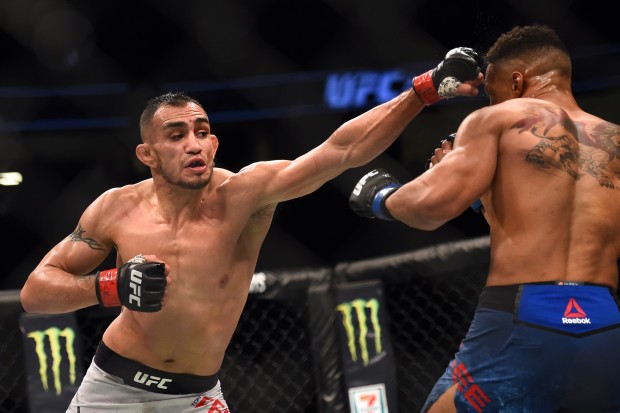 Fighters pulling out of events with injuries are a common thing in the UFC. Fighters get hurt during training while others have weight cut issues. But Tony Ferguson’s latest injury should be the most bizarre UFC injury ever. How could a fighter get injured for literally taking a step in the wrong direction?

That’s correct. According to Brett Okamoto of ESPN, sources said that Ferguson injured his knee after suffering a ‘trip’ while in a studio fulfilling his media obligations for UFC 223. Ferguson was just walking when he saw someone that he wasn’t expecting to see. The report said that El Cucuy ‘veered sharply’ and then tripped. Simple as that, really.

In his official statement, Ferguson didn’t specify how he suffered the injury but confirmed that it did occur at a studio on Friday while he was completing his pre fight media obligations. According to Ferguson, both his doctor and the UFC doctor told him that he won’t be able to fight this weekend.

Ferguson further wrote that one doctor said that he would need surgery but didn’t specify who. However, he said that he will be seeing a specialist to make a final determination on how he will go about with his treatment.

El Cucuy also apologized to the fans, the UFC, Khabib, his teammates and his family. He said that he was looking forward to getting back and defending his belt. But apparently, there won’t be no more belt to defend as the UFC has booked another title fight to save UFC 223. 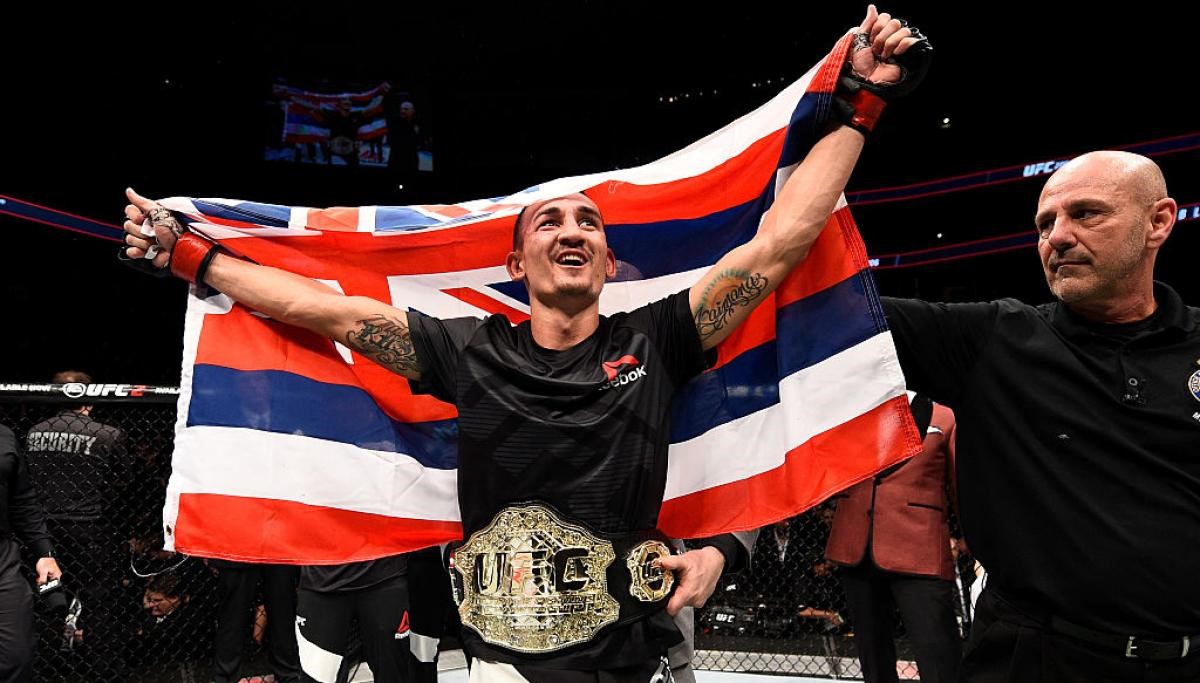 According to White, the bout will still be for the undisputed Lightweight championship meaning, Ferguson’s interim belt will be meaningless ( if it isn’t already ) after Saturday night when the UFC crown’s a new undisputed champion.

Holloway has fought at featherweight since he entered the UFC in 2012. The highest weight he’s fought in the promotion has been at 149 pounds when he knocked out Clay Goddard in a catchweight bout at UFC Fight Night 49 in 2014. However, Holloway fought as a lightweight prior to his stint with the UFC. The Blessed One won the regional X-1 Lightweight Championship in 2011.

Max Holloway won the UFC featherweight title with a third round TKO of former longtime featherweight champion Jose Aldo at UFC 212. He vindicated that win with another third round stoppage of Aldo during their rematch at UFC 218 last December. Holloway has won 12 fights in a row, 9 of them by stoppage, and he has not lost since dropping
A unanimous decision to Conor McGregor in 2013.

It’s surprising why the fight between Holloway and Nurmagomedov is a title bout, considering Holloway isn’t ranked at lightweight nor has he fought a single bout in that weight class. But given that he is a champion who is moving up in weight and stepping in on six days notice, the UFC would’ve offered him the moon only to save an event which was less than a week away from happening.

It’s a win-win situation for Holloway who stands to become only the second fighter in UFC history to hold two world titles at the same time. Conor McGregor was the undisputed UFC featherweight champion ( like Holloway ) when he knocked out Eddie Alvarez at UFC 205 to win the lightweight belt. 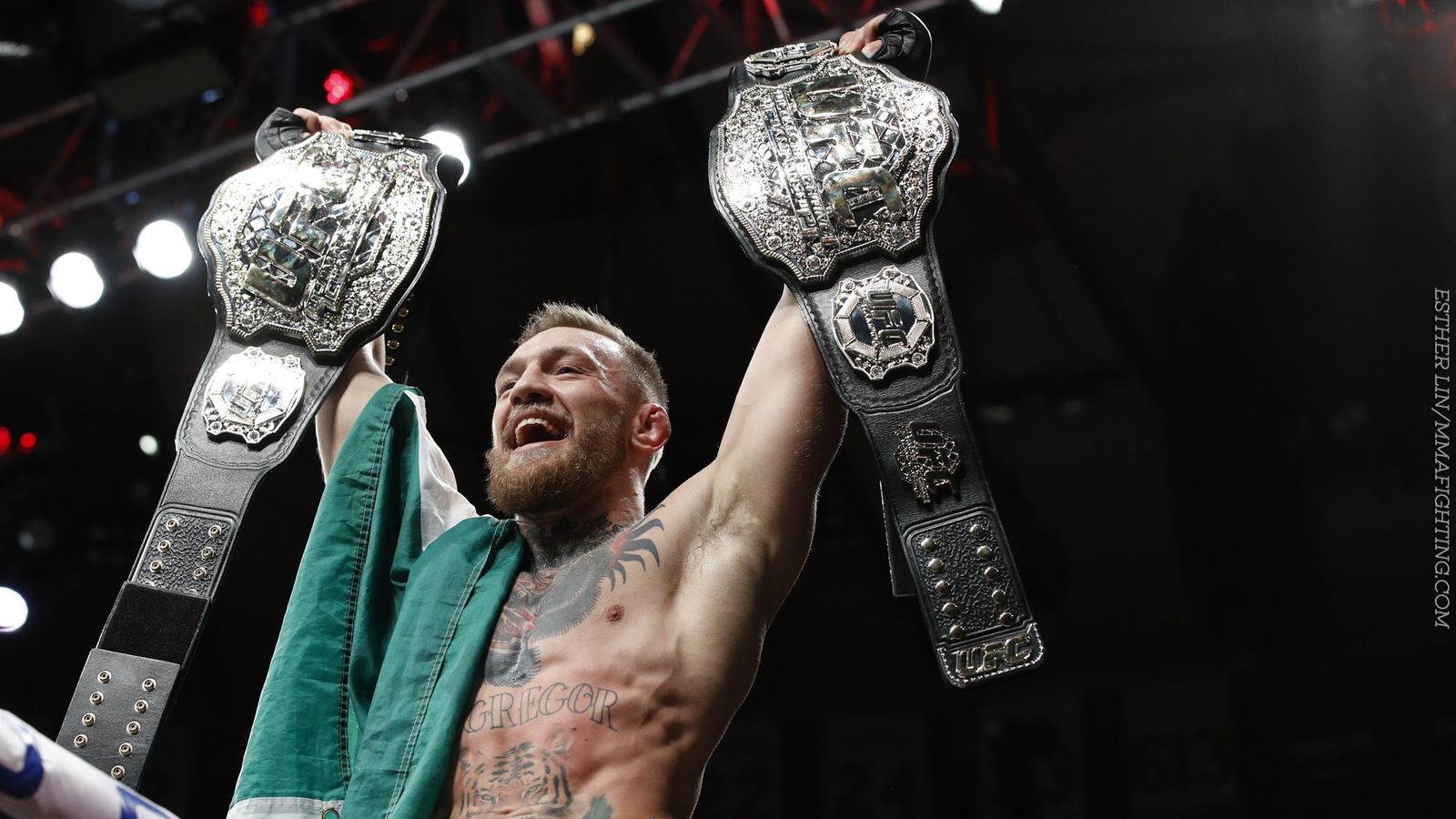 McGregor is the center of all these because he is ( or was ) both the UFC featherweight and lightweight champion. He never defended both belts once, the reason why he was stripped of the featherweight belt, which Holloway and Aldo disputed at UFC 212. McGregor is still the UFC’s lightweight champion on paper but he was due to be stripped once a new champ will be crowned on Saturday night.

Shortly before Dana White announced that Holloway would be taking over Ferguson’s spot, Nurmagomedov took time out to call out McGregor in social media, tweeting ‘where are you now?’ while tagging McGregor. But McGregor’s camp hasn’t responded to Khabib nor has given any statement on the latest developments.

Dana White however offered an excuse for McGregor. The UFC boss said that it would not be possible for McGregor to make weight in six days notice’. He added that McGregor isn’t the kind of fighter that he ( White ) would throw in as an emergency replacement. White said that a fight involving McGregor should have enough time to be promoted, adding that the Notorious One could return in September.

McGregor has not fought since defeating Alvarez in November 2016. Instead, he figured in a boxing contest against undefeated ( but retired ) boxing icon Floyd Mayweather Jr last year. McGregor reportedly made $100M for that fight and that’s the reason why he is not in a hurry to return to the octagon. Not only does McGregor still have plenty of cash to spend, his asking price has also since increased according to him.

This mess was started by McGregor himself. If he made hundreds of millions of PPV and gate revenues for the UFC, he also made a mess out of the weight classes. After he won his titles, McGregor never defended both of his belts, causing a vacuum in two weight classes and forcing the UFC to create interim champions. That’s what Holloway was and that’s what Ferguson is.

But McGregor was their cash cow hence the UFC allowed him to run the promotion on his own terms. They disregarded the rankings and let PPV numbers run the show. Now they are paying the price. The UFC is once again forced to apply another Conor McGregor rule - fighting for a world title without a ranking in the weight class, just to save UFC 223.