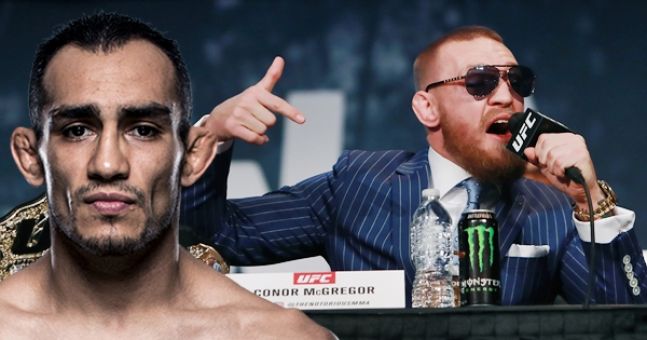 Those were the strong words of Tony Ferguson after capturing the UFC interim lightweight title on Saturday night at the main event of UFC 216 at the T-Mobile Arena in Las Vegas, Nevada.

Ferguson was addressing his one-liner to champion-in-hiatus Conor McGregor. The brash Irishman is taking the year off from the UFC after his multi-million dollar payday against boxing legend Floyd Mayweather, Jr. McGregor hasn’t fought since winning the 155 pound title from Eddie Alvarez last November and doesn’t look to keen on doing so very soon.

Good While It Lasted

McGregor’s absence is the reason why the main event at UFC 216 happened. An interim lightweight title fight between Ferguson and 7th ranked contender Kevin Lee. The two got into each other’s nerves during the build-up to the fight. Bu after Ferguson forced Lee to tap out on Saturday night, the fighters showed mutual respect:

It wasn’t the high profile fight that McGregor always brings to the table. But it was a fight between the two of the best lightweights in the planet. And it was a good one while it lasted.

After a short feeling out period, things heated up quickly as the fighters exchanged knockdowns in Round 1.

They exchange knock downs in round 1!! #UFC216 pic.twitter.com/rxOjvN2Jvi

Both men had their moments but it was Kevin Lee who landed the more telling blows. Lee secured a takedown and finished the round on top of Ferguson, raining down heavy punches. He owned the round but we knew Ferguson isn’t going to go out easily.

The second round was much better for Ferguson. He landed his jabs with accuracy and began to clip Lee. The Motown Phenom’s punches no longer had the same sting as they had in the first round. Still, it was competitive although Ferguson appeared to have his foe all figured out.

My Mat, Not Yours

Before the start of Round 3, Ferguson could be heard talking to Lee, who looked like he was trying to gather himself at the opposite corner. El Cucuy said:

"This is my mat, not yours. This is mine." @TonyFergusonXT in between rounds ..#UFC216 pic.twitter.com/dpkhjIhOaB

But it was Lee who owned the mat at the start of Round 3. He scored his second takedown of the fight early but could not take advantage of the position and Ferguson kicked out. On their feet, Ferguson continued to move forward. He landed well but picked his shots. Lee exploded for another takedown.

On his back, Ferguson landed big elbows on Lee. He secured an armbar that looked deep but Lee managed to step over. El Cucuy kept firing elbows from the bottom position. He saw an opening and went for the triangle choke. It was deep. Kevin Lee tapped. A new interim lightweight champion has been crowned.

On a night where Demetrious ‘Mighty Mouse’ Johnson set the record for most consecutive title defenses by any UFC champion, it was Tony Ferguson who stole the show.

Sure, Mighty Mouse’s victory earned him his 11th consecutive title defense ( new all-time record ) and 13th consecutive victory ( tied for 2nd all-time ) overall. But Ferguson was on a winning streak of his own. Coming into the fight, El Cucuy had won 9 fights in a row, the longest in the history of the lightweight division. By adding a 10th, Ferguson solidified his claim as the best lightweight in the planet.

Yet Tony Ferguson’s triangle choke of Kevin Lee from the bottom position was equally remarkable. When you watch a title fight end in a submission and you don’t know how the fighter did it, that’s greatness. We saw that with Mighty Mouse. We saw that with Tony Ferguson. Difference was D.J. was heavily favored to win. Ferguson was in a dog fight.

A heartbroken Kevin Lee said he is giving 170 pounds a thought. But don’t count him out yet at lightweight. Lee is only 25 years old and gave up tons of experience against a crafty vet like Tony Ferguson. But he gave a good account of himself on Saturday night. It was just that El Cucuy was the better man.

It remains to be seen if Ferguson will be facing Conor McGregor next. The rumors are that the UFC may be looking at the grudge match between McGregor and Nate Diaz. McGregor though said that his priority will be defending his belts. But if that was really his priority, he would’ve fought Ferguson, not Mayweather.

With McGregor, it’s always been the money regardless of what he says. Ferguson has gotten tired calling out McGregor so he’s giving him the option to vacate. McGregor is the UFC’s cash cow and top draw but he cannot hold a weight class hostage. McGregor has to face Tony Ferguson or he should be stripped of the title.