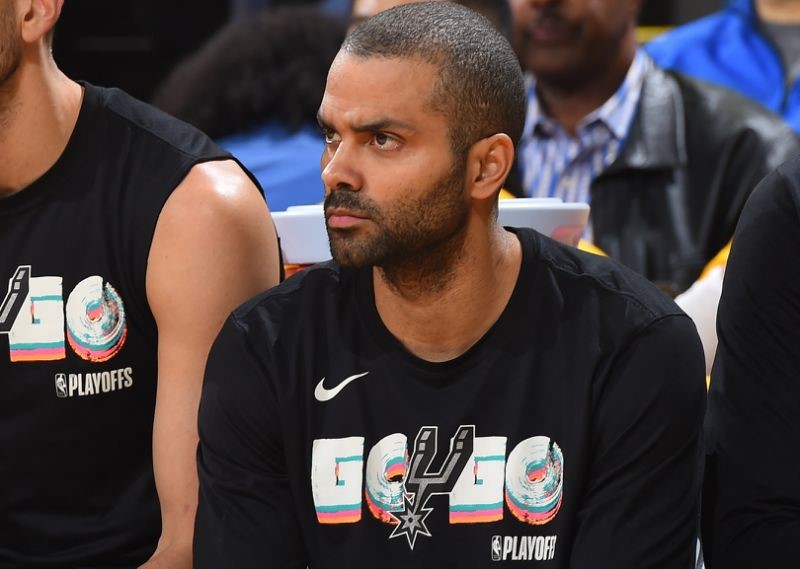 The San Antonio Spurs’ offseason has mostly been about Kawhi Leonard. The disgruntled forward has reportedly want out of San Antonio. Meanwhile, the Spurs are said to be working round the clock in search of an equitable deal for their franchise player. That said, we all thought that Leonard leaving would be the first big news for the Spurs this summer. We were wrong.

Veteran point guard Tony Parker announced that he has accepted a two-year deal worth $10M to play for the Charlotte Hornets. Parker, who has spent his entire 17 year NBA career with the Spurs trailed only Dirk Nowitzki, Kobe Bryant, John Stockton, Tim Duncan and Reggie Miller as the players who with the longest tenure with a single NBA team.

Parker, Duncan and Manu Ginobili formed a trio that led the Spurs to four NBA titles since the start of the 2000 decade. But after Duncan retired a couple of seasons ago and Parker now leaving for Charlotte, only Ginobili remains from that core. The 40 year old Argentinian signed a two year deal in 2017 but may not play beyond this season now that Parker is gone.

With such eras as the Memphis Grizzlies’ “Grit and Grind” and the Los Angeles Clippers’ “Lob City” ending in the last couple of seasons, the departure of Tony Parker also signals the end of an era in San Antonio. That era may not have a name like the others, but it was without doubt the most successful in the NBA in the last two decades.

Success With The Spurs

Parker reportedly called up Spurs head coach Gregg Popovich prior to announcing his decision to sign with the Hornets. For his part, Popovich issued a lengthy statement acknowledging Parker and thanking him for his role in making the Spurs one of the most dominant and without doubt the most consistent franchise in the league in the last three decades. Said Popovich:

“It’s difficult to put into words how important Tony Parker has been to the Spurs franchise over the past two decades. From his first game in 2001 at age 19, TP has impressed and inspired us - day-after-day, game-after-game, season-after-season - with his passion, dedication and desire. We are grateful to Tony for 17 years of truly amazing memories. While the four championships, six All-Star appearances and four All-NBA selections highlight his resume, the biggest joy for me has been to have the pleasure of watching TP grow up before our eyes. All of us in the Spurs organization will miss having Tony in our program and wish him and his family the best as he continues his remarkable career in Charlotte.”

Parker was the Spurs’ 28th overall pick in the 2001 NBA Draft. Unknown to many, it was current Oklahoma City Thunder GM Sam Presti who first brought Parker to the attention of Spurs’ General Manager RC Buford. After showing Buford VHS tapes of the then 19 year old sensation playing in France, they decided they were going to pick him in the draft.

Parker’s early years with the Spurs were not easy. He took over the point guard position which was formerly run by veterans Avery Johnson and Terry Porter. In his rookie season, Parker played with David Robinson and Tim Duncan. It seemed that the NBA would be too big for the young Frenchman. But Parker ultimately found his mark and when he did, he was a key figure in one of the most successful franchises in the history of the NBA.

Individually, Parker improved with every year. When he first entered the NBA, Parker was known for his speed and ability to finish. But the longer he played in the NBA, he developed a consistent jump shot which made him more difficult to guard. During his peak, Parker also grew a three point shot. He shot at least 35% or better from behind the arc from 2013-2016.

In his early years with the Spurs, Parker had his share of disagreements with Popovich but the older he got, Parker emerged as an incredible team leader on and off the court. Later, he would master Popovich’s system and become Pop’s extension inside the basketball court.

Role And Numbers Going Down 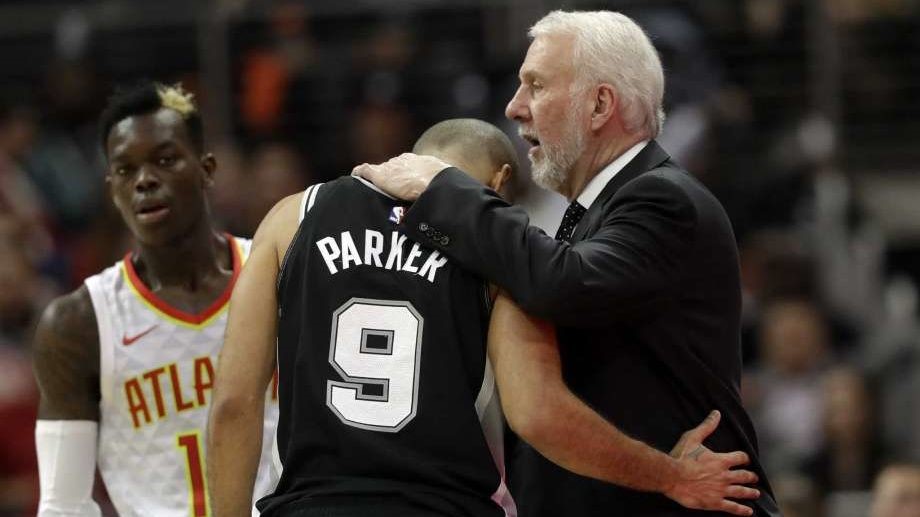 But age had already slowed down the once lightning quick Parker. But after rupturing his left quadriceps tendon in May 2017, his struggles began. He missed the first 19 games of the 2017-18 NBA season and when he returned, he lost whatever was left of his explosiveness.

Parker played just a total of 55 games last season, the fewest games he’s played in his entire NBA career. He made just 21 starts which was again, the fewest starts he’s ever had in any NBA season. Not only that, Popovich asked him to surrender his starting job to Dejounte Murray. Although Parker accepted that decision, you’ve got to wonder if it was wholehearted knowing Parker’s competitive nature and his determination to return from injury.

Murray more than doubled his scoring average and playing last season at 8.1 points and 21.5 minutes per game. He also set the Spurs single season record for most rebounds by a point guard. But despite getting the starting job and more playing time, the second year man from the University of Washington only averaged 2.9 assists per game for the Spurs.

In contrast, Parker played just 19.5 minutes per game and averaged 7.7 points, 1.7 rebounds and 3.5 assists per game last season All of those numbers were career lows for the Frenchman Similarly, Parker’s effective field goal percentage of .472 was his lowest since his rookie season.

With his age and his stats pointing in opposite directions plus his role in the team slowly disappearing before his eyes, it was probably the right time for change anyway. The era where Parker shined ended with Tim Duncan’s retirement a couple of years back. With Popovich also rumored to be leaving soon and Manu Ginobili already 40 years old, this was bound to happen soon. The difference here is that Parker gets to leave on his own terms. 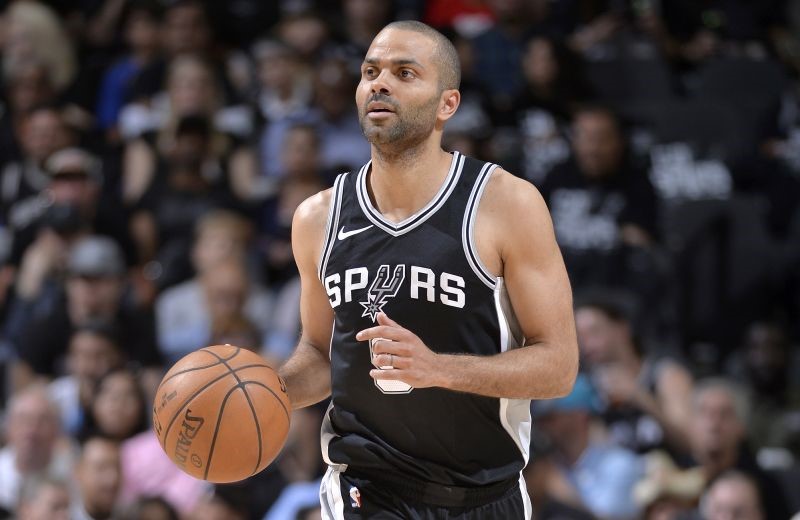 Before he decided to go to Buzz City, there were rumors that at least six teams were interested in Tony Parker. According to Parker himself (via The Undefeated), he turned down offers from the Spurs and the Denver Nuggets in favor of playing for the Charlotte Hornets. There are plenty of reasons why Parker fits in Charlotte.

One is the fact that Charlotte’s new coach James Borrego was an assistant coach for Gregg Popovich in San Antonio. Not only will Borrego be bringing a similar style of basketball in Charlotte, Parker has also played under Borrego and knows him very well personally. That will not only make his transition to his new team easier, having Borrego there also assures him that his talents will be utilized to its maximum level.

Another thing that Parker is looking forward to in Charlotte is playing alongside countryman Nicolas Batum whom he called “my little brother”. Parker and Batum played together in the French men’s national basketball team which won the Eurobasket title in 2013, finished 3rd in 2015 and 2nd in 2011. Parker was the tournament MVP in 2013 when France had its biggest moment in international basketball.

Then Parker is also excited to play for his idol, Michael Jordan, who owns the Hornets. When Parker was a kid, he played both basketball and soccer but was more inclined to the latter. But each summer, Tony and his family visited his grandparents who lived in Chicago. In 1991, he saw MJ for the first time as the Bulls won their first NBA title. It was then when Parker set a new goal for himself: to play in the NBA. He may not have reached Jordan’s level, but what a career has it been. Now Parker has a chance to close it playing for Jordan.

The Hornets were rumored to be shopping franchise player Kemba Walker who is the team’s starting point guard. And should the Hornets pursue a trade, Parker should keep the team afloat while the Hornets will be looking for their point guard of the future. Although he is no longer the blur that he used to be, Parker is still 36 and may have a couple of productive years left if he is healthy.

If the Hornets decide to keep Walker, then he Parker should be the best mentor to Charlotte’s franchise player. No doubt about Kemba Walker’s ability to score and his passing skills, but Parker’s presence could very much improve Walker’s playmaking abilities. Not to mention TP could provide him with the back-up support he never had in Charlotte. 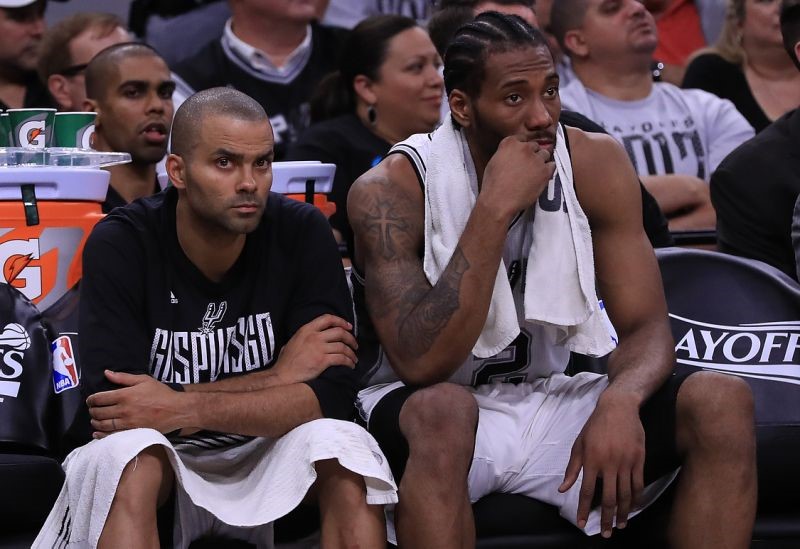 The effect of Parker’s decision to leave may or may not have an effect on the Kawhi Leonard situation. It can be recalled that last season, Parker organized a players-only meeting where everyone tried to clear the air and convince Leonard to return to the Spurs line-up.

Leonard declined, citing he was not yet 100% but a couple of days later, Parker compared his own quadriceps injury to Leonard’s. In his assertion, Parker claimed that his quad injury was “100 times worse” than Leonard’s. Although Leonard never replied to that statement, there were rumors that it added to Leonard’s frustration with the organization.

According to the ESPN’s Adrian Wojnarowski, that was the “last straw” for Leonard. He decided to leave the team and seek outside treatment. Leonard never returned to play for the Spurs during the remainder of the regular season and the playoffs. Instead, he was spotted watching a Dodgers game a few days after the Spurs were eliminated from playoff contention.

For his part, Parker said he had no beef with Leonard whom he even called “the face of the franchise”. Said Parker via Undefeated:

"I have no problem with Kawhi Leonard. We never had an argument. When the journalist asked me if my injury was worse than Kawhi's, I said yes because it was true. But that didn't lessen the significance of his injury. He took over the franchise, and I gave up the torch of the franchise willingly. It's very sad that the media took one quote and made it sound like I didn't want to play with him. He was the face of the franchise."

Although many Spurs fans are deeply saddened with Parker’s departure, some are hopeful that it will in some way change Leonard’s mind about leaving too. Parker may have denied a problem with Leonard but his words and actions in trying to repair damage may have worsened the situation.