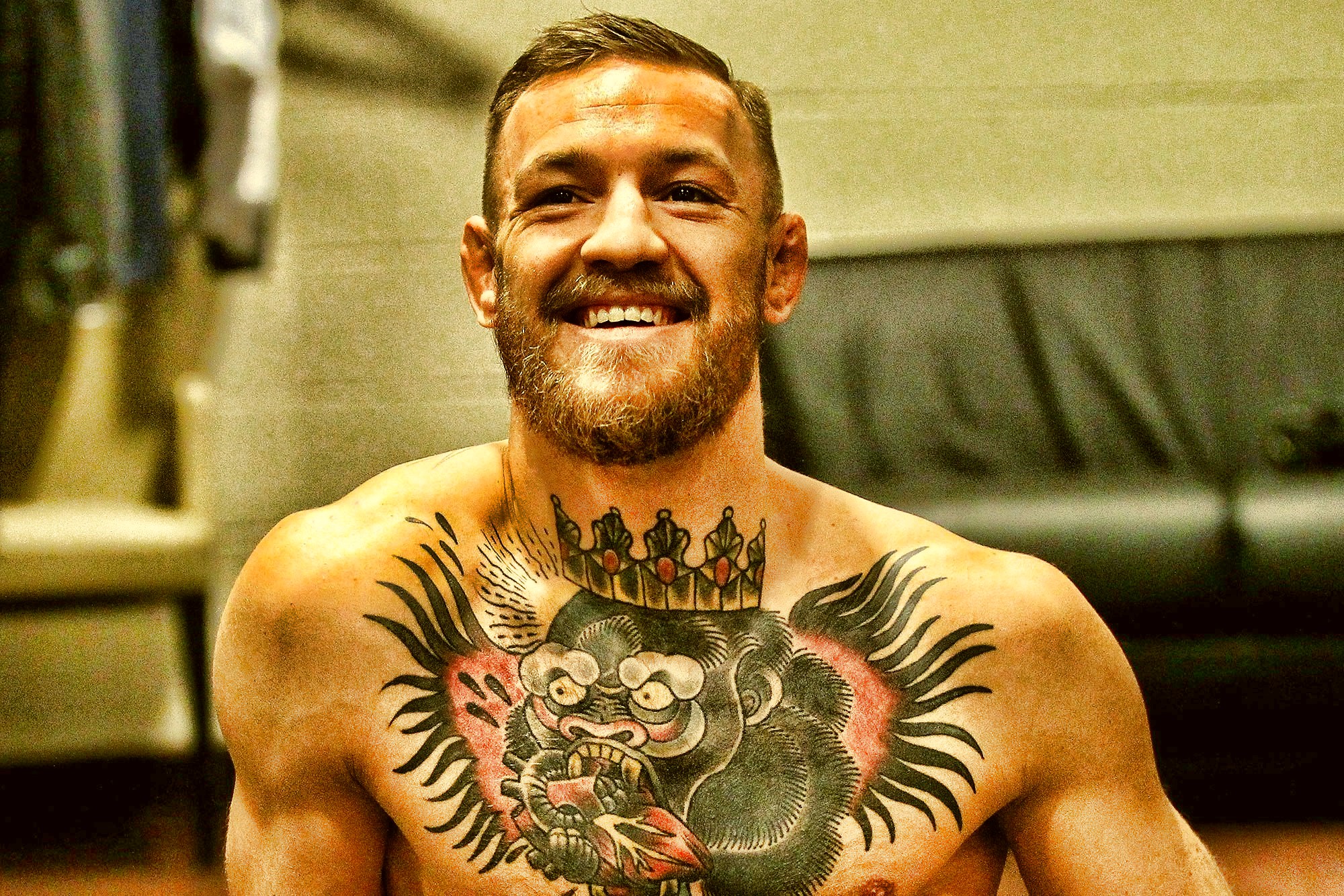 Conor McGregor is the biggest name in Mixed Martial Arts. He became so not only with his Octagon conquests but because of his gift of gab. Not only does McGregor possess a powerful left hand, he also has a sharp tongue.

McGregor captured the imagination of MMA fans with his uncanny striking prowess. With his vaunted left hand, McGregor punched his way to the world title, winning the UFC Featherweight belt with a 13 second annihilation of Jose Aldo.

Then McGregor cemented his legacy with another title winning performance at UFC 205. The brash Irishman knocked out Eddie Alvarez to become the first fighter to hold two world titles at the same time. But instead of defending either UFC belts, McGregor decided to venture into boxing and talked his way to a fight with Floyd Mayweather Jr. McGregor lost to Mayweather but he surely left the boxing ring with a huge bounty, one that he’s been living off since that bout.

With his future already secure, McGregor isn’t in a hurry to return to fighting. But while he’s away, let’s keep the spirit of the Notorious One burning with some of the best lines we’ve heard from him.

Here are the Top 10 best quotes from Conor McGregor: 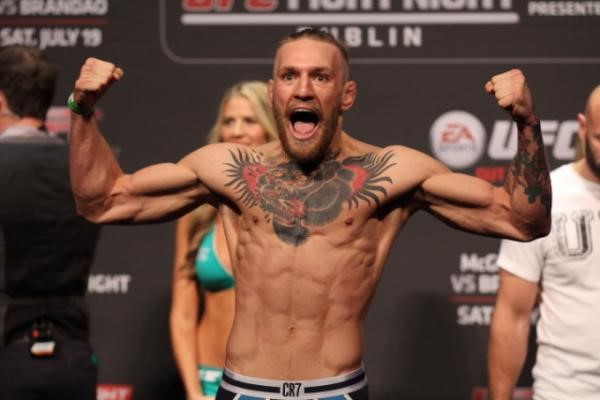 In one of McGregor’s early interviews, the Irishman told Sentana Sports in 2014 about his plans for the future. MMA is as brutal as any fight sport out there so, as any fighter would prefer, he doesn’t want to end up losing some of his faculties. McGregor isn’t just an excellent fighter. He’s also a tremendous businessman. As soon as he became the biggest draw in MMA, he asked for record breaking pays and began picking his fights.

In 2017, After setting a series of record breaking guaranteed paydays, McGregor ventured into boxing and talked his way to a fight with Floyd Mayweather Jr. Sure, McGregor ended up getting stopped late in the fight. But he also ended up walking his way to the tune of at least a $100M in his bank account. He hasn’t fought since then, and is carefully picking his next fight. If there was a Conor McGregor blueprint, this quote was it and McGregor is certainly living it right now. 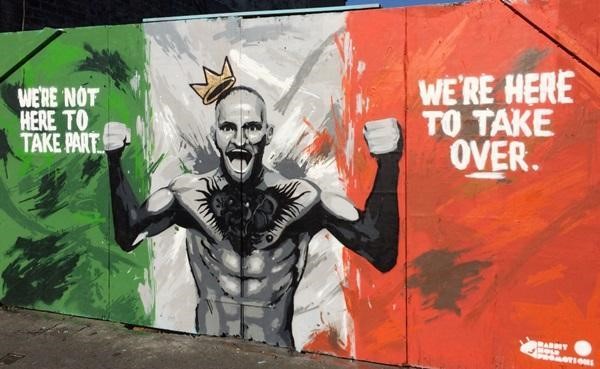 McGregor smothered Diego Brandao in his first ever headliner bout at UFC Fight Night 46 in his hometown of Dublin, Ireland. It’s the event that’s widely regarded as Conor McGregor’s coming out party. On that night, McGregor proved that he didn’t just pack an arena, he packed a powerful left hand.

It was a clean sweep for Irish fighters that night with Patrick Holohan, Cathal Pendred, Neil Seery and Norman Parke also winning their respective fights. A year earlier, McGregor talked about the emergence of Irish fighters in the UFC. He talked about them ruling over the UFC. Many doubted when he first said that. But after UFC Fight Night 46, they were convinced that he was someone special. And it was just the beginning. 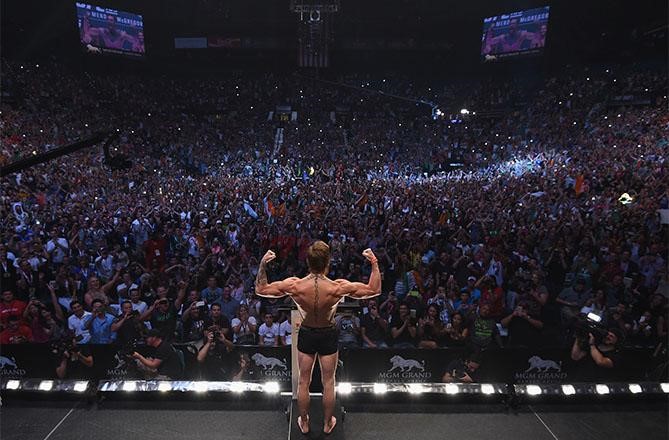 For starters, UFC 194 was the UFC’s biggest event at the MGM and the UFC’s largest event in Las Vegas when it happened. Then of course we know that McGregor’s other title winning fight at UFC 205 broke the Madison Square Garden attendance record set by the legendary Ali-Frazier bout. 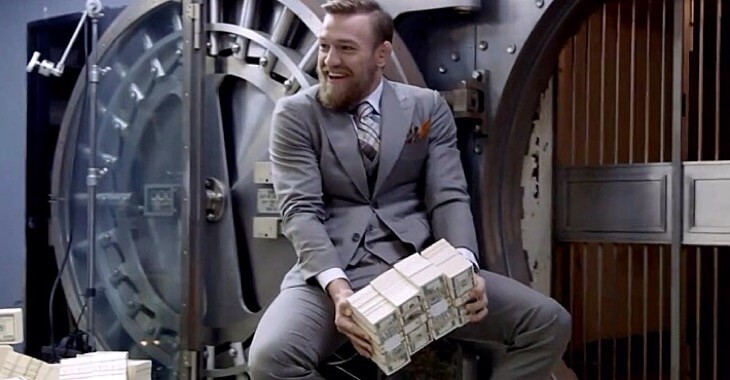 Aside from being the most called out fighter in the UFC, Conor McGregor is one of the more hated fighters on the UFC roster. That’s because the Irishman loves to engage his opponents in trash talking. But McGregor doesn’t just talk his talk to badmouth the opposition, he does so to sell fights. And as he said, everyone can hate him for so long as Mr. Benjamin Franklin loves him.

What makes Conor McGregor what he is isn’t just his striking prowess and natural punching power. But it’s also the way he hypes up his fights with his pre-fight talk. It’s nothing personal to him but if everyone hates him for that, he doesn’t give a damn. It’s the bottom line figure that really matters to Mr. McGregor. 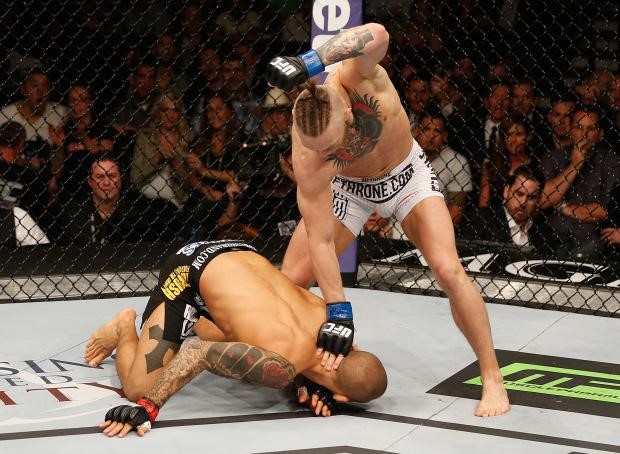 It’s one thing to knock people out. It’s another to pick the round which you are going to do so. Yes, he’s always been known as the Notorious One but in his early conquests, Conor McGregor was known as Mystic Mac for his ability to predict the outcome of his fights ( and outline his UFC future )

Well, the outcome was easy to predict because he was just knocking people out. But from Poirier, Siver, Mendes and Aldo, he was picking the rounds and which shots he would end the fight with. Some people felt he was just lucky with his predictions but in a way, McGregor used his visions as his fight plan and then actualized them. 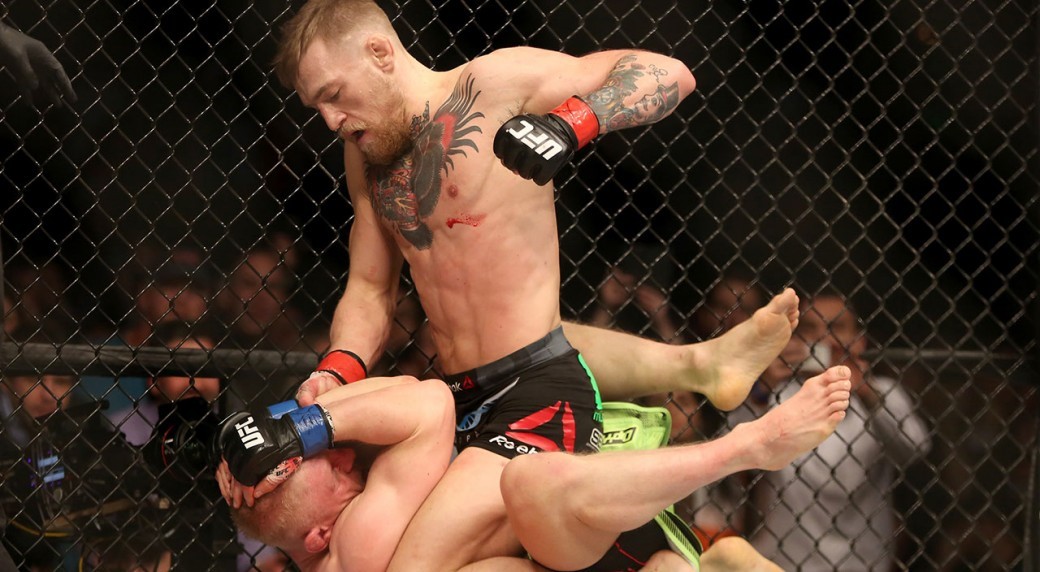 Conor McGregor has never been short of confidence in his abilities. As we said earlier, he was called Mystic Mac for picking the rounds where he will end fights and picking the shots he will end those fights with. But whether in victory or defeat, he’s always been a gracious man.

We’ve seen McGregor lose to Nate Diaz and to Floyd Mayweather Jr ( in boxing ). But never did we hear him complain or make any excuses ( like Pacquiao’s injured shoulder ). He takes defeat as graciously as he accepts victory. In victory, he’s never talked bad against his opponents. McGregor’s trash talking always ended when the fight began. 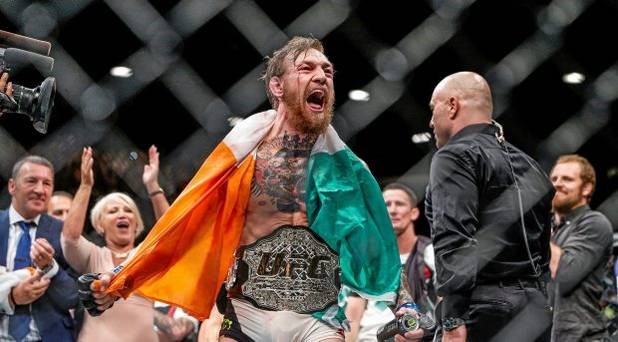 Even we, call it trash talk. Conor McGregor surely has his unique way of drumming up a fight. But for McGregor, it’s all about business. ( it always has been ). He doesn’t talk to hurt the other person’s feelings, he does so to hype up his fights and sell PPV buys.And yes, he’s Irish so he only speaks the truth. 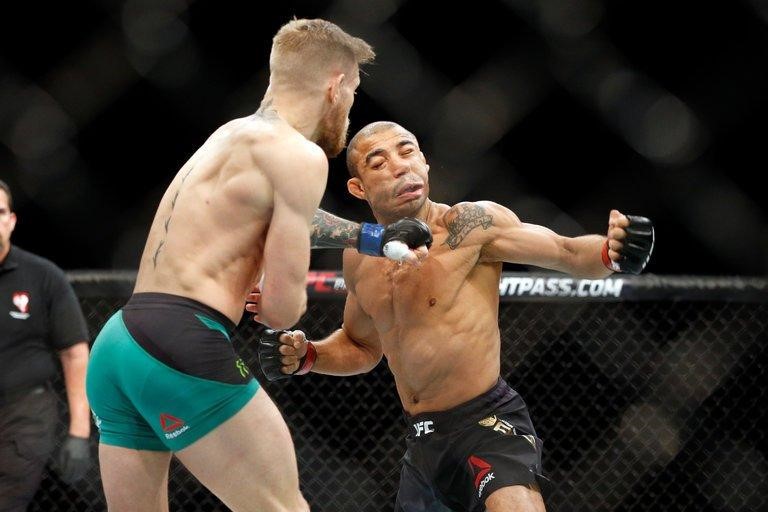 All it took was one punch for Conor McGregor to become UFC Champion. At UFC 194, McGregor wrested the UFC Featherweight title from Jose Aldo with a stunning 13 second knockout. Prior to that fight, Aldo had not lost in over 10 years and was deemed unbeatable at featherweight. But McGregor took everything away from Aldo with a single strike from his vaunted left hand.

Nobody expected the fight to end so fast. Aldo was in his prime. He was fast and powerful. He had the championship experience. But Conor McGregor was confident in his game. He was confident with his punch. And he caught Aldo with the first left hand he threw. That was all she wrote. 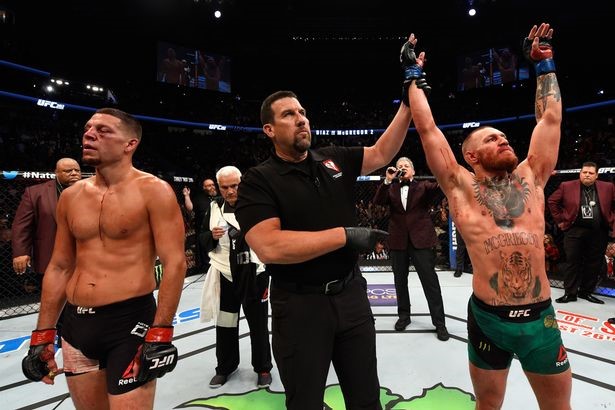 To some, this sounded somewhat sacreligious. But actually, McGregor was only using Jesus as a reference. Conor considers himself a god inside the octagon. Not only does he think he’s the best fighter out there, he knows he is the sport’s biggest draw. Nothing would be possible without Conor McGregor. The sport is what it is today, business-wise, because of him. In that sense, he is a god indeed. 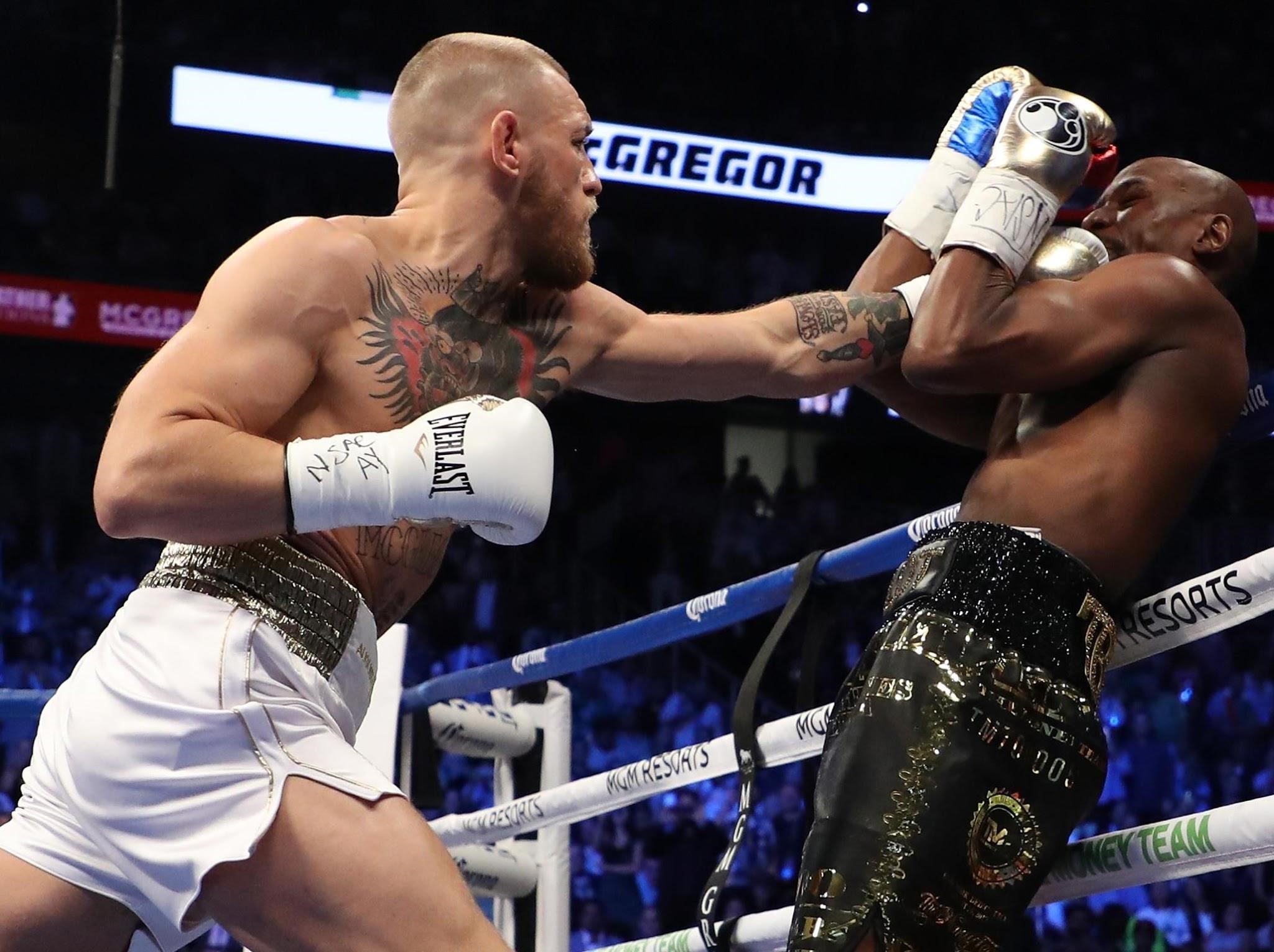 Conor McGregor changed the landscape of MMA. Look, he’s only the third fighter to win world titles in two different weight classes. He’s also the first fighter to win to and hold both belts simultaneously. That puts him in a league all by himself. But while McGregor worked his way to get the featherweight title, he didn’t do so with the lightweight belt.

The UFC has been obsessed with super fights, that is one champion facing another. So when McGregor set out on his mission to become two division world champion, he didn’t have to fight a single featherweight bout to earn a crack at Eddie Alvarez. After winning the featherweight belt, McGregor moved up two weight classes to fight Nate Diaz twice. And then he fought Eddie Alvarez for the lightweight belt. That was considered a shortcut. But if you’re Conor McGregor, there are no rankings to follow. Only money fights and record breaking PPV numbers.