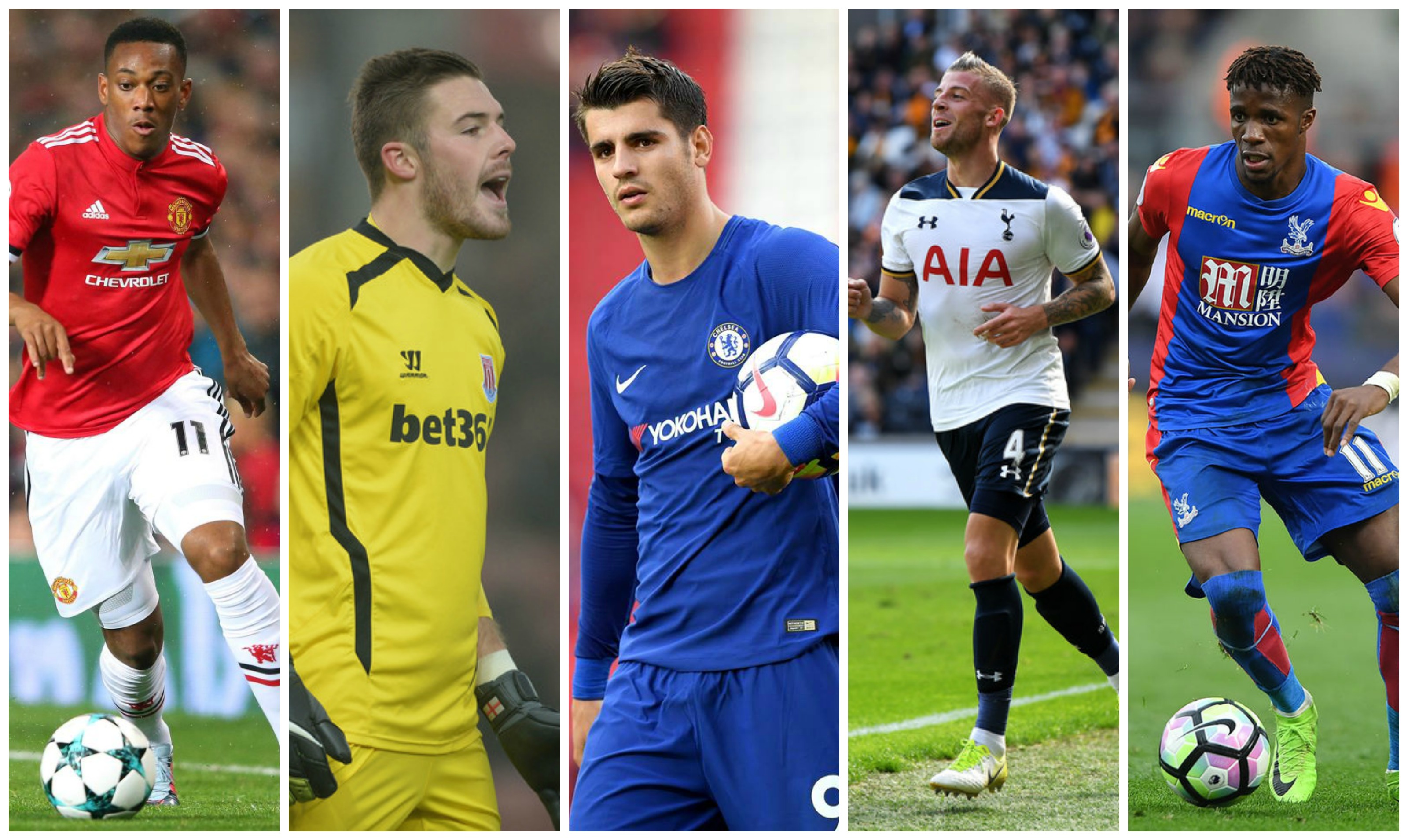 Change is the only constant thing in this world. The same holds for the English Premier League. Transfers are common in the English top-flight, especially that it’s where the best football players not only in the U.K. but in Europe play.

Sure, there are other high-caliber leagues out there. There’s the Spanish La Liga, German Bundesliga, and the French Ligue One. But the Premier League still holds considerable influence throughout the globe. So, what can we expect from this highly competitive league?

The answer to that is easy — transfers. Lots of it.

Here are five of the likeliest Premier League transfers to happen this summer. This will surely shift the balance of power in English football.

Crystal Palace is in a very tough position in the Premier League. They finished in the 11th spot this season, and no one surely wants to play for a team with a standing like that. Well, that’s what Glaziers wingman Wilfried Zaha thinks.

Reports suggest that the 25-year-old is bound to leave Selhurst Park this summer for Manchester United. Zaha has a history with United as he had been Sir Alex Ferguson’s last signed player. He then left United after just playing four games and joined Cardiff City on loan. Zaha joined Palace later after two years.

However, the Red Devils aren’t the only ones interested in the winger. It was also reported that Tottenham, Chelsea, Arsenal, and Manchester United, are also interested in Zaha. Pep Guardiola was even reported to offer a €50 million transfer deal just to get him on board.

Despite this, sports analysts believe that it’s unlikely for the Englishman to join any of these teams due to numerous contract and personal issues.

Zaha is a great dribbler, and that’s what makes him a spectacular performer inside the team’s core. Unfortunately, his current position in Crystal Palace stops him from bringing out his ultimate potential as he’s stuck in the winger position.
What he needs to do is to play in the midfield and position himself at the center-most part of the attacking force. This way, he can easily cut through their opponent’s defense.

Then again, it seems like Roy Hodgson doesn’t have any plans to give his young talent a try. There’s no doubt Zaha feels that he’s treated this way, and he’ll surely head out of Crystal Palace because of it.

The 25-year-old winger has scored nine goals out of his 29 game appearances. It might not be that much, but he’s got the potential to exceed those numbers once he plays for a team that he’s a perfect fit in.

Jose Mourinho’s genius seems like a match for him as he’s into timed attacks, just what Zaha is used to. If the Red Devils manage to get the Crystal Palace player, then they’d have the guts to dethrone rival Man City from the top spot. This would surely be a shocker to anyone who previously underestimated Man United.

No one would think that Anthony Martial would leave Manchester United. After a phenomenal season, the 22-year-old youngster proved that he'd got superstar potential. He scored countless times at the start of the Premier League season — nine goals and five assists to be exact.

This season also proved that he’s a natural fit for the winger position.
But despite his strong perseverance to improve, he still fell to the second team during the winter transfer window to give way for Arsenal star Alexis Sanchez. The winger was reported to have been transferred for a whopping £180 million.

No player wants to be in this situation unless they're not vying for star status. This is why there’s a big possibility that the French will accept any offers that will bring him out of Old Trafford.

Numerous clubs were linked to Martial all-season long, but the likeliest club that he could join appeared to be Juventus. The club already approved the winger’s request to leave, but there are still no details on how much the transfer price will be.

This is a huge failure for Mourinho as his initial plan was to let Sanchez and Martial play side by side. Unfortunately, this wasn’t the case as having the two wingers play together would just wreak havoc on their offense.

The elite wingers had a few moments together, but even those few minutes were plagued with a bunch of performance issues. One good reason why this is happening is because they’re incompatible with one another.

Sanchez prefers playing long balls, while Martial is keener in making short passes. Letting them share the field would just mess up their game plan. So, what’s the best thing to do? Set one free — preferably the one who’s got a lower pedigree.

Nonetheless, the Red Devils will surely feel the effects of Martial’s loss as he made a huge contribution to a lot of their games. One of the most notable ones was when they thrashed Liverpool and put stars such as Mohamed Salah and Sadio Maneh to shame.

Being a goalkeeper is no easy job. He might not shed lots of sweat as compared to other players, but he's got a huge responsibility for the team he’s playing for. Unfortunately, that responsibility is a failed one when looking at Jack Butland’s situation.

The Stoke City goalkeeper had enough of his club’s misfortunes in the Premier League. Being relegated to second-tier football isn’t only dishonoring, but it’s also a major deal breaker if you’re looking to solidify your name as one of the greats.

Because of this, there’s a huge chance that the 25-year-old will leave bet365 stadium and play elsewhere. In fact, reports said that Butland is heading back to the English top-flight as he will join Liverpool this summer.

The English goalkeeper was heavily critical of Stoke City’s previous transfer signings, which according to him, were the main reasons why the Potters were demoted to the Championships.

Arsenal had been linked to acquiring the goalkeeper this summer, but football pundits believe that it’s unlikely to happen as Jurgen Klopp had been looking aggressively for a new goalkeeper to man the middle of Liverpool’s two posts.

What’s great about Butland is that he’s great in blocking long and short strikes alike thanks to his high concentration levels. He’s also fit and has a long arm reach, which is what a great goalkeeper should be.

Liverpool’s Adam Bogdan and Danny Ward also had a less than stunning performance this season, so there’s a possibility that they’re going to have their playing times reduced. Putting Jack Butland on their place will undoubtedly improve Liverpool’s defense and might help bring them one step up the Premier League ladder next season.

Former Real Madrid striker Alvaro Morata had a great start at the beginning of his Chelsea career. However, things have changed after one season as his performance levels went down. Because of this, many believe that he’s again bound to play on another club next season.

The 25-year-old Spaniard scored just three goals out of his 20 appearances in 2018, which is a pretty bad thing considering that most of the Blues offense depends on him as he is the leading striker.

Him performing badly had a direct effect on their campaign this season, with most pundits believing that it is the reason why Chelsea finished the season at the fifth spot. Reports suggest that Juventus is willing to re-sign the striker this summer. If ever this happens, then the possibility of him playing for Juventus would increase knowing that he played in the club from 2014 to 2016.

Former football manager and current sports pundit Paul Merson said in an interview that Morata had lost his confidence in the field, that is why he believes that he will leave Chelsea this coming transfer window.

He then added that the reports of him transferring to Juventus makes perfect sense because his playing style is not suited in the Premier League but in the Spanish La Liga.

There’s no doubt that Morata can finish strongly with his headed attempts. What’s lacking with him is his offside awareness. His play seems like all focused inside his line of sight, which makes the club vulnerable to outside attacks.

Antonio Conte knows this and surely won’t let this continue. Unfortunately, in Morata’s case, it’s clear that he’s not willing to do anything about this issue. So by then, it’d be safe to expect him playing elsewhere.

Mauricio Pochettino is disappointed with how things went for Tottenham Hotspur. The Spurs finished the season in the third spot of the power rankings. It might be good and enough for the other clubs, but not for Tottenham who had been vying for the title for already many years.

Literally speaking, the Spurs are just an inch away from the title, if it were not for their lopsided defense all season long. So who’s to blame? Their defenders, specifically the one in the central defense — Toby Alderweireld.

The Belgian 29-year-old had been reported to leave Wembley stadium as he fell out of favor with manager Pochettino. However, the 46-year-old manager is not to blame as his decision to pull Alderweireld off the starting lineup made sense to give space for the recently signed Davinson Sanchez.

Manchester United is one of the first clubs that expressed their intent to sign Alderweireld, but there’s still no specific details on how much they’re willing to pay, unlike Chelsea who already offered a £45 million bid to the Belgian.

Unfortunately, these possible transfer destinations have a big problem to deal, and that is because the Spurs won’t allow their veteran defender to play for their biggest rivals.

Expect the Premier League to have a major facelift next season. Not only will this shift the balance of power in the English top-flight, but this will also make the league more exciting and thrilling.

Isn’t that what all football fans want?

But then again, we need to take these transfer rumors with a grain of salt. Though they may stand on firm ground, there is still no confirmation that they’re going to push through. Well, they might do in the next few days, so we have to wait and see first.