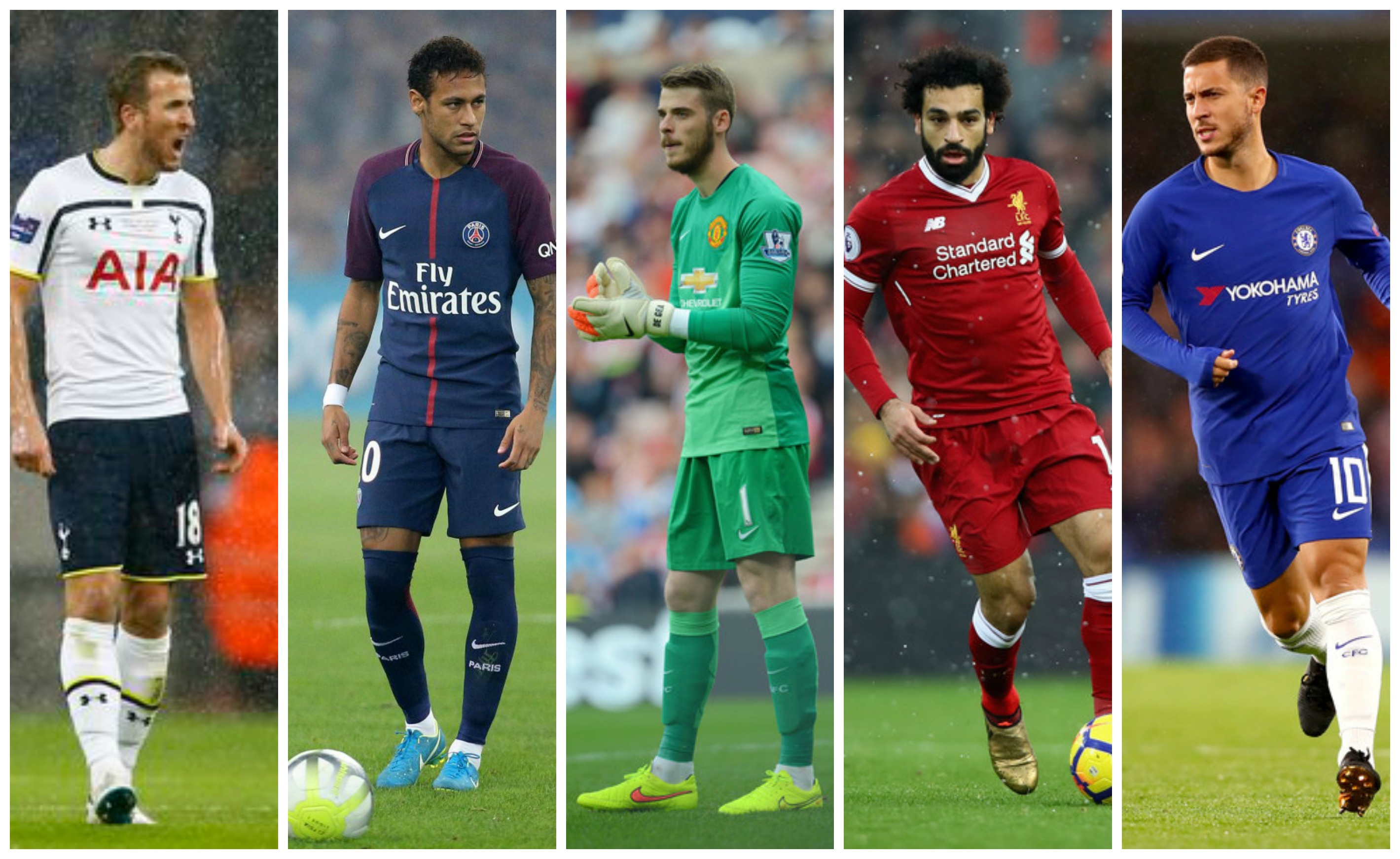 Top 5 Superstars Who Might Join Real Madrid Next Season

Real Madrid had a pretty tough time in this year’s La Liga after finishing the season on a low note. Going no higher than the third spot in the Spanish top-flight is intolerable for a football icon like Zinedine Zidane.

They might have the world’s best football player, Cristiano Ronaldo, but they still fell short of success. Gareth Bale and Sergio Ramos, two of the best elite forwards and defenders in Europe are also at bay, but still, the league’s 2017-18 trophy is not theirs.

So, what better way to do than to spice up their lineup and get more men. Well, that's just what Zidane thought of.

Here are the top five likeliest newcomers to the Bernabeu next season.

First off the list is the world’s most expensive player — Neymar. The Brazilian shook the world after making a €222 million transfer from Barcelona to Paris Saint-Germain last summer. Florentino Perez, the president of Real Madrid, is one of the greatest admirers of his prowess on and off the field.

Perez had been vocal with his interest on Neymar because of his rare talent and marketability. Getting him to the Bernabeu would not only make them a powerhouse, but it’ll also bring them even more international recognition.

It also happens that Perez still doesn’t mind even if Neymar’s transfer fee is going to be a whopping €400 million.

As of now, the Spanish giants are carefully treading over murky waters to gain the attention of the French club. It might be a huge shocker at first because Paris Saint-German paid a record €198 million for the former Barcelona forward last summer.

They surely won’t let him leave that easily.

But what if Neymar himself doesn't want to play for them anymore? They surely can't do anything about it as forcing him to play in the Parc des Princes would just mess up their gameplays. Reports said that the 26-year-old isn't happy in his current team, as well as with the general style of play in the French Ligue One.

With this, it’s very likely for Neymar to welcome any chances of returning to La Liga, preferably in Real Madrid who’s in dire need of an elite forward. Playing with Ronaldo also won’t cause any problems as the two have complementary skills.

The Portuguese star would surely welcome the arrival of Neymar, knowing that he’s got top-notch skills. Not only will Neymar help his striking, but he will also help him set up more solid plays, and in the process, increase their chances of making it to the finals next year.

Reports also said that Real originally planned of getting Neymar in 2019, but the growing distance between the Brazilian and PSG shows that now is the perfect time to make such a move. Unfortunately, Neymar’s contract still doesn’t have any release clause, which might hamper any transfer progress made by Los Blancos.

Neymar recently sustained a foot injury after it was fractured during their game against Marseille in late February. However, his recovery took faster than expected and he’s now back in training at PSG’s grounds.

Second in the list of potential Real Madrid newcomers is the Egyptian phenomenon, Mohamed Salah. The 25-year-old is arguably the best Arab football player — a fact that Zedine and crew dearly knows.

Unfortunately, his skyrocketing to fame also cost the clubs a lot as this would mean a drastic increase in his wage demands. In fact, reports in Spain said that the main barrier to him playing at the Bernabeu is his high salary bargains.

Salah had been in exceptionally great form throughout the season having netted 43 goals in multiple competitions. You surely want a big pay check if you made that many goals.

Another reason, according to Don Balon, is Cristiano Ronaldo and Sergio Ramos’ disapproval of having Salah in the club. The Egyptian is reported to demand a whopping €15 million annual salary, should he play at Bernabeu.

Then there’s his strife with Liverpool boss Jurgen Klopp who heavily criticized him following his outlandish dive which led to their 1-0 defeat at the hands of Chelsea. During the post-game interview, Klopp said that he was disappointed with Salah’s move as it negatively impacted the other players’ performance all-game-long.

And it wasn’t the only time that Salah fell out of Klopps’ favor. The 50-year-old German said that similar situations like this have already happened in the past, and that’s not a good sign of a well-adapted team player.

Mohamad Salah surely doesn't want to continue playing in an environment like this, and a move to Real Madrid could be his way out to play in a team that he deserves.

Manchester United’s elite goalkeeper isn’t happy with their second-spot finish in the Premier League. For David de Gea, being heavily criticized by football fans and enthusiasts is not the way to go if he wants to solidify his legacy.

So what’s the best thing he could do? Well, leave Old Trafford and play for a top-notch club filled with high-caliber players — Real Madrid, perhaps.

Los Blancos had been interested in the Spanish goalkeeper since 2015 but failed to make ends meet due to numerous undisclosed reasons. Spain’s number one goalkeeper won for the fourth time his Man United’s Player of the Year award after being on exceptional form all-season-long.

In an interview, the Spanish sensation said that he wants to win bigger games and titles in a top-notch league. Though the Premier League is the English top-flight, he still isn’t that contented as he wants to prove that he can dominate multiple leagues while he’s still at his prime.

As of now, De Gea’s reaction towards their current situation in England is mostly disappointed as he was seriously aiming for the title. Though a second-place finish is decent, winning the championship trophy was still way better, he said in a statement.

He then added that he, together with his other teammates, play to win trophies and not just get runner-up finishes.

With this, it’s very clear that he wants to play for ultimate success. Well, playing together with Cristiano Ronaldo, Gareth Bale, and Sergio Ramos are sure recipes to league domination.

Though there are no further details as to how much his salary demands are, it’s expected that he’ll charge an expensive one. After all, he deserves it as he’s the best Spanish goalkeeper, right?

Then there’s England’s rising star, Harry Kane. The 24-year-old striker had been doing great this season as he pushed the struggling Tottenham Hotspur all the way to the fourth spot of the Premier League.

Unfortunately, he’s still one of the most underrated players in the league. He’s got the skills and the talent, but the club he’s playing for does no good in making him world-famous. According to sports analysts, the only option for him, if he wants to become one, is to transfer to a better-achieving club.

It turns out that Real Madrid is on the lookout for a young striker who can be relied on in clutch situations. Daniel Levy’s frank negotiating style could be a barrier to the transfer progress, but Kane’s physical condition and likability make him a much-needed addition to Los Blancos.

Kane scored a record 37 goals this season on multiple competitions, which is one of the reasons why he’s going to be on the radar of the Spanish giants. According to reports, the Spurs want a €175 million transfer fee for their star player.

That might be out of Real Madrid's budget at first glance, but in knowing that Zidane plans to set Gareth Bale free and swap him for Kane, it’s safe to assume that the transfer price will be considerably lowered.

Los Blancos are 15 points away from arch-nemesis Barcelona, a fact that remains unacceptable for the high-achieving club. They need to get a high-caliber player who can help them with their finishes, through balls, and headed attempts to avoid the same situation from happening next season.

Though he’s short of defensive capabilities, Marco Vieira and Dani Carvajal’s prowess in securing their lines will make up for it.

Harry Kane then needs to use the upcoming World Cup as his staging ground to attract the top clubs in Europe. For sure, it’ll be his key to demand a high wage offer from the Spanish giants, that is, if he excels.

Eden Hazard; Antonio Conte’s go-to man for their midfield’s attacks and the elite midfielder who had been Chelsea’s hero after they hung by a thread in the Premier League’s top five.

For some, Chelsea’s season finish is a good one, but for him, it’s unacceptable.
This might be the reason why he would want to leave Stamford and play elsewhere.

Real Madrid is one of the likeliest destinations he’ll head to. And he’s still on Zidane’s radar even though his performance with the Blues is just good and not that spectacular. Now that the World Cup is fast approaching, it would make sense for the Belgian to bring out his best so that he’ll capture the hearts of the men in Bernabeu.

Hazard had been a mainstay in Chelsea’s attacks since he joined the club six years ago. With 300 appearances, he sure had gained enough experience to play with the best and to go head-to-head with the giants.

He also won two Premier League titles and a couple of individual achievements throughout his stunning ten-year career.

Zinedine Zidane wants a guy like that to play for him. He’s at his prime, he’s humble, and he has the makings of a superstar despite him being already 27-years-old. Having him at the Bernabeu would surely bolster their counter-attacks, inside cuts, and tackles — just what Los Blancos need to counteract Messi and co.

Now is also the perfect time for Hazard to leave Chelsea because Real Madrid is in dire need of a natural midfielder who can also play as forward. If he doesn't leave Stamford Bridge now, then there's a huge chance that he's going to stay in Chelsea for the remainder of his career, and he sure doesn't want that.

He's 27, and at the peak of his game, so the best choice for him is to head to Bernabeu and play in the Spanish top-flight.

Real Madrid’s chances of making it big next season will skyrocket once the aforementioned players play for Zedine. There’s no doubt that Cristiano Ronaldo, Sergio Ramos, Karim Benzema, and Keylor Navas will lead the Los Blancos frontline to La Liga bliss.

And though some of their brethren are going to leave, newcomers will also join them.

Let’s just hope that they stay healthy and at remain in prime condition once the summer break is through. When they do, then Real Madrid will regain their former glory.