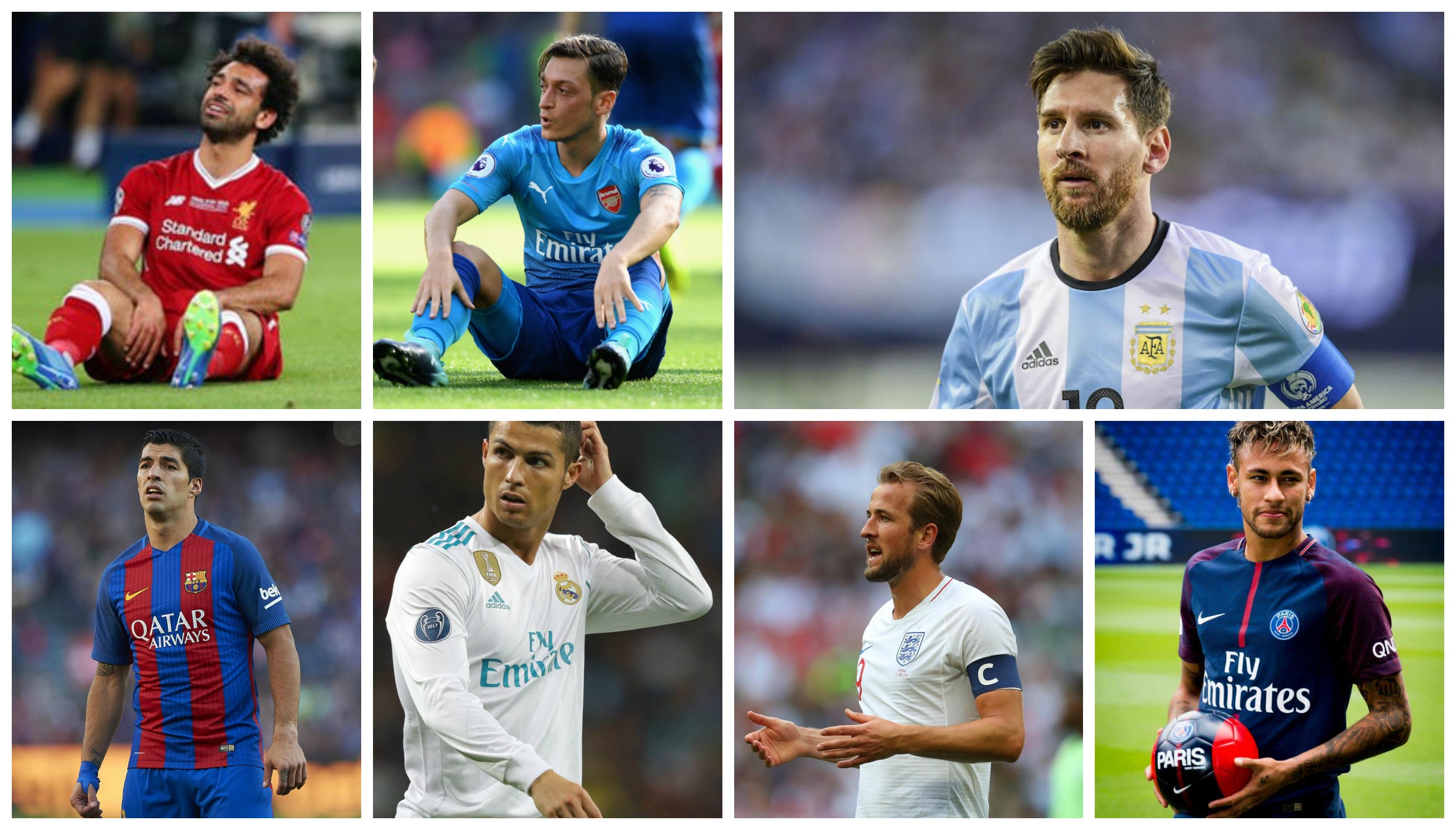 Top Players to Watch Out in the World Cup

The grandest football competition in the world will kickstart in just a few days, and along with it are the hopes of millions of fans around the world. Not only will this be the arena where the best football players play, but this will also be the perfect place for agents to search for their next biggest transfers for the next season.

For sure, the 2018 World Cup will be a staging ground for the sport’s future.
Over its decades of history, this year’s World Cup, which will be held in Moscow, Russia, will feature the brightest stars in football. This will also serve as an ideal exposure for the youngsters wishing to showcase their skills and talent to the world.

However, this won’t be an easy task as competitiveness will be sky-high during the games.

Germany, the reigning champions, are the favorites to dominate the World Cup, but things have changed greatly both in their arsenal and their management. The overall environment of the sport has also experienced a shift as newcomers have slowly replaced the aging legends.

With this, it’d be safe to expect that the tide of power in the contest is changing constantly.

Brazil, who has dominated the World Cup numerous times is also looking to take this year’s trophy. Some even believe that the Brazilians are going to topple the Germans this time around.

There’s also Spain and Argentina who are fiery as ever to win the contest, as well as the dark horses Belgium who are regarded as having their golden generation. There are also teams like Switzerland and Egypt who have talented players that can lead them to greatness.

Mohamed Salah had experienced the best season of his career after scoring an unbelievable 46 goals in multiple competitions throughout the year. He’s also had one of the best Premier League seasons after helping Liverpool make it to the fourth spot and onto the Champions League final against Real Madrid.

Though he failed on those two occasions, that's not really a big problem knowing that he showed his full potential during those games. Because of this, he got nicknamed as the Egyptian King due to his remarkable performance this season, despite him being just 25 years old.

It’s also worth noting that he made 14 assists this year, which is another proof that he’s a team player.

If ever he continues to play this way in the World Cup, then there would be no doubt that Egypt is one contender to look out for. Unfortunately, he sustained an injury during their 3-1 loss against Real Madrid in the Champions League.

But even that wasn’t enough to put him out of the Egyptian squad as he was still included by coach Hector Cuper. That, however, isn’t surprising as Salah is undeniably the best Egyptian footballer to date.

Harry Kane, the 24-year-old Brit who impressed the world after dominating the Premier League in multiple ways.

Bagging 30 goals out of his 35 games is nothing short of spectacular as he led Tottenham Hotspur to the verge of English top-flight supremacy.

Though the farthest they’ve been is the third place, that alone is an impressive feat for Kane especially that he still lacks deep experience in these game scenarios. He even topped England’s goal scoring charts, albeit in the second spot, as the Egyptian Reds Mo Salah took the first spot.

For sure, Kane will be a huge driving force for the Three Lions in Russia. But then again, it's not all about him as the forward is known to depend heavily on his teammates. If this was the case, then he would need the full help and support of the other England players.

Fortunately, there’s Raheem Sterling, Dele Alli, and Jami Vardy, who can back him up. Gareth Southgate’s gameplay strategies will also be on full display once Kane steps foot on the field, knowing that they have the same game styles.

The success of the German squad in the 2014 World Cup was made possible thanks to Mesut Ozil’s assisting genius. Considered to be the assist king, Ozil continued to showcase his fiery passion for the game through his superior assisting skills.

And it’s not just about skills for him as he’s also got a lot of experience tucked under his belt. The Bundesliga alone is the ideal avenue for him to master the sport, and his truckload of international gaming experience sure molded him into becoming more of a solid midfielder.

However, some of his games in the Premier League aren’t very impressive as he was always missing in the crucial moments. Nonetheless, that didn’t hamper him to make it into Germany’s squad, perhaps due to his experience from the previous World Cup.

He’s also best known for his natural talent of finding assists and making way for attacking lines to push through. Those, perhaps, might be his strongpoints once he sets foot in Russia in a few weeks.

It’s also worth noting that Joachim Low knows how Ozil plays. His game strategies complement Ozil’s aggressive, yet well-timed plays. So, with that alone, we can expect the German midfielder to thrive, along with his teammates, of course.

Then here’s the 31-year-old Luis Suarez who led Uruguay to the brink of global domination in the 2010 World Cup. It might be eight long years ago, but the experience is keenly intact the forward’s mind and skills.

If Uruguay has any hopes of getting this year’s trophy, then they’ve got no other choice than to rely on Suarez as he’s the only superstar they’ve got. However, this should not be seen as an understatement to the team’s scoring capabilities as they’ve also got elite strikers in the likes of Edinson Cavani and Cristhian Stuani.

This means that he also needs the help of his teammates as he can’t carry the entire team by himself. His finishing, crossing, ball handling, and through balls will be tested when the World Cup kicks in.

But there’s no need to worry about that as he knows the ins and outs of the sport knowing that he’s got a decade of playing experience. Oscar Tabarez also knows how to deal with the Barca forward, so we can say for sure that he’s going to have a great time.

Who would forget Neymar, the Barca striker who made record after accepting a €200 million deal transfer to Paris Saint-Germain. Millions were shocked to know that Barcelona’s forward will no longer play in Camp Nou but in Parc des Princes.

Nonetheless, the transfer proved to be a game changer for him as he made 28 goals out of his 29 game appearances in the Ligue One. Unfortunately, there are reports that he’s still struggling to find his rhythm at his new found home.

Because of this, he feels the need to bring out his best as he hasn’t gone full blast yet. Fortunately for the Brazilian team, the World Cup might just be the place where he'll exact his full skills and talent.

Yes, we still haven’t seen the best of Neymar this season, but one thing’s for sure, and that he’s capable of leading the Brazilian squad to global domination. It’s also not just about him as the squad is also laden with numerous talents.

Take for example Philippe Coutinho who can support Neymar with a barrage of assists from the midfield. There’s Roberto Firmino who can go side by side Neymar on attacks. Gabriel Jesus can also man the offense while Marcelo Vieira and Thiago Silva secure their defensive lines.

Neymar got all the resources needed to lead Brazil to another World Cup title, so there’s going to be no excuses for him.

Lionel Messi, considered as the best footballer of today’s generation together with Cristiano Ronaldo, will once again showcase his football prowess in the global arena this coming World Cup.

But can he shine again? Most likely yes.

He’s had a spectacular season lately, having led Barcelona to win the Spanish La Liga and Copa del Rey. Though they might have missed the Champions League, he still contributed a lot to Barcelona’s offense and gameplays as he manned almost all roles.

The previous season was the year when he shined the most, and with that, it'd be safe to expect him to go full throttle in Russia. Messi bagged 50 out of his 57 game appearances in multiple competitions this season, which is another proof that he's fully geared up for the global contest.

Anyways, he’s got a lot of experience playing with Argentina in the previous World Cups, despite some of them being total thrashes.

This World Cup will also be his last shot to becoming the best footballer of all-time, knowing that he’s already 30-years-old. Argentina’s defeat at the hands of the Germans during the 2014 World Cup will surely add pressure on the forward’s shoulders as he needs to make up for it this time around.

Nonetheless, the Argentinian team knows what to improve on, having experienced the frustrating defeat firsthand four years ago. Messi will be supported by fellow forwards Paulo Dybala, Gonzalo Higuain, and Cristian Pavon, who are all known to be great contributors to the offensive end.

This is a great thing for Messi as the three have lots of experience in international games. Javier Mascherano and Angel di Maria will also secure Messi’s back as they take care of defense as well as ensure that the striker gets assists.

With this, one can see that Argentina has some reckoning to do. This time, it's going to be against the giants. And with that, it can be expected that Messi is going to have an easier time competing for this time around.

Forgetting Cristiano Ronaldo on any article that talks about the biggest football players are unacceptable that's why he's included in this list. But don't get us wrong, as the Portuguese forward is also among the players who got an amazing season, which makes him geared up for the World Cup.

First off, Ronaldo won the UEFA Champions League after Real Madrid defeated Liverpool 3-1. That alone was a huge achievement for him as the league was the biggest and most important contest in Europe. That was a confidence boost for him for this World Cup.

Ronaldo is also aging, and this World Cup might be his last. He's already 33-years-old, and his pace and agility are slowly declining. But there's no need to worry about that as he's got a ton of support from the Portuguese squad, despite their chances being very low.

Ronaldo made 45 goals out of his 46 game appearances — another hint that he’s up for greatness in Russia. Inside cuts, counter attacks, and tackle hesitation will surely be a big help to the Portuguese squad, that is, if the other teams won’t gear up for those strengths.

Will any of these players make it big in Kiev? Probably yes. But then again, the sport of football is like a ball; anything can happen. We just have to wait and see how these folks turn out in the world's grandest football arena, that is the World Cup.