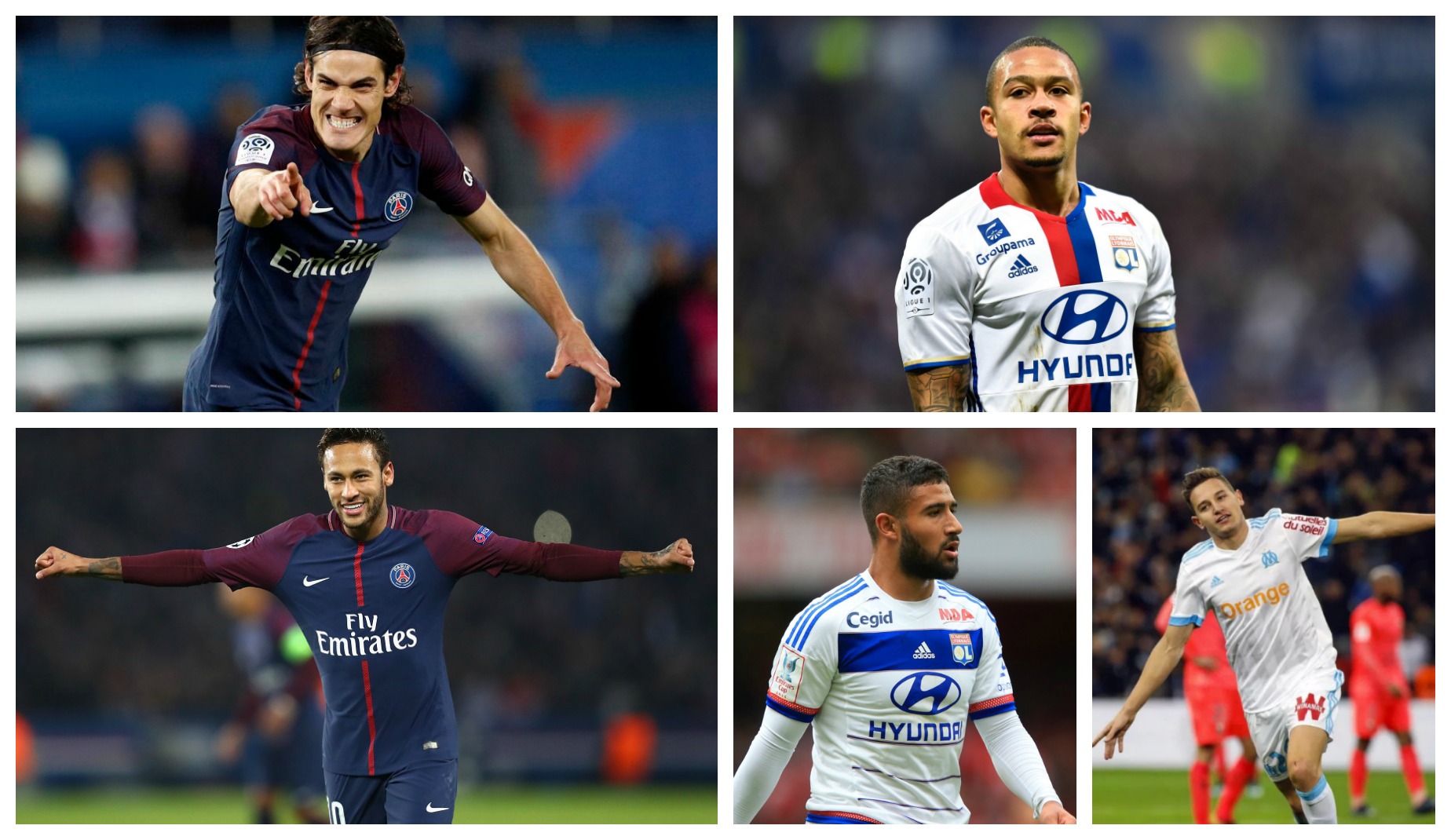 The French Ligue One is finally through with Paris Saint-Germain dominating the scene.

It’s the Parisians’ year this season, but the spotlight doesn’t belong solely to them. There are countless others who have exceeded the expectations of their peers and critics alike — the top scorers, so to speak.

This season had been a grueling one for all players. Jaw-dropping transfer deals, heart-wrenching injuries, and a barrage of numerous on-and-off-field issues have made this year's Ligue One a thrilling and exciting one.

Yet, the elites still managed to go through all these.

So, who are they? Well, continue reading to find out.

Paris Saint-Germain striker midfielder Edinson Cavani had an excellent run this season after scoring a total of 28 goals and contributing six assists to Unai Emery’s side. He’s been on peak condition all-season long as his finishes, long shots, and headed attempts were all on point.

But all these weren’t due to his prowess in the field, but also thanks to his mates at Parc des Princes. There’s Kylian Mbappe and Adrien Rabiot at the forward and midfield positions, both of them being supportive of Cavani’s offensive onslaughts.

Because of this, Cavani became a hot topic for transfers due to his spectacular showcase of talent this season. One of these rumors was his possible transfer to Atletico Madrid that finished second in this year’s Spanish La Liga. However, Cavani denied such claims during a recent interview, saying that his future lies in Parc des Princes.

The 31-year-old specifically said that he intends to spend the rest of his career with Paris Saint-Germain, even if Unai Emery is leaving the club. The Uruguayan also said that it had been a great year, and expects that more similar seasons like this year will come.

Cavani also stated that winning four consecutive Coup de France titles is a huge accomplishment not only for him but the entire club as well.

With this, it's safe to say that Cavani’s best career decision would be to stay in PSG, which is currently the best club in France.

Speaking of Emery’s departure, Cavani believes that the Spanish manager should be given due praise for his many contributions to PSG, especially that he gave the club a number of Ligue One titles.

Meanwhile, there’s the newcomer superstar, Neymar, who joined PSG for a whopping £190 million transfer deal. Expectations on him run high as he’s considered as one of the best forwards in the sport.

Unfortunately, he's reported to be in strife with fellow teammate Cavani after their mid-match quarrel on their matchup against Lyon last September. But things have cooled down lately, probably because of the Uruguayan’s top scoring achievement?

The 25-year-old Frenchman Florian Thauvin had exceeded the expectations of many after becoming the player to have scored the second-most number of goals this season. Making 22 goals and 11 assists this season, Thauvin showed that he’s got what it takes to become Marseille’s captain in the future, that is, if he stays with Les Olympiens.

He’s rated with a high overall rating of 7.93, which is another sign that he’s got the makings of the next Cristiano Ronaldo or Lionel Messi. In fact, his rating makes him the first player to reach suchfigures in just 20 Ligue One appearances in a single season.

His 117 successful dribbles also make him the second-best Frenchman to achieve such a feat. His dribbling, long shots, and passing were on full display all-season long. Most sports analysts believe that this is one of the reasons why Rudi Garcia gave him more playing time this year.

Maxime Lopez and Dimitri Payet also had a huge contribution to Thauvin’s success this season, thanks to their midfield expertise.
Also, Thauvin’s newly formed connection with Valere Germain proved to be a huge determinant of his superior attacks. In fact, five out of the 11 assists coming from Germain were all finished with a score. This, then again, made the duo as one of the best assist-to-goal scorer combos in the league.

These are huge achievements, not only to his club but to his international career as well, as it was his key to landing a spot in France's World Cup squad this summer. Marseille President Jacques-Henri Eyraud even firmly stated that they wouldn't allow Thauvin to transfer this summer, due to his value to the club.

Indeed, the 2017-18 Ligue One had been Thauvin’s finest campaign to date.

Neymar, the 26-year-old Brazilian superstar Neymar who shocked the world with a ground breaking £190 million transfer to Parc des Princes during last summer’s transfer window. Having scored 19 goals and 13 assists out of just 20 games, one can easily say that he had speedily found his bearings in his new club.

The forward brought French football to a whole new level as attendance and television figures increased upon his arrival to the French Ligue One. PSG proved to be too strong to abolish throughout the season, of course, thanks to Neymar’s seemingly unending barrage of skill and talent.

Rainbow flicks, nutmegs, and no look passes were just some of the things he did that wowed the Parisian crowd.

Unfortunately, there were numerous issues surrounding his work ethic and attitude in the club. Nonetheless, these didn’t hamper his onslaught in the French top-flight as he made it to the top three of the league’s top scorers.

He even demoted Lyon’s duo, Memphis Depay and Nabil Fekir who got the fourth and fifth spot of the top scoring list, respectively.
Things seem to have gone smoothly for Neymar and PSG, but it didn't really go that way. Neymar was supposed to be the club's missing link. But what happened instead was pure disaster, albeit it not taking direct effect on their Ligue One performance.

The squad was in shambles, at least in the locker room, with most sports analysts believing that it was due to Neymar’s unwanted entry into the club. Take for example Vitoria Guimaraes who was banned for seven months after kicking one of his fans out of dismay from the Neymar-led game.

Nonetheless, these incidents aren’t direct implications of Neymar being in the club.
Unai Emery will leave the club next season as Thomas Tuchel takes the role of manager. For sure, the German coach will take care of these issues as soon as possible. And when that time comes, there’s no doubt that Neymar can reach greater heights in PSG.

Memphis Depay, the Dutchman who went beyond the expectations of his doubting manager, Bruno Genesio, is one player who needs to be taken seriously. At just 24-years-old, Depay scored 19 goals and contributed 13 assists to Lyon this season.
It was indeed a phenomenal season for him after helping Les Gones finish third. He’s also regarded to have contributed greatly to Lyon being able to qualify for the Champions League next season.

His finishing and set-piece attacks were on full display, as well as his passing and long shots. Depay managed to overcome their opponents' barrage of offensive and defensive plays thanks to his fellow forwards, Bertrand Traore, Mariano, and Houssem Aouar’s presence.

His inside cuts and layoff style of plays are also complementary with Bruno Genesio’s, which is why he was able to go full throttle with the plays he’s most comfortable of.

What’s even more promising is that he tied Neymar and Dimitri Payet in the most number of assists this season — another evidence that he’s going to make it big soon.

And it’s completely normal if he’s made a few lopsided plays this season as he’s just fresh from a transfer from Manchester United. He’s a fairly new guy in Lyon, and that’s the reason why he might not have mastered everything there is to master on Genesio’s club.

With his achievements this season, it’d also be safe to expect that he’ll be linked with a number of European giants this summer transfer window.

Then there is the Frenchman Nabil Fekir who made 18 goals and scored eight assists this season. The Frenchman’s prowess in the midfield and forward positions was on full throttle all season long, thanks to Bruno Genesio’s guidance and his teammates support in the pitch.

His dribbling and long shots enabled Genesio to carry out fluid attacks that easily countered any resistance from enemy lines. His free kicks and layoffs were also on point, with the help of Houssem Auoar, Lucas Tousart, and Bertrand Traore’s consistent support from the midfield and forward lines.

Because of this, Fekir became a highly sought after talent by Europe’s biggest clubs. One of which is Liverpool, which had been reported to be closing in on the midfielder for a £60 million transfer deal.
However, there is still no conclusive evidence that the deal is about to be finished.

Also, Fekir is under contract for Lyon until 2020. With this, it can be said that him transferring to another club is not the way to go, especially that Genesio has a lot of plans in store for Les Gones.

The French League One is indeed the place where some of the world’s best players play. Though it might still be outshined by the English Premier League and the Spanish La Liga, the French top-flight is expected to be on the route to pulling out the aforementioned clubs’ talents and bring them over to France.

In fact, this had already started with Neymar who transferred from Barcelona to Paris Saint-German this season. For sure, more big-time transfers are going to happen next time. When that happens, then there’ll be no stopping the Ligue One from gaining more audience and becoming more popular than ever before.