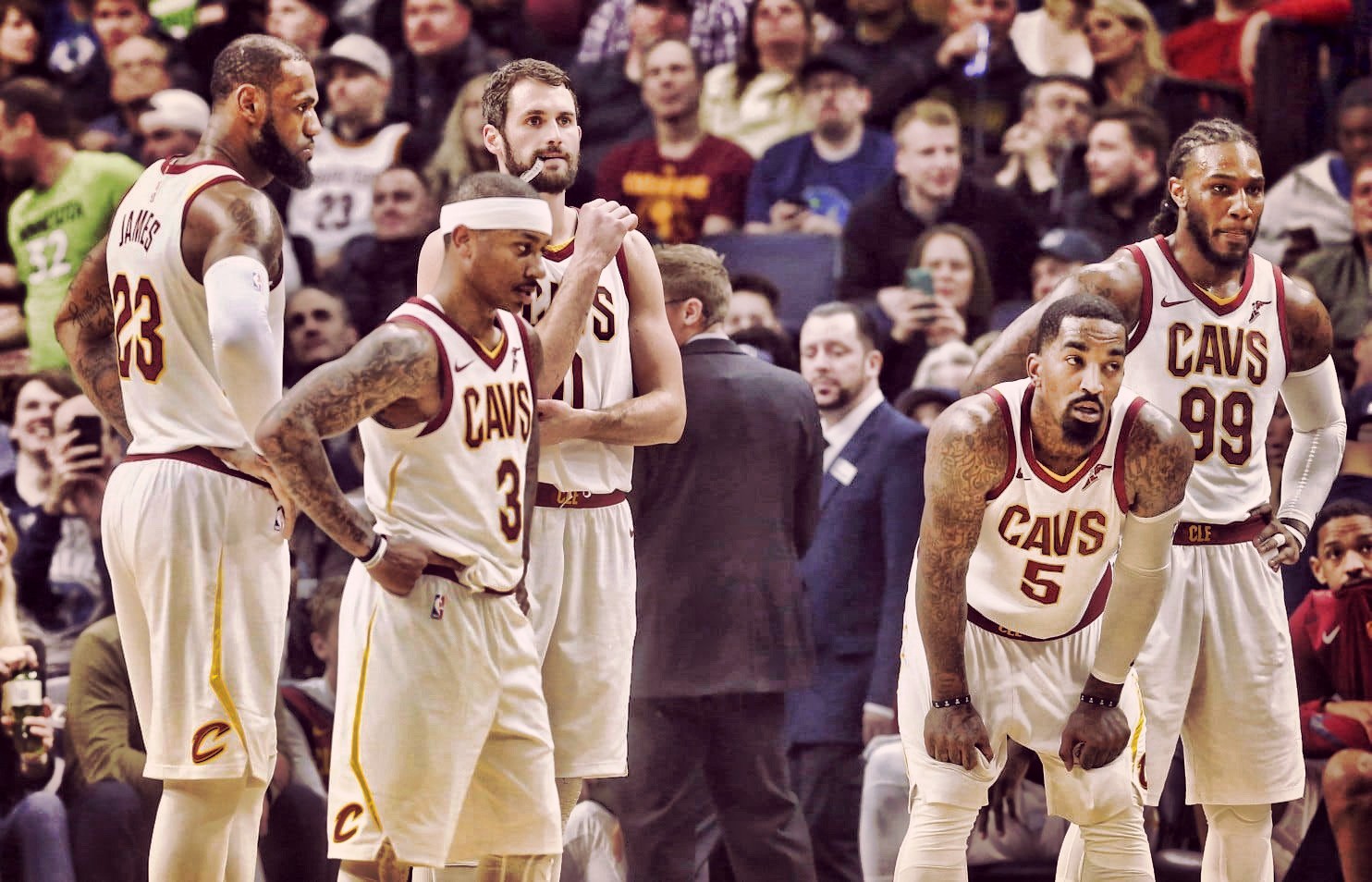 Trades That the Cleveland Cavaliers Can Make To Save Their Season

The Cleveland Cavaliers are no strangers to mid-season slumps. But unlike the ones they’ve been through in past years, the trouble that bothering the team this season is something more serious. According to ESPN’s McMenamin, several prominent players doubt that the problem will resolve by itself through ‘patience and a chance to coalesce when fully healthy’.

Cleveland was 24-9 on December 21 but have been just 3-10 since. The Cavs are currently sitting at #3 in the Eastern Conference and while they are just 5 games behind the 2nd placed Toronto Raptors and 6.5 games behind the conference leading Boston Celtics, the bigger worry is that they are only 3 full games ahead of the current 8th seed Milwaukee Bucks. With the team standings this close, the difference between closing the season strong and gutting out with this troubled team could mean catching up with the Raptors ( and/or Celtics ) or at worse, missing the playoffs this year.

Having said that, there is still time to tweak the roster and help the team break out of their current slump. Despite not having plenty of young players and draft picks to dangle, the Cavs’ roster has several desirable players on board. With the NBA’s trade deadline fast approaching, the Cavs need to make their decision(s) soon.

To determine which players the Cavs should go after, let us first examine what ails the team - on the court at least.

Cleveland’s problems in defense doesn’t have a single and quick fix. But if the Cavs target specific defensive players in trades, then these can be mitigated and the team’s overall defense could improve as the season is about to close. So here are the possible trades that the Cleveland Cavaliers should be looking at to address their defensive woes.

This one’s an easy trade to make - mano e mano. DeAndre Jordan has been the subject of trade rumors for the L.A. Clippers. Since Chris Paul’s departure and lob city’s demise, Jordan’s value to the Clippers has somewhat diminished, especially on the offensive end of the court.

Jordan’s scoring average of 11.8 points per game is his lowest since 2015 but the problem isn’t with opportunities. With his .663 field goal shooting also his lowest over the same period and his field goal attempts per game of 7.3 the highest in his career, getting shots isn’t Jordan’s problems. It’s that he’s not getting the same set-ups that he was used to with CP3.

On the defensive end though, DeAndre is still a monster. His 14.8 rebounds per game ranks 2nd in the league to Andre Drummond. His 5.5 rebounds contested per game ranks second to Drummond and is 2 better than Kevin Love. No one in the current Cavs team can better his 1.0 points per 100 possession allowed around the rim area.

The thing with DJ is that he can opt out of his contract and test the free agency market next summer, making this a possible short term rental for the Cavs. But then if they make a good run in the playoffs, possibly reach the finals, winning might change his mind especially if LeBron stays. Still, this gamble is worth it for the Cavs especially since Kevin Love may also be one of the problems for them outside the court.

If not DeAndre Jordan, then the Cavs can target Andre Drummond. Drummond is similar to Jordan but perhaps only better, defensively this season. Drummond leads the league in rebounds, defensive win shares and defensive box plus.minus. Like Jordan’ he’s a tremendous force around the rim and with his free throw shooting much improved this year, he’s a better threat on offense.

Avery Bradley doesn’t just give the Cavs an extra ball handler and another good three point shooter ( .387 for the season ). He also gives the Cavs the defensive stopper they’ve never had. Bradley is one of the league’s best one on one defenders. Bradley was All-Defensive 1st team in 2016 and All-Defensive 2nd team in 2013.

Getting two defensive stalwarts would be fantastic for the Cavs. But the Pistons might not easily release both Drummond and Bradley to the Cavs even with Kevin Love as the main component of the package. Adding a future 2nd round pick should seal the deal though.

Going big? Go for the Big Spaniard. The troubles of the Memphis Grizzlies are just as well documented as that of the Cavs. We saw head coach David Fizdale got fired and we also heard Marc Gasol saying that he is too old for a losing season. That said, Gasol is perhaps hinting that he wants to play for a playoff team or even a contender.

Enter the Cavs. While Cleveland is struggling in the standings, a good finish could still put them in 2nd place in the East or at least get home court advantage in the first two rounds of the playoffs. We saw them finish 2nd to the Celtics last season but still go all the way to the NBA Finals.

Gasol is a former Defensive Player of the Year winner whose averaging 8.4 rebounds per game and 1.4 blocks per game. That’s a big upgrade from what the production of Tristan Thompson has been this season. Not only is Gasol an excellent defender but he is also both an elite scorer and an elite passer for a big man.

With the OKC Thunder slowly finding rhythm right now, trading Paul George may not be on top of their mind. But considering that George may still be leaving them at the end of the season, then maybe OKC is still thinking they must get something from letting go Victor Oladipo and Domantas Sabonis last summer.

Kevin Love is locked until the 2020 season, making him a more secure asset for the Thunder. Also, Love is the kind of big man that the Thunder have never had in their NBA existence. And in case you’ve forgotten, Love played alongside Russell Westbrook at UCLA in college. Given all these, it’s likely that OKC will love well - Kevin Love.

Paul George is the NBA’s steals leader and one of the premier one on one stoppers in the league. Getting him on board won’t just give the Cavs another legit All-Star player but a defensive leader that can elevate the team’s overall defense. Roberson is a huge bonus as he is also one of the league’s top defenders.
Getting PG13 also gives them a possible replacement if LeBron leaves. Like James, PG’s can be a free agent this summer and while he is said to be thinking L.A., the Cavs can offer him the moon if LeBron leaves.

The rumors of the Cavs trying to work a trade for George Hill are rampant lately. While he may not have the big name of DeAndre Jordan, Paul George or Andre Drummond, George Hill is a veteran presence who can help the Cavs on defense.

Hill has better defense than both Isaiah Thomas and Derrick Rose. His pick and roll defense on the ball handler is in the Top 13% of the league while his defense on spot up shooters in in the top half of the NBA. Aside from his defense, what makes Hill attractive is his vast playoff experience and ability to knock down the three ball.

The question with Hill has been his health and he might be more of a risk than a reward. Still, given that Cleveland is actually pursuing him, then they must know something that we don’t. Or maybe perhaps the Cavs are really to desperate for some kind of change to stop their current bleeding.

Call this wishful thinking, really. But if there is really trouble going on in San Antonio and the Spurs are thinking of dealing the Klaw, then he can be another option for the Cavs.

The only problem with Kawhi is we don’t know whether he’s really healthy or not. Leonard has played in just 9 games this season because of his quad injury. He’s currently out ‘indefinitely’ because that’s what the team doctors suggested and as Pop said, the injury hasn’t healed as expected.

If he’s not healthy, then he’s not a quick fix for the Cavs as he won’t help them this season. But if they make a deep playoff run, who knows if Leonard will be back. And if he can play, well there is no question what he can do. Also, like PG13, getting Leonard will be having a policy if LeBron leaves. Kawhi is a proven franchise player.

If Leonard does want to leave, the Spurs will have plenty of options. Given his injury, those options may be limited. The Cavs can offer an All-Star in Kevin Love, a promising big man in Tristan Thompson and put in another All-Star with an expiring contract in Isaiah Thomas. Not the best offer but given Kawhi’s injury, it may be one of the better offer they will get.

In reality though, fixing the Cavs won’t be easy as getting one or two or even three quality players. But as we said, getting new faces can change the aura in the team. Will the Cavs go for one of these deals? Or are they thinking of other trades as well?