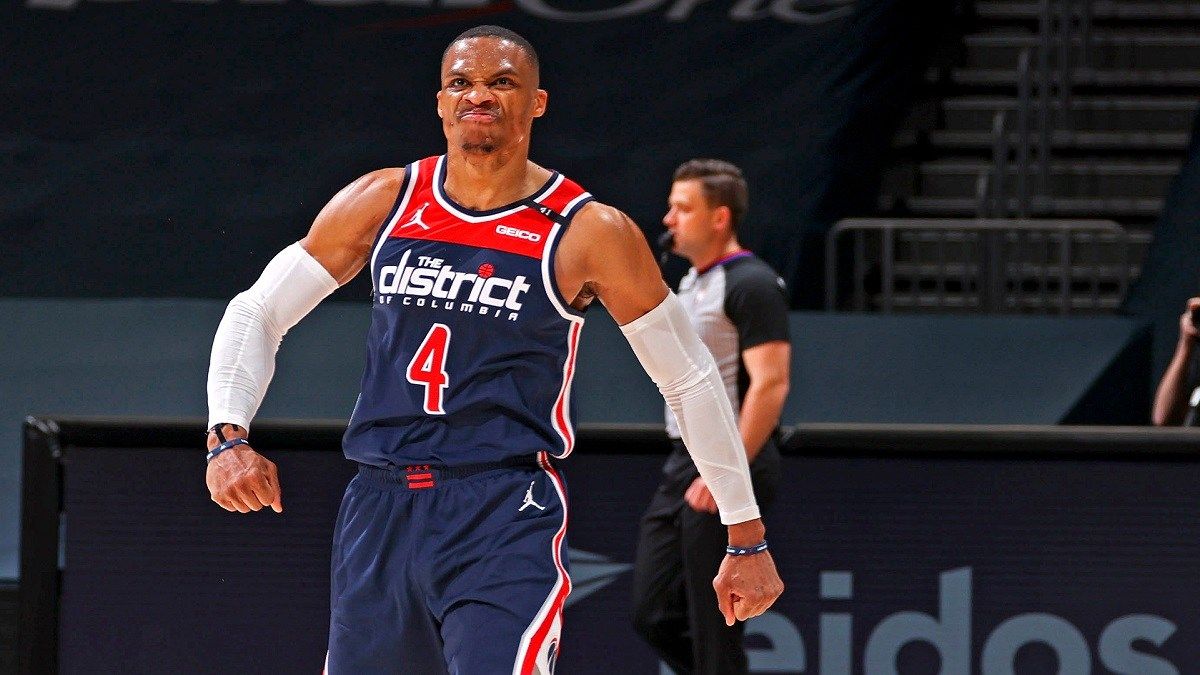 Westbrook on pace for another triple-double season

Russell Westbrook is again having a stellar all-around performance this year. In his first season of playing for the Washington Wizards, Westbrook is already doing almost everything for his new team, something that is very evident in his tremendous stat lines each and every night.

The flamboyant All-Star point guard is currently putting up a stellar all-around stat line of 21.8 points, 11.0 rebounds, 11.0 assists and 1.3 steals per contest. The only downside of his game this season is his low shooting percentages. Westbrook is only shooting a 43% overall clip from the field, including a lowly 31% clip from the three-point line and a measly 62% clip from the free throw line.

Still, Westbrook is having an elite season as a Wizard, and there is no doubt that he is steadily establishing himself as one of the best all-around players that the NBA has seen in its entire history. In an interview with Chase Hughes of NBC Sports Washington, Westbrook said that people do not know how difficult it is to pull off a triple-double stat line each and every night.

Westbrook is adamant in his belief that he is a one of a kind player in NBA history, and that it is not true that all he does is to pad his stat lines. The veteran All-Star guard also emphasized that the fact that he has been tallying triple-doubles at a high rate this month does not take away the high level of difficulty of pulling off that incredible feat.

"I honestly believe there is no player like myself and if people      want to take it for granted, sorry for them. I’m pretty sure if      everybody could do it, they would do it. I honestly make sure I      impact the game in many ways every night; defending, rebounding, passing, whatever it is my team needs from me to win. That’s what I do. I really don’t, honestly, I don’t care what people think about it.

I don’t care what anybody thinks of this whatever they want to      call it ‘stat-padding’ or ‘not useful.’ I think it’s very  interesting that it’s not useful when I’m doing it. It wasn’t  useful when Magic [Johnson] and Oscar [Robertson] and those guys were doing it. Now that I do it and it looks easy, this s---   ain’t easy, though. I’ll tell you that. It ain’t easy. To be able to break that record this month, it’s a blessing. I’m truly, truly blessed and thankful to the man above just for allowing me to go out and play. I don’t take this game lightly. I don’t take my opportunity for granted."

Westbrook’s scoring output of 21.8 points per game this season is actually his lowest scoring average since his second year in the league. The uber-athletic guard started his career with the Oklahoma City Thunder, where he became the face of the franchise for 11 productive years.

He and the Thunder would notch a lot of playoff appearances, and he teamed up with superstar forward Kevin Durant to make it to the 2012 NBA Finals against LeBron James and the Miami Heat. The Thunder unfortunately lost in that Finals match-up, but it is without a doubt that Westbrook was able to introduce himself as one of the best young stars in the NBA during that time.

After his very illustrious stint with the Thunder, Westbrook would then be traded to the Houston Rockets in the summer of 2019 as a vital piece in that blockbuster deal that also saw Chris Paul land in Oklahoma City. Westbrook also had a productive stint with the Rockets, but they fell short in making a deep playoff run last season.

Now in his first year with the Wizards, Westbrook has already broken the team’s franchise record for most triple-double stat lines for a player. That is astounding considering that Westbrook just needed a total of 38 games with the team to come up with that incredible accomplishment.

The daily triple-double talk has died down since 2016. There      isn’t much more to say. Westbrook has reeled off so many at this  point that to some, it’s almost become a knock on his legacy.    He’s done something beyond normalizing the triple-double. It’s    gone the other way. It’s a negative, a criticism, a symbol of the  stat-padder.

Westbrook smiled at questions about them Monday. And he must know more are coming. He has 162 triple-doubles in his career, only 19 short of another Robertson number: the all-time mark, which most  people would have said was one of basketball’s unbreakable records if you’d asked them about it six or seven years ago. It’s  lost that distinction today. Its demise is inevitable. And not just because of Westbrook. The 26-year-old Nikola Jokic already has 53 triple-doubles in his career. The 22-year-old Luka Doncic has 34. Triple-doubles are popping up more than ever. Westbrook was the trendsetter.

On top of all these individual accomplishments, Westbrook is also becoming the driving force of the Wizards’ recent winning streak. Before their disappointing overtime loss to the San Antonio Spurs last Monday, the Wizards actually won eight straight games to launch themselves to the play-in tournament picture in the Eastern Conference standings.

Westbrook and the Wizards won difficult match-ups against the Utah Jazz, the Sacramento Kings, the New Orleans Pelicans, the Detroit Pistons, the Oklahoma City Thunder, the Golden State Warriors and the Cleveland Cavaliers during that impressive eight-game winning streak.

Most importantly, the Wizards are now positioned for the play-in tournament with only eleven games left on their schedule. It is not a coincidence that Westbrook tallied triple-double stat lines in six of those eight wins, which is another testament to how valuable of a work he is putting in for the Wizards’ pursuit of a coveted spot in the East’s play-in tournament after the regular season.

In a separate column that he wrote for The Athletic, Katz detailed out why Westbrook’s calculated aggressiveness as of late has been the driving force of the Wizards’ surprising success. Katz also reiterated that Westbrook’s partnership with star shooting guard Bradley Beal has other opposing teams picking their poison on the defensive end of the floor.

He’s not just getting to the rim because he’s grabbing defensive      rebounds and racing there faster than anyone else. Those kinds of   plays are about straight-line speed. But the acceleration wasn’t there in the early parts of the season, either. Now, he’s no longer running in mud and thus settling for jumpers once the Wizards get into their halfcourt sets.

He’s establishing a deep post position, which a younger version   of himself didn’t prioritize nearly as much. Westbrook’s post-ups used to morph into 10-foot, fadeaway bankers. Now, he uses those moves to muscle to the rim, getting to the line more. He’s been particularly effective in “catch-and-go” instances. Beal can run  pick-and-rolls on one side of the floor as Westbrook’s opponents sag off of as he waits on the wing. If two defenders chase Beal around the screen, he has the nine-time All-Star waiting to catch a pass and speed to the paint.

The Wizards are now sporting a decent record of 27 wins against 34 defeats, which is good enough for the 10th spot in the East standings. They are a game ahead of the 11th-ranked Chicago Bulls, and the 12th-seeded Toronto Raptors are close behind trailing.

The Wizards are doing this without their starting center in Thomas Bryant, who suffered a season-ending knee injury early in the season. Deni Avdija, their versatile rookie forward, sustained a leg injury that will force him to sit out the rest of the year. Those two names may not be star-caliber players, but they definitely play vital roles for the Wizards, and their absence could hurt the Wizards’ chances of booking a ticket to the play-in tournament.

One of the main reasons why they are still able to rack up the wins is their offense. The Wizards are currently ranked 6thin the league with total points per game with 114.9 ppg. They are also in the top half of the NBA in terms of overall field goal percentage. On top of all these, their aggressiveness of always attacking the rim has them ranked second in two-point field goals made per contest.

The Wizards front office did not make any blockbuster moves before the trade deadline last March. Most importantly, they were able to hold on to superstar guard Bradley Beal, who is currently putting up career-high numbers of 31.4 points, 4.8 rebounds, 4.6 assists and 1.2 steals per contest. Even with all the defenders who are focused on him, Beal is still producing highly efficient shooting percentages of a 48% overall clip from the field, a decent 34% clip from beyond the arc, and an excellent 90% clip from the free throw line.

In a separate article written by Katz for The Athletic, Wizards general manager Tommy Sheppard reiterated the team’s plans of always building around Beal’s very unique skill set. Sheppard also provided heaps of praises to his very resilient team, and even said that making the playoffs is the Wizards’ ultimate goal this season.

“Make no mistake: We wanna win. We’re building this thing up for Bradley,” general manager Tommy Sheppard said. “He’s the cornerstone of our franchise. Everything that we do is with that in mind to keep this thing moving and get to sustainable winning every year. The playoffs are always the goal. We don’t retreat from that. But to get there, you have to have depth. You have to have better players. And I think that’s what we’re moving towards.

I think we’ve been a very resilient team,” Sheppard said. “We’ve  taken a lot of punches this year. We jump back up. Now, we got  another opportunity to jump back up with 30 games left. The      second half hasn’t started the way we wanted. Not at all. I think we have games ahead of us to go back, and let’s get back in that groove and show what we can do.”

The Wizards still have eleven games left on their schedule, all of which are very important if they want to make the playoffs this year. They have a huge game coming up against Anthony Davis and the Los Angeles Lakers, before they embark on a two-game road trip against Darius Garland and the Cleveland Cavaliers and Luka Doncic and the Dallas Mavericks.

After those three games, Westbrook and the Wizards will go back home to host Caris LeVert and the visiting Indiana Pacers. After that match-up, the Wizards will then take on a tough five-game road trip, this time against Giannis Antetokounmpo and the powerhouse Milwaukee Bucks, Kyle Lowry and the Toronto Raptors, another game against LeVert and the Pacers, then a mini two-game series against Trae Young and the Atlanta Hawks.

The Wizards will then wrap up their regular season schedule with another game against Garland and the Cavaliers, followed with a vital match-up against Terry Rozier and the young Charlotte Hornets.