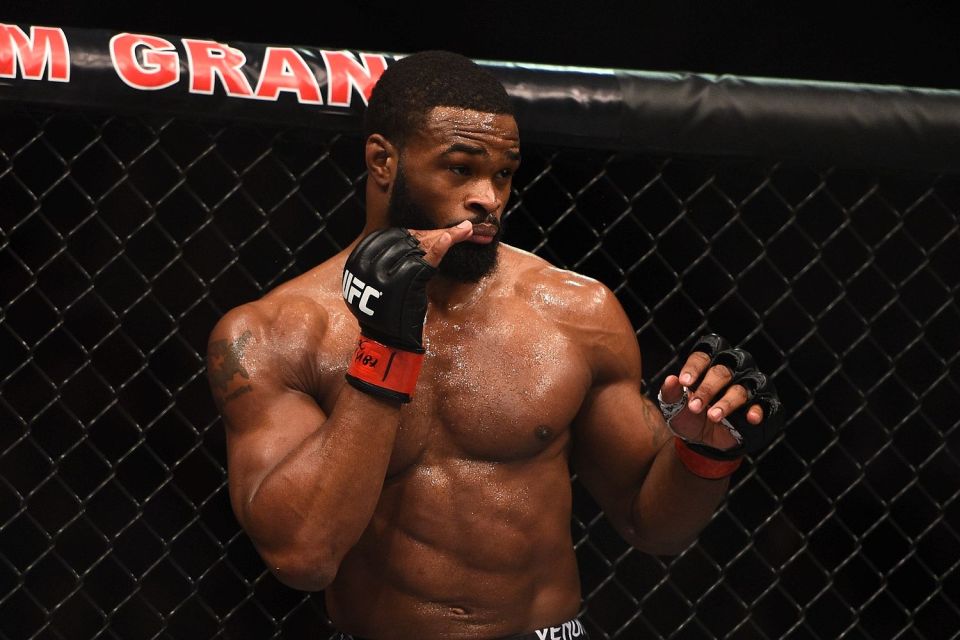 Tyron Woodley Says He is A Better Version Of Georges St. Pierre

Tyron Woodley easily beat Demian Maia at UFC 214’s co-main event to retain the UFC welterweight title. The Chosen One stuffed all of Maia’s 21 takedown attempts en route to winning by unanimous decision. Despite one sided scores of 50-45, 49-46, 49-46, Woodley has come under fire for his conservative and forgettable performance against Maia.

After spending most of the first round trying to fend off Maia’s takedown attempts, Woodley dropped Maia in Round 2 and seemed to get his offense going. But as the rounds went by, the action got fewer and farther between. By the time the fight was over, many fans who bought the PPV were probably snoring in their couches because of Woodley’s approach.

Woodley’s winning effort against Maia not only elicited boos from the crowd at the Honda Center, it drew the ire of a UFC President Dana White who days earlier, promised Woodley the first crack at Georges St. Pierre if he beat Maia.

No Risks, No Rewards

“What did you think about watching the Woodley fight? Listen, when you break a record for the least punches ever thrown in a five-round title fight, and it was about 130 and these guys threw 60 or something like that, I think that sums it up.”

We don’t know about breaking records but what we know is that Woodley and Maia combined for a total of 86 strikes landed ( according to Fightmetric ). For comparison’s sake, Robbie Lawler landed a total of 85 strikes on Donald Cerrone in one of the curtain raisers at UFC 214 and Ruthless did that in two less rounds. Woodley and Maia also combined for a total of 243 strikes thrown in five rounds or 9.72 per minute. In contrast, Lawler’s opponent- Donald Cerrone threw an average of 12.33 strikes per minute. Added White:

"He is an absolute physical specimen. The guy could have finished that fight at any time he wanted to, but he didn’t want to take the risks. You take no risks, you get no rewards.”

The reward was supposed to be a mega-fight with Georges St. Pierre, the former welterweight champion who recently announced his comeback. Before Conor McGregor came, St. Pierre was one of the UFC’s main attractions with many of the UFC’s biggest PPV events ever attached to his name.

After Woodley won the UFC welterweight title against Robbie Lawler at UFC 201, he first demanded a big fight with Nick Diaz or St. Pierre. Instead, Dana White gave him #1 contender Stephen Thompson. And then a rematch with Wonderboy followed after the first bout ended in a draw. A victory over Maia was supposed to give him the big money fight against St. Pierre. White himself said that during the UFC 214 pre-fight conference:

“Listen, the Bisping ship has sailed. If you win on Saturday it’s going to be you, pal.”

Woodley won and he did so convincingly. Heck, he successfully defended all of Demian Maia’s 21 takedown attempts. That was amazing. But that wasn’t what the fans wanted to see. But the Bisping ship is back in business.

Ship Has Sailed Back

White now says that the Bisping ship has sailed back. The next big fight in the UFC would be Michael Bisping vs. Georges St. Pierre. Latest rumors are saying that a deal is in the works for that fight to headline UFC 217 at the Madison Square Garden in New York on November 4, 2017. There is no confirmation yet from the UFC but Dana White has said that it is on:

“That ship (expletive) turned around and sailed back“(Expletive) round five [of Woodley vs. Maia]....It definitely affected this fight, that’s for sure. I know Michael Bisping will show up and fight. No doubt about it.”

Say what you want to say about Michael Bisping but the brash Englishman is one that has never been in a boring fight. He’s not as physically gifted as Woodley nor does he have the same explosiveness nor similar punching power. But unlike Woodley, Bisping leaves everything on the floor when he fights and that’s what matter more to the fans, win or lose. Remember Donald Cerrone has never won a UFC title, yet he is one of the most well-loved fighters in the business.

During the UFC 214 post fight conference, Tyron Woodley claimed that Georges St. Pierre is trying to avoid a fight with him. The Chosen One says that if GSP doesn’t fight him, he should be the greatest welterweight of all-time:

While GSP was one of the top draws in the UFC, he also had a reputation as one of its most boring fighters. Maybe because of the latter, Woodley is correct. He is a better version of Georges St. Pierre because he is more boring than GSP.