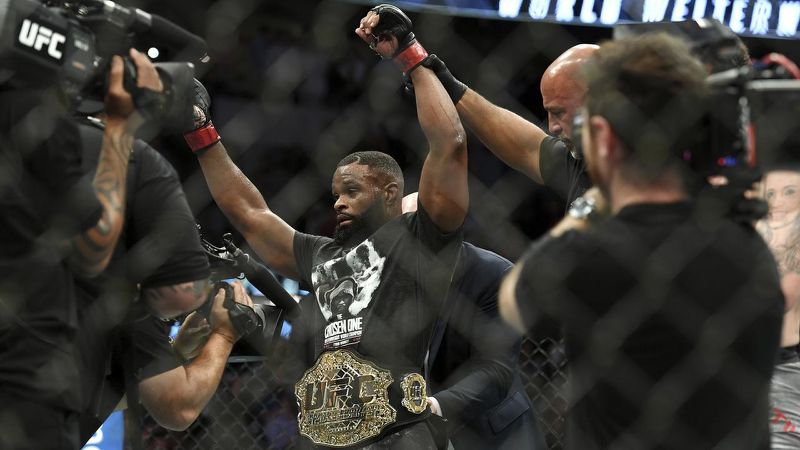 Tyron Woodley Silences Critics With Dominant Win Over Darren Till

Among the current UFC champions, it appears that Tyron Woodley has taken the most criticism. Woodley, the promotion’s welterweight champion, has been called a ‘diva’ many times for making plenty of demands and for asking big fights that never came.

Most recently, Woodley rejected the idea of fighting standby opponent Kamaru Usman if in case his UFC 228 opponent Darren Till would not make weight or would pull out because of some medical issues.

Then Woodley is perhaps also the most underestimated champion in UFC history. Imagine Woodley opening as a -141 favorite against Till’s +119 only to end up as a +115 underdog while his UFC 228 challenger came back at -135 when the betting lines for UFC 228 closed. Woodley was also the underdog when he fought Stephen Thompson at UFC 205 and when they rematched at UFC 209.

Woodley was heavily criticized for his cautious performance against Wonderboy, not once but twice. When he grounded submission specialist Demian Maia in his most recent title defense, Tyron Woodley was supposed to cement his legacy as the best welterweight today. But no, Woodley got hurt in the fight and a shoulder injury forced him out of action for over a year. So when Woodley finally came to fight at UFC 228, many thought he would be rusty and that he would be easy picking for a bigger, stronger and younger Darren Till. So much for all the hype and the betting lines. Tyron Woodley put on a show.

In a display of explosiveness, power and ground game, Woodley easily outclassed the man known as the Gorilla. Fighting in what was most probably the greatest performance of his career, Woodley submitted Till in the second round after punishing the Brit with a superb ground and pound attack.

Known for his methodical attack in recent years, Woodley surprised the crowd by being very aggressive early on by throwing combinations and shooting for takedowns. Woodley then tried to neutralize his opponent’s size by going to the clinch although twice they were separated by referee Dan Miragliotta for lack of action. As Woodley closed the distance, Till was never able to unload his big bombs in round one.

In the second round, Till began to finally open up. But as he was charging, Woodley caught him with a perfectly timed right hand to the face that floored the challenger. Woodley rushed in, secured top position and unloaded a heavy ground and pound attack. However, the Englishman didn’t give up easily. He took Woodley’s best shots and continued to defend himself on the ground. Then just as it appeared that Woodley was starting to slow down, the champ transitioned and got the D’Arce choke that caused Till to tap out. Game, set and match for Tyron Woodley.

Till was obviously disappointed but the Brit never knew what hit him. He entered the fight highly touted and undefeated but Woodley proved that his younger foe wasn’t ready for the real deal. Likewise, Till had to deal with a hard weight cut and although he made 169 during Friday’s weigh-ins, he looked gaunt while Woodley appeared in superb form.

Still, that doesn’t take away the fact that Woodley caught him off guard with a rare submission attempt. Looking at the replays, it looked like Till didn’t know what Woodley was up to. He was trying to defend from strikes and the next thing he knew, T-Wood had his neck all choked up. Woodley’s brilliant submission move earned him a BJJ promotion as his cornerman awarded him the black belt inside the octagon.

So it was a double victory for Woodley on Saturday night: he kept his title and earned his BJJ black belt in one night. Not only that, the champion also earned an extra $50K for Performance of the Night. More importantly, Woodley most probably earned the respect of his critics for that scintillating performance.

Look, I’m no Tyron Woodley fan and I’m not about to jump into the bandwagon. But as a critic of Woodley, he has earned my respect for showing up at UFC 228. Personally, I had picked Darren Till to win but Woodley not only showed he was the better all-around fighter but he also proved that he is the best welterweight today.

Woodley has now defended the UFC welterweight title four times. He was coming off a 14 month layoff and a shoulder injury. He is now 6-0-1 in his last seven fights and with the way he looked on Saturday night, he has even gotten better. That said, Woodley should have already silenced his critics.

It didn’t take long for Woodley’s chief critic to go to social media to challenge the champion. Colby Covington, who won the interim UFC welterweight title in June, took to Twitter to issue a challenge to Woodley. Said Covington:

“You didn’t blow it,” Covington wrote. “Time for you to come see me in (Madison Square Garden). America’s Champ has another promise to keep.”

Covington was talking about UFC 230 which is scheduled for November 3, 2018 at the fabled Madison Square Garden in New York. Currently, the lightweight bout between the comebacking Nate Diaz and Dustin Poirier is listed as its main event. But if Woodley, Covington and the UFC can come up with something soon, there’s a possibility that the title fight is going to dislodge Nate’s comeback bout as main event.

Backstage, Woodley was asked what’s next for him and the champ sounded like he already knows what lies ahead:

As for the date, Woodley said he is game for a quick turnaround fight and he was also looking at the November 3 date. Added The Chosen One:

“The more I fight, the better I get and more confident I get. So I want to stay as active as possible. If Nov. is the date they’re looking for a main event, I think they’ve got their guy.”

When asked about Covington as his next opponent, Woodley sounded off:
“Is it the dude that needs the Clariton? The Zyrtec? My god,” the champ said. “This guy had a chance. He let Darren Till go out there and take his whooping for him. He tried to pause and tried to wait until a bigger pay-per-view, because his eyes got big.

“My thing is, I’m going to fight anybody. I’m the best in the world. Anybody they put in front of me, they’re going to get beat up. If it’s Colby Covington, if it’s (Kamaru) Usman, if it’s Robert Whittaker, if it’s whoever they want me to fight, we’re going to do it.”

If Woodley is to fight at UFC 230 then there is no other fight to make other than Covington. UFC President Dana White said on Friday that the organization would be stripping Covington of his interim title once the bell rang for Woodley vs Till. However, White also added that Covington will be the 170 pound division’s #1 ranked challenger and that he is going to fight the winner of Woodley vs. Till.