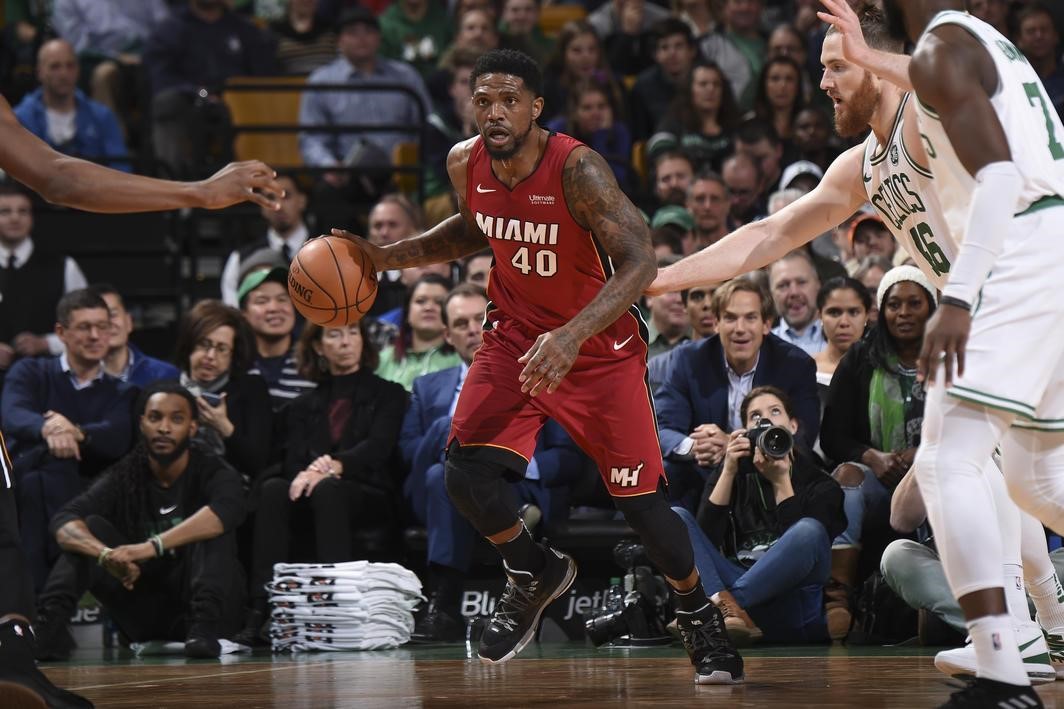 Udonis Haslem To Return For 16th Season In Miami

Some players get hired by NBA team to put up numbers. Others are signed because teams value their presence. Such is the case of Udonis Haslem who has played sparingly for the Miami Heat these past two seasons. Despite that, the organization wanted him to return so badly next season. Now he’s back, at least for one more season.

According to NBA sources, Haslem and the Heat have agreed on a one-year deal worth the veterans’ minimum of $2.4M. The person with knowledge of the negotiations spoke to the Associated Press on Thursday night on condition of anonymity because the deal had not yet signed although it is believed that what it lacks now if formality.

"When players come in and we talk to them about what it means to be a Miami Heat player, we point them at Udonis Haslem," Heat coach Erik Spoelstra said earlier this offseason.

Now that the Heat barometer is back, Spoelstra has the luxury of having another motivator on the bench and inside the locker room. Haslem’s signing could also pave the way for the return of Miami’s original superstar Dwyane Wade who remains undecided on the upcoming season.

Wade and Haslem are the only players to play in all three of the Miami Heat’s championship squads. Together with Shaquille O’Neal, they won their first title in 2006. The Heat also won in 2012 and 2013 with superstars LeBron James and Chris Bosh leading the team along with Wade.

Shifting To A Mentor Role 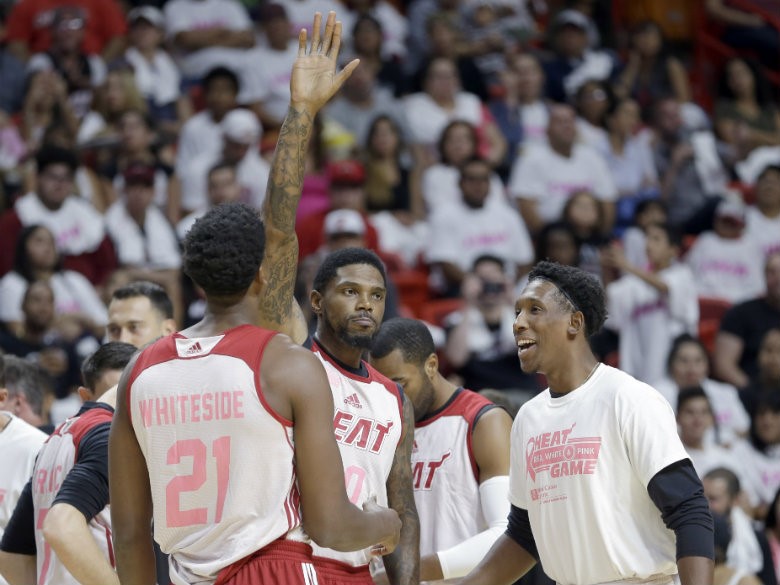 Haslem has played sparingly for the Heat in the past years, suiting up for only a combined 30 games in the last two seasons while playing a total of 202 minutes over that period. Last season, Haslem averaged just 5.1 minutes of playing time per game and posted career lows in almost every statistical category. He’s not played more than 20 minutes in a single games since 2017. But it’s not longer about the minutes and the numbers now. Haslem has shifted into a mentor role for his younger teammates while serving as their glue inside the locker room.

"UD is always the guy who sets the standard for teammates,"

Dragic is the oldest player on the Heat’s current roster at 32. Only 30 year old Wayne Ellington is the other player in his thirties who has a contract with the Heat. For a team as talented and as young as the Heat, Haslem becomes all the more important. Not only is he a valuable leader, his story should be an inspiration to his young teammates.

After Haslem left the University of Florida, was undafted in the 2002 NBA Draft and ballooned to 300 pounds. He then played for Chalon-Sur-Saône, a professional basketball team in France and there he lost over 70 pounds and thus earning a Summer League spot in the NBA.

He was then signed by his hometown team, the Miami Heat in 2003 and he quickly made use of his chance by making the All-Rookie second team in 2003-04 before eventually becoming a nightly double double threat in the NBA. Haslem averaged at least 10 points per game in four seasons and had a total of six seasons where he averaged more than 8 rebounds per game.

Haslem was instrumental during the Heat’s first title run in 2006. He particularly shone in Game 6 of the 2006 NBA Finals when he scored 17 points and grabbed 10 rebounds as Miami defeated the Dallas Mavericks for the first NBA title in franchise history. It was Dwyane Wade who led the way with 36 points for the Heat but Haslem’s double double proved to be the difference in the title clincher.

Haslem is the Heat’s current all-time rebounding leader with a career total of 5,711 rebounds. He is the only player in NBA history who was undrafted and is a franchise’s all-time leading rebounder. He has career averages of 7.7 points and 6.8 rebounds per game.

Despite solid numbers early in his career, Haslem accepted a secondary role in the team as the Heat signed superstar free agents LeBron James and Chris Bosh. Still, Haslem was a starter on the two title team that featured James, Bosh and Wade. His contributions to the Heat’s title runs were never unnoticed. Said Shaquille O’Neal after the Heat won it all in 2006:

"UD doesn't get a lot of credit, but he was the heart and soul of our team," Shaquille O'Neal said of the 2006 champions, per Tom D'Angelo of the Palm Beach Post. "He should also get his jersey retired because he's my hero."

That jersey retirement will have to wait though as Haslem is set to return to the Heat for at least one more year. By signing for the Heat, Haslem now has played with 126 other Heat players during the regular season and that’s not even counting the teammates who played with him during training camps and the preseason who didn’t make the cut.

He is the longest tenured player in franchise history and his 16 year career is half of the Heat’s NBA existence.Haslem has the 2nd longest active streak for most seasons played with one franchise. Only Dirk Nowitzki’s 21 is more. Haslem will also become the third oldest player in the NBA, behind Nowitzki and the Atlanta Hawks’ Vince Carter. 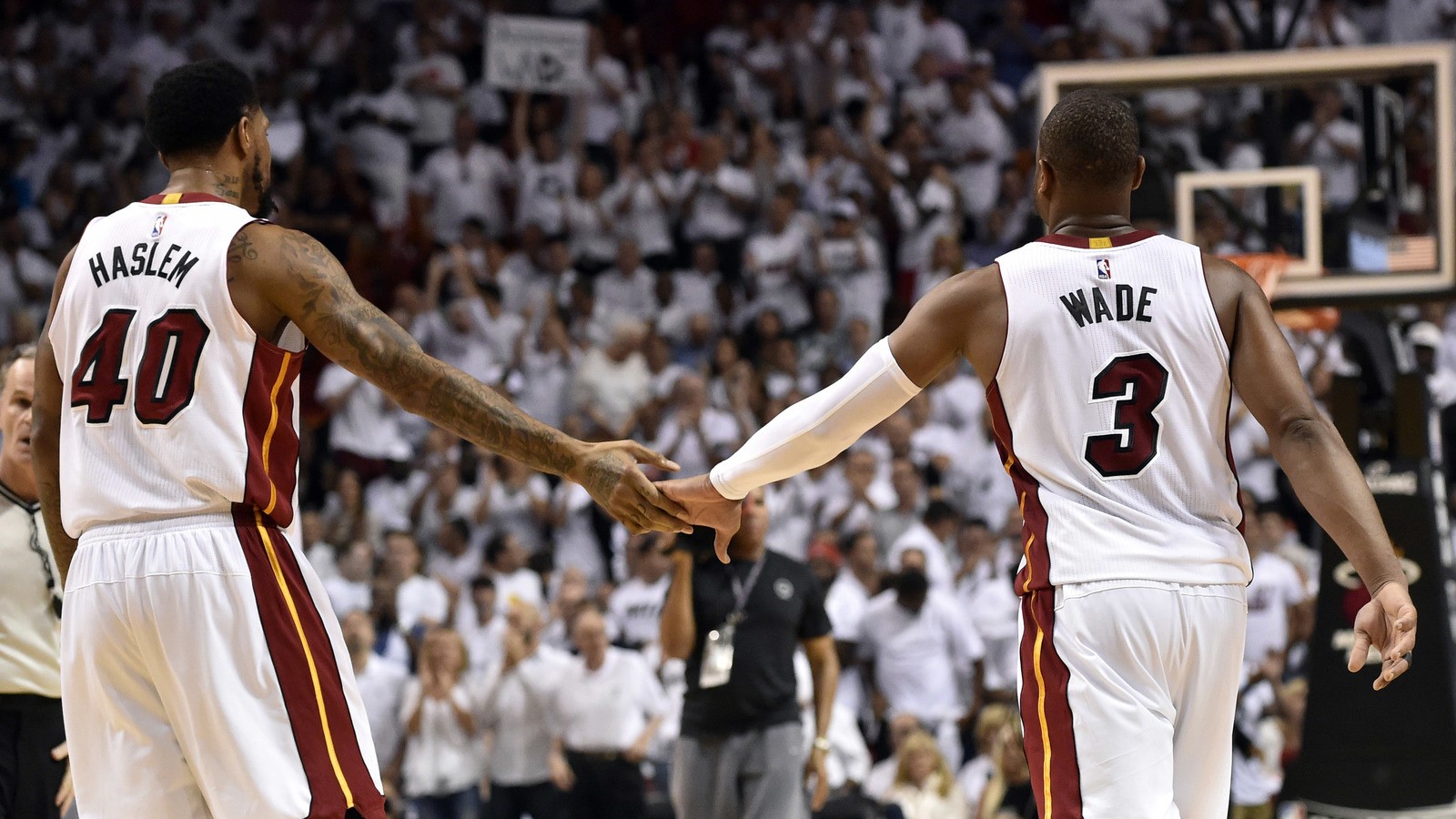 With Haslem in the line-up, the Heat now have a total of 19 players under contract, just one shy of the preseason maximum allowed by the league. Miami is reportedly saving that final spot for the original franchise superstar Dwyane Wade who has not made a final decision on whether he will return to Miami. The Heat will have to trim their roster count to 15 before their October 17 opener against the Orlando Magic and they hope Wade will be part of it.

Wade has been linked to many rumors, including a possible stint in the Chinese professional basketball league and of course, retirement. But while Wade dismissed the possibility of playing overseas, he told reporters that if he is coming back to the NBA, it will be in a Heat uniform. Heat President Pat Riley has made it public that he wants Wade back this season. Said Riley:

“I want Dwyane back as a player, a guy who wants to have the greatest year he’s ever had as a player. If he plays, he’s going to want to do it. We don’t want him back as a placemat holder or someone who’s going to be a veteran in the locker room. Dwyane is a great player, a great talent. He can make a big difference for us.”

Last season, Wade returned to Miami after spending time in Chicago and Cleveland. He was a key veteran presence in the team after the trade deadline and was instrumental in the Heat’s return to the postseason. With Haslem back in tow, the latest rumors are that Wade is going to re-sign with the Heat ‘soon’. If that’s the case, then the Heat hit two birds with one stone in the UD signing. And that’s double the good news for them and their fans.