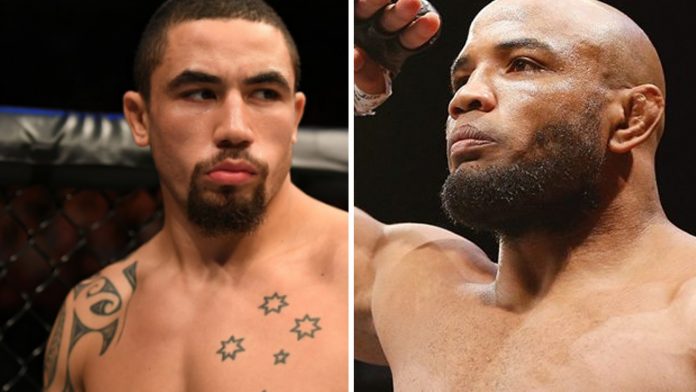 They say that styles make fights and that saying goes for Robert Whitaker and Yoel Romero.

When the pair first fought for the interim UFC middleweight title at UFC 213, they produced an instant classic. Romero won the first two rounds while Whitaker finished strong. When all was said and done, the Aussie slugger won by a razor thin 48-47 score across all scorecards.

On Saturday night, the two fighters ran back their 2017 bout at the main event of UFC 225 at the United Center in Chicago and it was absolutely another spectacular bout that many writers and fans believe will be up there as one of the best fights of the year.

The toast of his home country, Whitaker became the first Australian to win a UFC title when he defeated Yoel Romero at UFC 213 eleven months ago to capture the interim UFC middleweight title. The former winner of the Ultimate Fighter: The Smashes welterweight tournament was later promoted to full champion status after Georges St. Pierre relinquished the UFC middleweight belt he won from Michael Bisping.

Whitaker was supposed to make his first title defense against former champion Luke Rockhold at UFC 221 in his home country of Australia. But the Reaper suffered a staph infection that didn’t just threaten his title reign but also his life as well. With Whitaker out of UFC 221, Romero stepped in on short notice and fought Rockhold for the interim belt instead. The Cuban Olympian upset Rockhold to earn a rematch with Whitaker.

Unlike their first bout where it was Romero who started out strong and built and early lead, it was Whitaker who got his game going early in this fight. The 27 year old champion boxed around Romero and peppered him with jabs while kicking almost at will on the challenger’s leg kick.

Surprisingly, Romero was in defensive mode throughout the first two rounds, content to just covering up and avoiding significant damage Many thought that Romero had nothing to show after a painful and excruciating weight cut that eventually failed him. But little did we know that challenger was saving his best for last and with his explosive power, perhaps he felt that he could fall behind on points and just knock out Whitaker later.

While the strategy preserved his cardio for the championship rounds and gave him a chance to beat Whitaker, it allowed the champion to build a big lead in the scorecards. This proved to be costly because after the back and forth action fight, Whitaker retained his belt with scores of 48-47, 48-47 and 47-48.

When you look at the final stats, Whitaker landed 128 significant strikes as compared to Romero’s 111. But the challenger had the advantage in takedowns at 3 versus none and more importantly scored two knockdowns against the champion. Had Romero been a little busier at the start, maybe the decision would have been read differently.

Slowed Down By Broken Hand

After the fight, Whitaker revealed that he broke his hand in the first round of the bout, the reason why he didn’t throw it in the championship rounds. According to the Reaper, he busted his right hand in the opening round and could not feel anything up to his elbow. With the injury becoming obvious in Round 4, Romero took his chances and nearly stole the fight from the Aussie champion.

The Cuban challenger was pretty much dormant in the fourth round, apparently trying to recover after emptying his gas tank in the previous round in an attempt to finish off Whitaker. The champion appeared to have his legs back and started connecting with left jabs and leg kicks. But just before the bell sounded, Romero exploded again and looked like he wobbled the Whitaker again.

Romero’s momentum carried onto the final round as he dropped Whitaker for the second time in the fight. This time, the challenger nearly pounded him out on the ground. But the champ dug deep and managed to get back on his feet. He would finish the fight kicking away at his Cuban challenger.

The United Center crowd rose to its feet as both fighters headed to their corners thinking they had won the fight. It was clear that Whitaker won the early rounds but with Romero scoring two knockdowns, there were some tense moments before the decision was announced.

Before the bout even began, Yoel Romero already lost the chance to win the title on the scales. The 41 year old Cuban tipped the scales at 186 pounds in his first attempt and then came back an hour later to weight in at 185.2 Because of that, the bout became a non-title bout but still proceeded as a five round affair because it was the main event of UFC 225.

It was the second consecutive bout that Romero has missed weight. Four months ago at UFC 221, Romero stepped in for the injured Whitaker and faced former UFC middleweight champion Luke Rockhold for the interim UFC middleweight title. He missed the 185 pound weight limit during the weigh-ins and proceeded to knock out Rockhold in three rounds.

While Romero didn’t win the interim belt despite beating Rockhold, he did earn a second crack at Whitaker, which was why they fought again on Saturday night. But Romero didn’t learn his lesson and for the second straight championship bout, he lost his right to win his first ever belt because of weight issues.

Some controversy erupted during the weigh-ins after Romero complained that the Illinois Athletic Commission, which had jurisdiction over UFC 225, gave him just one hour after his initial weigh-in to make the weight limit of 185 pounds. In other venues, fighters are usually given two hours to make weight after missing on their first try. Still, that did not justify why Romero didn’t make weight on his first try, given that he had a full camp to prepare for his rematch with Whitaker.

After the fight, UFC President Dana White suggested that Romero move up to light heavyweight after the fight. But moving to 205 at his advanced age may not be a good move for the Cuban. Give he just missed the weight by a mere 0.2 pounds, he may be better off staying at middleweight. After all, Romero’s been a middleweight for over two decades and had no trouble making weight before his last two bouts.

Given how he fared against Whitaker on Saturday night, it won’t be a bad idea to book these two to a third fight, even if Whitaker won the first two. Remember that Whitaker won by a mere point in both the first and second bouts. If Romero played his strategy better, he would be easily world champion right now.