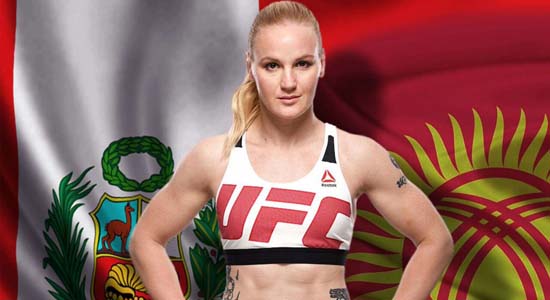 It's been almost a week after UFC 215 and yet Valentina Shevchenko is still crying over spilled milk. Shevchenko lost a razor thin debatable but certainly not controversial decision to Amanda Nunes in the main event. Shevchenko claims that she did enough damage to win the title. She has an argument. But the judges thought so otherwise. They also had a point.

Judge David Therien and Sal D'Amato scored the fight 48-47 in favor of Amanda Nunes. Ther men had Nunes winning rounds 1, 2 and 5 while D'Amato had the champ winning rounds 1, 3 and 5. On the other hand, judge Tony weeks gave Shevchenko the nod, 48-47. Weeks gave the challenger rounds 2, 3 and 5.

If you notice, there was only one round where the three judges were unanimous about and that was round 1 where Shevchenko looked most tentative, perhaps surprised at why the usually aggressive Nunes didn't go at her when that opening horn sounded. Nunes meanwhile, landed jabs and kicks but was content at keeping Shevchenko at bay rather than trying to finish the fight.

Shevchenko fought better from round two to five. The challenger didn't just counter more effectively but it appeared that she landed the more telling blows. If you take a look at the Fightmetric stats, Nunes landed more total strikes 90-85 including an 86-72 advantage in significant strikes landed. A more careful examination of the numbers though showed that it was Shevchenko who landed the better strikes.

56 of Nunes 86 strikes were low kicks, which didn't do any physical damage to Shevchenko. However, these kicks disrupted Valentina's offense and prevented her from unleashing a sustained attack ( if she planned one ). On the other hand, only 33 of Shevchenko's 72 strikes were low kicks. The challenger landed more head blows at 30-18. And even when Nunes was on top of her in round five, Bullet landed 4 ground strikes to none for the champion.

It was obvious that the game plan for Amanda Nunes was to go five rounds. In fact, it appeared that she was more concerned about lasting five rounds rather than finishing her opponent. Nunes' cardio has always been her critics' main jab at her. To make sure she went the distance strong, she didn't go all out. This was the first time Nunes went the full route and she made sure she won.

Nunes not only landed more strikes than Shevchenko, she outlanded her in four of the five rounds of the fight. No, we're not saying she won the fight because of that because just like in boxing, it's not the number of punches or strikes ( in MMA ) that win fights. What we're saying is if we go by the numbers, Shevchenko didn't do enough.

Even then, despite Nunes advantage in strikes landed, all three judges scored the fight 38-38 after four rounds. That means that the fight was decided in that fifth and final round. If we recall what happened in round 5, it was the only round where Shevchenko outlanded Nunes in strikes at 14-4. However, towards the end of the round, Shevchenko made a tactical mistake that cost her the fight and the belt.

Bullet went for a takedown but Nunes took her back as they went to the mat. Shevchenko escaped the position but a little later, Nunes landed a takedown that might have stolen the round. As we said, Nunes didn't land a strike while she was on top, but she pinned her challenger down in the closing moments of a close fight.

Sometimes, we think that landing a takedown can be so overrated that it can 'steal a round', especially if the fighter on top didn't do damage after getting on top. But isn't a takedown part of grappling and effective grappling is one of the three basic scoring criteria in MMA?

The fight was on the feet most of the time. If there was any semblance of grappling, it was early in the fight when Nunes landed her first take down and in those two sequences in the final moments of the fight. Nunes won both of those sequences. Two of the judges gave her round five because of those . That won the fight for her.

We know that in any fight sport, for a challenger to take the title, he or she must do so convincingly. As they say, the burden of proof is on the challenger, not the champion. That wasn't the case at Nunes vs Shevchenko 2. If Valentina Shevchenko won that bout, she didn't do so without a shadow of a doubt.

Valentina Shevchenko proved that she is the better striker overall. But her fighting style is anchored on effective countering not aggression. That is not her fault. But had she go at Amanda Nunes right from the get go, moving forward could have changed the outcome of the fight. But that's not her style.

It was obvious that Amanda Nunes had a lot of trouble with Shevchenko. You could just see her facial expression after the judges' decision was read. Shevchenko is no easy prey. She is one of the most decorated strikers of all-time. However, Nunes was able to make the adjustment. She didn't fall for Valentina's traps.

Nunes abandoned her natural style of fighting to adjust to her opponent. She controlled the center of the octagon. While she didn't finish her opponent, she landed enough strikes to keep her challenger off her. Nunes showed she had the cardio to last five rounds and punctuated that by landing a takedown in the closing moments. As the champion, that looked enough to to retain her belt. No ifs and buts.

Shevchenko is asking for a rematch but technically, this was her rematch. She lost to Nunes in a non-title fight at UFC 196. Giving here an immediate rematch may not be a good idea. But if you look at the UFC Women's bantamweight ladder, the next top two challengers ( Holly Holm and Juliana Pena ) lost to Shevchenko. The next woman on the list is Ronda Rousey, whom Nunes blasted last year and who is unofficially retired.

Good thing for the UFC, Nunes will be out indefinitely ( but says she will be back in 2018 ) to undergo surgery to correct the problems on her sinus that forced her to withdraw from UFC 213. With this development, they don't have to think too much of her next fight although, given the current situation, Raquel Pennington would probably make most sense. Or Holly Holm perhaps.

As for Shevchenko, she can take a fight or two and position herself back in the title picture. Sure, she has a right to say she deserves another crack at Amanda Nunes but let's face it, nobody wants that fight right now. She lost twice to Nunes already so there's no point in making a trilogy now. But if she quits whining, build her resume again and let the fight marinate, fans may demand it one more time.