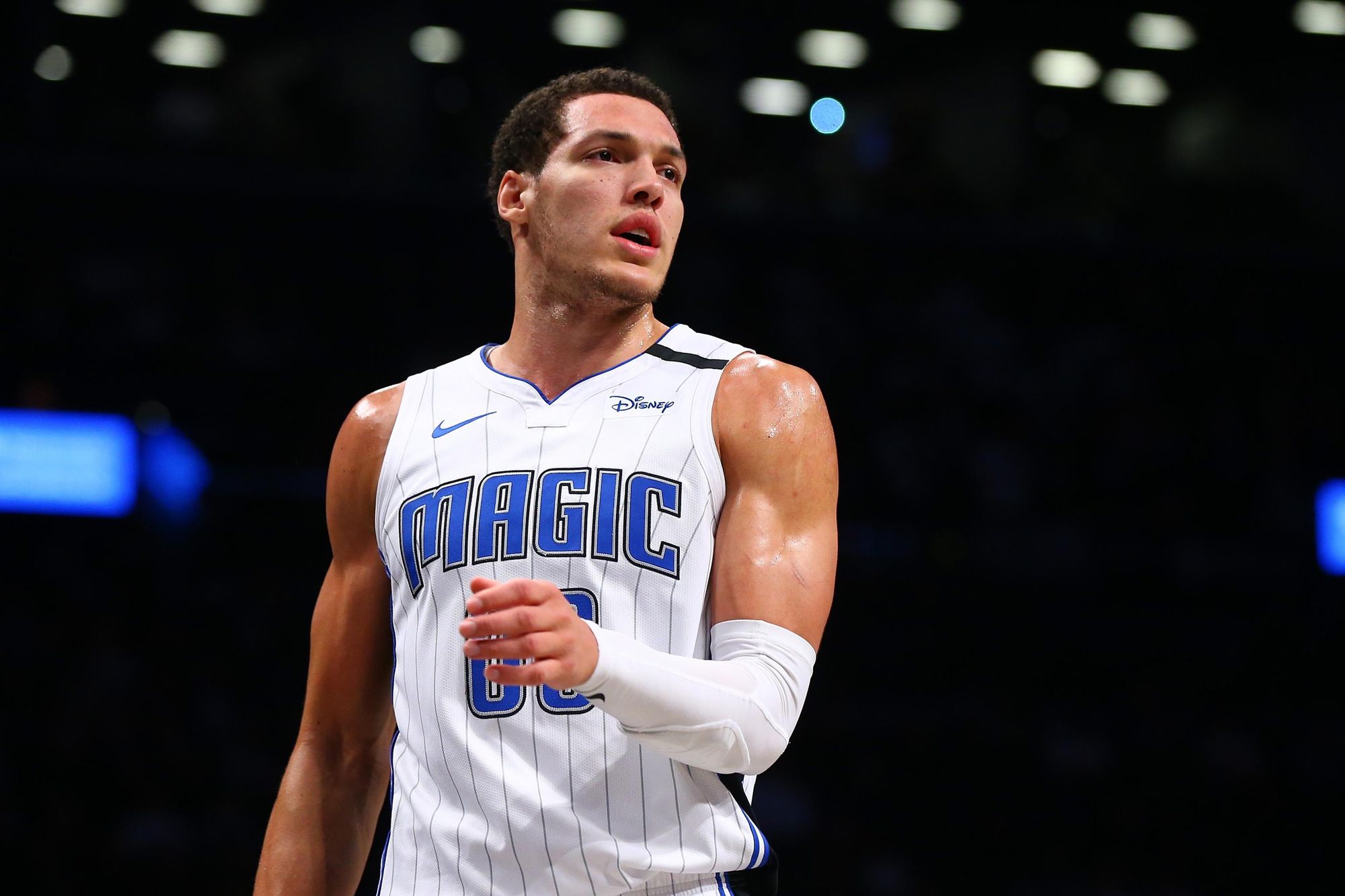 If magic indeed exists, Orlando certainly needs a pint of it. Like many other teams in the Eastern Conference, the Magic has not taken a step forward in terms of seriously contending in the postseason. They barely made it to the playoffs last season, although a D.J. Augustin trifecta gave them one win in the first round before Kawhi Leonard and the Toronto Raptors dismantled them the rest of the way.

The NBA is a superstar league and the Magic doesn’t have one. It all boils down to that fact. Sure, we can argue that Nikola Vucevic notched an All-Star appearance last year and he is putting in double-double numbers each and every night. Offensively, he is very difficult to stop. Vucevic has an excellent inside-outside scoring prowess, and he rarely commits mistake on that end of the floor. His defense may need a little bit more tweaking, but he is an outstanding rebounder.

Yet, “Vooch” has not proven himself as a winner. At this point of his career, it has become apparent that he is more of a star sidekick than an alpha. Orlando needs another star, a leader who can empower Vucevic’s strengths while also having the ability to create scoring opportunities for himself.

More than the need for star power, the Magic front office also needs to fix their logjam at the frontcourt. While it is not bad to stockpile assets and try them out to see who will fit in the best, the audition’s results are long due. Aaron Gordon has been receiving tons of trade interest, while young combo big men Mo Bamba and Jonathan Isaac can certainly be valuable trade assets.

Should the Magic pursue a trade or bring in new personnel this offseason, it is expected that they will focus on their backcourt needs. Augustin’s strength is on his shooting, not his playmaking. Markelle Fultz is slowly getting into his groove, but he is still a long road away from becoming a steady facilitator on offense.

Josh Robbins, The Athletic’s beat writer for the Magic, recently conducted a mailbag session with Orlando fans. Robbins acknowledged Fultz’ drastic growth this season, while also reiterated that the development of Bamba and Isaac will be the key to the team’s future. Robbins then took note of how the Magic will handle the situation with Evan Fournier, the team’s second-leading scorer.

“Fultz has taken a massive step forward this season, but eventually he will need to do more, including improving his long-range shooting and his defense. Isaac needs to stay healthy, continue to develop his body and improve as a shooter. And Bamba needs to bulk up, improve his wind and become far more consistent on both ends.

I do not think Nikola Vucevic is inhibiting the growth of the team. I think he facilitates the youngsters’ growth with his floor spacing, passing and penchant for making the right plays.

The team has major decisions ahead. Evan Fournier can become an unrestricted free  agent once the offseason arrives, and the team would have to decide whether it wants to invest major long-term money in a player who has never made an All-Star team. If Fournier leaves, that would constitute a major change.”

Time is running out for the Magic to figure things out before Vucevic and his people decide that enough is enough. The sweet-shooting big man is not getting any younger. At this point of time, it is no secret that his current team is nowhere near elite status in the league. While it is impossible for them to revamp their roster and be instant perennial contenders, moving forward on the right direction could be enough to convince Vucevic to again exercise his patience and stay.

Orlando fans have been holding their breaths for so long as they await for the moment when Gordon finally breaks out of his shell. But the high-leaping combo forward is still miles away from becoming an All-Star, and the scary thing is that he may never reach that status for the rest of his career.

Still, Gordon is a very versatile player. He has what it takes to become a high-level, starting-caliber glue guy for any team. While his elite athleticism will always be his trump card, he is also exhibiting a much-improved understanding of the game. Gordon is also increasing his consistency from long-range, a very important weapon to combine with his ability to finish in the paint. The 6-foot-9 forward can also read defenses well and make accurate passes, evident in his 3.7 assist average this season.

On the other end of the floor, Gordon is yet to develop great defensive instincts. His athleticism and mobility help him get by on that facet of his game, but there’s still plenty of room for improvement. He will need more experience and time to hone his defensive mentality, but he definitely has the physical skills to be able to thrive.

With all these said, we can come to the conclusion that Gordon possess the unique package of being almost good at everything. However, that is both a blessing and a curse. Gordon still does not have a go-to-move on offense and he cannot consistently manufacture shots on his own. He is also far from being a capable lockdown defender.

So, how will the Magic front office deal with Gordon moving forward? There were multiple reports saying that trades involving the high-flying dunker were discussed before the deadline, making it seem that the team will consider shipping him in the offseason. Robbins say that the team is facing a dilemma of restarting the system without Gordon or hoping that more success will come from within the roster rather than outside of it.

“There is no “clock is ticking” urgency with regard to Aaron Gordon, who played  superbly after he returned to power forward. Gordon has two full seasons remaining on his contract. But the fact that neither Gordon nor Isaac are natural small forwards presents a problem offensively, and at some point, that situation almost certainly needs to be resolved. Hypothetically, the team could trade Gordon as soon as this offseason, although his recent stellar play should give the team pause.”

Gordon’s multi-dimensional package will be much coveted in the trade market. There were speculations that the team had talks with the Brooklyn Nets to manufacture a trade involving Gordon and scoring point guard Spencer Dinwiddie. While Fultz’ potential is certainly intriguing, bringing in a proven player like Dinwiddie can amp up the team’s hope for more success.

Prediction: Gordon gets traded in the offseason

Isaac’s growth on both offense and defense could have been a big headline if he did not get injured. He has become Orlando’s anchor on the defensive end, and offense has come fluidly for him this season. During a one-point loss at the hands of the Dallas Mavericks last November 6, Isaac showed off his versatility by almost tallying a rare 5x5 performance. In fact, he was only one steal shy of the feat as he amassed 13 points, 10 rebounds, 5 assists, 6 blocks and 4 steals.

That game alone shows what the 6-foot-11 combo forward can do for his team. He has the speed to go along with his length, and what’s even scarier is that he is now developing his skills. But a knee injury he sustained at the start of the year hampered his progress. Staying healthy has always been the problem for Isaac, but the continuous development of his game is very noticeable.

As for his recovery from the knee injury, it was initially announced that he will be out for the rest of the season. But with the NBA’s decision to suspend games in light of the coronavirus outbreak, signs are pointing towards the high possibility that Isaac can return in time for the Magic’s playoff push.

In an exclusive sit-down with Robbins, Isaac emphasized that the longer the suspension goes on, the better it is for his chances of coming back.

“My answer is: If there is, then great! If I’m ready to play when this thing adjourns, I want to play. I can’t really speak for the front office. I can’t speak for everybody as a whole. At the end of the day, it really comes down to them because they want to make sure that everything is good, that I’m preserved and everything. And that’s great.

We can already make a solid case that the 22-year old forward is slowly overtaking Gordon in terms of overall contributions and versatility. Isaac also has a higher level of potential to become a star, making Gordon the more expendable asset in trade negotiations. With more minutes and more time to develop his skills, Isaac can form an intriguing tandem with Vucevic in the frontcourt.

Prediction: Magic retains Isaac and hope that he could grow into an All-Star