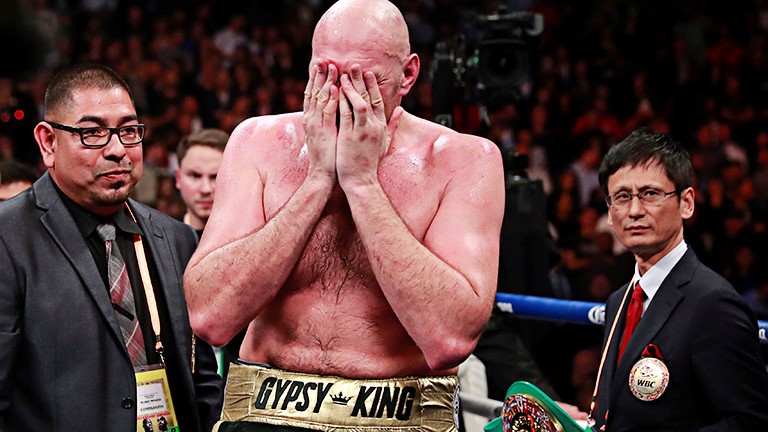 The biggest heavyweight showdown of the year happened on Saturday night in Los Angeles. Unfortunately, there was no winner after 12 rounds.

The ending caused mixed reactions from boxing experts, scribes and fans alike. Wilder’s supporters say their man won because he was the one who did damage in the fight, dropping Fury twice. On the other hand, Fury’s supporters claim their fighter was robbed and that boxing has become so corrupt because they felt Fury completely outboxed Wilder for 12 rounds and should have been awarded the victory. But did he? Or did Wilder do enough to win or even just survive with a draw?

Let’s take a close look at the scorecards of Wilder vs Fury: 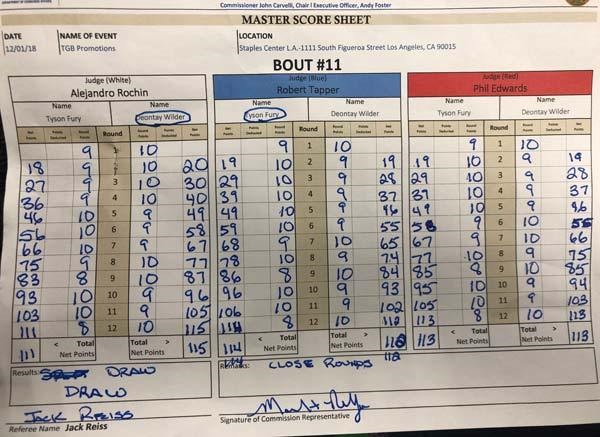 Notice that there are only six rounds which the judges scored unanimously. Three of the rounds went to Fury and the other three went to Wilder. Now Wilder was never seriously hurt in any of those rounds. On the other hand, Fury was knocked down in two of the three rounds Wilder unanimously won and was seriously hurt in one of them (Round 12). Now, many people (mostly Brits) are head over heels praises for Fury getting up from that 12th round knockout. Fine. But wasn’t Wilder coming up with a massive knockdown when he needed it most as equally impressive? Or even better?

Going back to the fight scoring, the judges were split 2-1 in the other six rounds with Fury winning five of those and Wilder taking one round. When judges aren’t unanimous in scoring a certain round, then that round must be too close to call. Hence, that round could have gone either way if it were another person sitting as the judge. It just so happened that the three people sitting as judges saw it for one fighter. In five of these rounds, it was Fury. 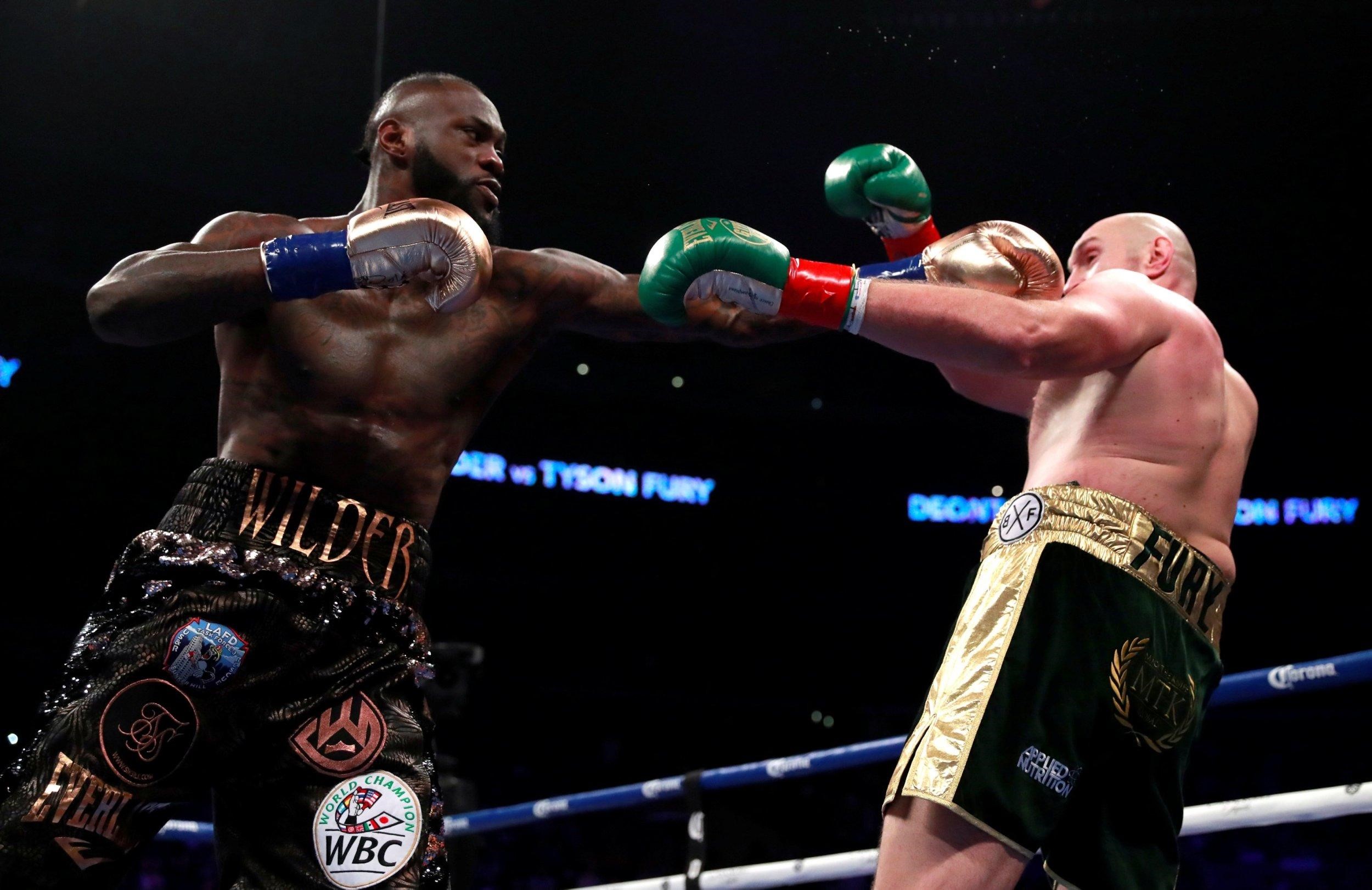 Now let’s simplify the scoring. Wilder scored knockdowns in Rounds 9 and 12 hence both rounds were scored 10-8 in his favor. That means that Wilder already had a four point scoring advantage in those two rounds alone. Wilder was the unanimous winner of Round 1. He also took Round 7 in two out of the three judges’ scorecards. That gives him already a six point advantage or five points, excluding round seven.

Now Fury’s supporters say their man outboxed Wilder in 8 of the 12 rounds. That’s their opinion. According to the judges, there were six unanimous rounds and six that were 2-1 in favor of one boxer. Those rounds could have gone either way, really. In a fight where Fury never hurt Wilder , how are they calling it corruption and robbery? Although the actual scores on the judges’ scorecards are different, our analogy can justify why the fight was a draw.

Tyson Fury is in fact luck to come out with a draw. He punched like a girl and never hurt Wilder. Although he did land more punches in the fight 84-71, Wilder was more aggressive and threw much more punches 430-327. Sure, those complaining say that Fury made Wilder miss. Sure he did and that was brilliant. But he did little damage to compliment that, opting to counter punch and coast along. You don’t win world titles fighting that way.

A challenger has to take the belt from the champion. Surely, Fury didn’t do that on Saturday night. He was the much more superior boxer yet he landed just 13 more punches against an opponent whom critics said fought with only one hand, his right. On the other hand, Wilder landed just 71 punches but put Fury down on his arse a couple of times. Now which is more impressive?

People talk about Wilder having nothing except that powerful right hand. That is absolutely true. However, Tyson Fury, who was supposed to be the supreme boxer between the two, could only out jab Wilder 46-40 throughout the fight and it was even Wilder who threw more jabs at 248-223. Fury did connect more power punches 38-31 but I’m not sure how much power they had because Wilder was never in trouble in the fight except for Rounds 10 and 11 where he looked like he punched himself out after trying (in vain) to finish Fury in Round 9. 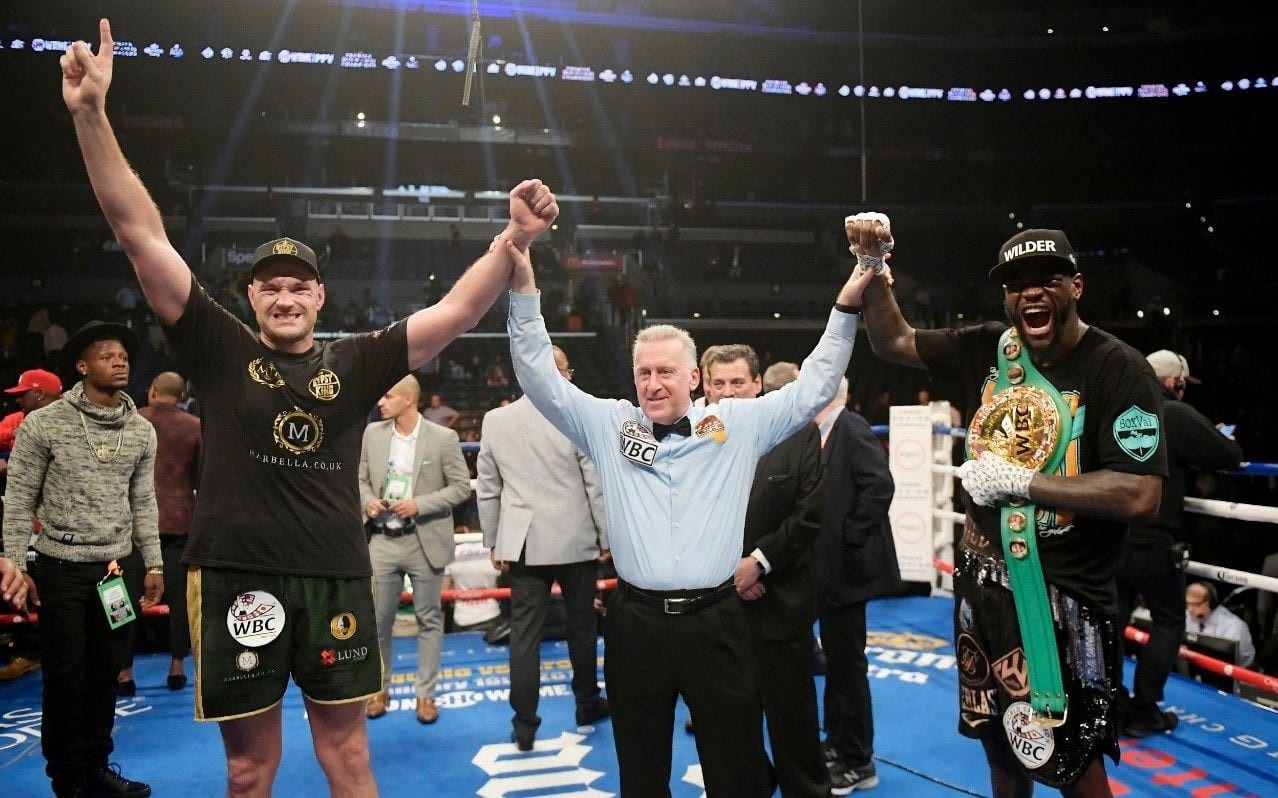 There was absolutely no robbery on Saturday night. Deontay Wilder and Tyson Fury fought an interesting bout. Both fighters had their moments and you can make a case for Tyson Fury boxing better than Deontay Wilder. But he got knocked down twice and certainly, you can’t win a world title-much more the heavyweight title of the world, after getting dropped twice in a four round span. Not especially if you didn’t convincingly outbox your opponent in the other rounds of the fight.

Tyson Fury won more rounds in the judges scorecards. But those rounds were close and the judges didn’t score all of those rounds unanimously. Remember judges score fights based on their preference of what they see. It’s never absolute. You can put in a separate trio of people in those seats and the fight scoring would have been different. It could have easily gone the other way especially with how cautiously Fury approached the bout and how he was conservative in his offense. You have to love his defense but defense don’t win championships in boxing.

On the other hand, Deontay Wilder entered the fight with a big disadvantage of not having the same set of skills as Tyson Fury. Sure, Wilder was the champion. He was the betting favorite but other than his right hand, what does he have? Basically nothing except a big pair of balls. Balls that Anthony Joshua will never have. Wilder entered the fight knowing his only chance was to knock out Fury. He wasn’t able to do that. But he dropped Fury twice in the fight including the big one in round 12. Sure, his fanatics say Fury rose from grave like the WWE’s Undertaker. That’s cute. But the point is he got dropped hard and hurt badly. That’s damage and that’s what counts in combat sports.

Robbery? I don’t think so. Corruption? I say they are losers. Sure, the fight ended in a draw. But boxing and the fans won on Saturday night. We saw two great heavyweight going at it inside one ring. Both gave their all. Both gave a good account of themselves. Unfortunately, we don’t have a winner. But that’s why we have rematches. And Anthony Joshua can only watch in the sidelines and salivate. He could have fought either man but chose not to. Now Wilder and Fury could be building a rivalry which we haven’t seen in a long time in boxing. That’s good for the sport. That’s good for the fans. And that’s also good for Wilder and Fury.