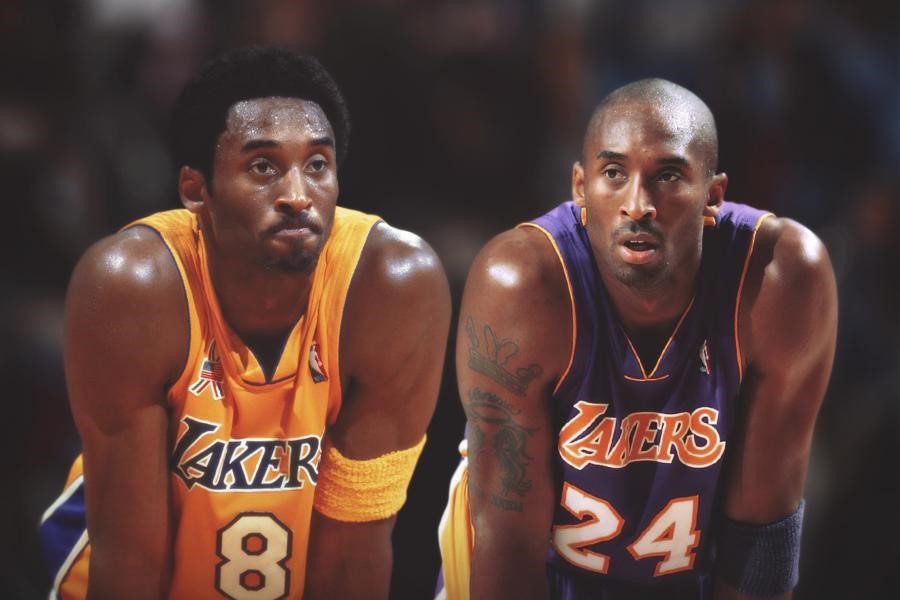 Which Kobe Bryant Was Better?

Not One But Two 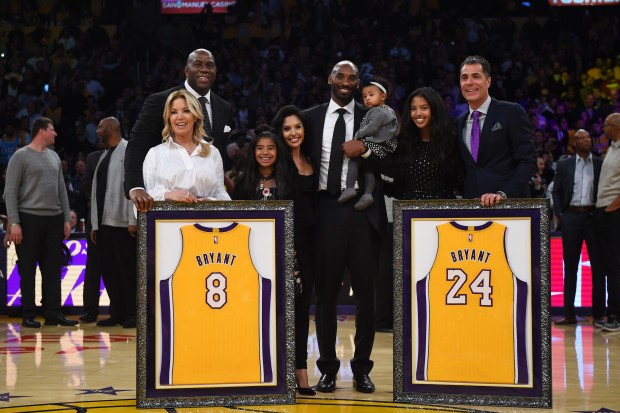 But Bryant didn’t just have one jersey number retired, he had two. The Black Mamba became the first player in NBA history to have two jersey numbers retired by a single franchise. He played 10 NBA seasons wearing #8 for the Lakers and then spent another 10 years donning the #24 for the Purple and Gold.

With both decades equally successful, the Lakers had a hard time picking which number to retire. So they chose to avoid a never ending debate and decided to retire both #8 and #24, and rightfully so.

“If you separated each of the accomplishments under those numbers, each of those players would qualify for the Hall of Fame.” Said Lakers’ President Jeanie Buss.

At some point, Bryant will also join Abdul Jabbar, Johnson, West, O’Neal and Lakers announcer Chick Hearn with his own statue outside the Staples Center. When Bryant was asked by Los Angeles Lakers columnist Bill Plaschke pregame which number he would choose for the statue, Kobe was at a loss for a straight answer:

Tough may be an understatement. 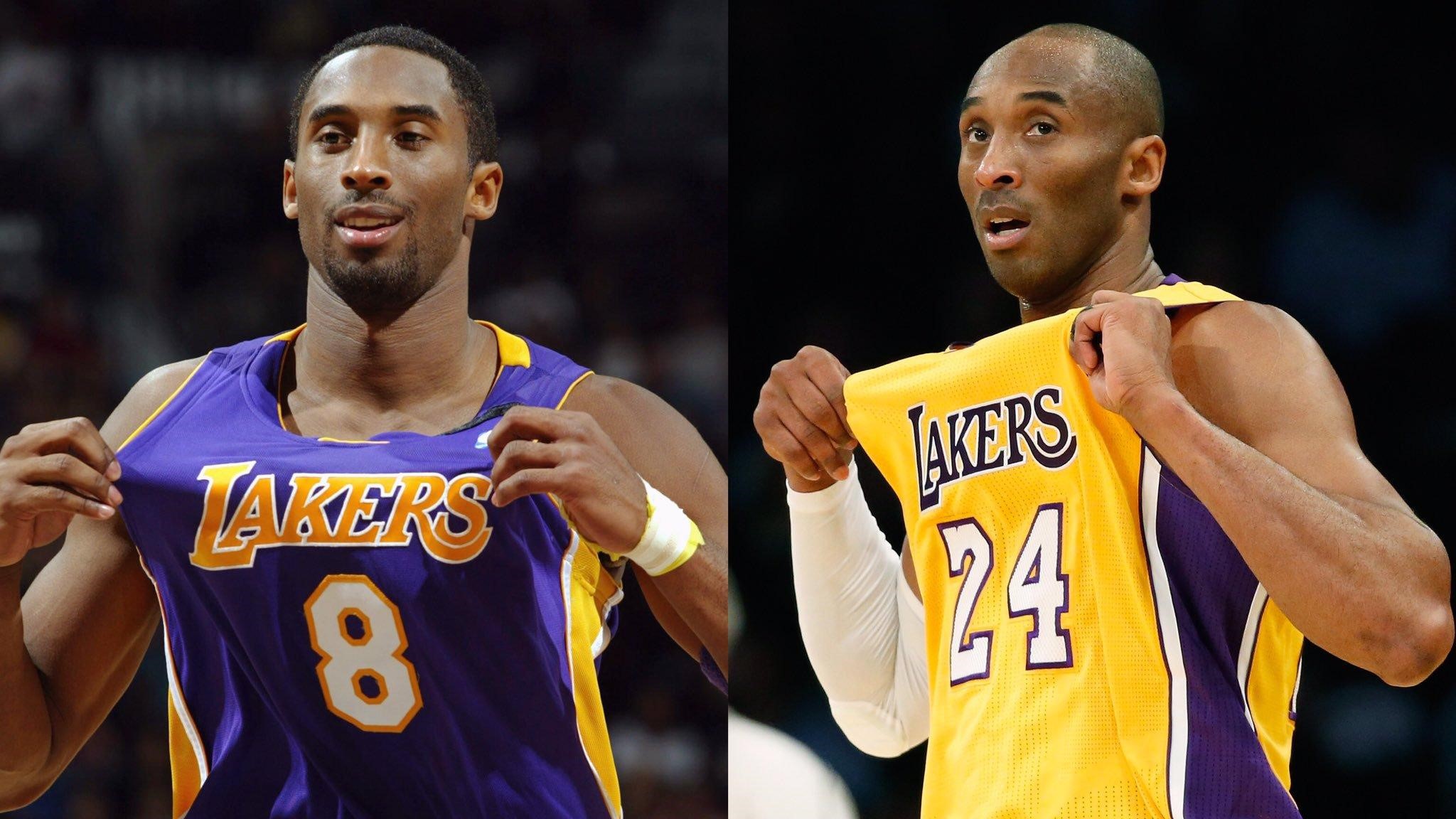 Kobe began his NBA career wearing #8 because his High School jersey number 33 was already retired in honor of Kareem Abdul Jabbar. Kobe also used #24 at Lower Merion High but that jersey number was already taken by then teammate George McLeod. So Bryant decided to use #8, the number he used when he was a kid playing basketball in Italy and the number used by his childhood idol, Mike D’Antoni ( now Houston Rockets coach ), a popular professional player in Italy during Kobe’s younger years.

Shaquille O’ Neal was traded to the Miami Heat in 2004, putting the Lakers into a new direction with Bryant at the helm. A year earlier, Bryant was also involved in a sexual assault incident. The criminal charges were later dropped and Bryant settled a civil lawsuit.

‘It’s kind of a clean slate,’ he said. ‘I started new. Just start completely fresh, focus on the number that meant a lot to me.’

24 was the number Kobe Bryant began his high school career with and the one where he made a name for himself. He wore #24 for three season before changing to #33 during his senior year. 33 was the high school jersey number of Kobe’s father, Joe ‘Jelly Bean’ Bryant. 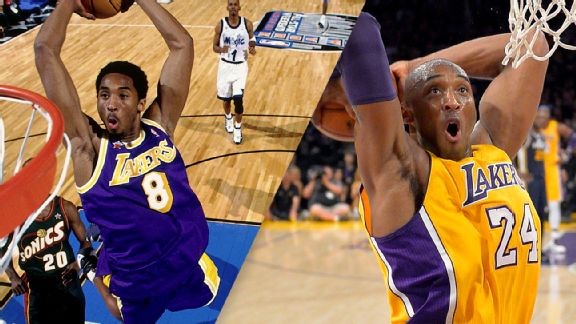 Bryant finished his legendary career as the third all-time leading scorer in NBA history with 33,643 career points. He scored 16,866 of those points as #8 and a total of 16,777 wearing #24. The difference between the two decades is just 89 points. Considering Bryant missed 69 games during the second half of his career, both decades were equally as impressive. 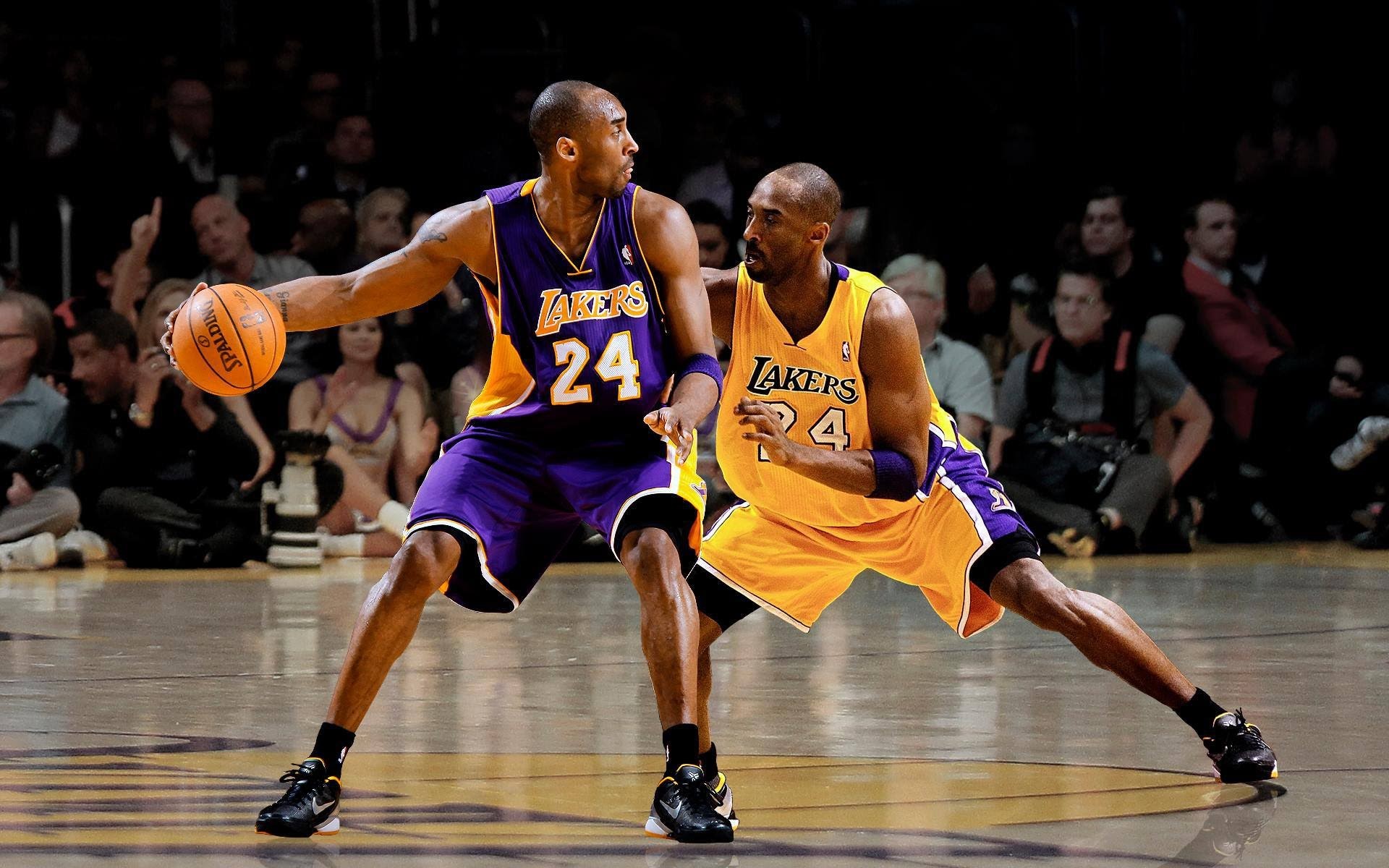 Kobe was an 18 time NBA- All Star selection, eight as #8 and 10 as #24. The only years he wasn’t an All-Star were during his rookie season in 1997 and in 1999 when there was no such game because of the NBA lockout. While he had more All-Star game appearances as #24, he became the youngest NBA All-Star ever when he was wearing #8.

But stats don’t tell the whole Kobe Bryant story. He won five NBA titles over the course of his career. He won three straight titles from 1999-2001 and then another two- back to back during the 2009 and 2010 seasons. Each title run had its own story to tell, and both equally legendary.

Bryant’s first three titles were played alongside Shaquille O’Neal, the most dominant big man in this generation. With coach Phil Jackson coming over from the Chicago Bulls, the Lakers won their first three peat since 1954. When O’ Neal left for Miami, many doubted if Kobe could lead the team on his own. But he proved them wrong.

In 2008, the Lakers traded for Spanish big man Pau Gasol. It was a trade that would change the Lakers’ destiny. Gasol was no Shaq but with an All-Star center, Bryant would reach the peak of his powers and help the Lakers win back to back titles in 2009 and 2010. 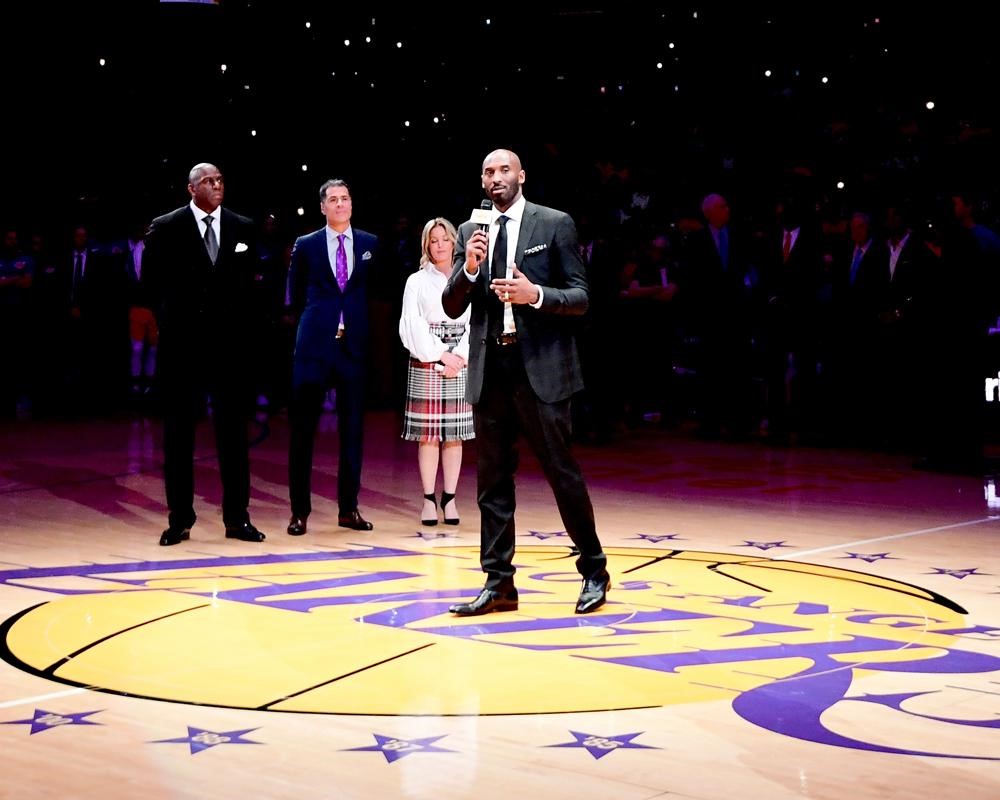 “It’s really, really tough for me. I think 24 was more challenging, and I tend to gravitate to things that are harder to do. And physically for me it was really, really hard to get up, night-in and night-out, man. It’s a grind. Taking on the Boston Celtics (in the Finals). Having a bone fragment in my foot during that series. Having a broken finger. Muscling through that back half of the career, some of the toughest stretches of basketball ever, man. And so, I guess if you forced me to pick one, I’d probably go with No. 24 because of that.”

Kobe won his only MVP award in 2008 and he was named as NBA Finals MVP in 2009 and 2010. He was selected to the All-NBA First team eight times as #24 and thrice as #8. Kobe was NBA All-Defensive First team four times as #8 and 5 times as #24. He also won three All-Star game MVPs with #24 and one as #8. If you look at individual accolades, #24 had more although it’s hard to forget the fact that #8 won him his only Slam Dunk title and one more NBA championship ring.

The Journey Not The Destination 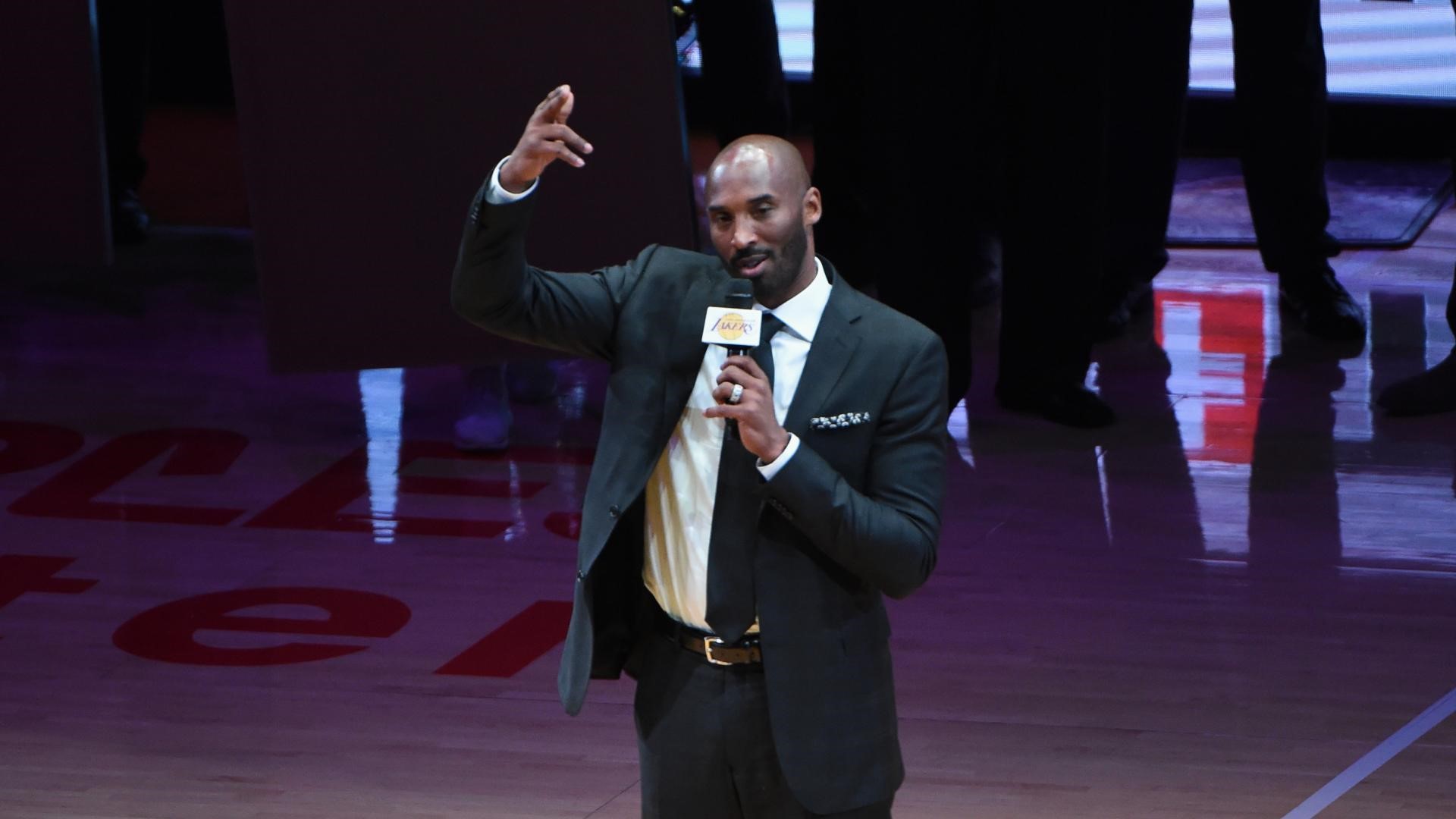 It’s unlikely that the Lakers will give Bryant two statues outside Staples Center. Forced to choose, his answer gravitated towards #24. But that doesn’t mean that he concludes that #24 was better. For Bryant, it was never about the destination but it was about the journey. Speaking to his daughters, Bryant said:

“Lastly our daughters, Natalia, Bianca and Gianna. You guys know that if you do the work, you work hard enough, dreams come true. You know that, we all know that. But hopefully what you get from tonight is that those times when you get up early and you work hard; those times when you stay up late and you work hard; those times when don’t feel like working — you’re too tired, you don’t want to push yourself — but you do it anyway. That is actually the dream. That’s the dream. It’s not the destination, it’s the journey. And if you guys can understand that, what you’ll see happen is that you won’t accomplish your dreams, your dreams won’t come true, something greater will. (Points to the rafters). And if you guys can understand that, then I’m doing my job as a father.”

Kobe Bryant’s career was defined by two eras. One was a great as the other. Both worthy of Hall of Fame status. Choosing which version of Kobe Bryant is a tough call, even for the man himself. The player who wore #8 was an entirely different beast from the one who donned #24. But one would have never existed without the other. All together, they represented Kobe’s journey from a high school phenom to the third leading scorer in NBA history and one of the game’s greatest. Both defined the career of the greatest Los Angeles Laker ever.