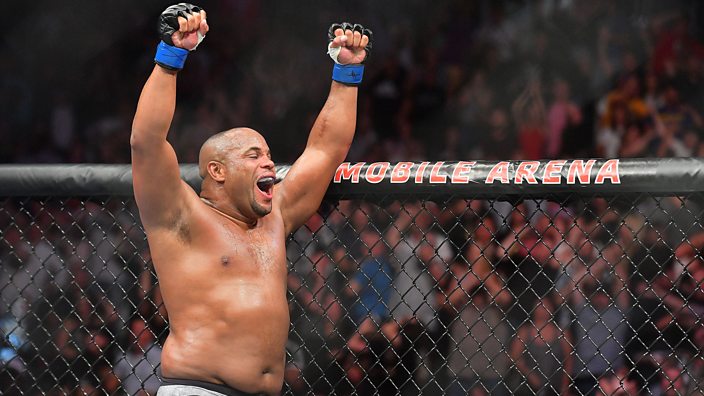 Who Should Daniel Cormier Fight Next?

Daniel Cormier wrote a piece of history last weekend when he knocked out Stipe Miocic to win the UFC heavyweight title. With the win, DC becomes the fourth fighter in the history of the promotion to win titles in two different weight classes, joining Randy Couture, B.J. Penn and Conor McGregor. Cormier also becomes the second fighter in history, after McGregor to simultaneously hold two different titles. But while Cormier is basking in glory, fans are already talking about his next fight.

UFC President Dana White wasn’t shy about his preferred next opponent for DC, who has declared that he will retire next year. Cormier also talked about his next fight and hinted that he wants a big money fight instead of fighting the people on top of the rankings. Cormier has said that he wants to fight twice before he hangs up his gloves in March 2019 and he talked about fighting Shogun Rua possibly in November and before his swansong fight next March.

But Cormier’s planned November bout is off the books as he was recently issued a six month medical suspension following UFC 226. Because of that, Cormier is likely down to his final UFC bout, that is if he is making good on his statement to retire next March. But who will DC fight next?

Here are the five best names that come to mind: 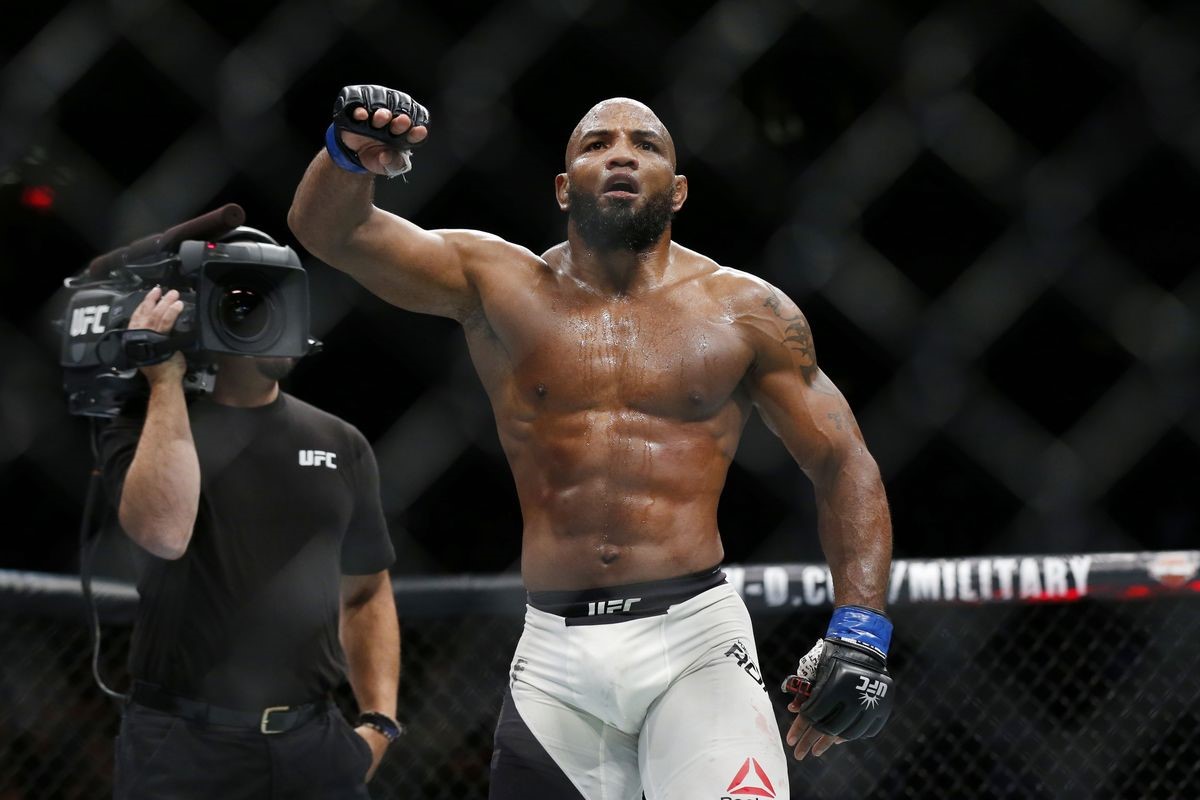 Yoel Romero’s name remains hot in the news after his performance against Robert Whitaker at UFC 225. He may have lost via razor thin split decision but he gave a good account of himself after knocking down Whitaker twice in that rematch. In their first bout, Whitaker defeated Romero via unanimous decision at UFC 213 to win the interim middleweight title. Whitaker would later be promoted to full fledged champion after Georges St. Pierre returned to retirement after dethroning Michael Bisping.

Romero has missed weight in his last two fights thereby missing the opportunity to win the interim belt against Luke Rockhold at UFC 221 and the chance to win the title against Whitaker last month. With the Soldier of God getting up there in age (he’s 41 years old already), making 185 pounds may have become more difficult than ever. So after his loss to Whitaker at UFC 225, a lot of people urged him to move up to light heavyweight.

1 ranked light heavyweight Alexander Gustafsson expressed willingness to welcome Romero to 205 pounds. On Tuesday, Romero’s manager Malki Kawa announced that the former Cuban Olympian will indeed move up in weight class. However, because Romero needs surgery on his orbital bone which he hurt at UFC 225, Romero couldn’t accept a fight with Gustafsson at UFC 227 which is scheduled for August 4, 2018. Instead, Gus will be fighting Volkan Oezdemir on that night. As for Romero, Kawa said that he would be ready late this year and given DC’s six month medical suspension, their timetables would allow a showdown early next year. 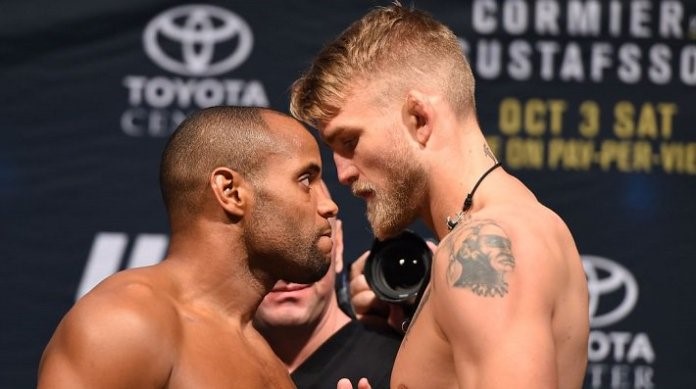 When Jon Jones was first stripped of his light heavyweight belt, Daniel Cormier won the vacant title by submitting Anthony ‘Rumble’ Johnson at UFC 187. In his first defense of the belt, Cormier fought Alexander Gustafsson at UFC 192. The Swedish Mauler was two fights removed from taking Jon Jones to his limit at UFC 165.

Cormier defeated Gustafsson via split decision but after the fight, Cormier told reporters that he felt that Gus beat him up. In fact, DC admitted that it ‘was the worst he’s ever been beat’. And yet, he won that fight. Or did he? Gustafsson completed two takedowns in round two and knocked down Cormier at the end of round 3. Cormier won via scored of 48-47, 49-46 and 47-48.

Since that loss, Gustafsson has won two fights in a row, defeating Jan Blachowicz via decision at UFC Fight Night 93 and knocking out Glover Teixeira at UFC Fight Night 109. Gus is scheduled to meet Volkan Oezdemir next month. If the Swedish Mauler comes out of that event with a big victory, then he solidifies his #1 ranking at 205 pounds. Many will question why Gustafsson needs to be given another crack at DC but remember that aside from Cormier’s twin losses to Jon Jones (one has been overturned), the only man to give him a fight (and beat him up) was Gus. 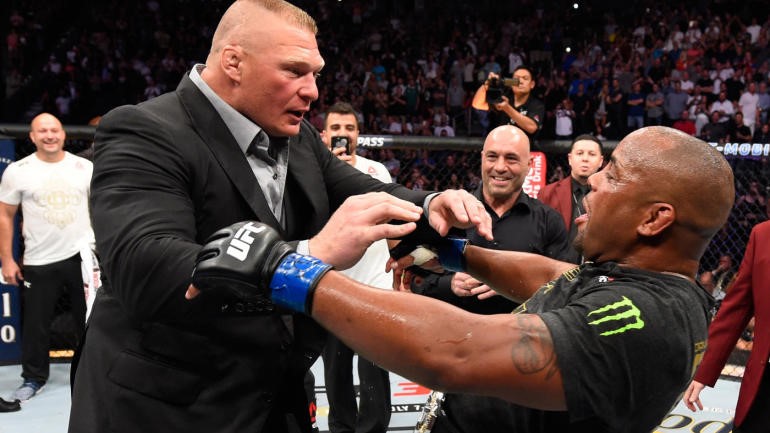 Brock Lesnar made a scene at the end of UFC 226. During Daniel Cormier’s post fight octagon interview, the newly crowned UFC heavyweight champion called out the Beast Incarnate. In a scene that could easily be mistaken for a WWE storyline, Lesnar obliged and entered the octagon. But instead of exchanging pleasantries, Lesnar shoved Cormier, causing a little commotion. DC pushed him back and the two exchanged trash talks. Meanwhile, you could see Joe Rogan in the background, smiling, as if he knew that would happen.

After the incident, UFC President Dana White confirmed that they “will definitely make Cormier vs Lesnar” although he set not date. That didn’t come as a surprise really, because Lesnar has been teasing about returning since last year. Lesnar returned to the UFC by defeating Mark Hunt at UFC 200 but the victory was overturned after he tested positive for a banned substance. Brock’s one year suspension ends this month but because he only re-entered the USADA testing pool last July 3, 2018, he will be eligible to fight again on January 8, 2019. Again, given that DC has a six month medical suspension, the timetable for a fight with Lesnar is just perfect.

For the UFC, Lesnar would be the perfect fight for Cormier. That’s because the promotion has been bleeding for PPV buys ever since Conor McGregor took a hiatus. We all know that Brock Lesnar was the UFC’s top PPV draw before McGregor arrived in the scene so getting him back on TV would be the best way to perk up the UFC’s numbers. The question here though is why the UFC would allow someone who isn’t ranked and someone who is coming off a USADA drug suspension is getting the first crack at Daniel Cormier. Many hardcore fans would rather see DC fight who’s on the rankings rather than Lesnar who has no claim to a title shot except that he is going to earn the UFC the most money. But then again, that’s why they are in business for, right? 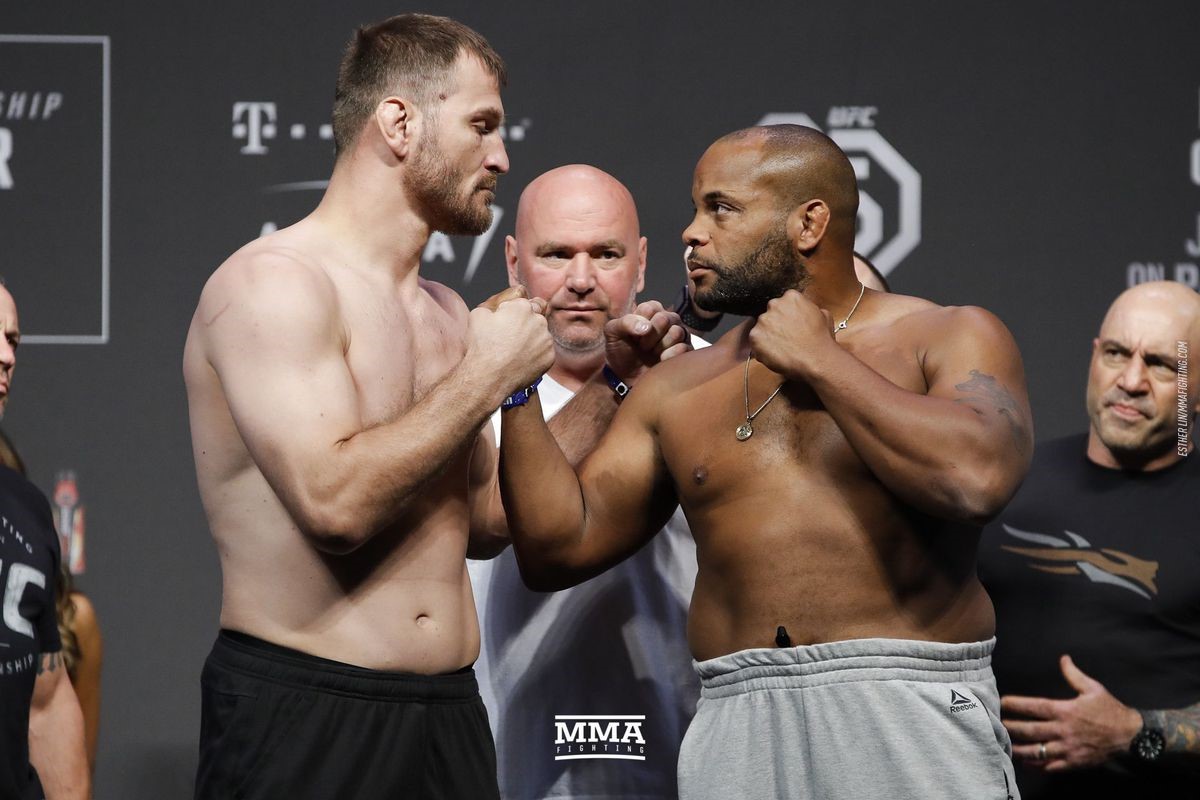 Stipe Miocic entered UFC 226 having defended the UFC heavyweight title more than any other champion in the promotion’s history. Miocic won the belt by knocking out Fabricio Werdum at UFC 198. He went on to defend the belt successfully three times before losing it to Daniel Cormier at UFC 226. Miocic knocked out Alistair Overeem at UFC 203, stopped Junior Dos Santos at UFC 211 and then dominated Francis Ngannou via five round unanimous decision at UFC 220.

Miocic was favored to win at UFC 226 and early on, he was having his way with Daniel Cormier. Miocic was able to land on DC but he was never able to hurt the light heavyweight champion so as the fight went on, Cormier got more and more confident in the stand up game. It also helped that Cormier’s tactic of leading with his open hand made Miocic a little wary about getting poked. In fact, Cormier got several verbal warnings from referee Mark Goddard about poking DC and the fight was even halted just a couple of seconds before the knockout after Cormier finally nailed Miocic’s eye. Whether the poke was intentional or not is another story. Miocic didn’t complain about it after the fight. Cormier caught him after a clinch and that was all she wrote.

During the post fight press conference, Miocic preferred to talk about going home to his family rather than talk about the fight. One day after losing the belt though, Miocic congratulated DC and asked for a rematch before DC retires. Miocic said that he is more motivated than ever to get back on top. Cormier replied to Miocic’s tweet but it didn’t sound like he was interested in a rematch. We know that Cormier is planning to retire in March. He wants to get a fat retirement pay before he heads into the sunset. You can’t blame him though. 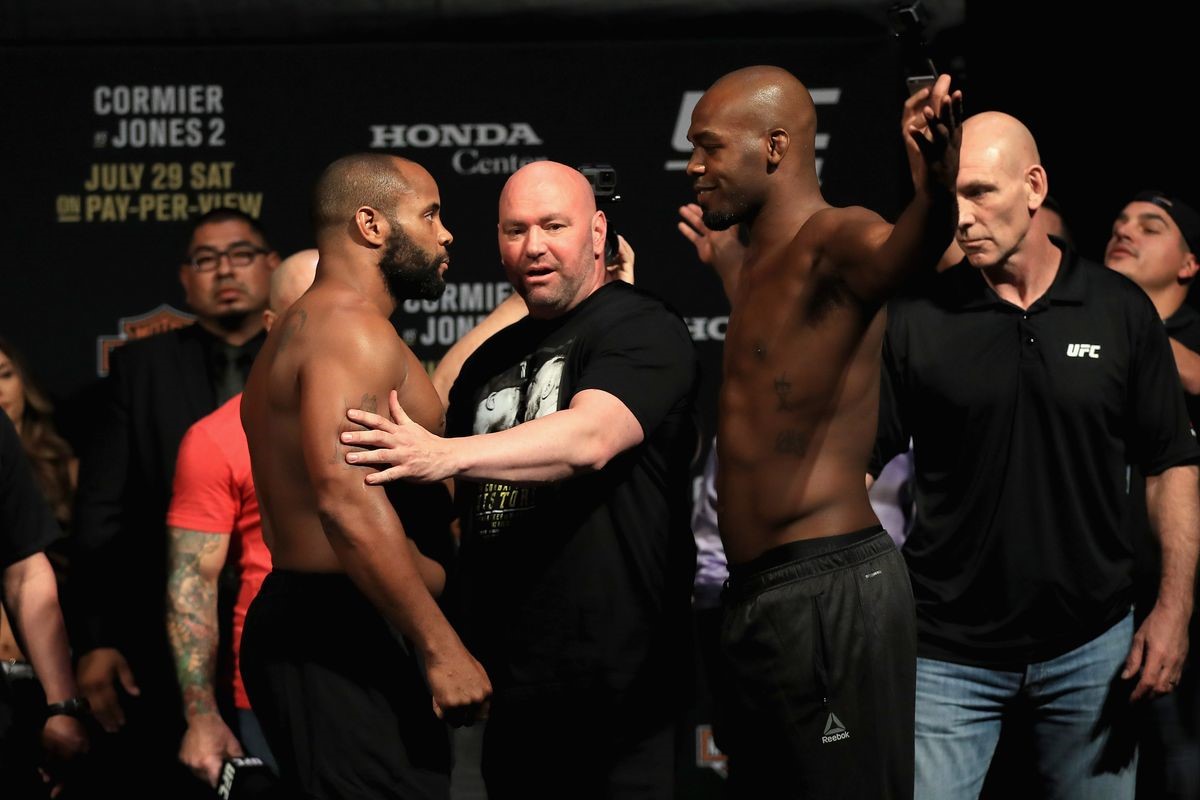 We’ve already talked about four very good opponents for Daniel Cormier. But the best fight out there for DC would be Jon Jones. Sure, Jones has beaten him twice before but one of those wins has been overturned to a no-contest after Bones tested positive for the banned substance turinabol. Cormier now claims that Bones was doping all along and considers the result of their first fight as also questionable. But we can’t really say that for sure because USADA wasn’t around at that time. So to settle the issue, why not get a clean Jon Jones inside the octagon with Daniel Cormier one more time? Sounds like a good idea.

The catch here is when will Jones be eligible to fight again, if ever. Jones latest drug case is still in the hands of the USADA which has yet to decide on his fate. Jones’ manager is confident that his fighter can return at the end of 2018 but if the USADA drops the hammer on Jones, then he may not catch the Cormier bus before it signs off in March 2019. If Jones gets an earlier return, the better it will be. In fact, Jones has teased about fighting DC again after he recently welcomed him to the ‘club of champions’ and wondered which weight class he’d like to “whoop his ass again”.

We aren’t sure if Cormier is willing to face Jones again, especially with all the mental troubles that Jones has caused Cormier’s life, both professionally and personally. But Jones’ name will always hound DC unless he beats him inside that octagon. While Cormier is now a two division champion, he never really won the 205 belt inside the octagon. He won both after Jones was stripped twice of the title. Cormier has claimed that he is the G.O.A.T of mixed martial arts but the only way for him to be even included in that conversation is if he beats Jon Jones inside the UFC octagon. Nor more, no less.