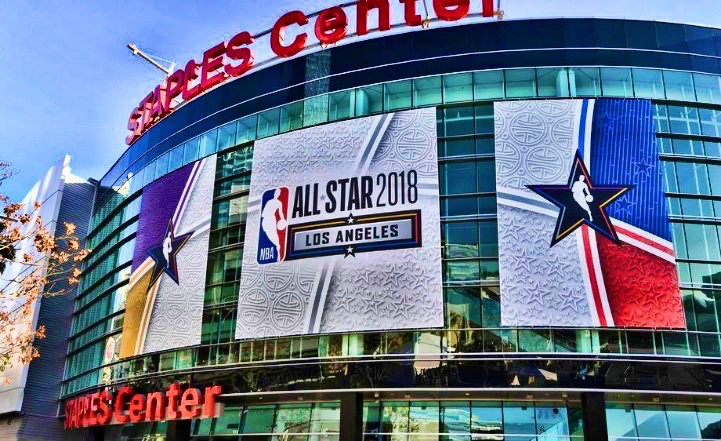 Who Stole The Show In Every Event at the 2018 NBA All Star Weekend?

The NBA’s annual mid-season classic is underway. Two days are done with the biggest event of the weekend still to come.

The stars came out in full force. Of course, this is L.A. where Hollywood is. But apart from the hollywood stars and the countless celebrities that trooped to Staples Center, there were participants of the events that literally stole the show in Tinseltown.

Let’s take a look at the events, one by one, and see which names became the stars among stars:

Quavo and pop sensation Justin Bieber were the latest additions to the All-Star Celebrity Game and they provided the first highlight of the game: Bieber chasing down Quavo on the fastbreak with the 25 year old member of Migos finishing strong over the Biebs.

That basket would set the tone for Quavo who literally stole the show. Quavo won MVP honors after scoring 19 points on 7-10 shooting while grabbing 5 rebounds and issuing 3 assists for Team Clippers who won the game 75-66. Bieber? He won MVP honors in 2011, the last time the game was played in Los Angeles but could only manage 4 points in 13 minutes of action.

That basket against Bieber wasn’t the only highlight of the night for Quavo. In one play, the rapper took down Rachel DeMita after blocking the NBA2KTV host’s shot. Speaking of DeMita, she also took center stage after scoring a total of 17 points on a wide array of shots.

In case you were wondering how a TV host/model/actress plays so well like her, well DeMita’s basketball skills were good enough to earn her an athletic scholarship at Old Dominion. So yeah, that girl has college basketball experience. Still, she got her shot blocked by the MVP. So who says there’ no defense in these all-star games?

Finally, it was nice to see Nate Robinson finally looking over someone in a basketball game. Yep, Krypto-Nate has always looked up to his NBA opponents but for this game, he was towering over well, 12 year old actor Miles Brown. Great to see that for a change, really.

The rest of the world may have already caught up with Team USA. For the third time in four games, Team World beat Team USA in the Kickstart Rising Stars game which featured 10 international rookie and sophomore players against 10 first and second year players from the United States.

The difference was obvious. Team World could shoot the three. Team USA could not. In the end, the world team knocked down a total of 23 three pointers against Team USA’s 11 triples. The difference of 12 three pointers made accounted for 36 points. Team world won by a winning margin of 31 points, the largest in the game since 2007.

Bogdan Bogdanovic won MVP honors with 26 points including 7 triples. He and Sacramento Kings teammate Buddy Hield who led all international scorers with 29, stole the show and took the fight away from their American rivals who were led by Jalen Brown who scored a game high 35 points.

In the end when the everything but the score was settled, the game turned into a dunk contest. For sure, the Americans led by Donovan Mitchell, Jayson Tatum, Dennis Smith Jr. and Kyle Kuzma had the flashier and more powerful dunks. But they counted for just two points unlike Bogdanovic’s long bombs which counted for three.

Ben Simmons also dished off 13 assists for Team World while his Sixers’ teammate Dario Saric added 4 three pointers. Joel Embiid, the only player to play in the Kickstart Rising Stars and 67th All-Star game finished with just 5 points but his drive, spin and dunk play in the fourth period was probably the play of the game.

Dinwiddie had to come from behind to beat Buddy Hield in the first round and Jamal Murray in the second round. In the finals though, Lauri Markkannen missed his pass and gave Dinwiddie the lead he would not relinquish. After missing on his first three point attempt, Dinwiddie nailed his second attempt to win the tournament.

Dinwiddie was a surprise winner as better three point shooters like Lou Williams and Jamal Murray were expected to win the contest as favorites. Unfortunately, the two were bracketed against each other in the first round, with Murray coming out victorious.

The big man field was interesting because Andre Drummond has made only 5 career three pointers including none this season ( 0-6 ). But he nearly beat Markkanen in round one with the Chicago Bulls rookie hitting his three point shot just a split second ahead. Had Drummond won that round, that would certainly have stolen the show, win or lose in the next round.

Joel Embiid came from behind to beat Al Horford in round one but missed a pass in the second round and got beaten by Markannen in the second round. In the end though, it was a big victory not just for Spencer Dinwiddie but for the struggling Brooklyn Nets franchise.

Shooting before his new hometown crowd in Los Angeles and with team owner Steve Ballmer watching, L.A. Clippers guard Tobias Harris set the tone for the 2018 JBL Three point contest. Harris was the first shooter and he came up with 18 points, which later ended up as the third highest score in round one.

The shooters came out cold in round 1 with no one making 20 points. Devin Booker and Klay Thompson, two of the favorites in the contest, led the way with 19 points. Paul George of the OKC Thunder, whom the L.A. crowd have been wooing for weeks now, could only muster 9 points.

George and Kyle Lowry from 2017 are the only players to score below double digits since the money ball rack was added. Lowry hit double digits this year but his 11 wasn’t enough to put him in the finals. Defending champion Eric Gordon made a quick exit after a 12 point first round.

But the night belonged to Devin Booker who scored an all-time high of 28 points in the finals. Klay Thompson had an excellent round with 25 points but that wasn’t enough to beat the score of Booker. As with the Skills Challenge competition, the night belonged to a franchise on their way to the NBA Draft lottery next offseason.

There were some theatrics, as usual. Victor Oladipo? No, he didn’t sing this time around, he borrowed Chadwick Boseman’s Black Panther mask but then there was nothing superhuman about his dunk anyway. You can click here if you want to watch Round 1 and Round 2).

Larry Nance Jr. brought back performer Quick Change and changed outfits. Nance’s change of costumes wasn’t as quick though. When he came out, he was wearing what his daddy wore when Sr. won the 1984 NBA Slam Dunk contest. On his first dunk though, he found out that his dad’s cradle dunk wasn’t as easy. Nance made the finals with a 50 on his second dunk, a 180 windmill from the baseline.

Donovan Mitchell changed jerseys a couple of times. First he paid tribute to Utah’s Dr. Dunkenstein when he wore Darrelll Griffith’s #35 in one of his dunks of the first round. Then for his final dunk of the contest, he changed to Vince Carter’s Toronto jersey and replicated Vinsanity’s winning dunk and pose after the dunk.

Mitchell won the contest by two points 98-96 but it was Nance’s final dunk that was the most creative of the night and perhaps one of the most creative in years. The Cavs forward threw the ball off the backboard, caught in and threw it to the backboard a second time before finishing with a two handed slam. That gave him his second 50 of the game but his 46 score on his first dunk of the finals cost him the title.

With All-star Friday and Saturday done, all that’s there to look forward to is Sunday’s 67th NBA All-Star Game. While we know who stole the show on Friday and Saturday, we’re interested to find out who is going to be the star of stars on Sunday night.

Anytime you have Russell Westbrook in a game, he’s a guy to look out for. From the way he dresses coming to the venue to his attire during post game interviews, Russ is the man to watch. In between both, Westbrook is also a can’t miss phenomenon. He plays like there is no tomorrow and leaves no prisoners.

Westbrook always treats every game like a championship game. He treats every play like his career depended on it. Not only does he want to win, he wants to win in style. There isn’t an OKC game where there is no Russell Westbrook highlight. Whether it’s a dunk where he abuses the rim or a dagger game winning basket, Russell Westbrook is a walking highlight reel.

Westbrook has played in 7 All-Star games and has been named MVP in two of them. In fact he won back to back All-Star game MVPs in 2015 and 2016. Russ scored 41 points with 7 three pointers during the 2017 NBA All-Star game. Had Anthony Davis not scored 52 points and play in his hometown, Westbrook could’ve easily had three consecutive All-Star game MVPs.

Aside from Westbrook, there is only one other player who has the desire to dominate every game he plays and that’s the Milwaukee Bucks’ unicorn Giannis Antetokounmpo. Like Westbrook, The Greek Freak likes to attack the basket with full authority. He finishes with plenty of flare and a lot of power. Watch the Greek Freak’s highlights here.

So who’s gonna steal the show and be the MVP in the 67th NBA All-Star Game? We’re picking Westbrook from Team LeBron or Giannis from Team Steph. What do you think?