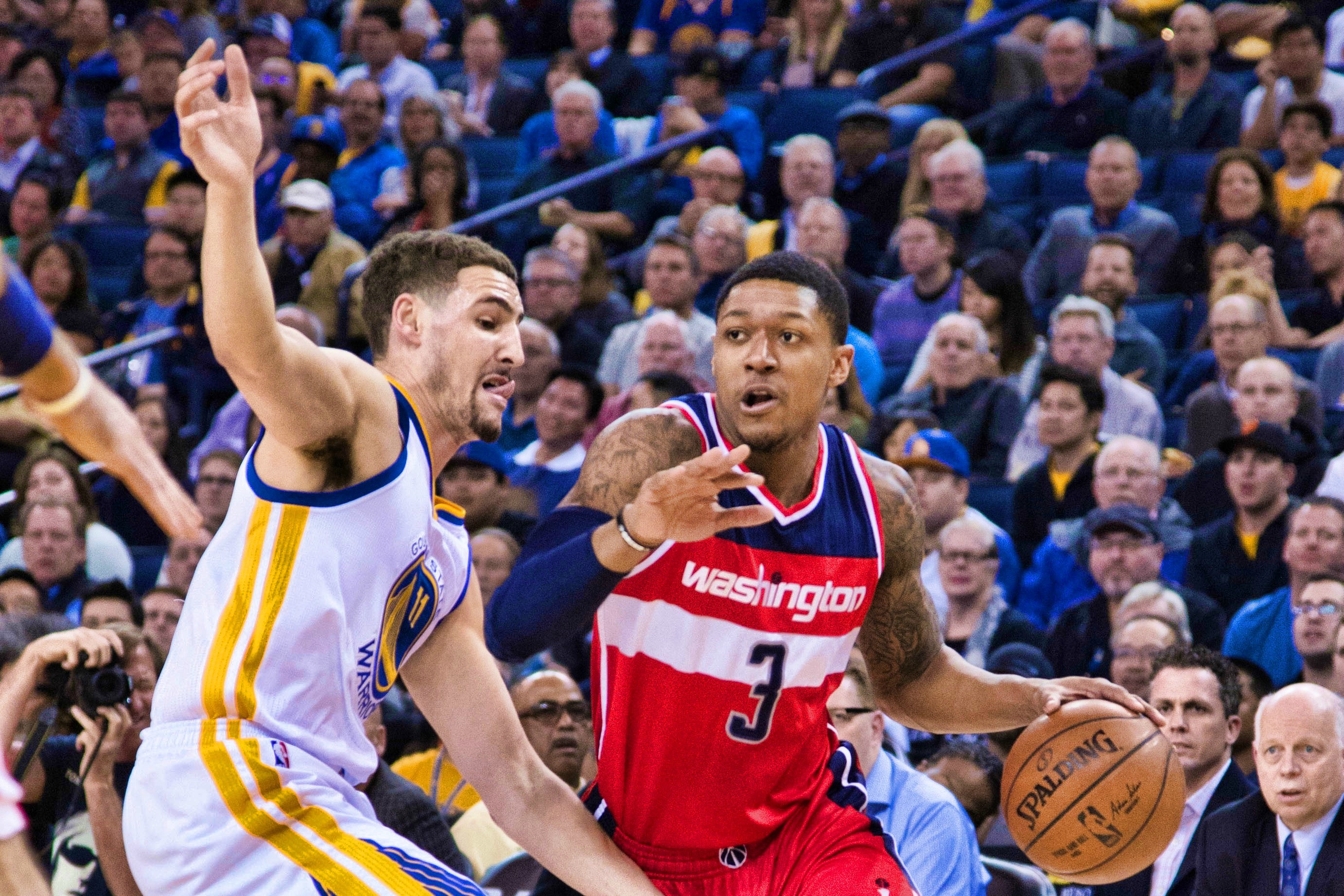 The Golden State Warriors beat the Washington Wizards in Wednesday 109-101 in a match-up that featured two of the best shooting guards in the business.

Golden State was fast out of the gates and erected a 36-21 lead at the end of one quarter. Washington stormed back in the second period and outscored the Warriors 35-22 to cut the deficit to two at halftime. But the Warriors broke the game wide open again in the third quarter and they never looked back from there. 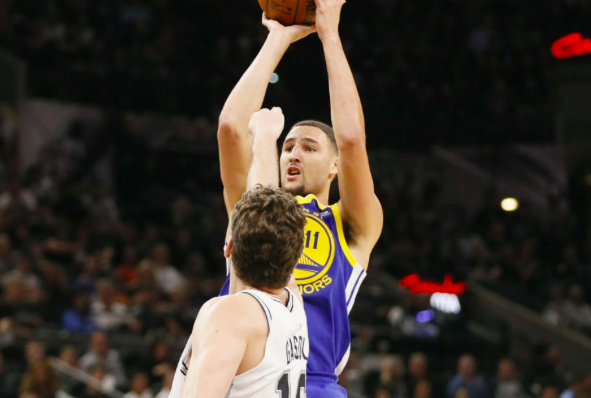 According to ESPN's ELIAS Sports Bureau, the Warriors have been the most dominant third quarter team in recent history. The report says that since the start of the 2014-15 NBA season, the Dubs have outscored their opponents by 1,349 points. This season, the Warriors have outscored their opponents by 330 points in the third period.

Wednesday night wasn't any different. A game after the Warriors opened the third quarter with an 11-0 run against the Knicks and built a 20 point lead at the end of three quarters, Golden State exploded with a 16-4 bomb coming off the halftime break versus the Wizards.

Wizards head coach Scott a Brooks had an explanation for the Warriors’ quick start to third quarters:

" You could easily start off with saying that they have four All-stars. That's a pretty good start. They should have a pretty good 'every' quarter." 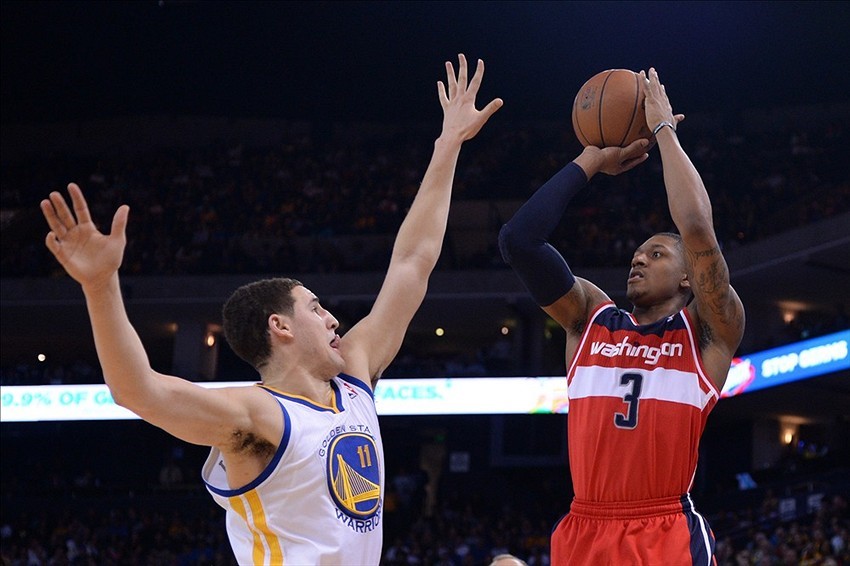 Brooks is correct. But if we go to the specifics, it was Klay Thompson's defense which was key in the Warriors' win over the Wizards. Thompson, usually gets the tough defensive assignment night in and night out. Usually, he gets the job done. Wednesday night was no different. Klay's assignment? The Wizards' sweet shooting guard Bradley Beal.

Beal is the Wizards' leading scorer this season at 23.7 points per game. Against Thompson's defense on Wednesday, he missed his first nine shots and went scoreless in the first half. Beal's first basket of the game came with under six minutes left in the third quarter. Said Beal:

"They took a lot of my shots away. They doubled. They switched. Their main objective was to take the ball out of my hands."

Precisely. But while Beal kept on saying "they", it was Thompson who primarily took Bradley Beal out of his comfort zone. Beal finished the game with just 8 points, his fifth lowest scoring output of the season. He shot just 3-15 from the field, including 2-8 from beyond the three point arc, in 37 minutes of action. The 24 year old was a -14 in the game for the Wizards. 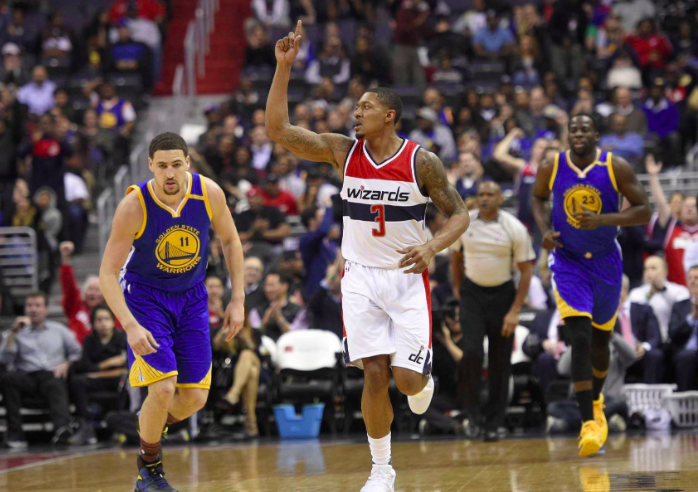 Thompson himself didn't have a big game, offensively. He scored 13 points in 5-11 shooting, including 3-6 from the three point area in 35 minutes of playing time. The former Washington State product is averaging 20.0 points on 15.8 shots per game this season. But of course, scoring is the least of Thompson's worries, with his three All-star buddies around.

Beal meanwhile, is having a career year in terms of scoring. Especially with John Wall hurt, Beal has taken the scoring cudgels for the Wizards. Prior to Wednesday, Beal had averaged 24.0 points in four games after the All-star break. With Wall out with a knee injury, Beal has also assumed some play making duties. His assists average is up to 6.8 per game in the month of February 2018. He was averaging less than four dimes per game in the first three months of the season.

But who is better between the two? Let's find out: 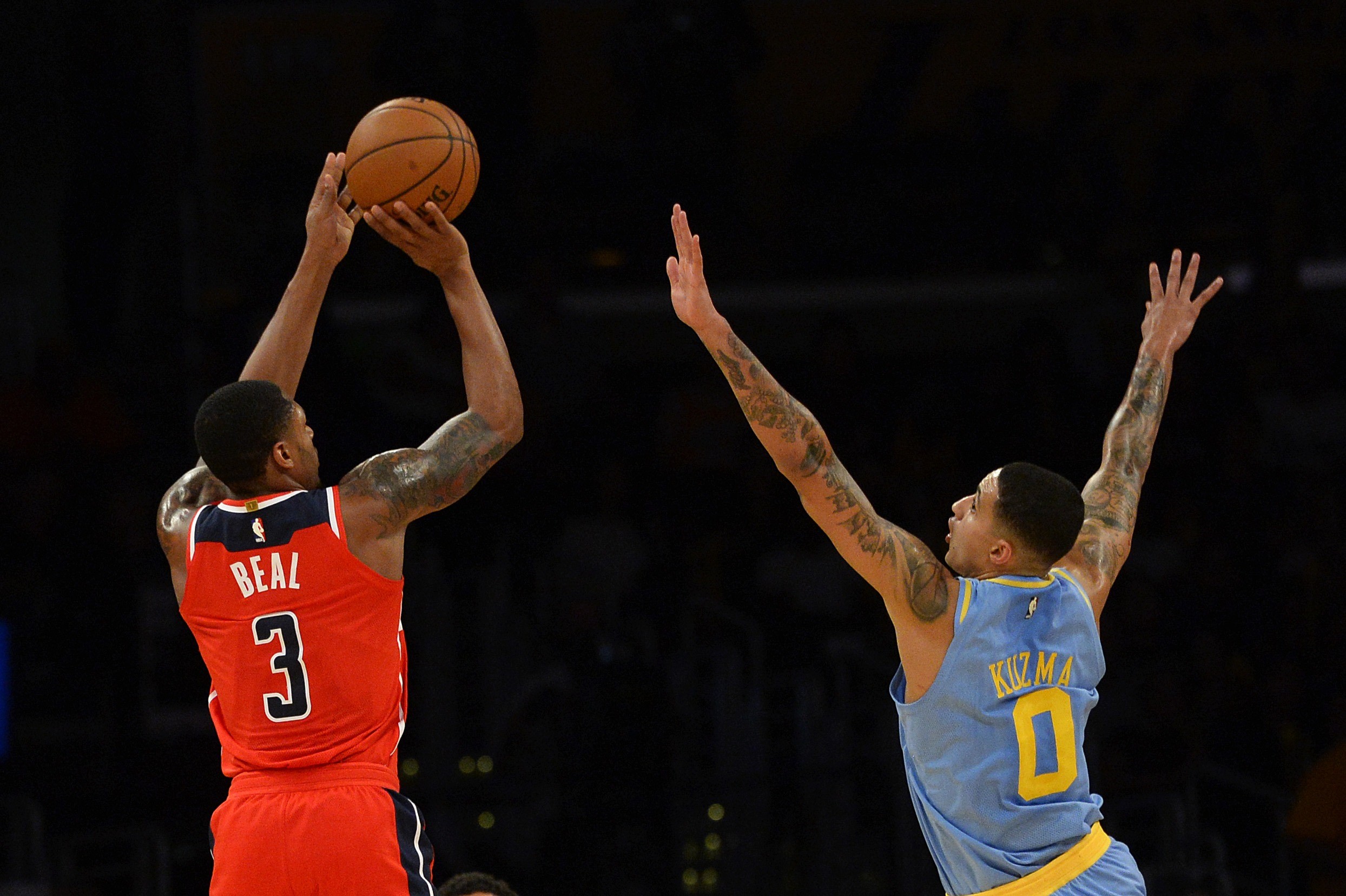 As we said, both players can shoot the three and score big. However, both play different roles in their respective teams. Beal is the Wizard's chief gunner this season, averaging 23.7 points per game on .465 field goal shooting, .375 from behind the three point region and .793 from the foul line. He is averaging 2.4 three pointers per made per game.

Klay Thompson is half of the Splash Brothers of Golden State. But since the arrival of Kevin Durant last season, Klay has been relegated to the third option on the Warriors' offense. Despite that, he is still averaging 20.0 points per game on .494 from the field, .447 from behind the arc and .840 from the free throw line. Klay makes 3.2 three pointers per game for the Warriors.

As for playmaking, Beal has the better assist numbers 4.4 per game. This year. Thompson meanwhile is averaging just 2.6 assists this season. Career-wise, Beals numbers are still better in this department at 3.3 against 2.3 assists per game. Beal's playmaking has been proved especially since the Wizards are currently without John Wall. He's increase his assists average to 6.7 per game in the month of February 2018.

We said the difference is due to their roles on their teams. But if we look at offensive rating, Klay Thompson is way better at 114.6 points per 100 possessions while Bradley Beal is at 108.3 points per 100 possessions. If roles are the same, maybe Klay has better scoring numbers. But their roles are not and Beal is producing more ( but not much ). So We’re giving this to Bradley Beal for more production and playmaking. 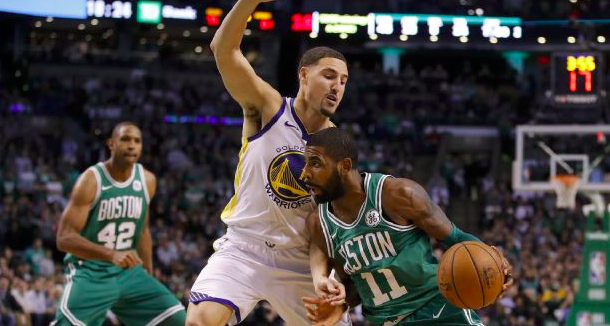 Klay Thompson's defensive numbers are deceptive. He only averages 3.9 rebounds, 0.7 steals and 0.6 blocks per game this season. Despite that, he is known as one of the best on-ball defenders in the NBA and one that has a reputation of shutting down the opposing team’s top player - just like what happened to Beal on Wednesday.

Based on reputation, this is a mismatch in favor of Klay Thompson. Taking into account the statistics though, Bradley Beal has better numbers but isn’t necessarily the better defender. We’ve seen Klay shut down opponents like he did Beal on Wednesday. Beal is more consistent on a game to game basis. But when they need him to stop the opponent’s best offensive weapon, Thompson always delivers, especially on the big stage. Defense was supposed to be an easy category win for Klay Thompson. Instead, we think it’s a close call but still in Klay’s favor.

Bradley Beal has been equally impressive in the playoffs. His career playoff averages are 22.6 points, 4.5 rebounds, 3.9 assists and 1.6 steals per game. His field goal percentage is lower though at .437 and his three point shooting accuracy is .341. Beal is a career .817 from the charity stripe in the postseason.

Thompson's career playoff numbers are 18.8 points, 3.3 rebounds, 3.9 assists and 0.9 steals per game. He is a .432 field goal shooter, .404 marksman from the three point territory and a .824 foul line shooter in the playoffs. Like Beal, his numbers are slightly lower in the postseason.

The main difference though is that Thompson has played in 230% more playoff games than Bradley Beal. Klay has gone deep in several playoff appearances while Beal hasn't gone to the Conference Finals yet. Klay has gone to the Finals in the last three seasons and has won two NBA titles of course, he plays for the Warriors so that's a huge edge. 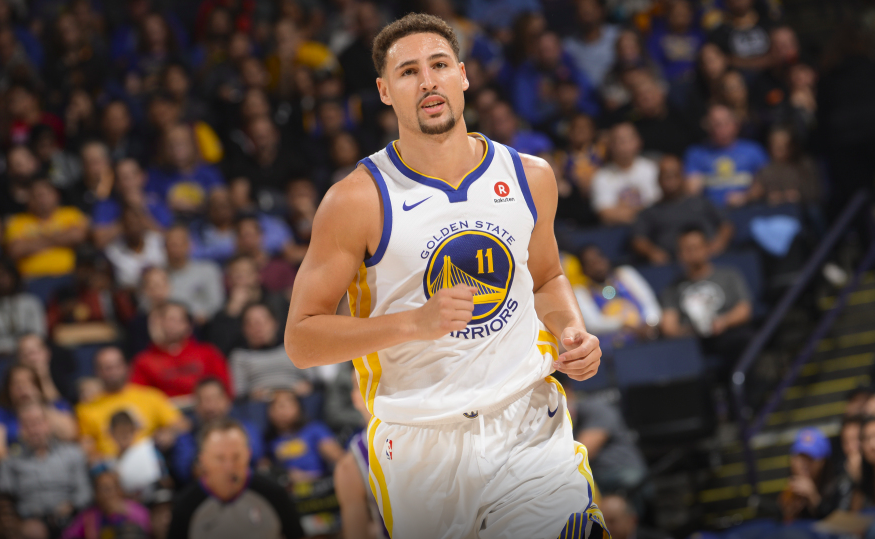 As we said, Klay has the edge in championships, 2-0. And rings are all that matter really. The Wizards and Warriors have two of the best backcourts in NBA history. But the Warriors have always had the deeper and much more talented team. But that's not Klay's fault.

Going to individual achievements, Thompson also has the edge in All star appearances. The son of former Laker Mychal has made four appearances in the NBA's midseason classic. Meanwhile, Beal made his first All star gsm appearance this season.

It's surprising that Thompson hasn't made an All NBA defensive team heat, given his prowess on the defensive end of the court. But he's been named to two All-NBA 3rd teams already. He got those accolades in 2015 and 2016. With Durant arriving in 2017, his production with the Warriors has decreased but not his value.

Beal hasn't been named to an All-NBA team or All Defensive team. He can possibly clinch a spot in the former but unlikely in the latter. At 24, he is four years Klay's Junior so you can always say he can catch up in due time. But at present, it's Klay Thompson who has more NBA accolades and has the better resume. 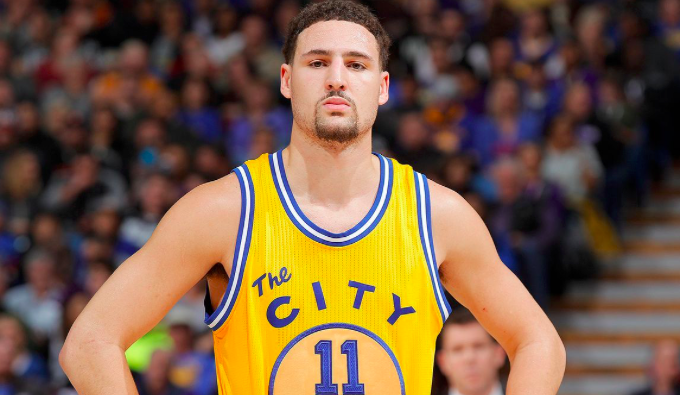 Bradley Beal and Klay Thompson are two of the best shooting guards in the game today. Beal is the more productive scorer this season but that's because of his role more than anything else. While he isn't taking as many shots, Thompson is more efficient. There's not much that separates them offensively, except that Beal may be the better playmaker and Thompson the better shooter.

Defensively, this mythical match-up is a surprise. Bradley Beal has better defensive numbers this season. Except for defensive rating, numbers say that Beal is the better defensive player than Thompson. We don’t want to believe this but the figures don’t lie. However, the difference in numbers is almost negligible and we still argue that Klay has the lockdown ability that Beal doesn’t possess.

Thompson is also the proven playoff performer. He's been there and done that. Beal hasn't been near what Klay has accomplished in the league. He is a more proven player than Beal, especially in the postseason. After this lengthy discussion, we're picking Klay Thompson over Bradley Beal.