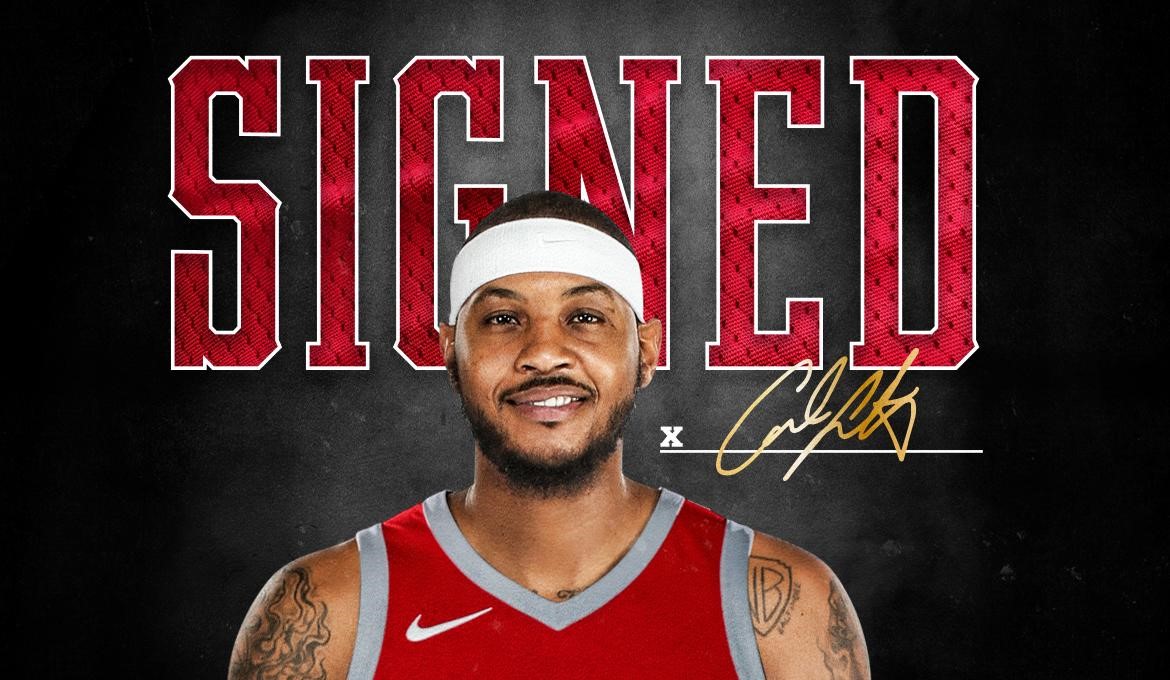 Will A Starting Role Be An Issue With Melo In Houston?

Carmelo Anthony officially became a member of the Houston Rockets on Monday as the 10-time All-Star signed a one-year deal worth $2.4M.

The move is seen to upgrade the Rockets firepower. With Houston losing two key contributors in free agency, the addition of one of the best offensive players in recent memory should more than make up for that. Also, Anthony will be joining good friends Chris Paul and James Harden on a team that had the best record in the entire league during the regular season.

But while everything with Melo going to Houston sounds very positive, there may be one hitch though. Back when he was with the Oklahoma City Thunder, Anthony declined to come off the bench. It can be recalled that during the OKC Thunder media day last season, Melo infamously said “Who me?” when he was asked if he would be willing to come off the Thunder bench.

Anthony got what he wanted and he gave the Thunder the worst season of his 15 year NBA career. Anthony started all 78 games he played for the OKC Thunder last season, averaging 16.2 points, 5.8 assists and 1.3 assists per game while shooting just 40.4 percent from the floor.

Last season was the first time where Anthony has averaged less than 20 points per game in a single season. Aside from posting a career low in scoring average, Anthony’s field goal shooting percentage and assists per game average were also the lowest of his career. As if those weren’t bad enough, Anthony’s 2018 postseason numbers were even worse.

Against the Utah Jazz in round one of the 2018 Western Conference Playoffs, Anthony averaged only 11.8 points, 5.7 rebounds and 0.3 assists per game. He only shot 38% from the floor and just over 21% from behind the three point arc. The 5th seeded Jazz ousted the 4th ranked Thunder during the series.

Ready To Take The Role 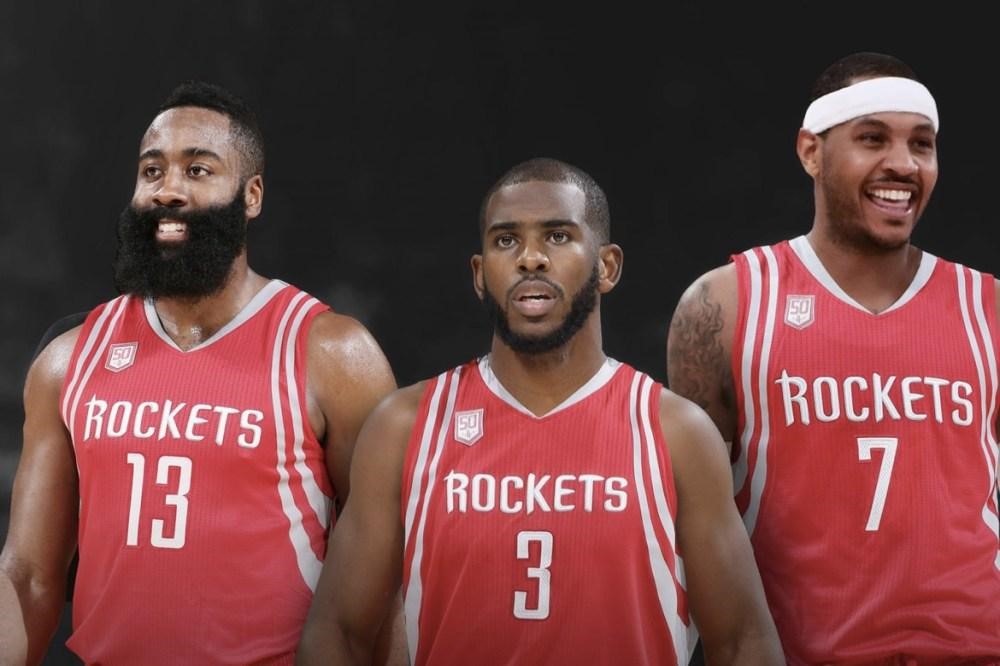 Last month , Carmelo Anthony spoke with The Undefeated’s Jemele Hill. In Hill’s article, she talked about a “pissed off Melo” having a message for, well his critics. Here are some excerpts of the piece:

One of the moments that stood out from the Thunder’s tumultuous season was Anthony laughing when he was asked if he’d ever consider coming off the bench. For some, that was just the latest evidence of Melo’s selfishness.

But Pissed Off Melo has a message for you.

“I know how to play this game of basketball,” he said. “I’ve been playing it for a long time. When I feel like I’m ready to take that role, then I’ll take that role. Only I know when it’s best for me to take that role. I’m not going to do that in a situation where I still know my capabilities and what I can do.”

“And at the end of the day, the people who really matter know my capabilities and what I can still do. You start getting to the media and debates, it’s going to always be kind of back-and-forth.”

Although it may be a strong statement, Melo never said point blank that he would still insist on a starting job in his next destination. In fact, he even says he’ll “take that role” when he is ready. However, the catch there is that he’s the only one who determines if he is ready. Well at least, he is thinking about it. 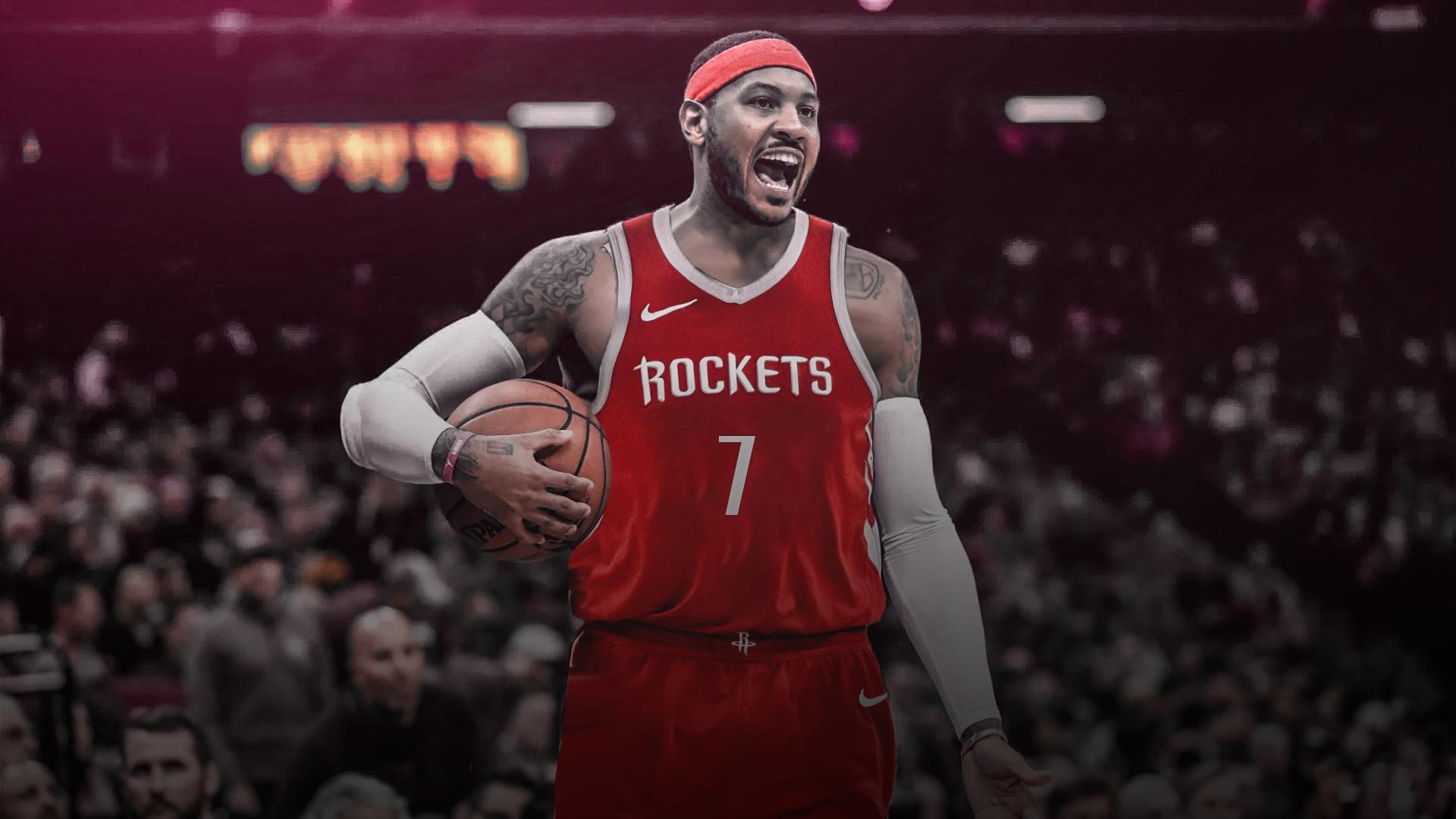 Anthony has not talked about demanding a starting role in Houston but given that he has started every single regular season game of his 15 year NBA career, it may be a given that he wants to start for the Rockets next season. Whether the Rockets would give him that job is another story. But while there is no guarantee that Anthony will start, it’s also not a given that he will come off the bench. So is he starting or not?

The Rockets lost starting small forward Trevor Ariza to the Phoenix Suns in free agency. Houston also lost Luc Mbah Moute back to the Los Angeles Clippers last summer. When you take a look at the Rockets’ current depth chart, only Gerald Green is a natural small forward.

Although he’s played four in previous season, Anthony has always been a natural small forward. That means he will be the second small forward on the team. Between him and Gerald Green, Melo is still the better player even at this stage of Anthony’s career. Having said that, there is a possibility that Anthony still starts for the Rockets, that is if he is given the opportunity to fight for that starting spot.

Adrian Wojnarowski of ESPN recently tweeted about Anthony competing for that coveted starting spot during training camp. However, Woj also added that Melo could eventually come off the bench as the ultimate decision lies on whatever makes most sense for the Rockets’ as determined by head coach Mike D’Antoni. 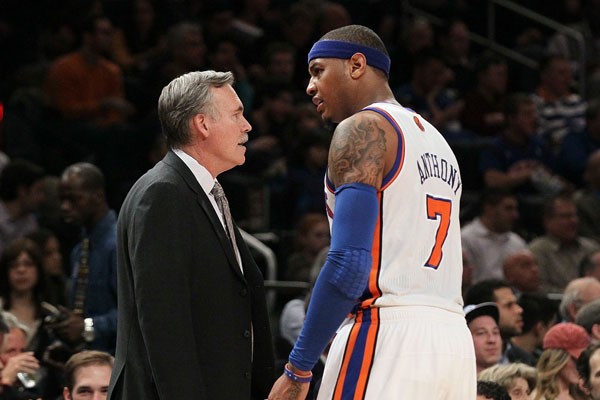 This talk leads us now to Mike D’Antoni who is no stranger in coaching Carmelo Anthony at all. D’Antonio coached Melo for two seasons in New York before the bench tactician resigned in March 2012 after the Knicks sputtered to an 18-24 start. But the thing here isn’t that D’Antoni resigned from the Knicks, it’s the reason why he did.

D’Antonio and Anthony had a falling out in New York six years ago and during an ESPN interview in 2017, D’Antoni admitted that Anthony gave the Knicks management an ultimatum to choose between the two of them. D’Antoni made it easy on the Knicks: He simply quit.

The history with D’Antoni makes us wonder if the Houston experiment is going to work for Carmelo Anthony. Sure, there are very high level professionals who put personal matters aside for the sake of winning a championship. But you can’t deny the the past. The wounds will always be there.

But in a recent interview, D’Antoni talks about Melo’s situation in Houston being entirely different. He also called Anthony a “better fit” in Houston than he was in New York. More importantly, D’Antoni also doesn’t think that working with Melo again won’t be an issue, much more a problem. 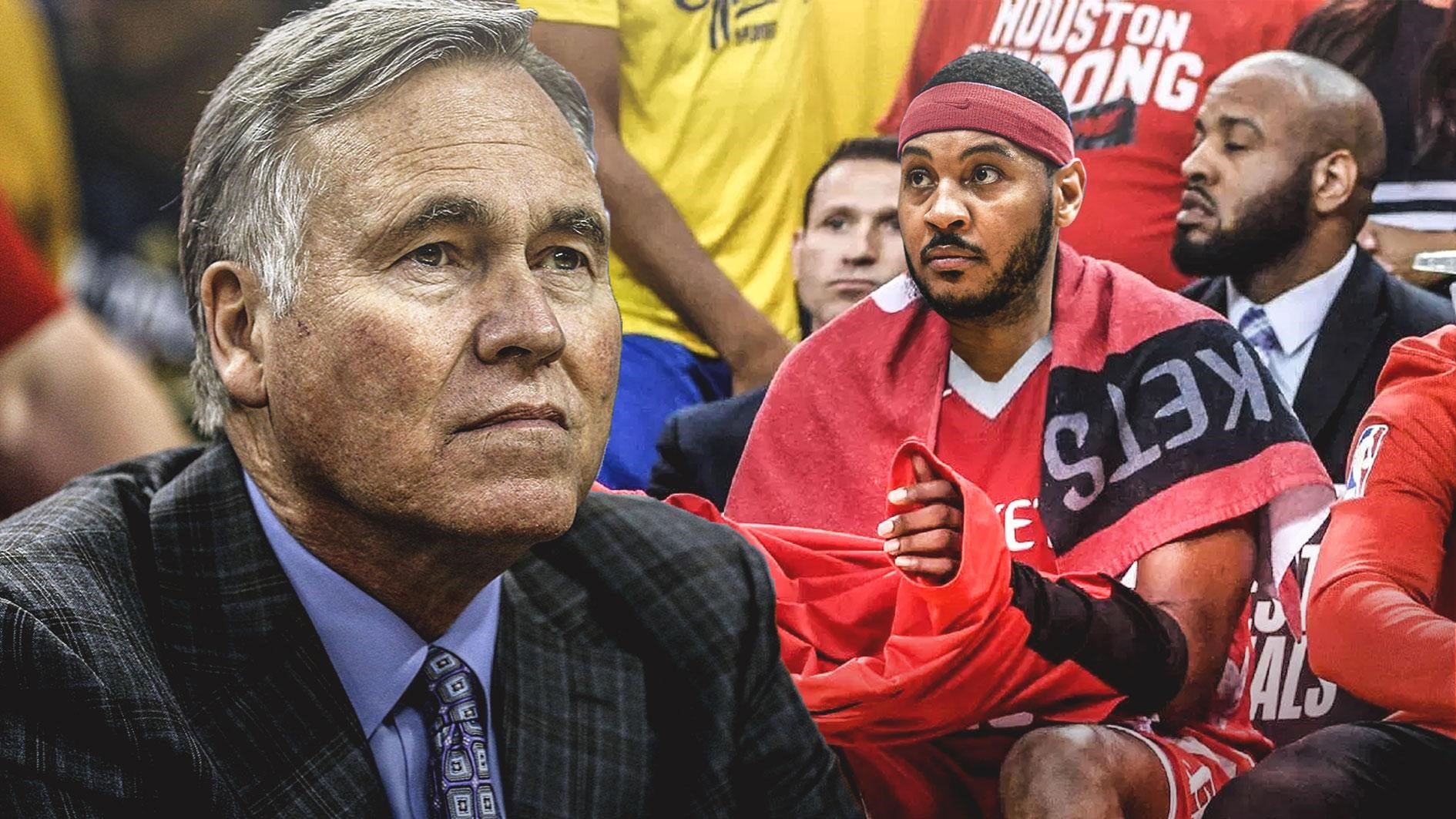 In Houston, Anthony joins a team that is centered around James Harden and Chris Paul. Anthony is good friends with Chris Paul ( banana boat brother ). Houston has a system that has been tried and tested. They got the NBA’s best record last season and were just one win away from eliminating the Warriors.

Back in New York, Anthony was the franchise player. The expectations were very high and Anthony didn’t really have the best roster to be very competitive in the playoffs much more win the NBA title. That pressure won’t be there in Houston and that might work well for both Anthony and D’Antoni.

While some say coming to Houston is just like coming to Oklahoma City last season, the circumstances with the Thunder were different. It wasn’t just Anthony who was being integrated to the team. The Thunder also had another new superstar in Paul George so Billy Donovan had to mesh not just one but two all-stars to a team with an alpha like Russell Westbrook.

In the case of the Rockets, Harden and Paul have played together for at least a full season and they have shown that they can play beautiful music together. Anthony could fit in well if he becomes the spot up shooter the Rockets lost in Ariza and Mbah Moute. So while it won’t be easy, it’s not as hard either.

So Will Melo Start Or Not? 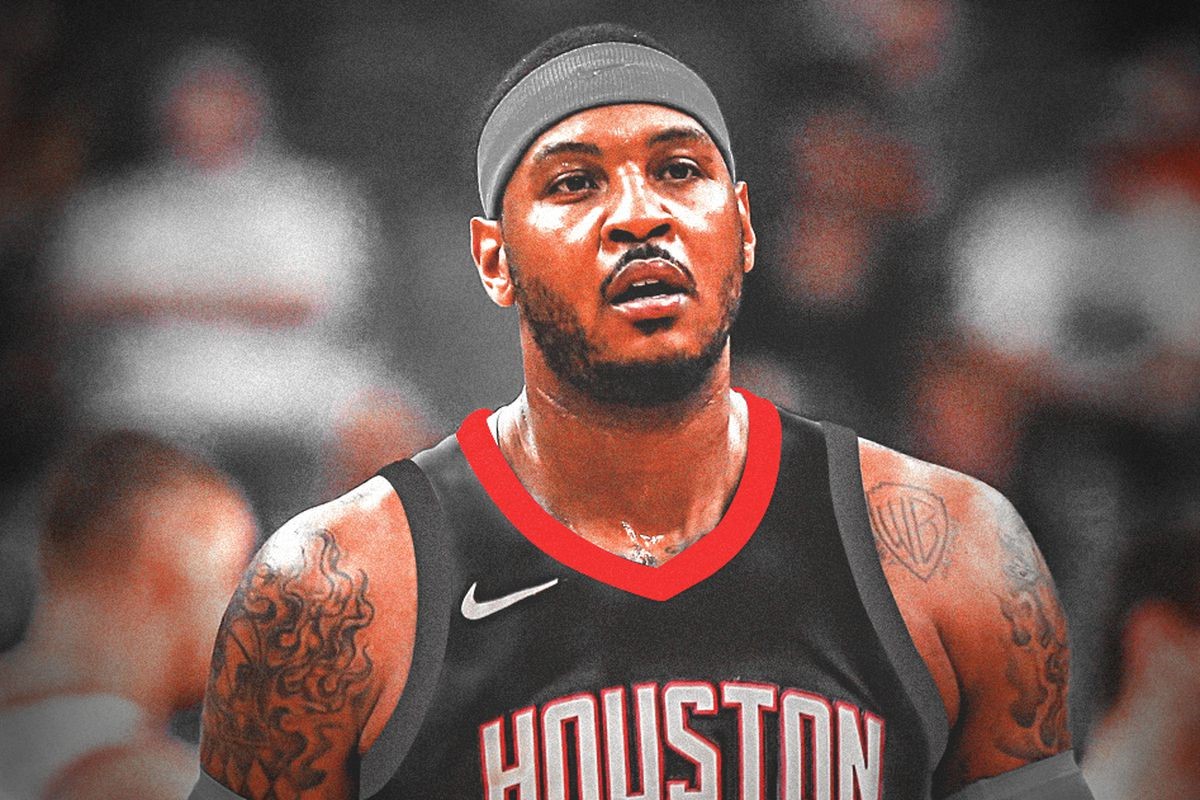 The main issue with Carmelo Anthony and the Rockets may not be integrating him to the team and making him jell with his new teammates. It could all go down to that starting five role again.When asked if Melo would be inserted in the Rockets’ starting unit, D’Antoni said:

"I don't know, and that's something that we'll have to work out," he said. "All I know is that we'll try different combos -- preseason, early season, and the good thing is that with analytics and with gut feelings and coaches and players, we'll figure out what is the best way to play.

"And again, if everybody is on board, then it'll be, 'Hey, this is where we're the best. This is how we can win the championship.' I don't know yet, but we'll make sure we get it right as good as we can."

As we said earlier, Anthony has already “opened his mind” about the possibility of taking a lesser role if he deems himself ready. That may still sound like a selfish statement but at least, he has not demanded a starting role. Well at least not yet and hopefully he won’t. But given that he is already 34 years old and that his window is almost closing, maybe Carmelo Anthony will be ready to help his team win at all costs, even if it means breaking the current longest active streak for most consecutive career starts which now stands at 1,054 straight games.