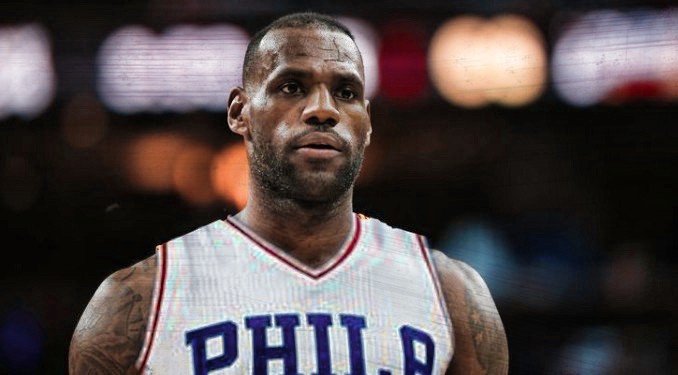 Will LeBron James Complete The Process?

Everybody knows about the 'Process' in Philadelphia. In fact, the Sixers are currently reaping the rewards of 'trusting the Process'. If all goes well, the 76ers are headed to their first winning season since 2011, their first playoff berth since 2012 and their first home court advantage in the playoffs since 2003.

It's been an exciting season for Sixers fans really. Joel Embiid has never been healthier. His second season has been so impressive that he made the All-Star team as a starter for Team Stephen. Ben Simmons, the top pick from 2017 who missed all of last season with an injury, has been stellar as the chief playmaker for the Sixers. Simmons isn't just the leading candidate for a Rookie of the Year, he is already a superstar this early.

With Embiid and Simmons leading the way, the Sixers are currently six games over the .500 mark at 32-26. They are 7th in the Eastern Conference but are a mere 2.5 games behind third ranked Cleveland and 2 games behind 4th ranked Washington. If all goes well, the Sixers could finish in the upper echelon of the East.

But if you think that the Sixers are content with reaping the rewards of the Process, think again. Philadelphia may be going all-in next summer. The Sixers are one of he rumored landing spots for LeBron James, should the Cavaliers' superstar decide to enter free agency after the current NBA season.

While the team cannot make an official pitch or comment on the matter yet due to league rules, media and fans alike have been drumming up the story. In fact, a Philadelphia-based company has already began their own recruitment process. 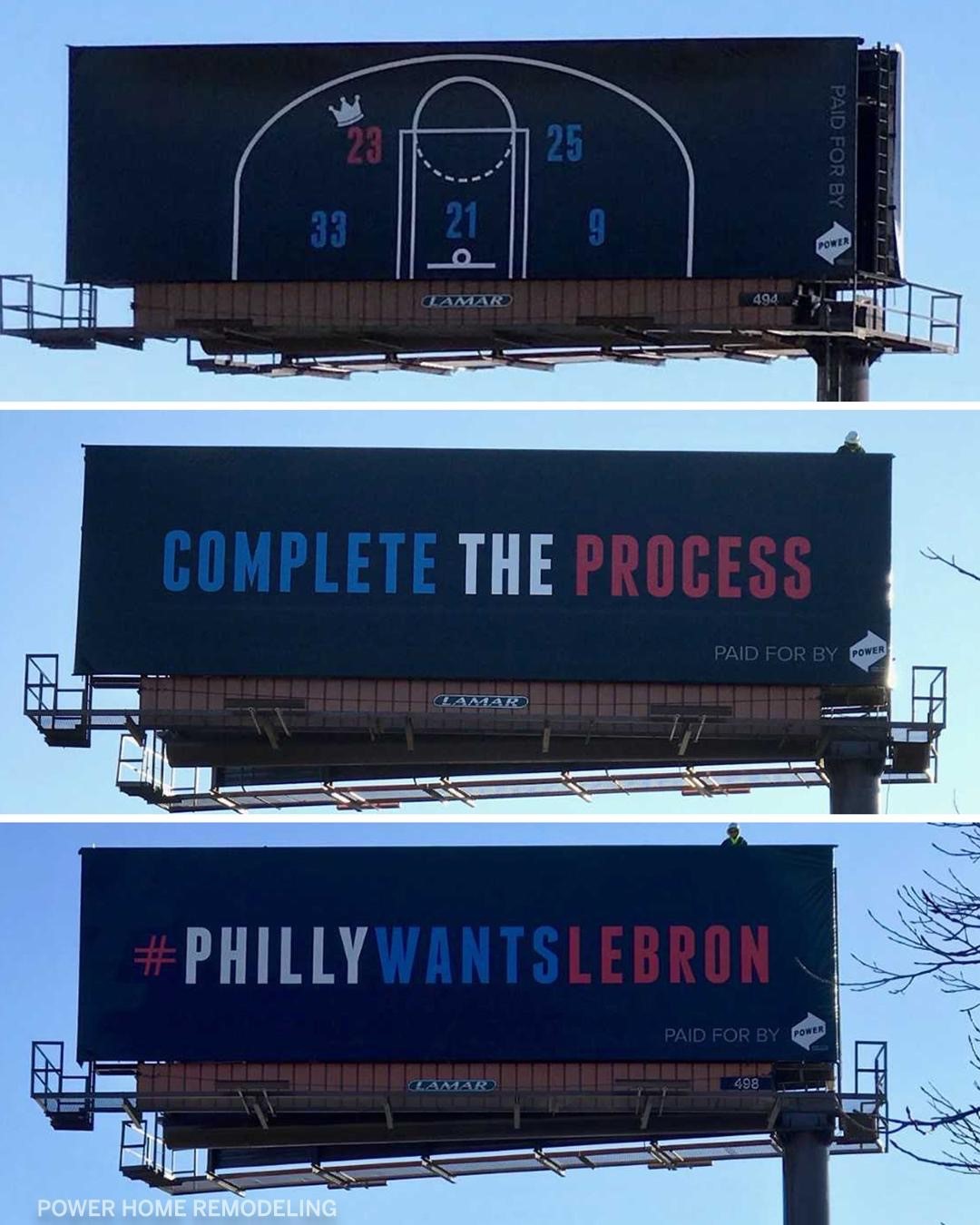 Power Home Remodeling, a company based in Chester Pennsylvania but who doesn't have an office in Ohio, has put up three paid billboards on the I-480 Highway, about seven miles from the Home of the Cleveland Cavaliers - the Quicken Loans Arena.

The first billboard has a maroon number 23 with a crown ( an obvious reference to King James ) on it on the court with the numbers 21, 25, 33 and 9 in blue. Coincidentally, those four numbers are the jersey numbers of Embiid, Simmons, Robert Covington and Dario Saric, respectively. A couple of hundred feet farther is e second billboard that reads: " Complete the Process." The third one is the most vocal. It says "#PhillyWantsLeBron."

Here’s how they look when you’re on your way to the Q: 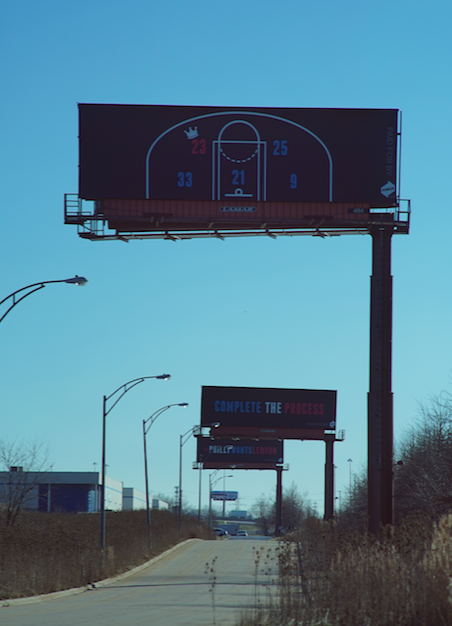 Nice work, really. Reminds us of the Academy Award nominated movie “ Three Billboards Outside Ebbing, Missouri”. But this isn’t Hollywood. This is a real life pitch to entice LeBron James to come to Philadelphia next season.

While billboards don't decide free agency, these billboards speak for themselves” Philly wants the King on board next season, or at least this group of people do.

"We're passionate about Philadelphia." Said the company's co-CEO Asher Raphael. "We have an amazing city, it's the best sports town and it's an awesome place to live. We think that the best athletes should want to play here."

"LeBron is in the conversation of being the best player of all time. We think if he comes to Philly, he gets a couple more championships."

James is no stranger to championships. Nor is he stranger to moving to a different city. In 2010, James left the Cleveland Cavaliers to pursue his championship aspirations in Miami. There, he helped the Heat win back to back NBA titles in 2012 and 2013. He returned to Cleveland in 2014 and fulfilled his promise by leading the Cavs to their first and only NBA title in 2016.

Philadelphia is just one of the rumored landing spots for LeBron. Not only does Philadelphia present a promising line-up that could help him win at least one more NBA title, it also has the financial flexibility to sign him as a free agent. Aside from the Sixers, these are the teams that are currently to be eyeing the King's services if he chooses to become a free agent: 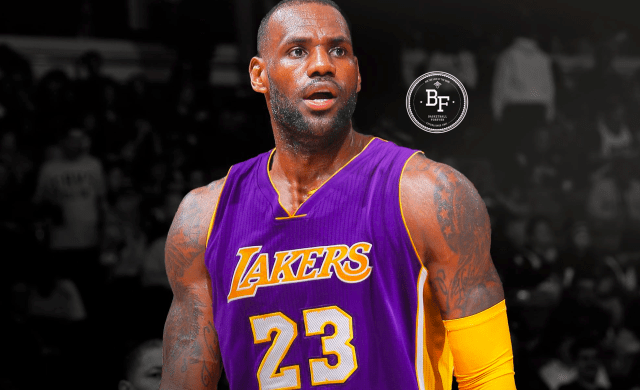 The talk linking James to LaLa Land is the most persistent one. Not only did LeBron call L.A. 'Home' in a social media post, he also has a house in Los Angeles. Remember the time when Bron and Savannah were seen checking out an exclusive high school in Los Angeles? The glitz and glamor of Los Angeles would fit the King. A star as big as he is belongs in a big stage. L.A. is the biggest stage out there.

The Lakers have made known their intentions to land one or two max free agents this coming summer or the summer of 2019. They have started shedding salaries by trading Jordan Clarkson and Larry Nance Jr. Already, the Lakers can afford one max free agent this coming summer with just over $34M in owed salaries for next season. A few more moves and they will be ready to take a second one. Getting a second star should help the King make his decision. As long as the Lakers can add two, LeBron isn't a far fetched possibility. 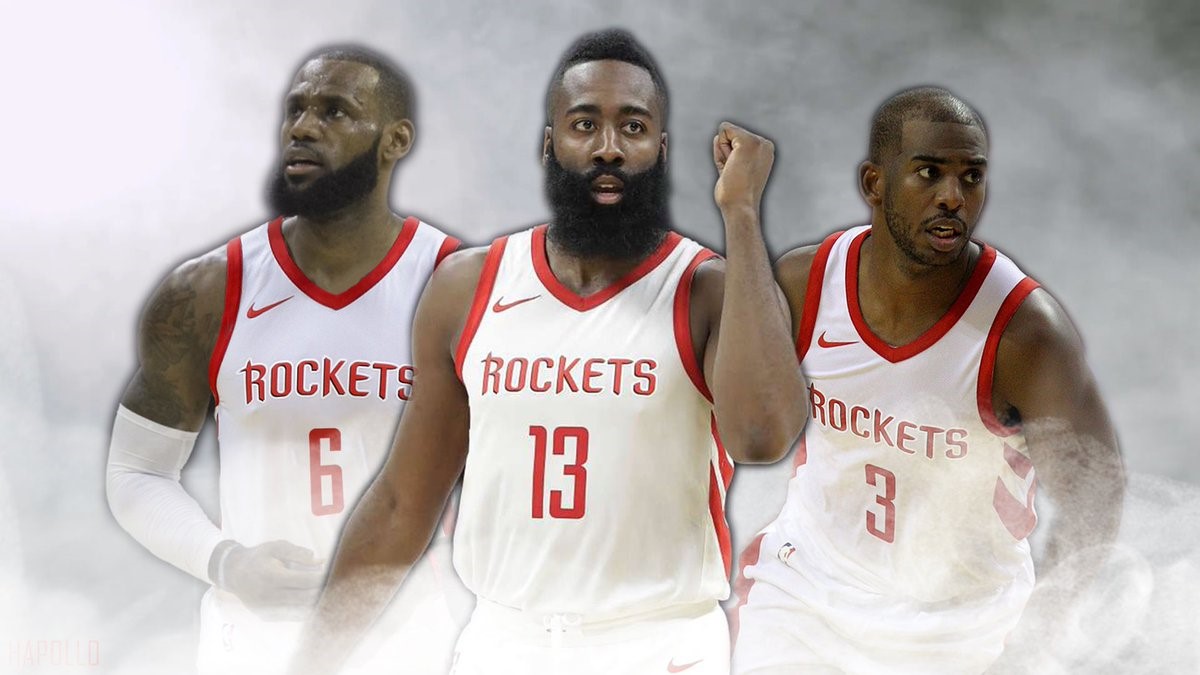 The Rockets aren't a stranger to making big moves. They added Chris Paul last summer by trading half of their roster. With banana boat brother Chris Paul in Space town, James may find Houston interesting. A trio with James a Harden make a deadly core.

But the Rockets don't have cap space so they need the King to opt in first and then work a trade from there.A package centered around Eric Gordon and Ryan Anderson could be made, enabling the Rockets to keep majority of their current line-up. Losing Gordon and Anderson isn't easy but it's a price to pay for the King's ransom. 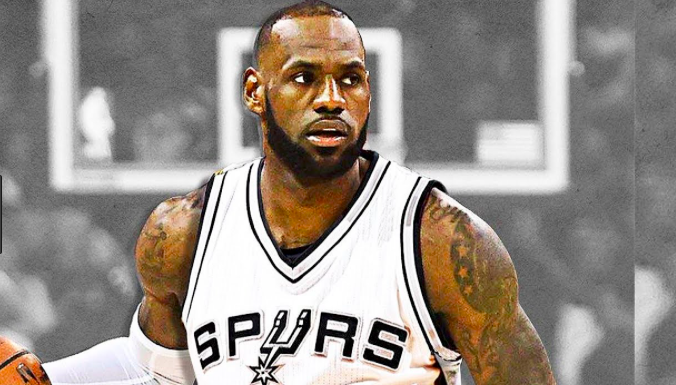 This may sound odd, but yeah it's a possibility. James and Gregg Popovich have met in the Finals before and they have mutual admiration for each other. Look, it sounds odd to hear James playing for the Spurs but if he wants to prolong his career long enough to be the NBA's all-time leading scorer, this is the place to go. Pop is the master of minutes and if you're wondering why Manu is still strutting his stuff at 40, it's because of Pop's system.

Getting LeBron won't be easy. If they sign him outright, that should mean trading Pau Gasol, letting go of Tony Parker and hoping Rudy Gay and Danny Green don't opt in. That's a tough series of event to happen one after the other. But if LeBron opts in, the Spurs can work a trade centered on LaMarcus Aldridge. Or maybe trade Kawhi Leonard Mano-e-Mano for the King. Why not? There are rumors of disconnect between Kawhi and the Spurs. With Leonard opting to sit out despite being medically cleared, there may be something going on in San Antonio. This opens the possibility of trading Kawhi. 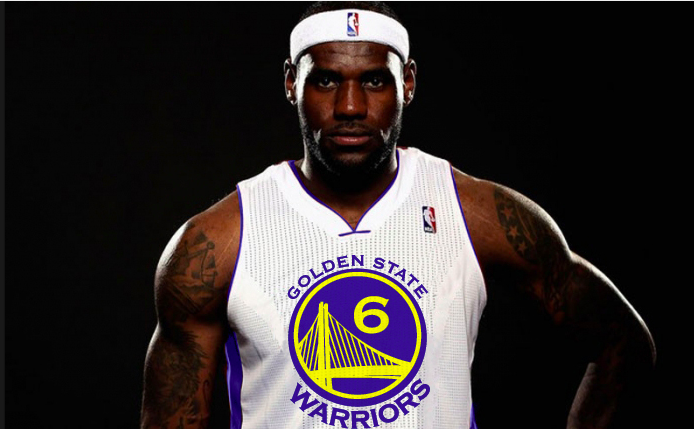 Sounds too good to be true, really. But this rumor heated up a while when it was reported that James was open to discussing options with the Dubs. Adding LeBron James would make them the super team of super teams. But it would have negative impact on James' legacy, or so his critics say. As with Durant, critics will say it is going to be a lame move and that he chose the easy way out.

Making this move isn't easy either. The Dubs will need James to opt in and then assemble a trade package. They will have to let go of either Klay Thompson and Draymond Green plus Andre Iguodala. This would mean breaking the Warriors' championship core and adding another Alpha in LeBron James. It's doable yes, but not likely. The Warriors would love to add the King to their team. But they really don't need him to win the title.

Staying In The Land 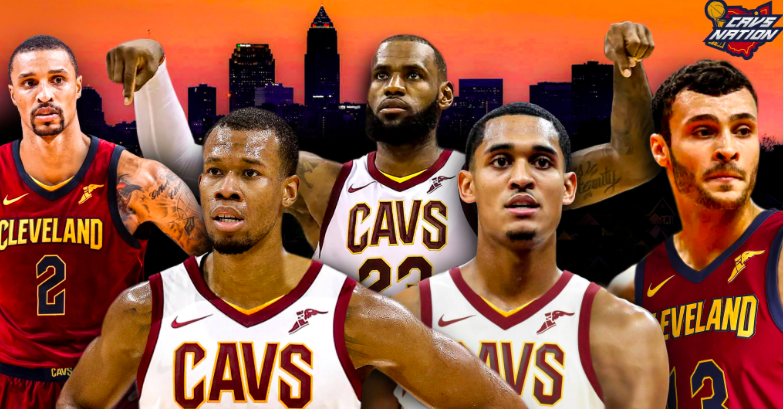 Despite these five teams, there is still a chance that LeBron opts in and decides to stay with the Cavs. With the younger blood infused at the trade deadline plus the return of Kevin Love, the Cavs still have a formidable crew. Yes, they are struggling right now but as Tyron Lue says, they have to learn on the fly with the playoffs just around the corner.

How they finish the season and do in the playoffs is going to be key for LeBron staying. At 32, James isn't interested in being part of a rebuild. He's all about winning titles now more than anything else. And for sure, he won't be shy to leave to achieve that. After all, he's left twice before and there's no reason for him not to do it again. If he does, expect the Lakers and Rockets to be among the most interested ones. San Antonio is a far possibility and the Warriors are almost just a dream.

But yeah, don't count out the Sixers. Admit it, you laughed at the Process when Embiid was injured for two seasons. But the Sixers stuck with their plan. Now “Trust the Process” has become a household phrase. #CompleteTheProcess could be next.