Will The Tandem of Chris Paul and James Harden Work for Houston? 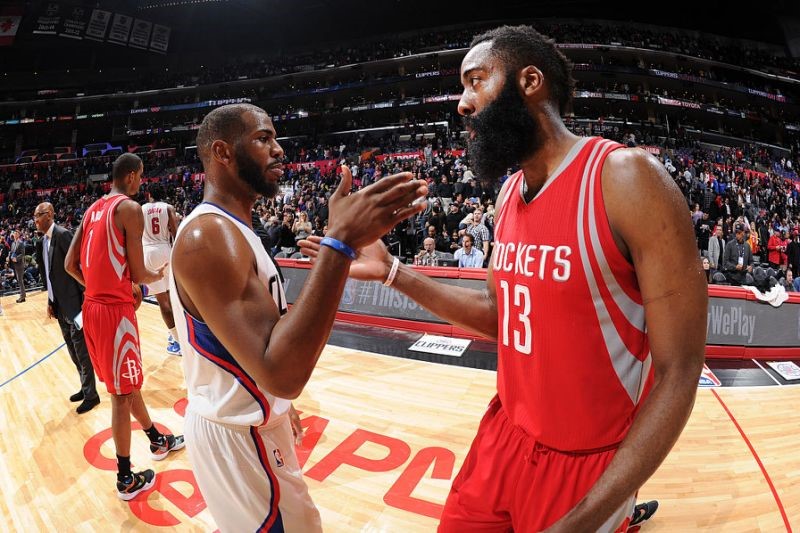 With the buzz currently centered on Kyrie Irving’s trade request, the Houston Rockets’ new superstar tandem has started the process of marriage, basketball marriage that is.

The addition of Chris Paul to the Houston Rockets remains as the biggest free agency move of this year’s offseason. And while training camp is still two months away, Paul and the Rockets’ staple star James Harden have already started playing with each other.

The two were recently filmed playing pick up ball in Los Angeles with Rockets’ teammate Trevor Ariza and free agent Javale McGee ( who last played for the Golden State Warriors ). The video was uploaded in Instagram by YouBall Training:

In the video, Harden and Paul are seen taking turns in running the offense. Both looked very comfortable being the playmaker: dishing off with a dime or creating the shot for himself. This is just pick up basketball but it does show that the two superstars can play together in one offense. Now this is important because when the CP3 trade was made, the first question people asked was how are two ball dominant superstars going to co-exist?

James Harden’s primary value lies in his ability to score points. But last season, Houston Rockets’ coach Mike D’Antoni unlocked the best version of James Harden yet. Not only did he put up the points for the Rockets, Harden also became the team’s primary ball handler and chief playmaker. The results were impressive.

The Bearded One led the Rockets with a league best 11.2 assists per game, his best assists average in his career. Harden also had career highs in points and rebounds last season and finished 2nd to Russell Westbrook in the NBA MVP balloting. As a team, the Rockets finished with the 3rd best record in the NBA and advanced to the Western Conference Semifinals for only the third time since 2008.

But after how dominantly the Warriors won the title last season, Houston knew it needed to get better. Much better. To do that, they had to make a splash in the 2017 free agency. And that’s exactly what they made: a huge splash.

The Rockets landed the league’s best point guard in Chris Paul via a trade with the Los Angeles Clippers. In exchange, the Rockets only gave up minimal assets, led by starting PG Patrick Beverly. Sure, Beverly’s defense and tenacity would be missed. But Chris Paul is a once in a lifetime talent.

After six seasons with the Los Angeles Clippers, Chris Paul decided to walk away. Paul led the Clippers to the playoffs each year but he wasn’t able to take them to the land of promise. The Clippers never made it past round two during Paul’s six seasons there. With frustration piling up and CP3 not getting any younger, he decided to take his championship aspirations elsewhere

Paul is considered as the best point guard in the NBA today. His playmaking skills are second to none. Paul led the NBA in assists four times and has been the league’s steals leader in six seasons. CP3 is a 9-time NBA All-Star and a 4-time member of the All-NBA first team. When he said he wanted to play with James Harden, the Rockets wasted no time in making a deal to bag him.

Not Easy As It Looks

But if you think adding the best PG to the NBA’s 3rd best team last season would yield an instant super team, think again. A marriage between James Harden and Chris Paul looks fantastic on paper. However, if you take a closer look at their respective games, you’ll find out that it’s not going to be an easy merger.

As we said earlier, the main concern about this duo is the fact that both players love to have the ball in their hands. For them to be a dynamic duo, something has to give. That’s easier said than done. Aside from that, Chris Paul’s style of play doesn’t seem to match the Rockets’ offensive philosophy. The Rockets were a three point shooting team last season while Paul’s style of play is centered on his mid range game. Let’s talk about both.

During the 2016-17 NBA season, James Harden and Chris Paul were in the Top 10 for touches, front court touches and time of ball possession. This is what we meant when we said that they are ball dominant players. They are most effective when the basketball is in their hands. Problem is, there is only one ball.

Chris Paul has started at PG for all his life. James Harden’s first season as PG was a resounding success. In the video we showed above, we saw both take turns in running the offense. When one is bringing the ball up front, the other played off ball without any hitch. But what happens when the game is on the line during the regular season? Who will execute the play?

Chris Paul is the king of the mid range game. 42% of the shots Paul has taken in the last three years have been from the mid range. His 48.5% accuracy from that distance ranks only 2nd to Kevin Durant’s 48.7%. On the other hand, mid-range wasn’t really in the Rockets’ vocabulary last season with only 11% of their total shots coming from that distance.

For the Rockets, scoring came from three pointers, points in the paint or points from free throw shots. Paul averaged 3.8 mid range shots per game last season, the same average the Rockets had as a team. After the All-Star break, CP3 took 149 mid range shots. As a team, the Rockets only had 147 during the second half of the season. The Rockets shot an all-time high in three pointers last season. They were dead last in 15-19 feet shots. Which shot will D’Antoni use as his main weapon?

The Houston Rockets were third in pace last season with 102.54 possessions per game during the 2016-17 offense. But while the Rockets played at a torrid pace, the Chris Paul led Clippers played a more deliberate offense with a pace of 98.22 or 17th in the entire NBA. The Rockets averaged 115.3 points per game while the Clippers only scored 108.7 per outing.

If Houston was a sprinter, Los Angeles ( Clippers ) was a surgeon. The Rockets excelled when they were on the loose, running the break and making transition baskets. The Clippers on the other hand loved to play the half court game and took good care of the ball. They were in the bottom 10 in the NBA for most turnovers. Houston’s frenetic pace put them in the Top 10 in turnovers committed. Which style of play with the new Rockets run?

Don’t get me wrong. These don’t diminish the Chris Paul acquisition. These are just challenges they will have to address as the season progresses. Knowing Mike D’Antoni, he already has the solutions to these. We’ll just have to wait for the regular season to find out what they are.

As Rockets’ GM Daryl Morey said, the NBA is now an arms race. You won’t get far if you don’t have enough firepower. The Rockets have definitely improved very much with the addition of Chris Paul. Whether CP3 will be enough to make the Rockets compete against the Warriors remains to be seen. If Carmelo joins them there though, that would be another interesting story.