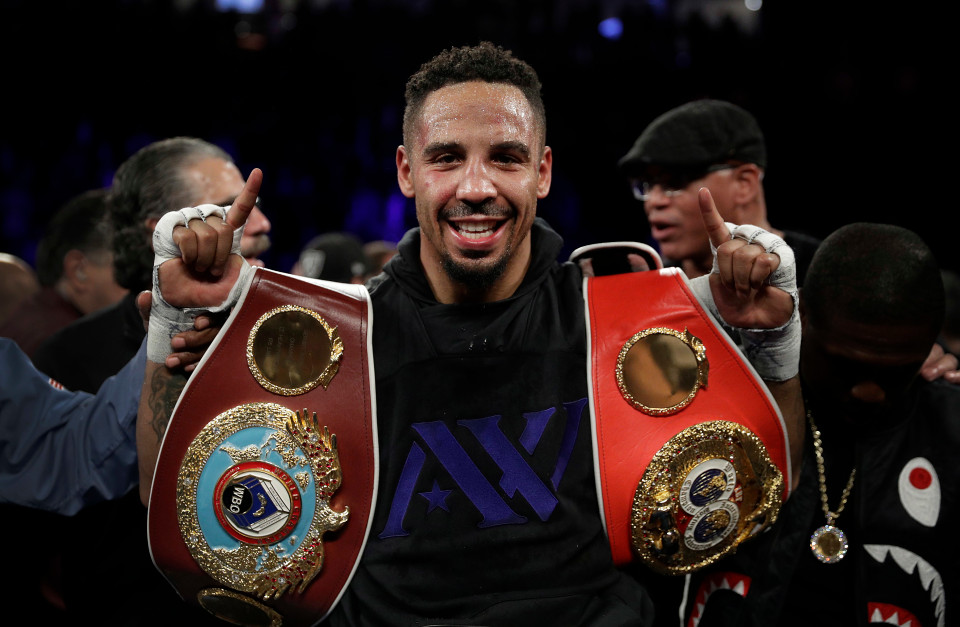 With No More Desire, Andre Ward Calls It A Career

Juan Manuel Marquez, Timothy Bradley, Robert Guerrero and Miguel Cotto are among the prominent boxers who have announced their retirement earlier this year. But as if four big names aren't enough for 2017, unified light heavyweight champion Andre Ward has added his name to the list.

On Wednesday, Ward announced his retirement from boxing . It was rather surprising because Ward was coming off the two biggest wins of his career. Ward said in his website that he had lost the desire to continue fighting:

"To the sport of boxing—I love you. You've been by my side since I was 10-years-old. You've taught me so much. You've humbled me. You've promoted me. I've sacrificed a lot for you, but you've given me more than I ever thought possible. You gave me a platform, made me a champion and helped me provide for my family. I am forever grateful to you. You and I will always be synonymous, connected at the hip. Thank you for all the wonderful people I've come in contact with because of you. I've made friends for life. As I walk away from the sport of boxing today, I leave at the top of your glorious mountain, which was always my vision and my dream. I did it. We did it.

"From the bottom of my heart, thank you to everyone who has played a part in my journey. You know who you are. I could not have done this without you. I want to be clear—I am leaving because my body can no longer put up with the rigors of the sport and therefore my desire to fight is no longer there. If I cannot give my family, my team, and the fans everything that I have, then I should no longer be fighting. Above all, I give God the Glory, for allowing me to do what I've done, for as long as I have."

The San Francisco native finishes his career with a record of 32-0 with 16 KOs. The 2011 BWAA Boxer of the Year retires as the current WBA, IBF, WBO and Ring Light Heavyweight champion. He won those belts by knocking out Sergey Kovalev last June. Ward is currently ranked by Ring as the #1 Pound for Pound Fighter in the planet.

In all, Ward won a total of eight world titles in two different weight classes. Ward was given the Comeback of The Year award by Ring Magazine in 2016 after successfully returning to the top of the game after years of sporadic fighting. Ward retires undefeated as a pro and not having lost a bout, whether amateur or pro, since he was 13 years old.

After winning the 2003 U.S. Amateur light heavyweight title, Ward captured gold at the 2004 Athens Olympics in Greece. Ward became the first American boxer to win an Olympic gold medal in eight years. Since then, the only American to win boxing gold at the Olympics is female boxer Claressa Shields.

Ward began his pro career as a super middleweight. After racking up twenty consecutive wins, Ward would enter the Super Six Boxing Classic, a tournament that would determine the best super middleweight in the world. That tournament would propel Ward to superstar status.

Ward would win the WBA super middleweight title during his opening bout of the tournament. Ward scored a unanimous decision over erstwhile champion Mikke
Kessler. Ward would go on to beat Carl Along the way, Ward beat world class fighters like Alan Green, Saiko Bika and Arthur Abraham.

Ward would fight only once in 2012 after suffering a broken hand during the a Super Six World Boxing Cup. Ward stopped Chad Dawson in ten rounds during his first title defense. What followed as a period of hiatus due to a contract dispute with promoter Dan Goosen.

The contract dispute compounded Andre Ward's injury problems. Ward fought only once in 2013 and then sat out the entire 2014 fighting Goosen in court instead of challengers inside the ring. Ward would get stripped of his titles for inactivity. Goosen died in September 2014 and an undisclosed settlement was reached a month after. Ward would end resurrect his career under rapper Jay-Z's Roc Nation Sports promotion.

By the time his legal woes were over, Andre Ward was already 31. Not only did he lose majority of his prime years, he had missed out on many million dollar fights. He put his career on the shelf while it was on its peak. Still, he was determined to reclaim his rightful spot in the sport that he grew up with.

Moving Up in Weight

In October 2015, Ward signed a three fight deal with HBO. Under the agreement, Ward was to move up and fight at 175 pounds. The third and culminating bout of the contract would be the highly anticipated showdown with unified light heavyweight champion Sergey Kovalev.

Ward came back from a second round knockdown to defeat Kovalev via razor thin unanimous decision. All three judges scored the bout 114-113 in favor of Ward, although many fans and media personalities thought Kovalev won. Despite the controversy, the fight was very close and could have gone either way. To settle the dispute, an immediate rematch between the two was set.

The second fight was just as closely contested as the first one. But in the eight, Ward hurt Kovalev with a rig hand. Sensing he had Kovalev hurt, Ward unloaded a series of body shots that appeared either low or borderline. Krusher slumped in a corner forcing referee Tony Weeks to stop the bout.

Once again, Ward defeated Kovalev. But while the stoppage was equally controversial as the decision of the first bout, this was more definitive. Ward had Kovalev legitimately hurt and while Krusher argued he could have continued, he was receiving enough punishment to warrant a stoppage.

Ward's second victory over Kovalev asserted his claim as the best pound for pound boxer in the planet. Three months earlier, Roman ' Chocolatito ' Gonzalez lost to Srisaket Sor Rungvisai. With that defeat, Ward was effectively crowned as the top pound for pound fighter in the world. But after defeating Kovalev, it appeared that there was nothing left to conquer.

Some quarters say Ward left too soon and should've fought Adonis Stevenson first.. But it's not about Stevenson and it’s not about what other people say. As Ward said, it's about not being able to give the fans his 100%. Ward has never backed away from any challenge in the past. But when the body says no more, Father Time is always unbeatable.

What Ward is doing is going out on his own terms. This is something many of the greats before him couldn't do. Ward retired on top of his game and on top of the sport. With his legacy complete after beating Kovalev in their rematch, there was nothing more to prove.