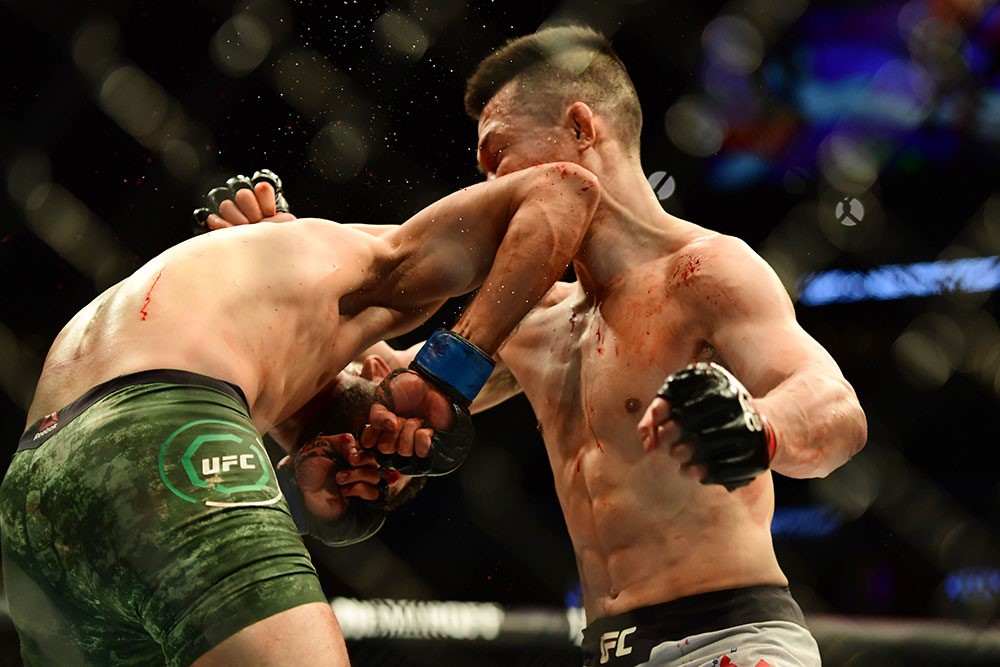 The UFC celebrated the 25th anniversary of its first ever event on Saturday in the same city where it all began. Held at the Pepsi Center in Denver, Colorado, UFC Fight Night 139 lived up to its hype and provided a night of exciting fights and finishes worthy of celebration.

In the co-main event, Donald “Cowboy” Cerrone submitted former teammate “Platinum” Mike Perry by breaking his “platinum” arm in a spectacular armbar finish in the closing seconds of the first round of their fight. But more thrilling than that, Yair Rodriguez delivered what is probably the most dramatic finish we’ve ever seen in MMA, not just the UFC.

Rodriguez defeated the Korean Zombie via knockout with just one second left on the clock. The stoppage at the 4:59 mark ties the UFC record for latest finish in promotion history set by former UFC flyweight champion and now One Championship fighter Demetrious “Mighty Mouse” Johnson who finished Kyoji Horiguchi via armbar at UFC 186 in 2015. But while Mighty Mouse was clearly ahead in that fight when he recorded that record setting finish, Rodriguez was on the losing side of the fight when he stopped the Korean Zombie.

The MMA Junkie’s John Morgan tweeted a photo of the judges’ scorecards for the Korean Zombie vs Rodriguez bout and revealed that two of the judges had Chan Sung Jung ahead 39-37 and another had the fight a 38-38 tie heading into the fifth and final round. With the fifth round almost even before the up-elbow occurred, the Korean Zombie clearly had the fight in the bag when he was knocked out cold. Tough luck, really. As he said in his only interview after the loss, Jung said he felt “embarrassed”.

As for Rodriguez, it was a spectacular move from one of the most creative strikers in the history of the game. Rodriguez is known for his striking, athleticism and unorthodox strikes that catches his opponents off guard. On Saturday night, he turned in what is probably the most spectacular strike he’s ever landed.

After ducking a series of punches from an attacking Korean Zombie, Rodriguez ducked under and threw an up-elbow which landed flush on Jung ang immediately put him out cold. It was one of the weirdest elbow finishes we’ve ever seen and UFC President Dana White went on to say that it was the craziest finish he’s ever seen in the sport. Said White:

“Craziest finish ever,” an excited Dana White said, per MMA Junkie’s Mike Bohn. “There was one second left on the clock when he landed that elbow, and Yair was losing 4-to-1. ‘Zombie’ had the fight in the bag, he had one second to go and, wow, what a finish.”

Dana White’s a guy who exaggerates on plenty of things and lies on many. But I think he’s spot on with this one. El Pantera’s last second finish of the Korean Zombie wasn’t just dramatic, it was probably the craziest finish we’ve ever seen.

But while it may have been the craziest, it was surely not the only crazy finish the UFC has seen. Here are some of the most notable crazy finishes we’ve seen in the UFC’s 25 year history:

This one happened just recently so you might still remember. With Alexander Volkov virtually winning every round of the fight, Lewis caught Drago with a thunderous right hand that instantly put the Russian down with Lewis finishing him off with ground strikes. Volkov won the first two rounds of the fight and was likely ahead in the third when Lewis summoned the gods and miraculously landed that right hand that gave him an instant title shot against Daniel Cormier.

Conor McGregor was at the height of his powers. He had just beaten Chad Mendes for the interim featherweight championship. The UFC then booked him to face reigning featherweight kingpin Jose Aldo in a title unification, with the winner becoming the undisputed featherweight champion. Aldo was supposed to be the biggest test of McGregor’s career at that time. Instead, the Irishman needed only one left hand punch in 13 seconds to knock out the longtime Brazilian champion. After the fight, McGregor then came up with his now his iconic quote of “timing beats speed and precision beats power”.

Dan Henderson and Michael Bisping were opposing coaches at The Ultimate Fighter Season 9 with Hendo coaching Team USA and the Count as head coach of Team UK. As with the TUF tradition, th coaches from opposing teams would square off in the finale. For The Ultimate Fighter 9, the coaches fought each other at UFC 100, which was at that time the landmark event of the promotion being its 100th event. The two engaged in a fierce first and second rounds when Hendo landed one of his iconic H-Bombs that put the brash Englishman on the canvass for good. The loss was Bisping’s first knockout loss and the image of Hendo knocking out Bisping became Henderson’s official logo. Talk about a double black eye.

Anderson Silva is one of the greatest mixed martial artists of all-time. Some even say he is the GOAT of MMA. There was a time when Silva reigned for a record 2,457 days from 2006 to 2013 and made a record 16 successful title defenses over that period. But Silva’s sensational streak came to a crashing end at UFC 12 against Chris Weidman. Silva began the bout with his usual mind games to throw off his opponents. It worked in round one as Silva was able to avoid damage while picking Weidman apart with his elite striking. In round 2, the clowning began and Weidman caught Silva with a punch that dropped him to the mat. The All-American finished off Silva with ground strikes to produce one of the most stunning upsets of all-time.

Like in the case of Anderson Silva, Ronda Rousey was a massive force in her own weight class with no opponent coming close to beating her. Rousey won her first 12 MMA bouts, winning 9 by armbar submission and three by knockout. She had 7 consecutive successful title defenses ( including 1 from Strikeforce) heading to her UFC 193 bout with Holly Holm. But in front of the biggest audience in UFC history in Australia, former world champion boxer Holly Holm outstruck Rousey in the first round of their title fight and then knocked out the then unbeaten champion with a stunning leg kick that caused her to face plant on the mat. Rousey never recovered from that loss. After another KO loss to Amanda Nunes, Rousey retired and joined professional wrestling company WWE.