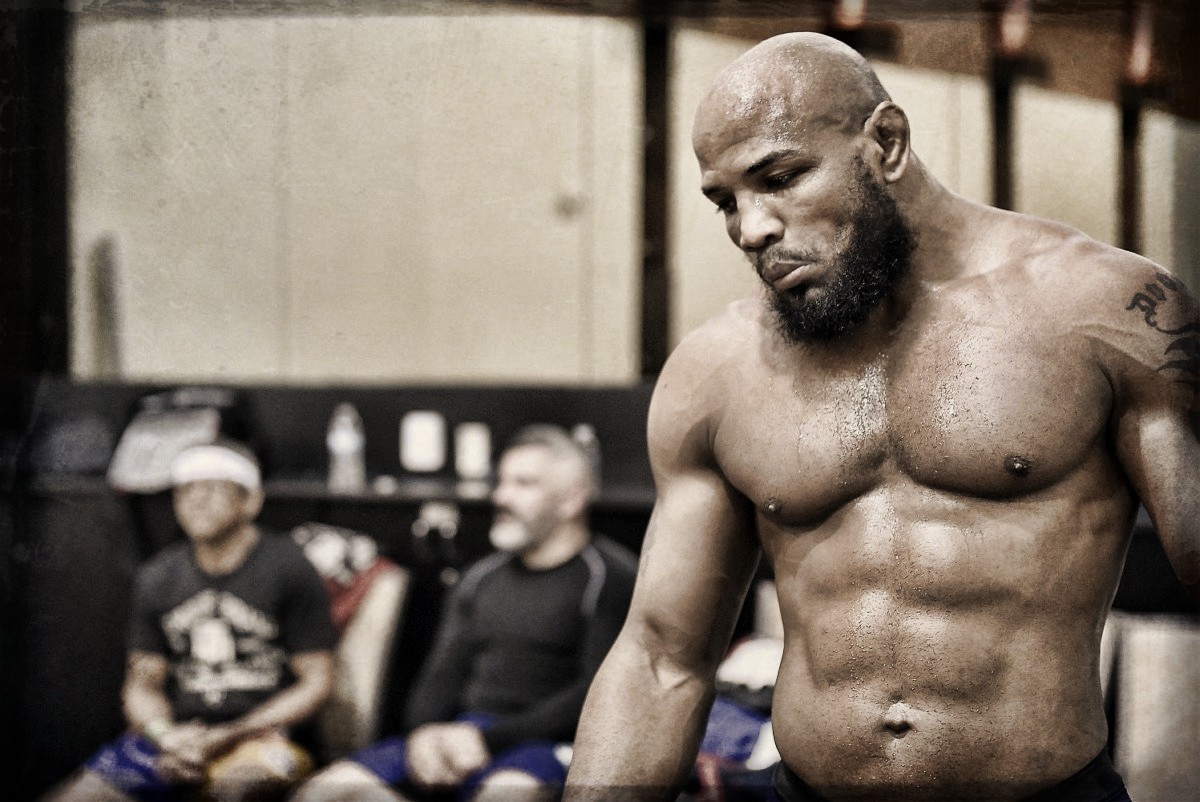 It has been an up and down week for Yoel Romero.

The former Olympic freestyle wrestling silver medalist went 2.7 pounds over the UFC middleweight limit during Friday’s weigh-in and missed the chance to become the interim UFC middleweight title. And as a consequence for failing to make weight, Romero was forced to give up 30% of his purse to his opponent, Luke Rockhold. Then he went on to face Rockhold on Saturday night, in a championship fight where only Rockhold had the chance to win the belt.

Those did not bring Yoel Romero down. Instead, he put down Luke Rockhold in the third round of the main event of UFC 221 at the Perth Arena in Perth, Australia. Romero blasted Rockhold with a powerful left hand that sent the American awkwardly sitting on the side of the fence before following it up with an equally brutal punch that ended the night for the American Kickboxing Academy standout.

With the win, Romero became the first fighter in UFC history to win a title fight without going home with the title itself. As if that wasn’t enough, Romero suffered an apparent leg injury during the fight as he was unable to stand up during the post fight octagon interviews. He also had to be assisted on his way out of the octagon.

But while the lows were more than the highs, it was the biggest victory of Yoel Romero’s career. And it came at a time when he was being questioned because of his age and the way he ran out of gas in his most previous fight. But Romero proved that age is just a number and that power doesn’t grow old.

"I'm so sorry for Robert Whittaker," Romero said immediately after his win. "He is the guy, but this is the plan of God. Second, I'm so sorry for the weight cut. This was the first time in my career I could not get my body down. Rockhold is a very good athlete and an amazing fighter. ... I'm very happy because I fight this time with the best."

Rockhold called Romero’s botched weight cut ‘typical’ but for the record, it was the first time in the Cuban’s MMA career that he’s missed weight. However, he was suspended by the USADA for six months in 2016 for a failed drug test in that was blamed on a tainted supplement. Still it wasn’t Romero’s extra weight or not so clean history that mattered here. It was his buzzsaw speed and otherworldly punching power.

Rematch With The Reaper

After the fight, UFC President Dana White confirmed that Romero will be the next challenger to Robert Whitaker once the UFC middleweight champion is all healed up. Whitaker was supposed to defend the belt against Rockhold in Saturday’s event, the reason it was booked for Perth, Australia, Whitaker’s home country.

But Whitaker suffered a series in injuries and illnesses that led to him being pulled out of the event. The 27 year old Australian pulled a hamstring in training before battling a serious staph infection that spread to his stomach. As if those weren’t enough, Whitaker also suffered from chickenpox during the lead up to the event.

Romero was slated to face Robert Branch at a UFC on Fox 28 on February 24, 2018 but was removed from that event in order to take Whitaker’s slot at the UFC 221 headliner. Romero was coming off a loss to Whitaker for the interim title at UFC 213 last July 8, 2017. Whitaker beat Romero and was promoted to full champion status after Georges St. Pierre decided to vacate the title 31 days after beating Michael Bisping at UFC 217.

Learning From His Mistake

Prior to the loss to Whitaker, the 40 year old Romero had never lost inside the UFC octagon dating back to 2013. He won eight fights in a row, with six of those bouts ending in knockouts. At UFC 205, Romero earned Performance of the Night honors after knocking out former UFC middleweight champion Chris Weidman in three rounds.

Against Whitaker, Romero appeared to be on his way to winning UFC gold. He won the first two rounds of the fight before running out of gas and getting outstruck as the fight went on and Whitaker got his rhythm going. Romero lost the bout 48-47 across all scorecards despite outstriking Whitaker 114-94 in total strikes landed and taking the Aussie to the ground on 4 of 18 instances.

There were no signs of Romero fading against Rockhold as it looked like he learned from his mistake. He was efficient with his strikes and never attempted to take Rockhold to the ground a single time. Romero landed 52 out of 99 total strikes and 12 of 15 leg kicks that slowed down Rockhold’s own kicking arsenal.

In the end though, it was punching power that mattered as Romero needed only one punch to put Rockhold down and another to end the fight. Rockhold was by far the better all-around fighter between the two but against a hard hitting puncher like Romero, it was Rockhold’s chin that failed him yet again.

The loss sends Rockhold to his fourth career loss. All of his losses have been by knockout. Three of his last four bouts have been title fights and he’s 1-2 in those. Rockhold lost his belt after getting caught with a punch from Michael Bisping at UFC 199. All the former 185 champ could say after the fight was that Yoel Romero was made of steel.

Steel because Romero packs steel hard punches and he also has a granite chin. But call it a steal to because this was supposed to be Rockhold’s redemption fight. Instead of getting back his belt from Whitaker, the Aussie was forced out of the fight. Instead, Romero is now getting a second crack at Whitaker when the champ returns.